Print 🖨 PDF 📄
The Carrick-A-Rede rope bridge is one of the most iconic and stunning attractions in Northern Ireland and the Causeway coast. It offers a thrilling crossing over the crashing waves 100ft below to the tiny island of “Carraig a’ ráid, it delights with it’s jaw dropping beauty and takes your breath away with its exposed position within the heart of such powerful nature. It was a clear highlight of our amazing trip over to Ireland and Northern Ireland. History of the bridge:

Originally featuring just a single rope handrail and large gaps between the wooden slats a bridge one form or another has been here for over 350. The bridge was first constructed and used in relative obscurity for the majority of those 350 years by local salmon fishermen taking advantage of this area as a spawning location. Below the rocky island are also a group of large caves where boat builders would work and fishermen shelter from the raging storms. 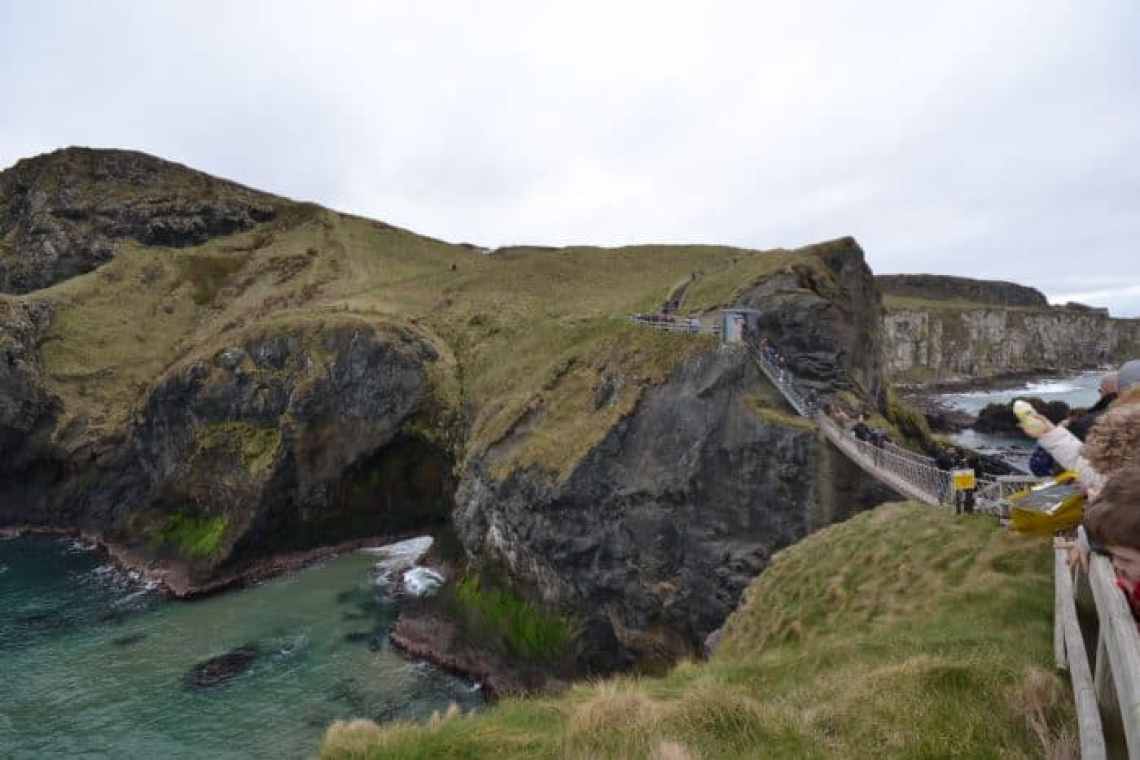 Today however as the Salmon numbers have dwindled the bridge has a new life as an attraction for the thrill seeking tourists! A series of new bridges has been built between 2000 and 2008 improving the safety for the ever increasing numbers of tourists flocking to it’s towering span. The most recent was built in Belfast at a cost of £16,000 and is maintained by the National Trust. 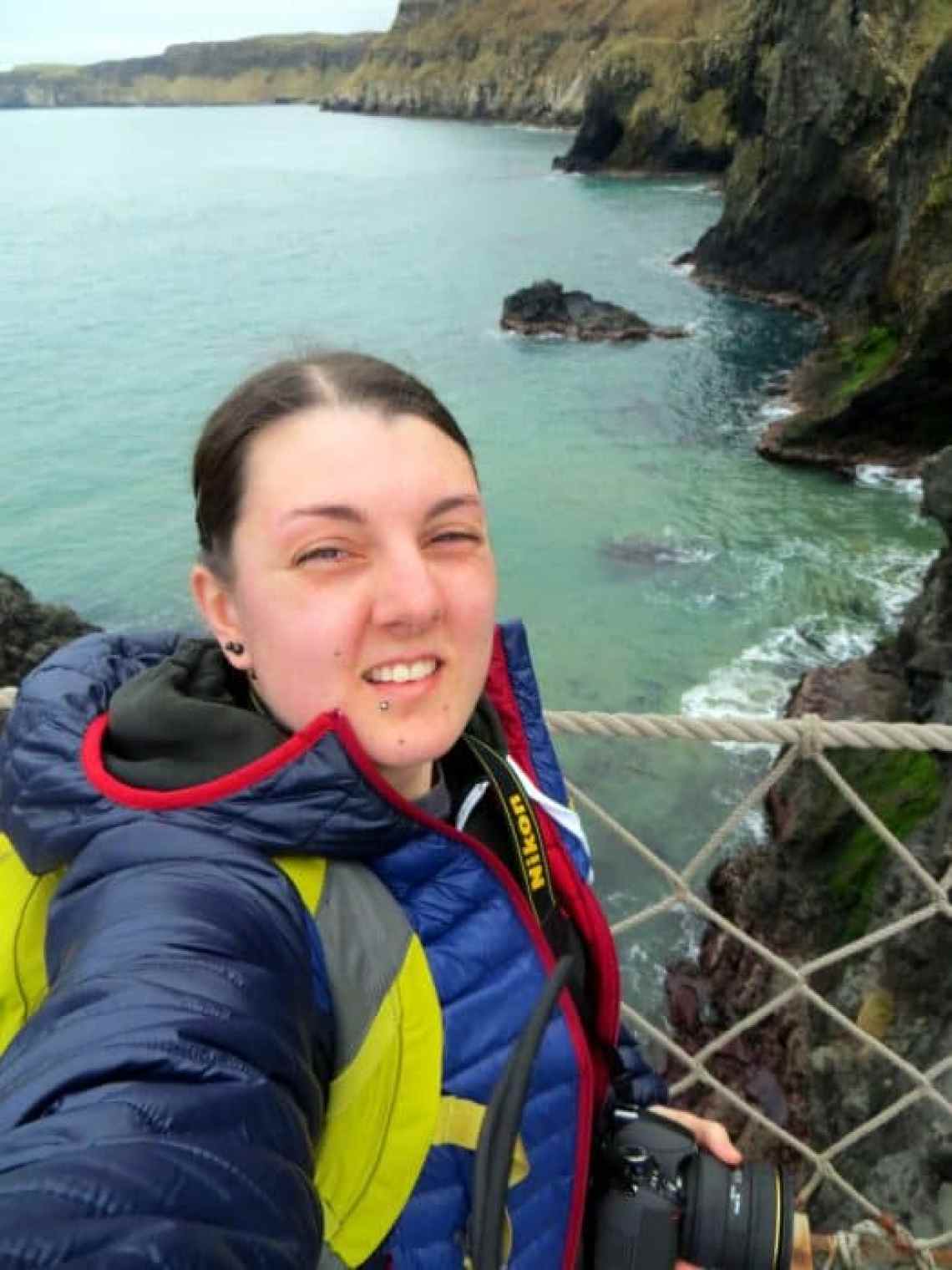 The island of Carrickarede ( Irish: Carraig a’ Ráid, meaning “rock of the casting”) is in fact part of an ancient volcanic plug. It’s rough and exposed edges beaten by the sea for millennia reveal the evidence of the violent eruptions which created much of the characteristic rugged coastline of Antrim including of course the Giant’s Causeway. 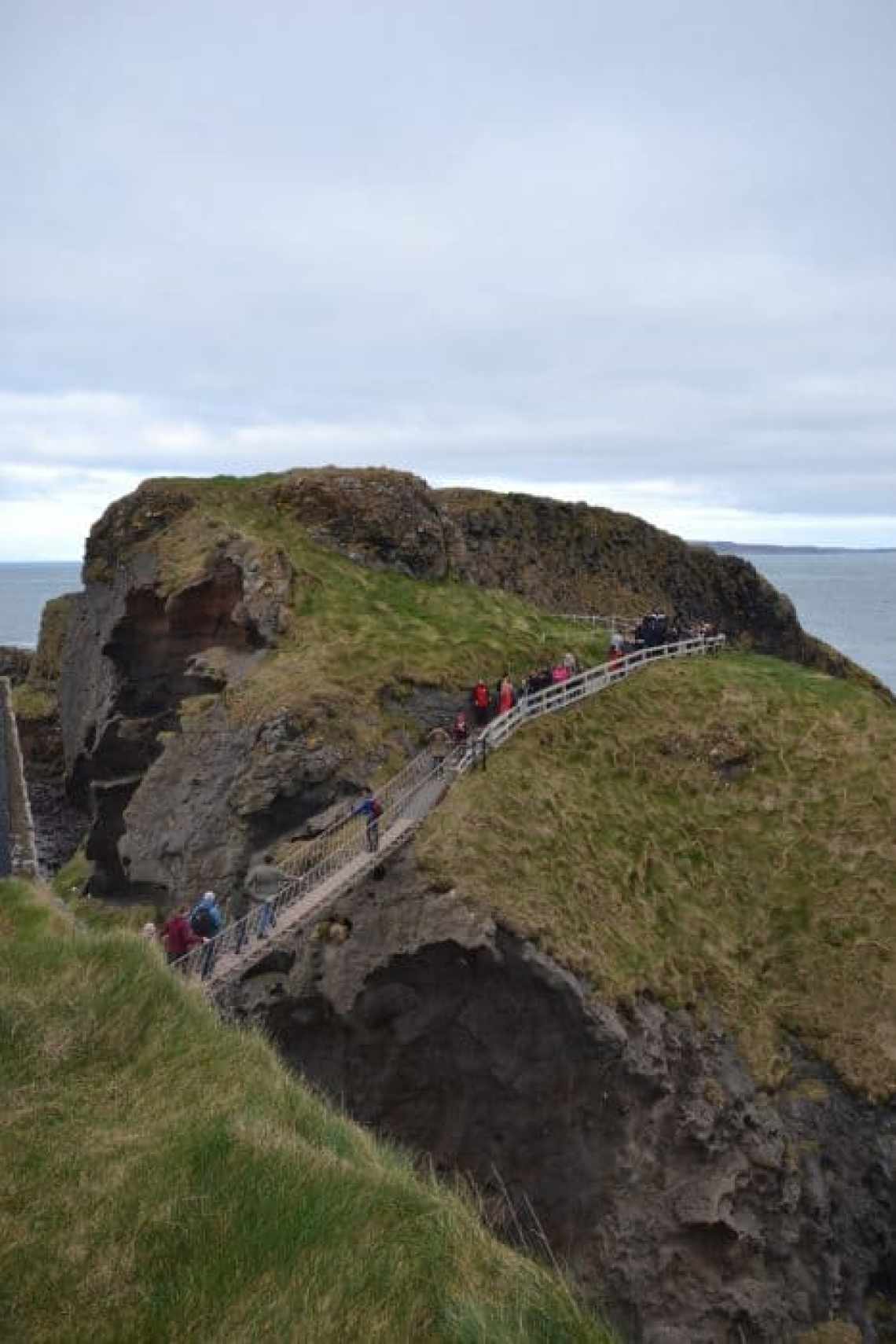 The surrounding basalt and chalk cliffs differ from the tougher volcanic dolerite of the island which has been separated over time by the eroding elements. Firstly as we were on a tour we had to tell the driver in advance if we wanted to do the bridge, of course from us it was a “hell yeah!” Upon arrival the place was already quite full, in summer it can be quite manic apparently and due to limits of people allowed on the bridge and island queues can be seen snaking along the cliff side paths. However we already had our tickets so we at least by passed the initial queue at the front entrance. From the car park to the bridge is a good fifteen minute walk along some gloriously scenic pathways. As you pass over some quite exposed (buy safe) sections of this winding trail the island gradually comes into view. We really could have stopped a hundred times along here to take in the ever changing and dramatic views. Queuing up to cross the bridge was a bit of a hassle to be honest but it did allow us plenty of time to take in the amazing vista. One of the reasons the queues form is because only 8 people at any one time are allowed on the 66ft long bridge and of course then you get people like us who love hanging around 100ft above the ground and holding everyone up!! Or the odd person whose legs turn to jelly and get stuck shaking in the middle! Even for adrenaline junkies, seasoned climbers and adventurers like us we really loved this crossing. The wind hits you as soon as you step off solid ground and the bridge sways from side to side, it’s a pretty exhilarating experience! We thought it might be quite tame compared to many of the things we have done but apart from the lack of danger the thrill is just as exciting! Although we did have to get ushered along after feeling a little too comfortable in the middle! Not only that but once you cross over to the island you are greeted with absolutely amazing views and spectacular scenery, it almost feels unreal. The whole area is unbelievable and is a testament to the sheer power of nature, the flora and fauna of the island are also of particular note with the area being as being of special scientific interest. The bridge is also a great budget experience costing just over £5 to cross the deep chasm from which you can actually see over to Scotland on clear days as well as the nearer Rathlin island. There are in fact no reported accidents of any would be daredevil tourists falling into the swirling green and bright blue sea below although the occasional visitor has had to be rescued off the island via boat! Once you cross over you might just end up stuck! Here’s a GoPro video of the crossing!

Bridge open all year around weather permitting:
Opening times for 2015 are: Services from Belfast or Londonderry to Coleraine. So, would you dare to cross the dramatic Carrick-A-Rede rope bridge?