Well just to let everyone know, this is my first post, since we have begun our long term travels I realised I’ve got to pull my weight a little bit and not just let Nic take all of the burden. We are the Roaming Renegades after all and not renegade! Anyway I thought I’d start with a tour we did of the legendary San Siro stadium. It is the home of both AC Milan and Inter Milan two of Europe’s biggest clubs. We had originally bought tickets for the AC Milan vs Juventus back in January which “should” have been played on the 10th April, which would have tied in nicely with us arriving in Milan the day before, awesome what a cool way to start our travels… NOPE! I just thought I’d check a couple of days before we set off that all the times and dates were still fine and how to get to the stadium, this is when, to my horror that I saw they had moved the game forward a day! 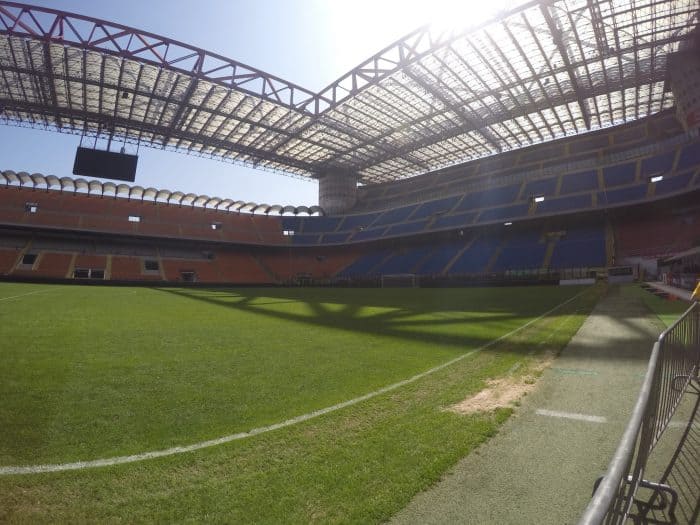 I was absolutely gutted, but there wasn’t much I could do about it at this late stage. We managed to resell the tickets for slightly less than we paid so that took some of the pain away. So after not actually getting to see the game, we opted for a stadium tour, well we had to at least visit this legendary ground whilst we were in Milan.

History of the ground that two huge rivals share

The stadium is actually called Stadio Giuseppe Meazza but it’s most commonly known as the San Siro. Construction of the ground began in 1925, since then it has undergone a number of renovations over years which has seen many different capacities. Today’s capacity is 80,018 which makes it one of Europe’s largest grounds. 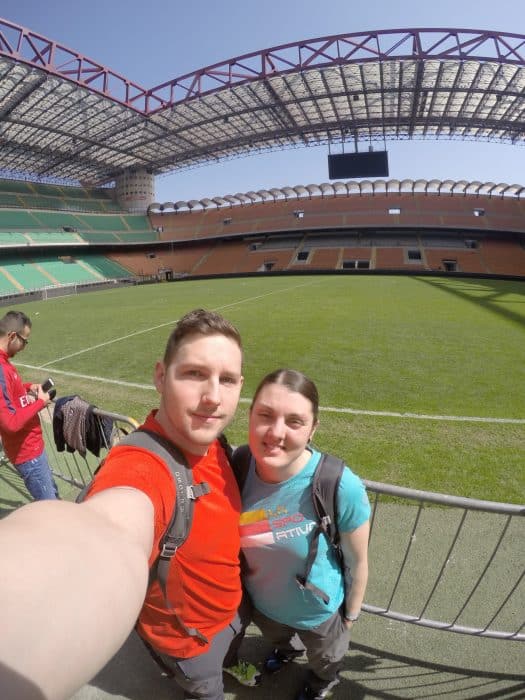 It homes both AC Milan and Inter Milan, one of the fiercest rivalries in football. The ground hasn’t always been shared though, it was the idea of then AC Milan president Piero Pirelli to build a ground in the same district as the horse racing track that he owned, and he wanted it designed without an Olympic track and just purely for football purposes. At this time it was only home to AC Milan, Inter Milan at this point played their home games at Arena Civica. It wasn’t until 1947 that Inter became tenants and have shared the ground ever since. 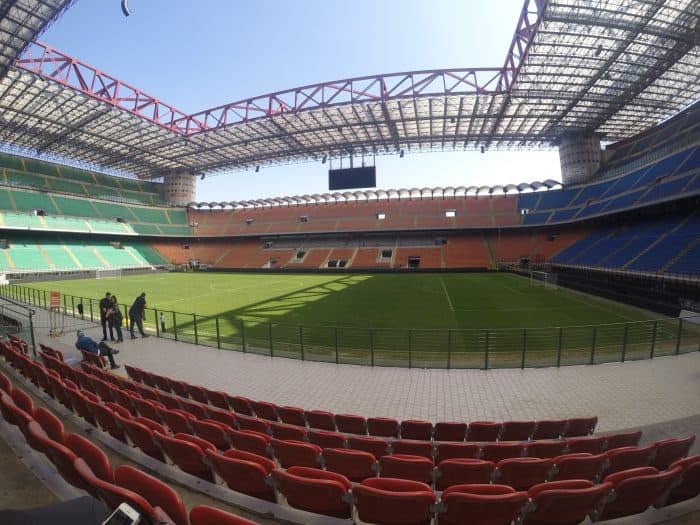 Both clubs have huge history having won most of footballs biggest competitions. Even just over a decade ago (wow where has all that time gone, 10 years ago feels like it should be the mid 90’s not the mid 00’s!) Liverpool (my team) beat AC Milan in the champions league final in 2005 in one of the greatest games ever played, just two years on from that victory became defeat in the final of the same competition against none other than AC Milan again. That’s why this team in particular share some of my fondest memories of football and why it was essential that we visit their ground. 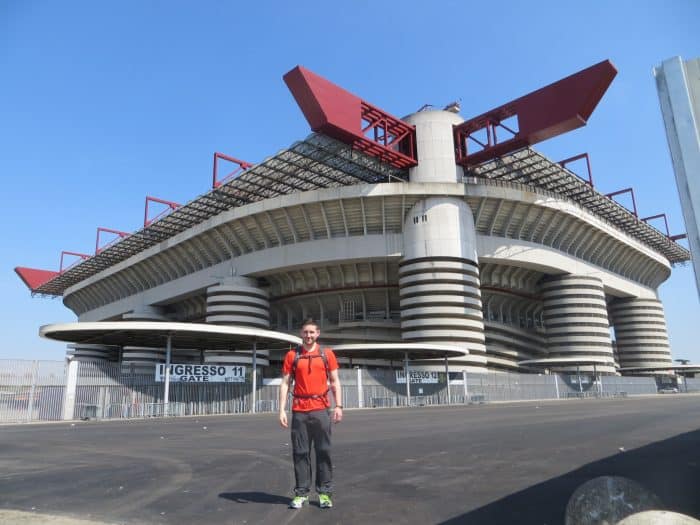 Exploring the grounds of the stadium

Once we purchased our tickets for the tour you can first enter the museum. The museum is split up, with AC Milan on one side and Inter on the other. It was fascinating walking around and seeing all of the different artefacts from each club. 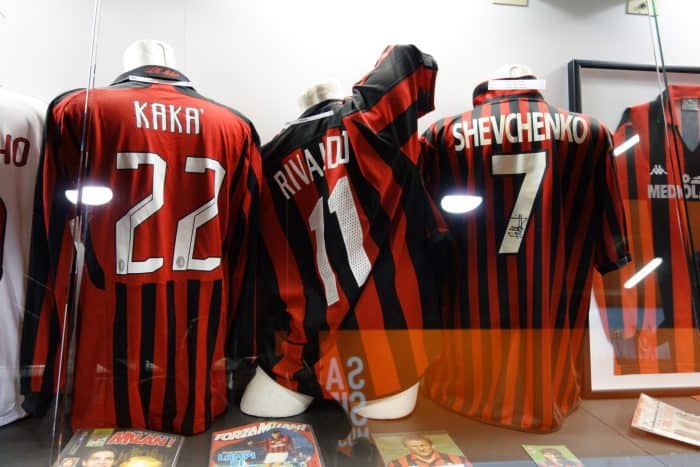 We then asked the lady who worked at the museum where the tour started, she just pointed us around the corner. We walked around to where she pointed expecting there to be a group of other people waiting for the next tour, but instead there wasn’t anybody, we could just freely walk around on our own at our own pace. This was awesome because we don’t usually like having our hand held with a big group of people, but at the same time if there was a tour guide he could have told us more about the history of both clubs and the ground itself. We have been on a few stadium tours in the past and sometimes it’s not fun being rushed through and not having enough time for pictures as everybody in the group all want the same shots. Whereas on this tour, we could take as much time as we wanted and get all the best pictures. 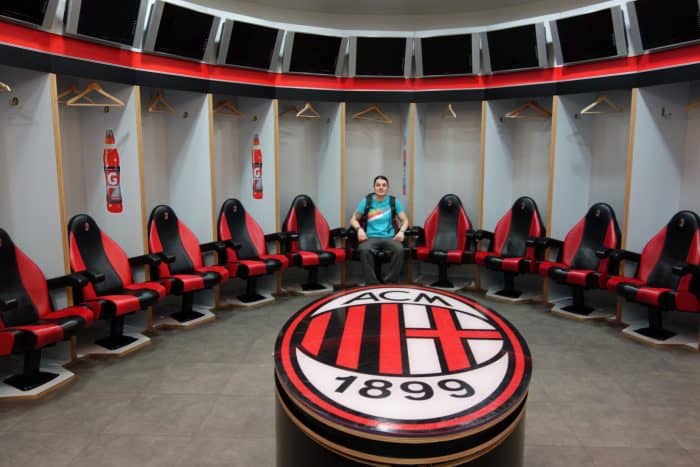 So back to the tour… we first went into the AC Milan dressing room, this was very cool, they had central table with a huge AC badge on it and large comfy leather seats very similar to car seats which came around in a semi-circle. From there we went next door and into Inters dressing room, this was nowhere near as good. There was just a marble type bench all the way around the room, definitely not as comfy as their rivals have it. 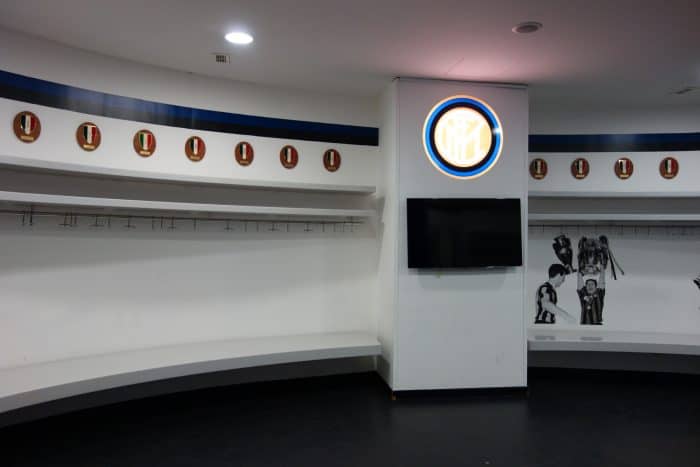 We then made our way down the tunnel where the players would all walk down to the pitch. This tunnel is randomly very long, but once we walked up the steps to pitch side it was then when you realise the sheer size of this ground and how it would be very intimidating for the visiting team yet very inspiring for the home team. 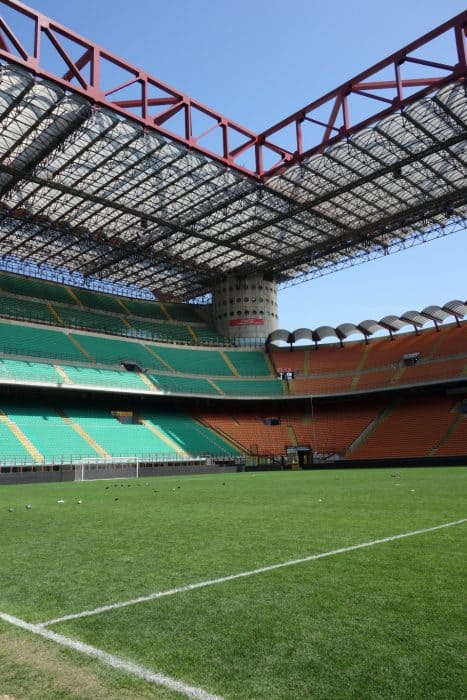 I was just trying to imagine how the atmosphere in the stadium would have been on match day just the day before. We sat in the dugout where we took a handful of great pictures, then we heading up to the main stand where we just sat and chilled out for a while just to take it all in. After sitting in those seats pitch side, we hope this won’t be the last time we visit the San Siro. Although the tour was great, I don’t think it can top the experience of watching one of these legendary teams battle it out on the pitch first hand. 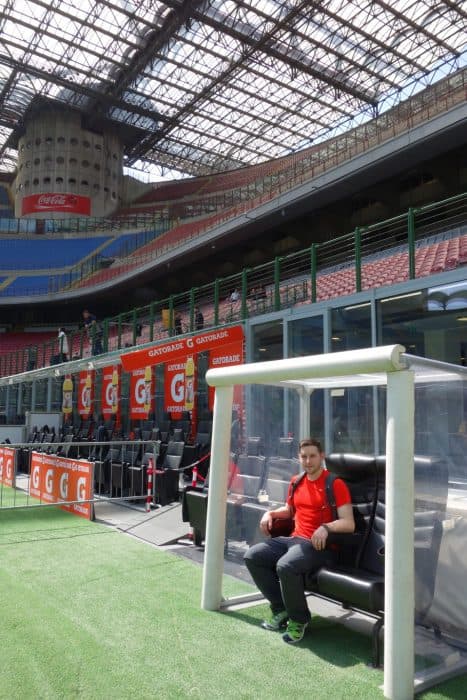 Take the M5 (Purple) line and get of at San Siro Stadium station, exit the station to the left and the stadium is right there. 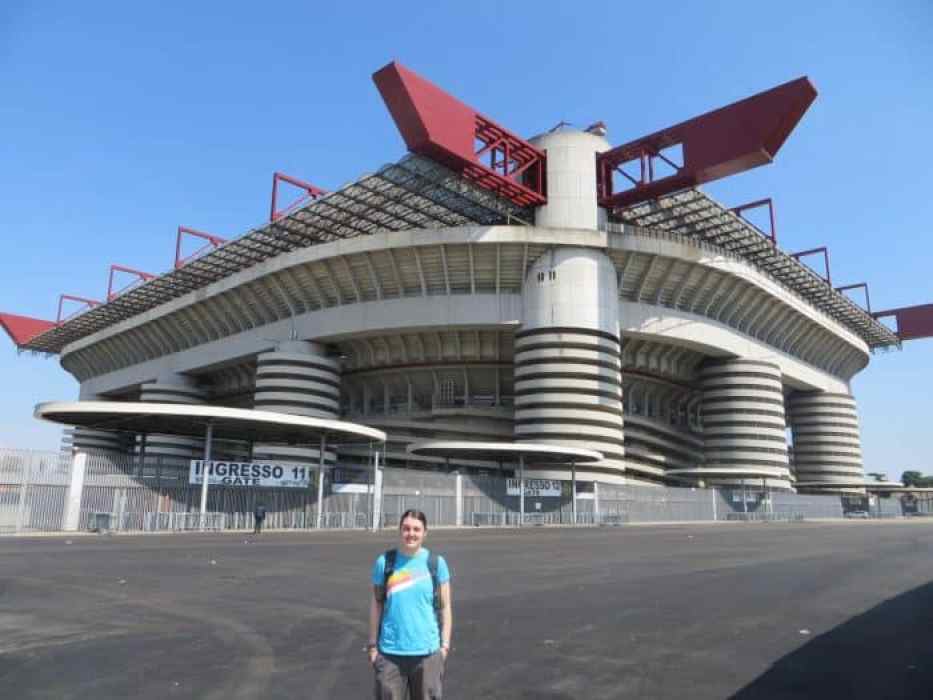 Have you ever visited the San Siro, or any other legendary sports arena?

More from this country

More from our Backpacking trip

As a massive football and fellow Liverpool fan, this is high on my lists of things to see! It looks absolutely incredible and much better than the Mestalla which I recently toured!

Cheers! Yeah it is definitely worth a visit and the history there with 2 teams is pretty impressive. We will be doing more stadium tours in the future as we love seeing behind the scenes!