When we knew we would be going to Bulgaria on our travels through Europe we weren’t really sure what or where we would be heading. Sometimes it is nice to turn up in a country and it be a total surprise. But one thing we did know about was Rila Monastery (and Buzludzha but that’s another story!!), if truth be told we had no idea where it was in the country or how to get there. But things often just fall into place and what resulted was a full day of exploring some of the most stunning and historic areas of this country we fell in love with!

When we arrived in Sofia we began to wonder how to get to this impressive and what appeared to be illusive place. There were buses but all felt a little over priced and restrictive, but we just figured we would have to suck it up if we wanted to experiences such a place. But upon arrival at our second place of accommodation in the city, the amazing Moreto and Cafetto, we were greeted with what they described as a “tour” of the monastery. 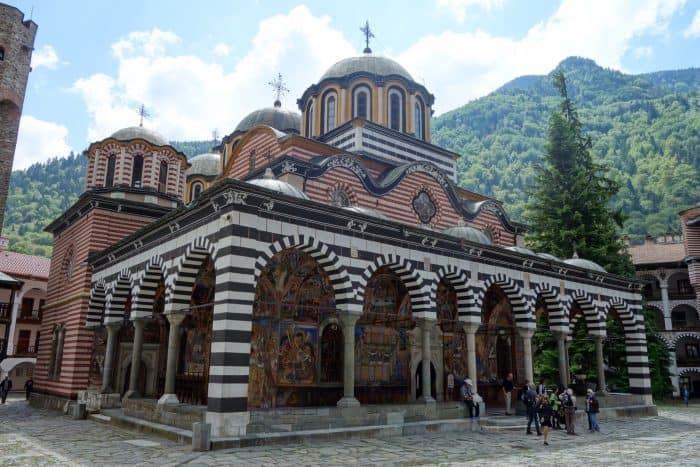 If truth be told this wasn’t a tour and boy are we grateful! We hate tours but you know, we like seeing awesome things, and sometimes you can’t avoid something pre-organised. But where things differed here was that this was a tour in name only, in reality what is was was a group of freinds on a road trip! The time we set off was flexible, we stopped here and there to have a break and take in the view, we added on extra places on the way back spontaneously and did the whole thing in the owner of the hostels car with people who became good friends by the end of the day! 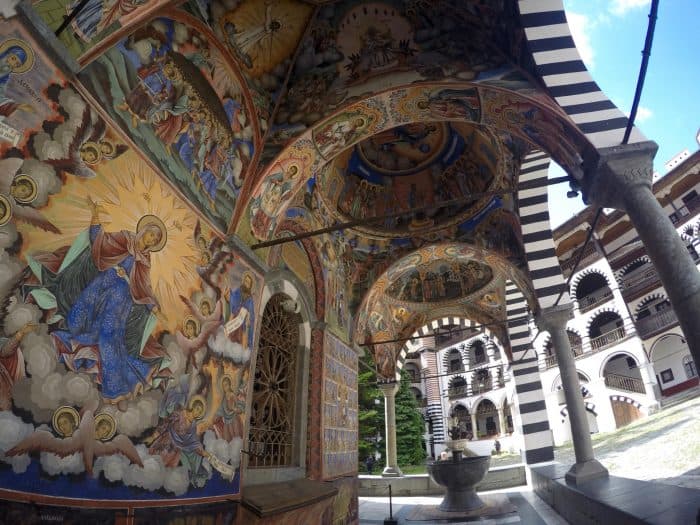 Exploring this historic and beautiful place

In what felt like no time at all we arrived at the UNESCO world heritage site Monastery. Early in the day the crowds that we imagined would swamp this place. Established in 927 by St. Ivan of Rila this iconic and eye catching striped church is set in the stunning Rila mountains at over 1,147 m (3,763 ft) above sea level. To this day the monastery here is not just a magnet for visitors seeking out authentic culture, jaw dropping beauty and stunning surrounding, but it is also still home to 60 monks to this day and is a functioning monastery. 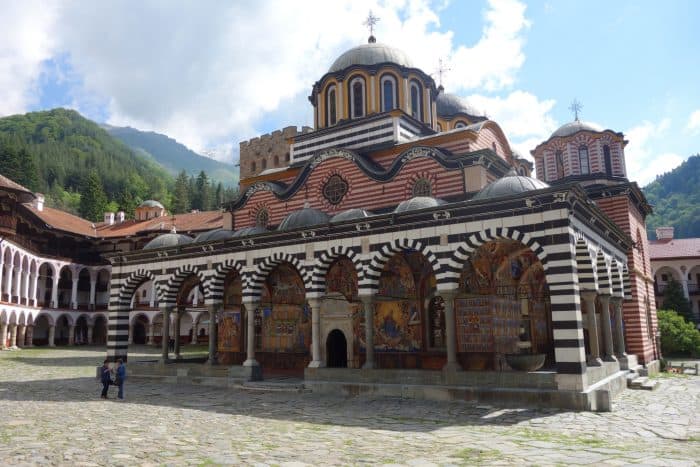 Whilst wandering around the impressive grounds we came across many monks ourselves, it really adds to the authentic and calming atmosphere within these historic walls. From inside the complex you can see the jagged peaks of the Rila mountains peering over the domed roof of the main church of the monastery, the birds sing in the trees and the fresh mountain air blows through here to create a unique site. 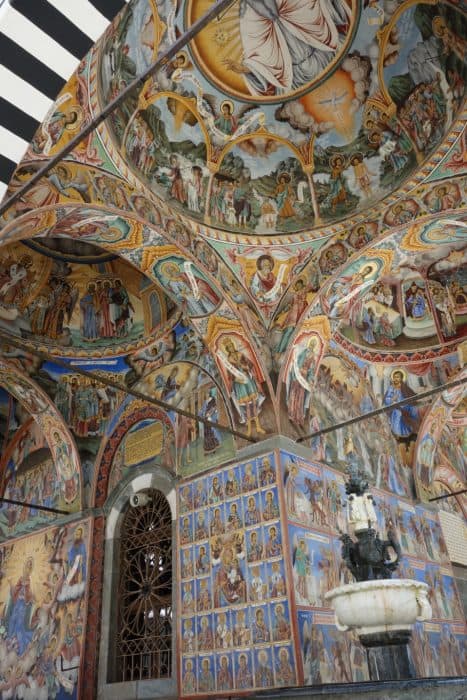 The monastery is one of the most important cultural, historical and architectural monuments in the whole of Bulgaria, even appearing on the 1 Lev banknote. The complex itself is made up of many buildings, churches, towers, a museum, private residential dwellings and of course the main church. 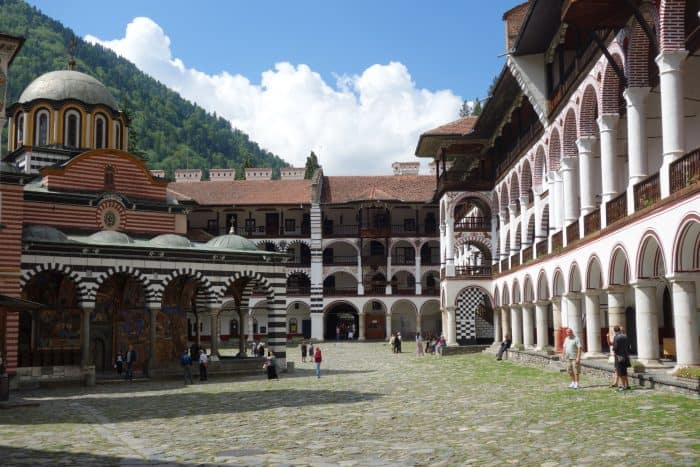 The main church is of course the most well known of the buildings of the Rila Monastery, the iconic striping on the outside makes it one of the most recognisable buildings in the Balkans. But that is just the start of the stunning decoration that adorns this wonderful church. Even the external domes and archways are painted in a level of detail so impeccable it is hard to take in. Impressive frescos in shimmering gold, deep red and bright yellows pop out from every corner. Stories are told of heaven, hell, heroes and demons that capture your imagination in an enthralling and colourful way. 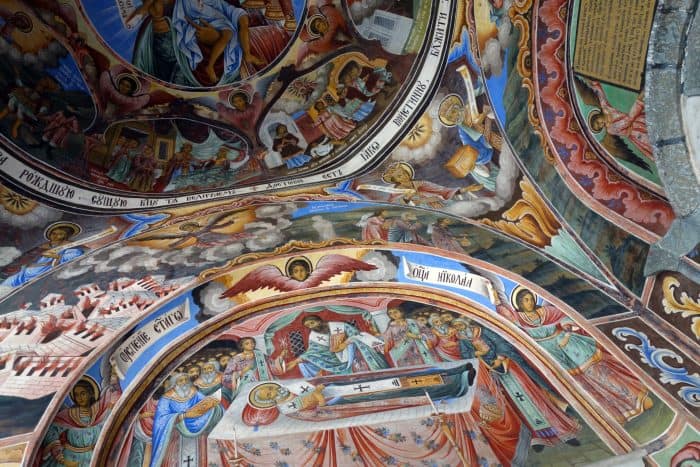 As you step inside the cold and lowly lit church the atmosphere changes, from the bright sunshine and colour of the outside the interior is deadly silent and has a quiet intensity. Monks shuffle around and the devoted faithful kneel before the sheer beauty that befalls them. 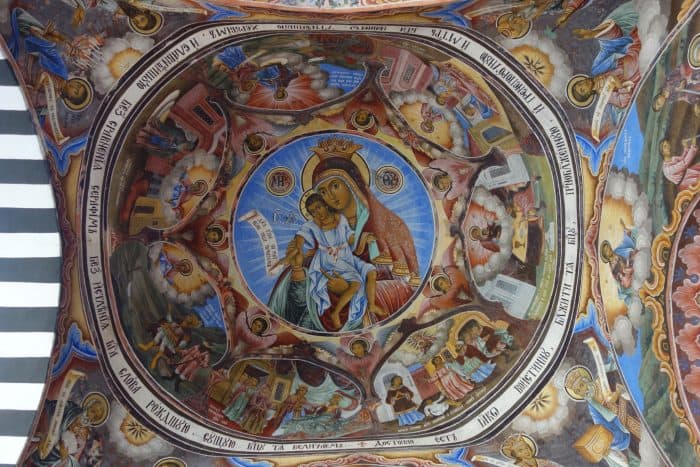 The sweet smell of incense drifts through the air and shards of light pierce the wispy smoke in a rather biblical way. Despite being atheists exploring such a jaw dropping piece of cultural and artistic beauty was quite the spiritual experience. 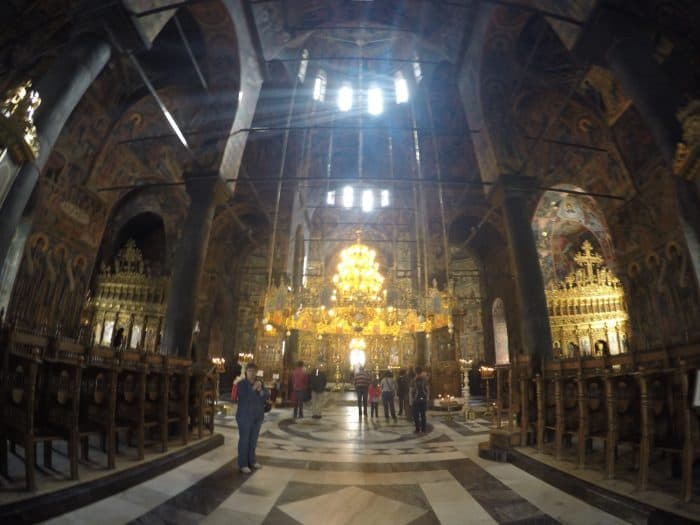 Heading out into the mountains

After exploring the grounds of the monastery itself we decided to head into the forest for more adventure. Firstly we followed the ebbing river along its path towards an abandoned cemetery for monks. Here the tourists of the main monastery grounds disappear and nature has taken hold of this historic place. Graves stand silent and still in this spooky and forgotten corner of the grounds. Branches twist around the centuries old gravestones and every crunching step makes the hair on the back of your neck stand on end! 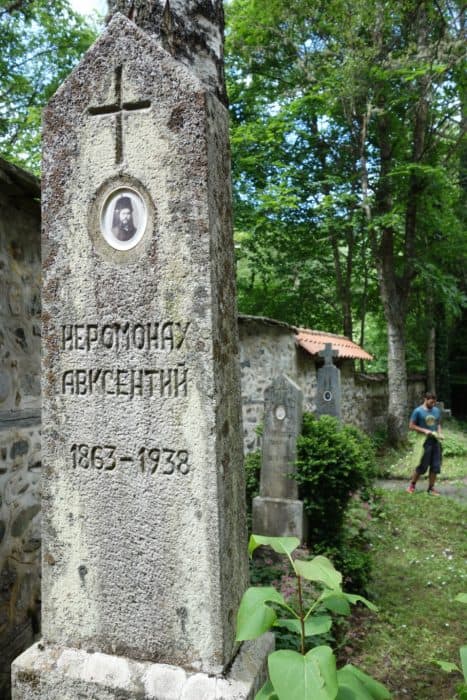 But there was more to explore in the area surrounding the monastery. We took the car a few miles onwards and hiked through the thick forest to an unassuming little church perched on the side of some rocks. Below the surface here stands the Cave of St.Ivan Rilski, the hermit saint who lived here for a time before going on to found the monastery. Here he slept on the bare stone and foraged for food in the woods all whilst performing many alleged miracles. It is said that those who squeeze and climb their way through the damp cave and out into the light above will be forever blessed! 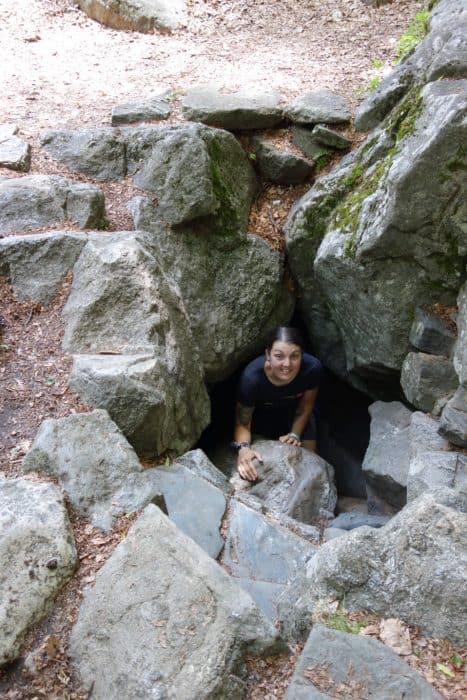 If that wasn’t enough we continued on and through into the mountain pass, from here we were really able to see the sheer natural beauty of this region. 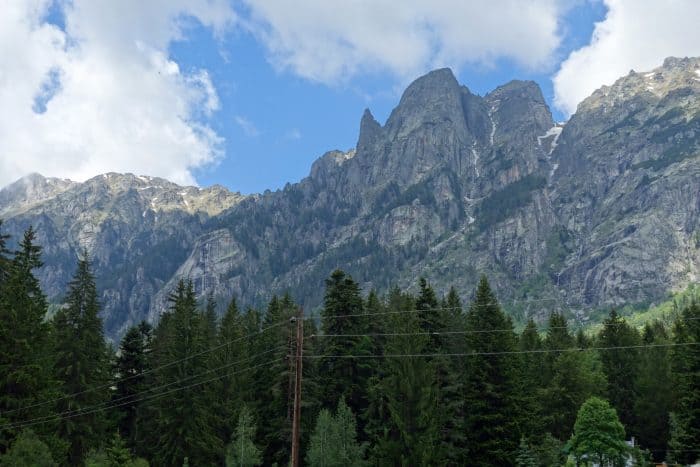 We has no idea of the mountains here in Bulgaria but they really did remind me of the jagged peaks of the Dolomites and yet they seemed so much more accessible and less pretentious. Sitting and relaxing in the shadow of such giants as we unpacked our lunch with the sun shining down was paradise! 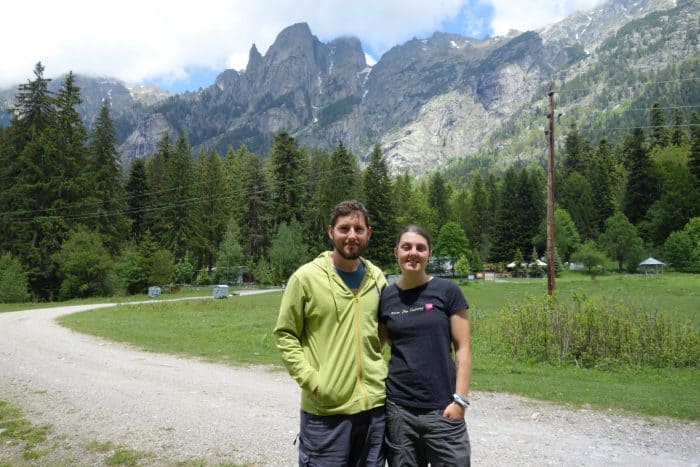 Taking a detour to hike the Stob pyramids

In the car on the way back from what had already been an unforgettable day we spotted a sign in the distance, Stob pyramids. Non of us has ever heard of these but with plenty of light still left in the day we decided to have a closer look. It turns out these natural phenomenons, similar to those we saw in Bolzano, were a half an hour hike away on the side of a mountain! 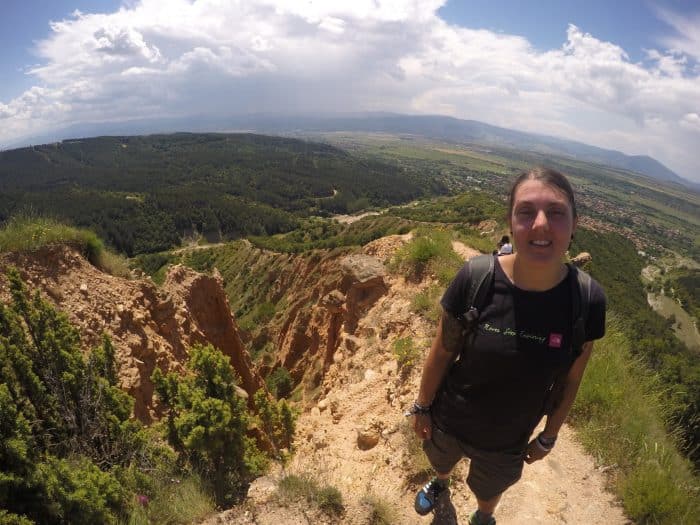 After a long day we plodded on in the dry heat and desert like dry conditions not really sure of what we might find at the end. 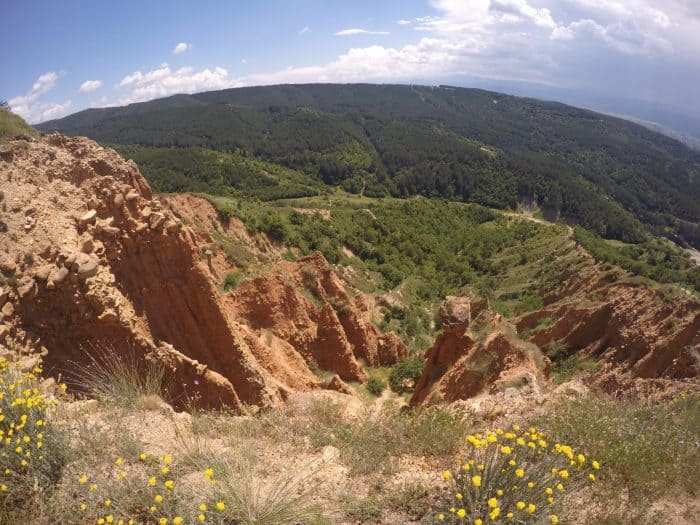 In the foot hills of Bulgaria’s highest mountains we found these tall and strange almost alien like formations. Local legend has it that they are in fact petrified wedding guests, cast in stone because the best man attempted to kiss the beautiful bride! 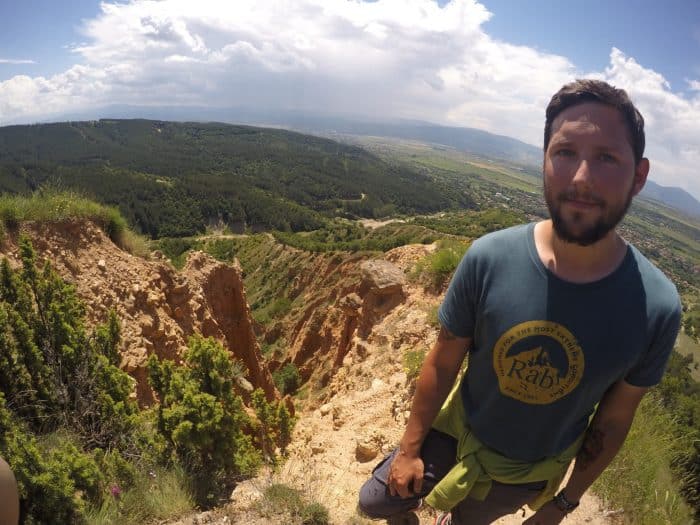 How to get to Rila Monastery from Sofia

There are several buses running from Sofia to Rila Monastery for around 25 Euro each. These leave early in the morning and set off back around 3pm and can be booked online. 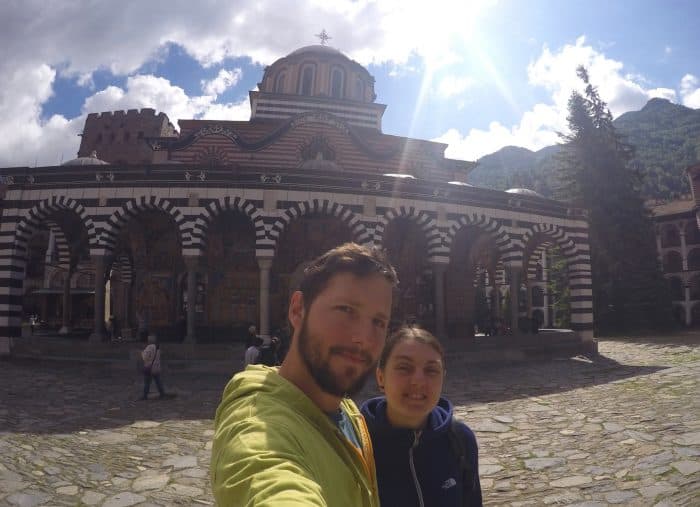 However you can get there on local transport but it is quite a journey. From tram 5 from behind the Court of Justice to Ovcha Kupel bus station. At 1020hrs a bus leaves for Rila village, it arrives at approximately 1215hrs, then catch a minibus from the same bus stop at 1240hrs to Rila Monastery by about 1300hrs. The trip should cost around 10 lev and the ticket from Sofia is valid for the whole journey. For a return trip catch the same mini bus at 1500hrs from the monastery to return to Sofia by 1730hrs. 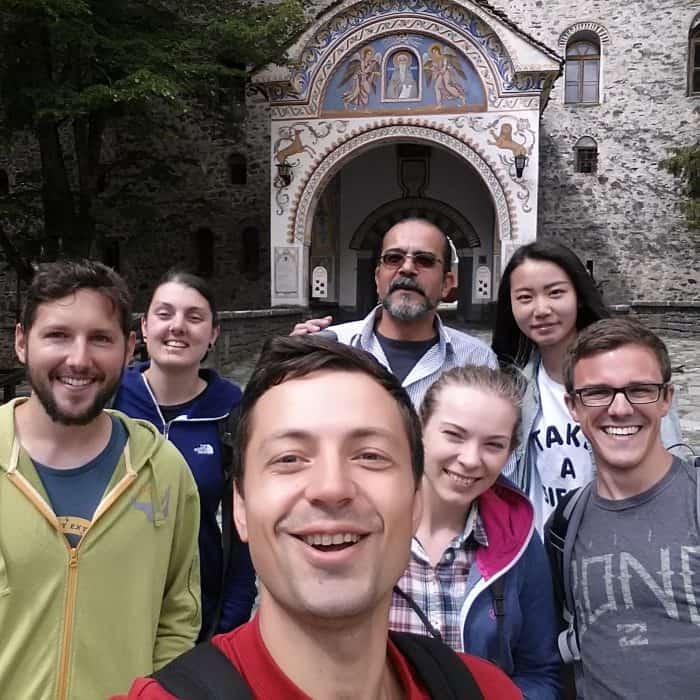 Have you ever visited this iconic Bulgarian monastery in the mountains 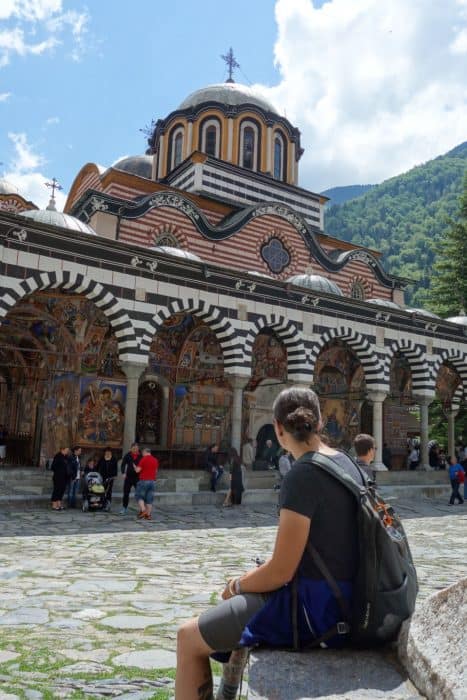 See more from our travels

Everything in this post just looks so amazing. I am really intrigued by the abandoned cemetery for the monks though!

It was one of the most amazing days of our trip for sure, and that cemetery was creepy, in a cool kind of way!!

This monastery is incredible. The architecture, the details and color.. it’s such a masterpiece! Bulgaria seems to surprise me every time. Thank you for sharing!

It is really to beautiful for a photograph to ever show, Bulgaria turned into one of our favourite countries!