During our stay in Ljubljana we couch surfed with a lovely family for three nights, we had done all the usual things to do including visiting the castle, exploring the alternative Metelkova and wandering around the old town plus various others. They told us about a “small hill” called Smarna Gora just outside the city and one of the best day trips from Ljubljana. Their daughter Hannah goes there every Sunday with her friends which we thought was really cool. They also told us if we were to do it then to try a local dish called skruklji in the small restaurant at the top, this is like a large dumpling with various different fillings such as meat or cottage cheese with sauce or bread crumbs on top. All of this definitely sounded like it would be a great day out and Hiking smarna gora felt like a great local thing to do!

Smarna Gora is Slovenian for Mount Saint Mary and sits just north of Ljubljana in the Smarna Gora district and is the highest mountain in the city. It is a very popular hiking destination for local people. The mountain has two peaks which give it the look of camels humps, Smarna Gora which is 669m (2,195 feet) and Grmada 676m (2,218 feet). Hiking smarna gora really is a local rite of passage and one of the best day trips from Ljubljana for sure. 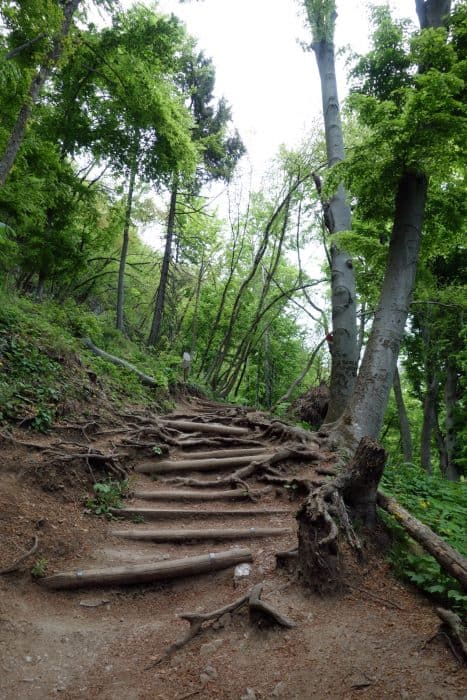 The morning after our chat about various things to do, we decided that hiking Smarna Gora was the best option especially as we love hiking and it looked like it would be a beautiful clear day for it. They told us which bus we needed take to get there and then a few directions from the bus stop to the start of the trail. We got off the bus in the village of Tacen and wondered around the area for a few minutes trying to find where the trail should start. We came across a gravel track which seemed to go in the direction of where the mountain was so we headed up there. 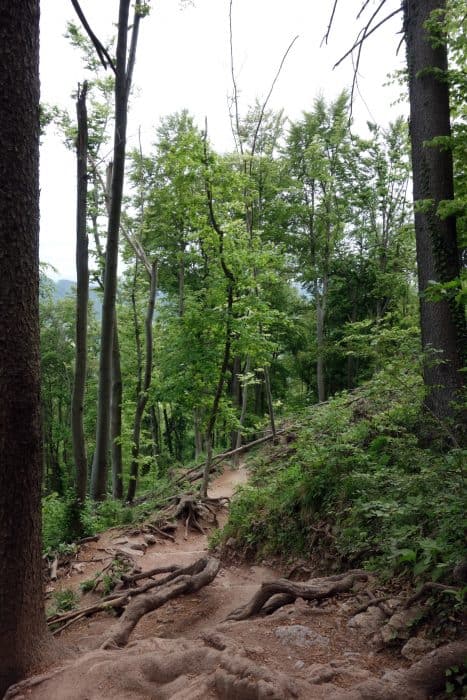 The track took us to the bottom of the mountain but then there was various different paths leading in different directions with no sign posts! Our hosts told us it was very easy to navigate yourself to the top by following the small red and white painted circles on the trees. We stood at this crossroad of paths looking for these small circles but couldn’t see a single one, we knew we had gone wrong from the start and must have took the wrong path straight away! Oops. By that time though we had walked too far to then turn back around and start again, so we just chose a path at random and hoped for the best. We knew that if we just walked up hill then eventually we must reach the top. 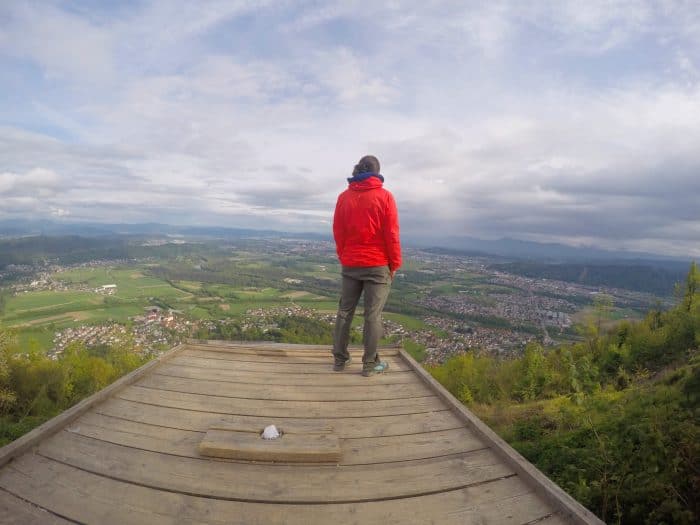 After around 20 mins of walking up many different paths which lead to dead ends turning back finding other paths which again lead to dead ends we were thinking we should just off piste it and head steeply through the over grown forest, but then we came across a couple of local hikers, great that was lucky, we can just follow these as they seem to know exactly where they were going. So we kept a few feet behind them and followed them slowly up a few paths. They then turned around and told us it was a dead end! We still had hope that they knew the way so we still followed them, again the women in front turned around, another dead end!

Wow we’re all lost, great! Hiking smarna gora turned out not to be as simple as we expected! We got talking to one of the women who told us that her son and his girlfriend knew the way but they had walked off ages ago and left her behind because they were much fitter than she was and couldn’t be bothered waiting! We walked with her and chatted for a while, found out she had just come back from Liverpool after doing a stadium tour which was random but really cool. After another 15-20 minutes of walking and getting lost we made the decision to go off piste and scramble through the thick over growth, it was full of spiders which we was definitely not keen on! (later that night we also found out it was full of ticks as well, as Nic had one burrowing into her stomach that we had to pick off, we felt mean as it was only trying to be friends!) 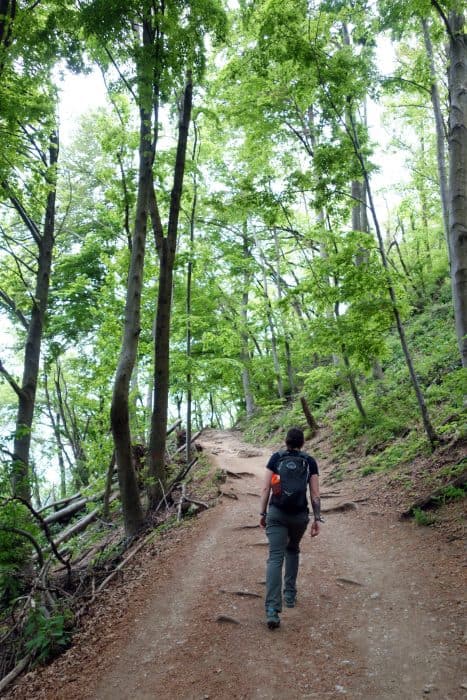 Looking up we saw some other hikers probably about 150m above us walking along what looked like an actual path, so quickly we fought our up and onto the path, phew! We saw one those small red and white circles which had eluded us the whole time, we took a few minutes to rest and headed to the summit following the circles. It wasn’t so far from there and was a nice stroll through the woods. 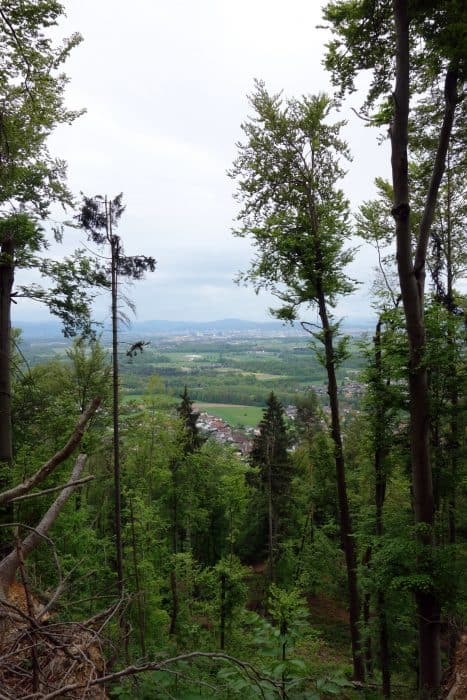 After Hiking smarna gora and reaching the top we went to some of the viewing platforms and took in the awesome scenery, we couldn’t have got a better day for it. We took loads of pictures before going to the restaurant and trying struklji, we asked for the one with cottage cheese filling and just shared one as our hosts told us that you get a big portion for the price, and you certainly do, it’s definitely enough for two people and also very tasty! Making it one of the most local day trips from Ljubljana you can take! 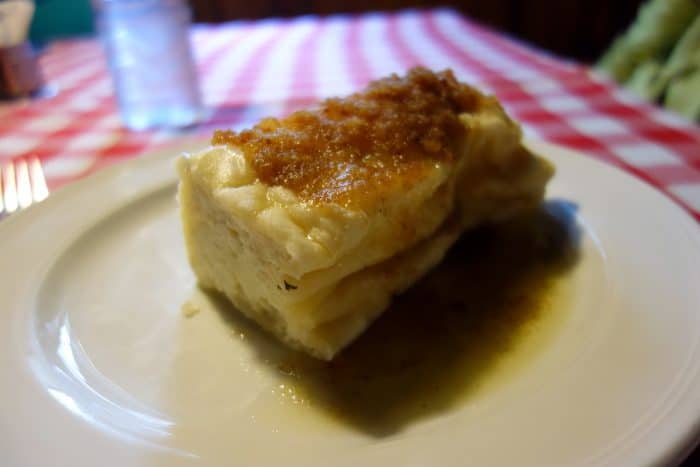 After the struklji we went back out to take more pics from the paragliding platform that we saw when we got to the top. It is such a cool platform to stand on and get great pictures of all the city behind you. You would have to be really crazy to run off that though if you were paragliding as the platform is so short! We’ve done paragliding before but I doubt I would be keen to run off the edge of that! 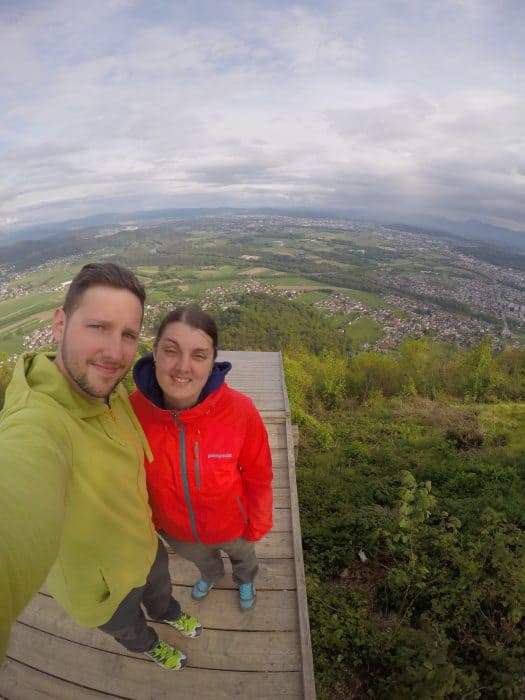 Later that night when we arrived back at the house, a lot later than expected, it was quite awkward as they were already sat down eating dinner with previous couch surfers who came to visit them for a couple of days. We explained to them that we somehow managed to get lost on the way up which was the reason we were so late, they all found it very funny though and didn’t seem bothered that we showed up late!

We would highly recommend this if you have a few days in Ljubljana but also recommend finding the correct trail before you start! 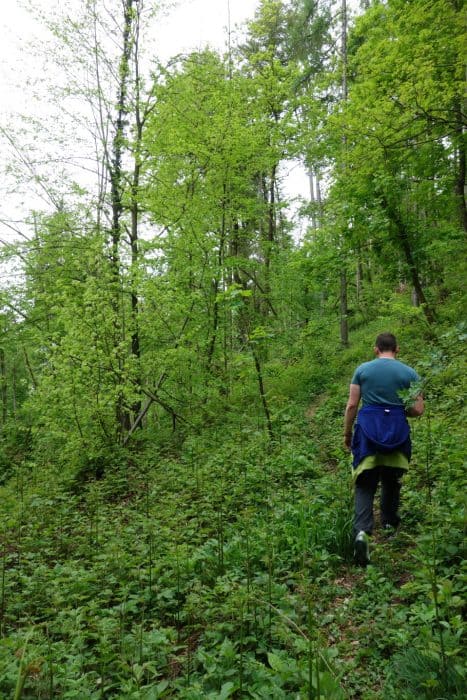 Hiking Smarna Gora: How to get there from Ljubljana Slovenia

We took the number 8 bus to Gameljne which takes around 20 minutes from the city centre. Before taking a bus you must buy a card which is 2 euro and pre load it with as many rides as you need. Each journey costs 1.20 euro and lasts for 90 minutes. Hiking Smarna Gora is as easy as that and one of the quickest day trips from Ljubljana.

Have you ever taken this Ljubljana hike?

Looks like you are making the most of Slovenia. One of my fave countries in Europe I have to say. Directions – who needs them? Maybe they are useful sometimes. The ticks would have freaked me out. Glad you got out safely and had a great experience.

Ha ha, yes we loved it! Who needs maps, keep heading up and you will get to the top! Yeah, not something I want to repeat but hey, its a life experience!

sounds awesome – I was in Ljubljana a few years ago but had no idea that this hike existed! The views from the top look amazing!

It is quite a local thing to do, we would never have known if our hosts didn’t tell us! Something for your return visit maybe!