The legendary Duomo of Milan is the hub of this huge city, built over 600 years it has seen many sides to this bustling city and today draws huge crowds from all corners of the globe. The largest cathedral in Italy is quite a sight, its impossible details and spiky pinnacles draw you in as soon as you set eyes upon it. We headed up the narrow and winding staircases to walk along the roof tiles!

The Milan Duomo was in fact only “completed” in 1965…looking at the impressive building, it almost seems unbelievable that it could be so new! Well, here’s the thing, building started way back in 1386 and took well over 600 years to complete! Even now work is still being carried out to finish off some sculptures and tidy up the crumbling 6 centuries old sections. Forget the cranes of the Sagrada Família that have stood for a mere 130 years! This gigantic cathedral took generation after generation to be finally built! 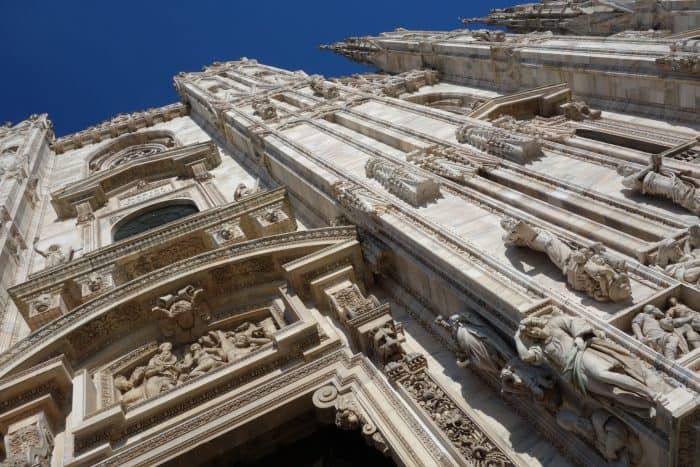 The streets of Milan radiate around the cathedral, but as old as it is the city itself is even older. This indicates that this site has been a place of high significance since the foundation of the roman settlement of “Mediolanum”.

The cathedral itself was commissioned by the Bishop Antonio Da Saluzzo in 1385 and this was backed by the first duke of Milan with a vision to create the worlds largest church. Gian Galeazzo even gave access to his own marble quarries and granted tax exemptions for those involved in the project. It took until 1418 to even be consecrated…and at that point construction of the nave has only just begum! 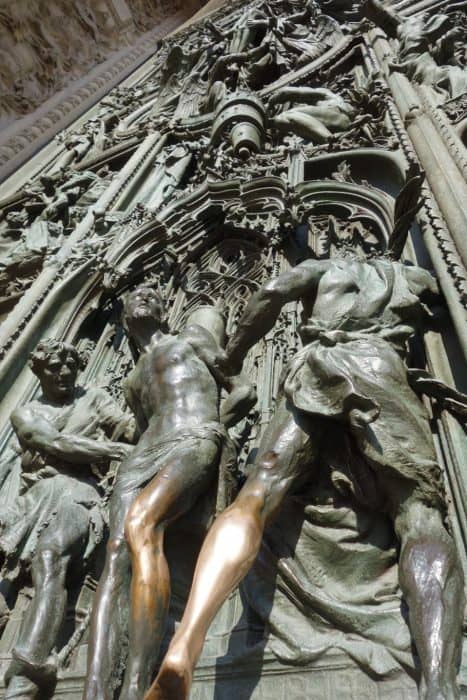 Over the years, a great number of master builders and architects were involved and given the length of the project it became a flamboyant mixture of styles and influences! Despite that and the even complex and spectacular design the end result works amazingly! There even had to be a canal system especially built just to ship the pink hue’d marble up from Lake Maggiore, the evidence of this can be seen along the “navigli.” 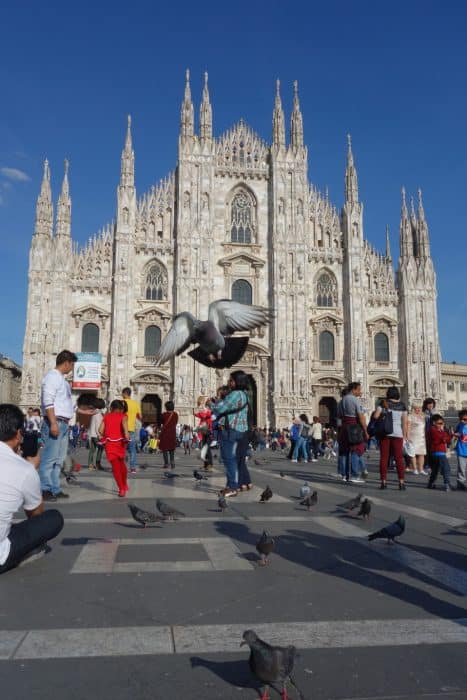 It might not be the biggest in the world, but it is the fifth largest and out of that list it is the oldest! However a list that it does top is that of having the most amount of statues, 3400, on one building. Walking amongst this forest of spires and sculptures really is like stepping into another world. 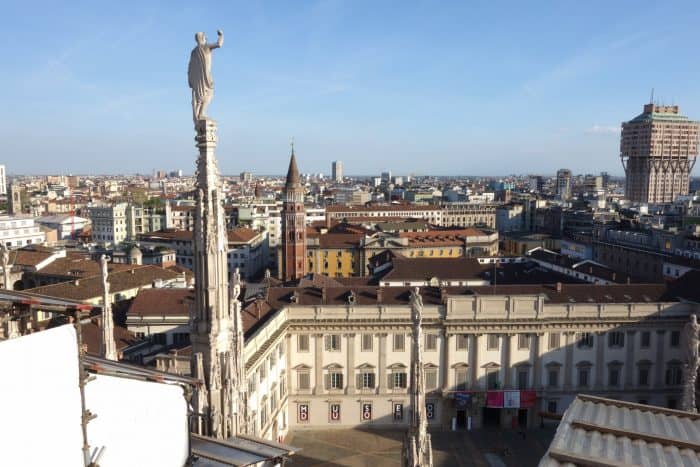 As soon as I knew our new route would be taking us to Milan then visiting the Duomo became something that was top of the list. I have to admit that other than this and the San Siro I had little knowledge of this city as it wasn’t somewhere that was otherwise on my radar. So heading to this magnificent building seemed like a great way to start our visit and get to grips with the geography of this new city. 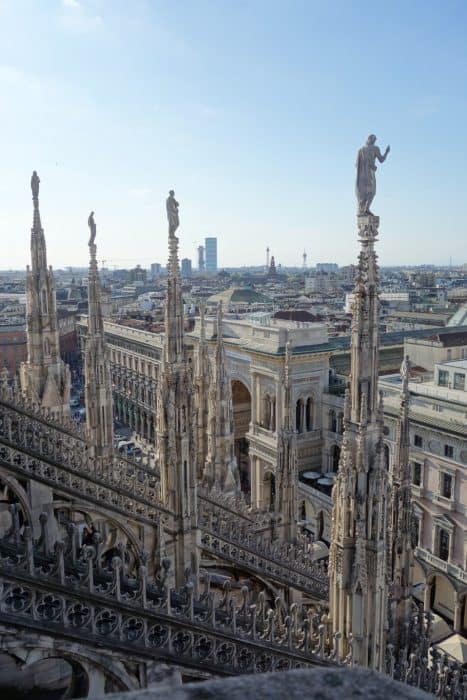 Milan, it turns out, is absolutely huge and this gigantic duomo allows views for miles across all its sprawling majesty. We chose the cheaper option of ascending the rooftop via the steps, like many churches the claustrophobic and humid staircase wound tightly up what seemed like an endless amount of steps. 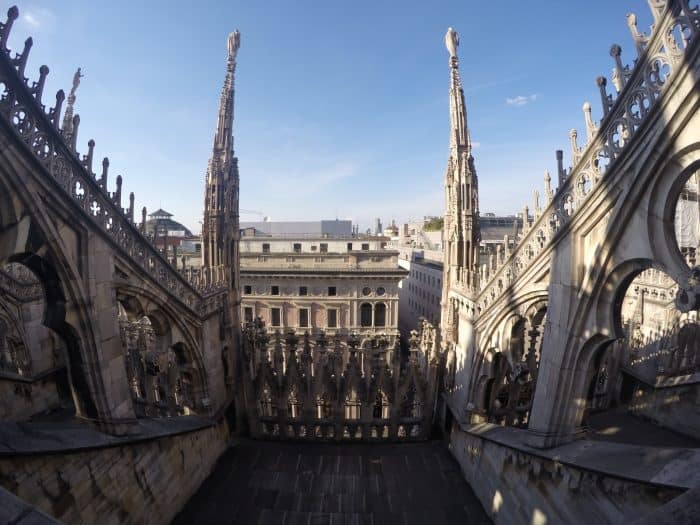 On to the first platform and already we are at a dizzying height, but unlike many other church tops we have visited this isn’t a tight and tiny viewing platform, but the actual roof. Up here you can skip between the marble roof tiles and walk along the carved guttering. Ducking down below archways and standing face to face with intricate statues and the puzzlingly detailed spires. 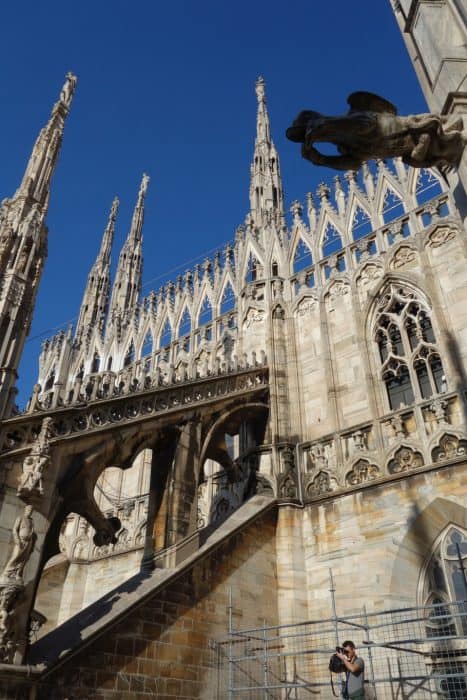 Not yet over there are more steps to come, this time teetering on the edge of the main façade, the shadows of the hundreds of spectators below cast a long but ant like shadow in the evening sun. Up here is bustling with people taking in the view, eating picnics and even sunbathing. It is quite a surreal atmosphere up here on the roof of this magnificent cathedral! 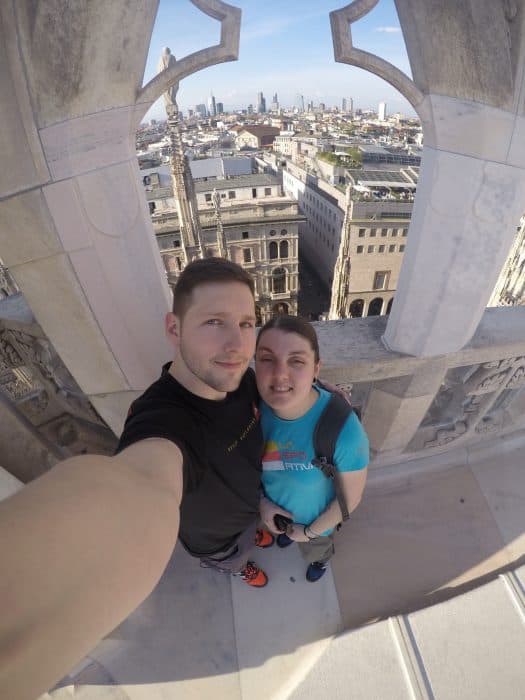 It’s quite a strange place to be, on the one hand it feels like it has been designed for this very purpose. To not only be an important centre of worship for the heart of this religious city in a passionately catholic country. But also to be a place to take in the wonder of what is around us, to see up close the artistry of this creation and to connect more closely to its very being. 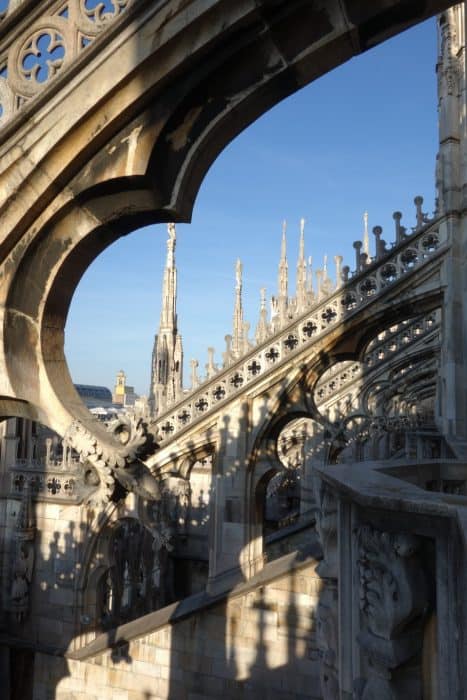 And yet at the same time it still feels like we are all running around on the tiles of this sacred church! As though someone has left the door unlocked and we all just snuck up here onto the roof for a view few get to see!

I have to say, we could have spent hours up here. On a hot and sunny day there is nowhere better to take your time and enjoy the spectacular view and surroundings both near and far! 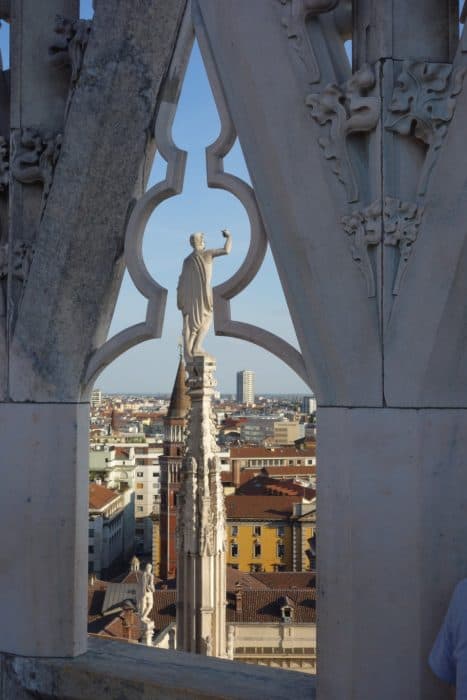 To head up to the roof you have two options!

To buy tickets you first must queue up around the side of the building and purchase them at the booths, there can be quite a queue so pick your time wisely. We arrived at around 5.30pm on a Sunday and it took around 10 mins.

Then you must walk to the other side of the church for the queue to the stairs, here you will be searched also and the queue can again get quite long! 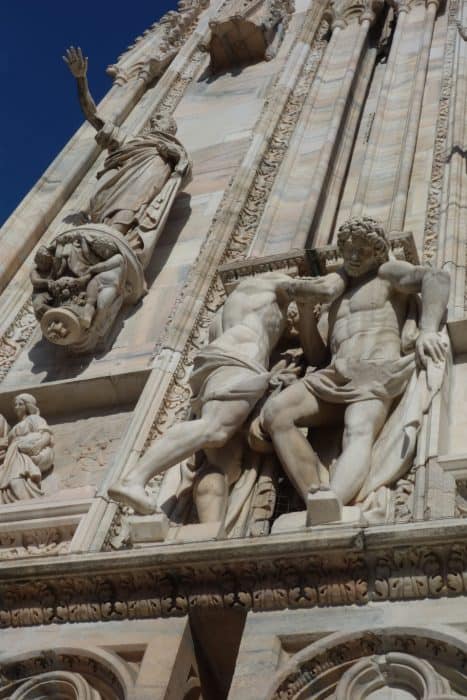 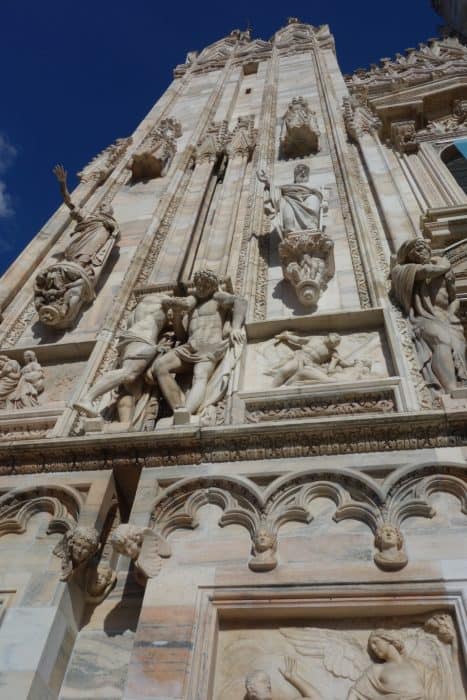 Have you ever visited the Duomo… or any other amazing cathedral you loved?

Check out these from Eastern Europe that were unforgettable!

Churches of Eastern Europe: Photo essay of these stunningly detailed places of worship

More from our adventures on our RTW trip:

Wow, 600 years! It’s spectacular, though. Really need to get to Italy sometime. I love visiting cathedrals wherever I visit.

Ha ha, yes, they sure took their time over it! So much to see in Italy we really loved it!

Yeah, you can see why it would take so long!

It’s a great way to get your city bearings isn’t it, climbing the cathedral. And being the 5th largest you just have to do it! We did the one in Strasbourg last year and like you loved being so close to the statues that just look like dots from below. Such a cool thing to do!

Yeah, even if the building isn’t as stunning as this it is still great to head up the tallest thing and see the city as a whole…but on something like this it is even more epic!

This looks amazing! I’ve been to Italy before but never to Milan. I hope to make it back to Italy soon to check this out!

Thanks, it is a stunning sight indeed and Milan is well worth a visit when you are in Italy.

Yeah it is wonderful feature in a great city!

What an amazing church! I love all those huge gothic cathedrals in Europe. 🙂 My favorites are in the UK and Germany.

It really is stunning in person, yeah love this style alongside the onion dome ones in Eastern Europe! We do have some great ones back home!