After you have toured the temples of the royal city of Luang Prabang then the next must see spot is just a few km from the town. Heading up to the stunning milky turquoise waters of Kuang Si Waterfall we decided to do it a little different and instead rode a bike up the mountainous roads and continued on foot afterwards along jungle lined tracks before finishing in a tiny tribal village making the most of this stunning region of Laos.

With a tiring ride ahead of us we woke up early and met our guide for the day. He took us around the morning markets to get some well needed supplies such as fresh jackfruit, sweet rice balls and some snacks for later on. 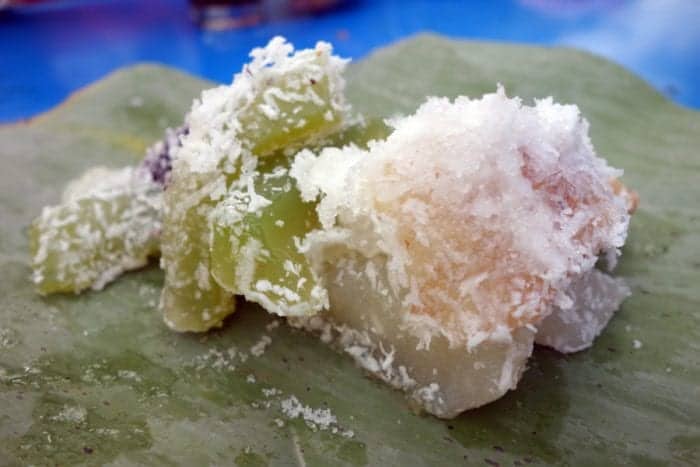 Before we headed to the old docks along the Mekong for some traditional Laotian coffee and snacks for an energy boost before the steep ride! Watching the town come to life around us was beautiful and the coffee was well needed after the early wake up call! The ride to Kuang Si Waterfall would be around 30km on some steep terrain, so preparation was needed! 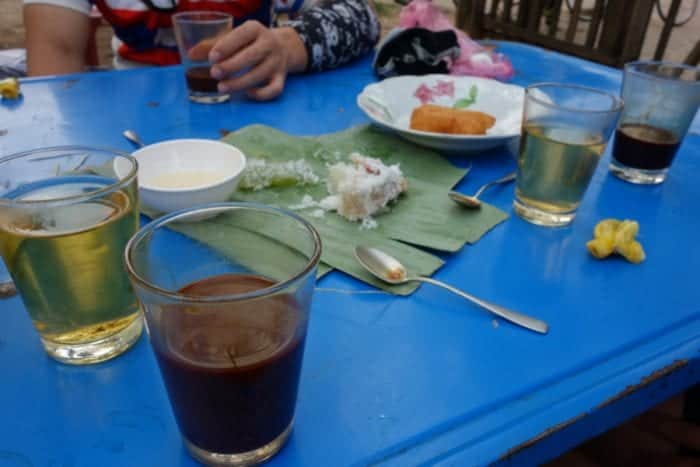 Book your transport across Laos and Asia here: 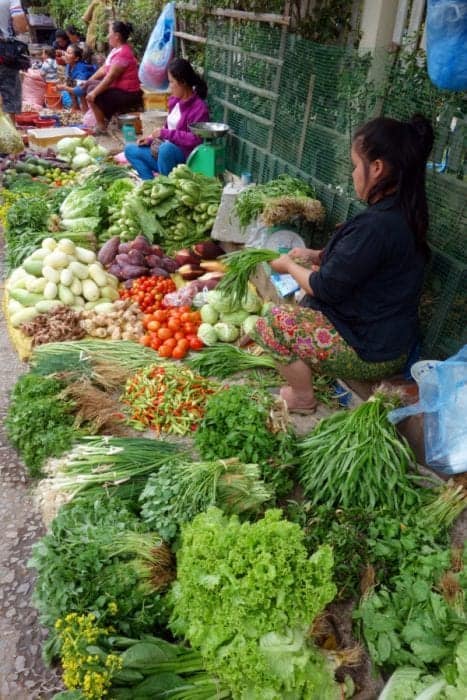 Taking the long and steep road up to the Kuang Si Waterfall  over some steep terrain!

The road up to the waterfalls is around 30km long, through steep sections of riding and winding roads that pass temples, villages and great viewpoint. Taking the more challenging route up was an exhausting choice given the beating sun, but also one which was the most rewarding. 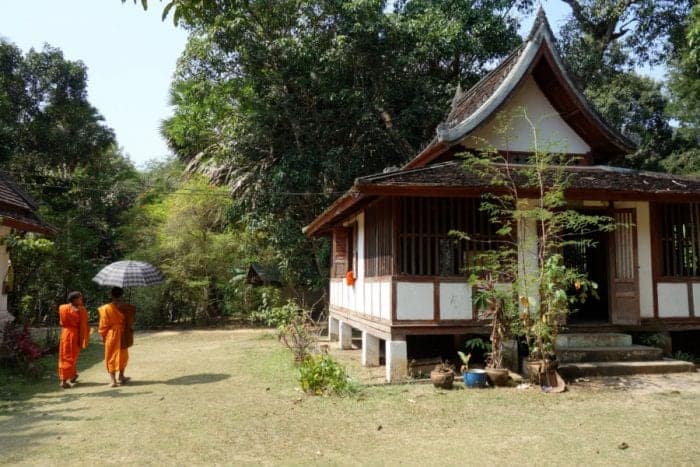 Pausing for a breather in a small village as others sped passed was a much more peaceful way to take in the surroundings as well as interacting with some freindly locals who offered us water and snacks! Kuang Si Waterfall was now well and truly in our sights, just another 4km away… however it was all up hill! 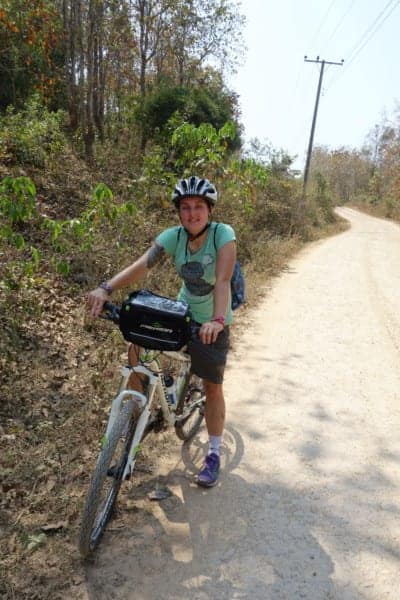 Exploring the stunning Kuang Si Waterfall and cooling off in the pools!

Reaching the Kuang Si Waterfall after a couple of punishing hours on the bikes was such a relief, almost overcome by the heat all we wanted to do was to jump straight into the beautiful waters! Although, upon arriving at the falls we were immediately struck by the beauty of the place, the serene setting in which the turquoise waters formed natural pools and falls, it was an enchanting sight to say the least. 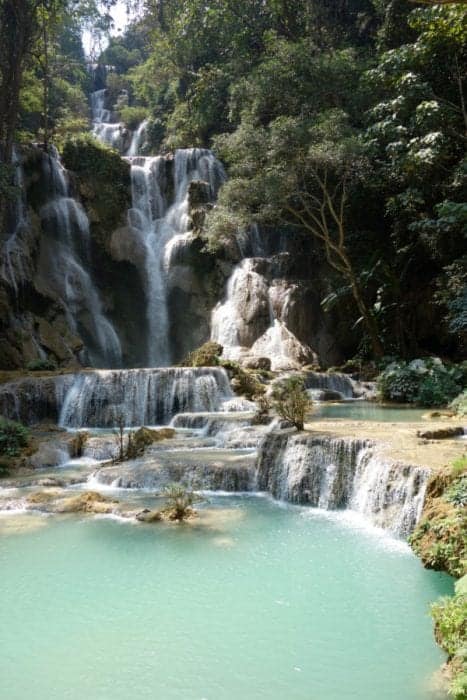 At this point we had almost forgotten just how hot and sweaty we had become after the cooler air and shade from the cover of the Kuang Si Waterfall. The azure multi tiered wonder making the effort more than worth it! Cascading platforms surrounded by lush green jungles made way for the spectacular 50m main waterfall that stood powerfully carved into the stunning landscape creating a breathtakingly tropical scene. 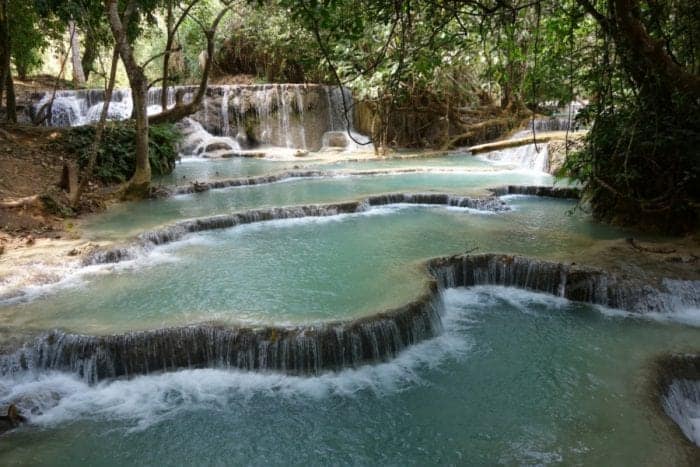 Ok, once we were done gawking at this most beautiful sight we finally decided to take a cooling dip, and that it was. The shade provided by the trees to the water as it makes its way down from the higher peaks above protects it from the suns rays. The water here couldn’t be any more refreshing offered a great contrast to the heat we had endured on the way up. Living in the water are several “doctor fish” who enjoy nothing more than nibbling on your dead skin… make sure to keep moving if you want to avoid being eaten! Personally I find the sensation a bit freaky! 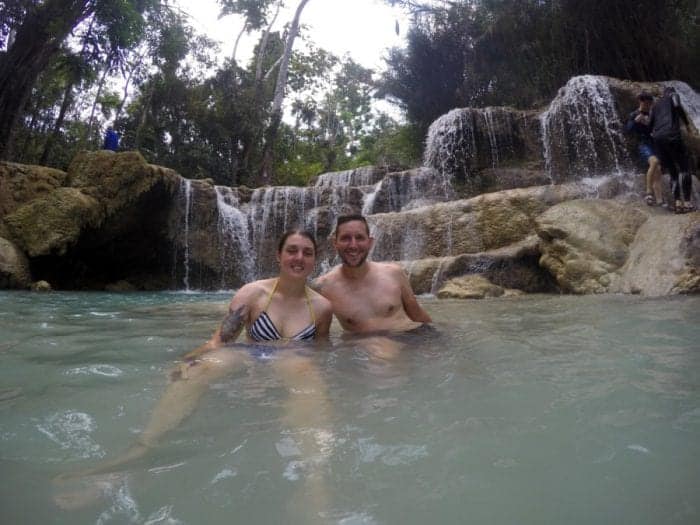 Heading on up for a long hike through the jungle

Most people when they visit the falls stick to the bottom where the main pools occur, a few brave the steep and slippy track up to the top to discover the “hidden swimming pools” that flow down over the impressive 50m drop below. 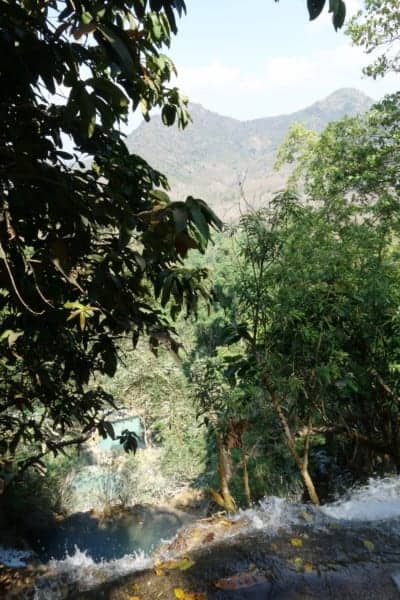 Most never continue along the steep and dusty paths that lead off into the dense jungle, after a while you begin to notice only those who you do meet along the way are local tribesmen, often with guns over their shoulders, heading off to hunt for their food. The jungle becomes very humid and sticky the more we pressed on, several hours of intense hiking lay ahead of us as we stopped a the “Blue Lagoon” a crystal clear azure hued pool that feeds the falls, it would be our last chance for real refreshment! 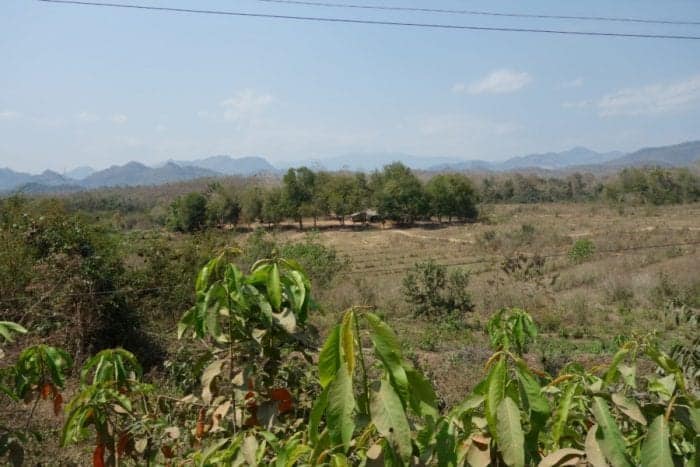 Trekking along the dusty paths we came across many huge orb weaver spiders and funnel webs, a bright green snake that had unfortunately seen better days and well camouflaged stick insects, this was a true jungle trek! Our guide explained to us the simple way of life for the people that called this harsh, rugged and mountainous landscape home. We soon realised just how inaccessible this place would be without his expert knowledge and why we were walking along a trek that had seen only a few western footprints in the past. 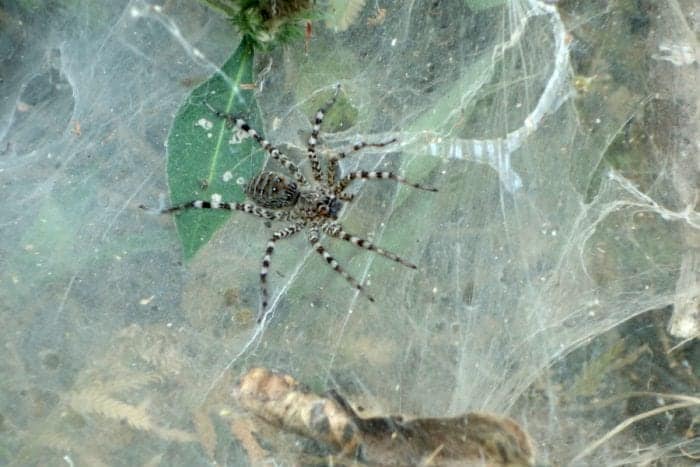 Finishing off in a remote tribal village way off the beaten track!

After a 10km uphill hike through dense forest the ground finally flattened off to reveal a stunning hidden mountain scape and a singular path leading to a tiny village. Passing rubber plantations and farms we were warmly greeted on the outskirts of the village by some children playing gleefully in the fields without a care in the world. 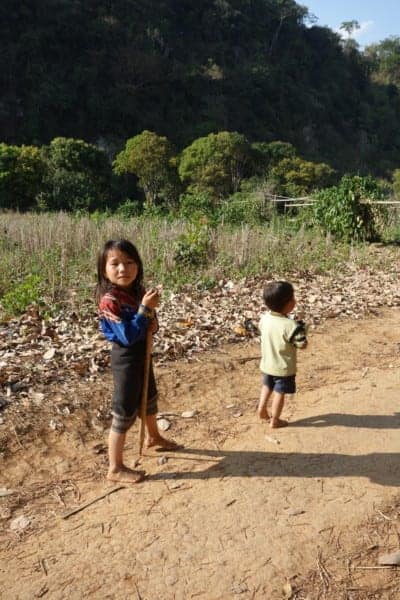 Here life is basic but people live as a strong community. As we entered the bamboo village many people came out to say “Sabaidee” and wave with giggles, not many western faces pass through here and despite only being an hour and a half away from Luang Prabang along a bumpy dirt road they appear cut off from the modern world, living the same life as their ancestors have for thousands of years. 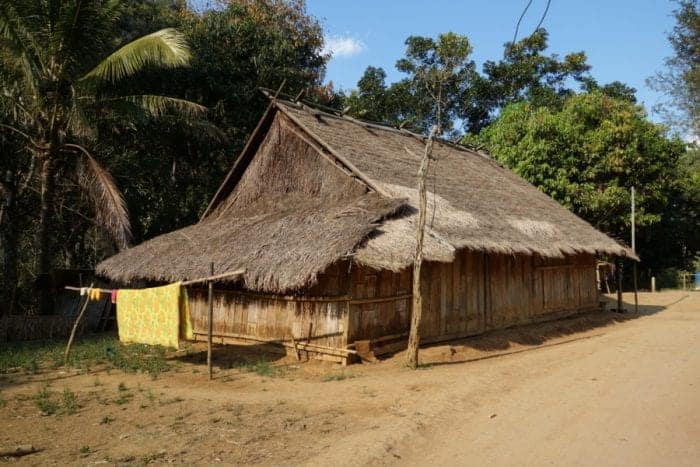 Grasshopper tours offer some of the most intensive, authentic and immersive bike tours in Asia, you can choose from almost any country in the region and from trips that last between a day and over 2 weeks. These trips combines well known sights, off the beaten track adventures, local knowledge and of course great exercise too! Grasshoppers are passionate about cycling and offer only the best quality bikes too as well as well thought out routes on their amazing tours! 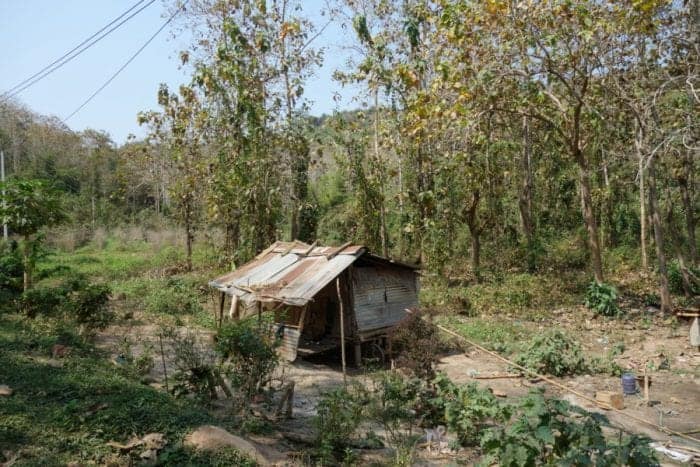 Book your transport across Laos and Asia here:

Have you ever visited the Kuang Si Waterfall in Laos?

Disclaimer: This post was sponsored by Grasshopper tours. As always, all opinions are our own!

Wow, that is an amazing waterfall! I could spend all day there. Rice balls are a favourite snack of mine. But I could pass on that spider:)

Its such a beautiful place, ha ha, yeah, us too!

No I’ve never seen the waterfall in person but it looks magical. Definitely bookmarking this 🙂

It is even more stunning in person! Enjoy!

so you guys did this all in one trip with Grasshopper cause I am a bit confused on what you did with your bikes and how you were able to re-fuel yourselves before the massive hike to the village.

Love the Kuang Si Waterfall, what an amazing site and to be able to swim and discover hidden pools. Amazing

Hey, yeah they pack a lot in don’t they! I will be honest, it’s for those who are quite fit as the bike ride is tiring, you have a swim, walk around the waterfalls and some lunch, then you are back up and hiking on the steep trails!

I have wanted to visit this waterfall for so long! I hadn’t thought about cycling there but that would be so rewarding! What an adventure.

Yes, it was hard work getting up there on the bikes to be honest but it made it even more wonderful in the end!

I always enjoy hearing about then lesser known travel spots before they become hot spots. Those waterfall may quite possibly be the most beautiful I’ve seen and appear to be worth the effort to get there.

It really is one of the most amazing and stunning, that water colour is something you have to see!

That waterfall is so beautifulI I love the unique blue color. Would totally be freaked out by the fish though!!

Yes, really a unique colour and wonderful to see. I wasn’t keen on the fish!

0
Reply
Nina Near and Far

That waterfall is insanely beautiful! I’m not sure how I would feel about the “doctor fish” though, that’s so bizarre!

0
Reply
The Roaming Renegades
Reply to  Nina Near and Far

Ha ha, I was freaked out to be honest but if you keep moving they leave you alone, stop and you get eaten!!

I love how intricate that waterfall looks. It’s not just one constant flow! Your pictures are awesome, and it looks like you guys had such a great trip!

Thank you very much, yes we had an amazing adventure up here!

Wow, what a trip. You two never cease to amaze me on what you get yourselves into. The water is a lovely reward after a bike ride, for sure.

The waterfalls looks just like Aguas Azules and some other ones in Mexico! Have you been there too?

No, not yet but they look amazing!