When you visit Kotor the one thing you cannot fail to notice straight away is the impressive ancient city walls. They rise steeply above the old town up a high mountain track and finishes with the Montenegrin flag flying proudly on the ancient fortification above. This impressive construction not only holds a significant historical place in the past lives of Kotor, but also offers some of the most unique and stunning views of this city set within a fjord.

One of the most amazing things to do in Kotor has to be taking the hike up the city walls, we had been in the city for 3 days and still hadn’t set off up the steep fortification. It wasn’t because of the heat or because we thought it would be too hard. But the fact that the whole mountain was shrouded in cloud! It was frustrating holding our for the weather, sometimes you have to just go out and sing in the rain, but other times you just have to have a bit of patience. We actually ended up extending our stay in Kotor so we could enjoy the city and country to the fullest, we even took a rafting trip in the Tara gorge whilst waiting for Kotor to brighten up! 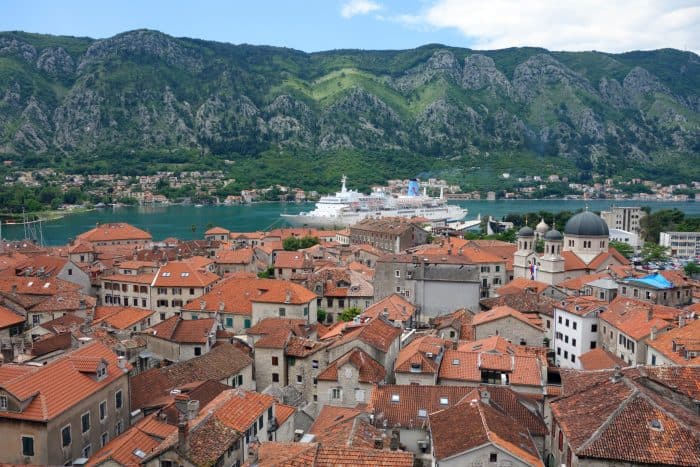 As with many of these things the age of them isn’t so easy to identify. The fortifications of Kotor were built over many thousands of years and included several different types of constructions from ramparts, towers, citadels, gates, bastions, forts, cisterns, a castle, and ancillary buildings and structures. 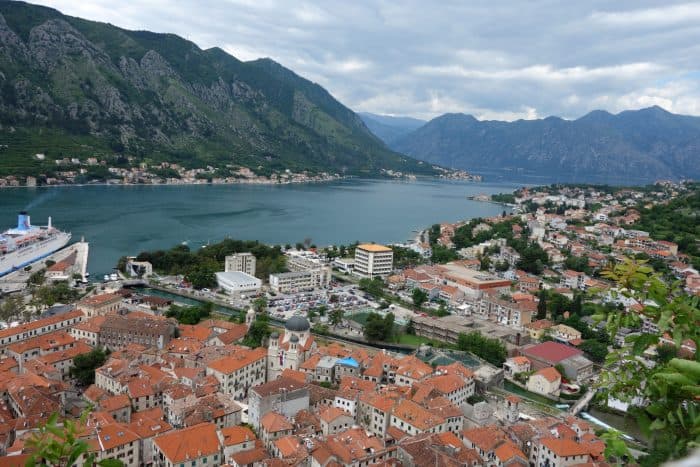 The mountain of St. John was first fortified in the 6th century, however the city received the current structure in 1420 when they became part of Albanian Veneta. Since then the fortifications have been occupied by the Ottomans twice, The Habsburg empire, Napoleon, Russia, France and Austria as well as being attacked by British forces. During the Second World War is was occupied by the Axis forces and liberated on November 21 1944. A date which is now commemorated over the Sea Gate with a soviet star. 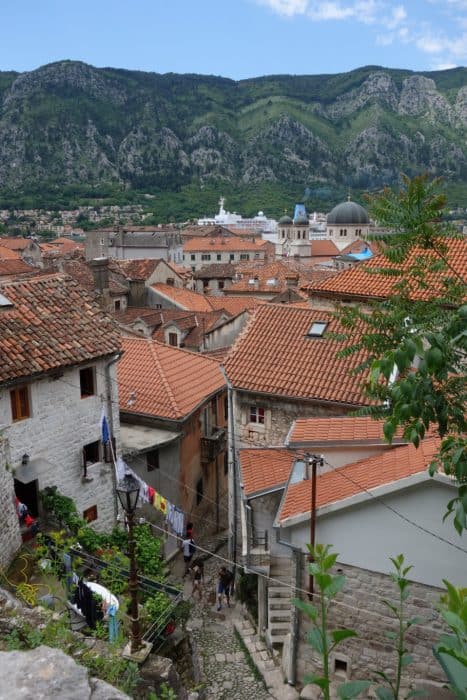 In 1979 it became a UNESCO world heritage site and became a protected place, this was the same year it was hit and damaged by an earthquake. In 2003 it was finally taken off the list of structures in danger due to the many restorations that have taken place over this time. At the time of its listing it has effectively been left abandoned since the Austrian’s left in 1918, suffering from the effects of overgrowth, erosion, impact from the war and the earthquake. 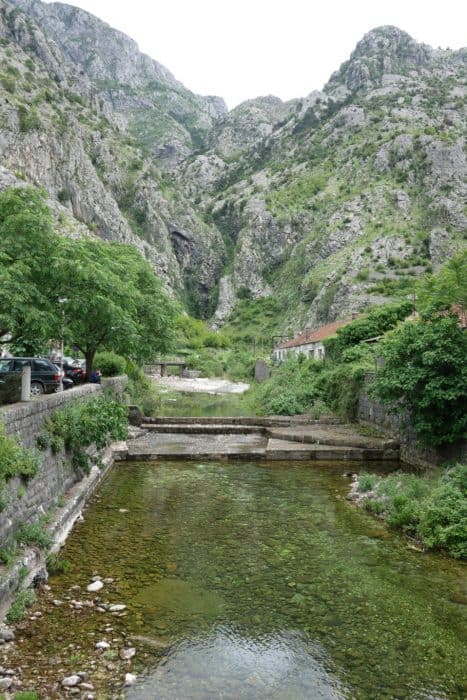 After waiting it out for a break in the weather we finally caught a sunny way, time to finally head for the hills! We set off with a couple of bottles of water for the steep trek up the ancient ramparts. Even as fit and active young people the now searing heat that was now beating down on us left us exhausted. But we decided to make a good pace on the way up so we could amble back down and take more photos when we weren’t breathing as heavily. 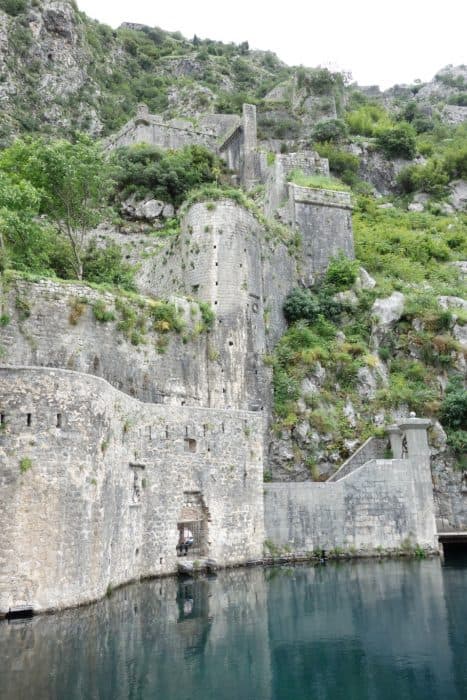 We did keep a good pace almost all the way up to the top, stopping to have a few water breaks and admire the view that had opened up in front of us. Heading to the fort at the top of the walls we stopped for a while to get our breath back and admire the stunning fjord. 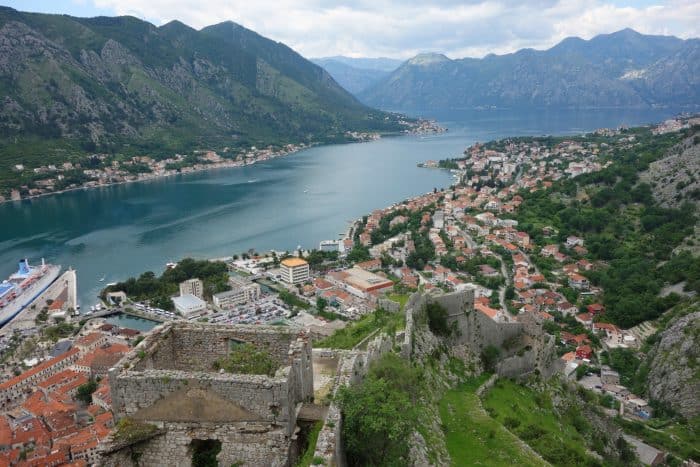 From up here the entire bay is visible and the effect of the old town sitting alongside the mountainous fjord must be one of the most stunning views we have ever seen. We ended up sitting up here, staring in awe, for much longer than we had anticipated. We just couldn’t be peeled away from what we were looking at! 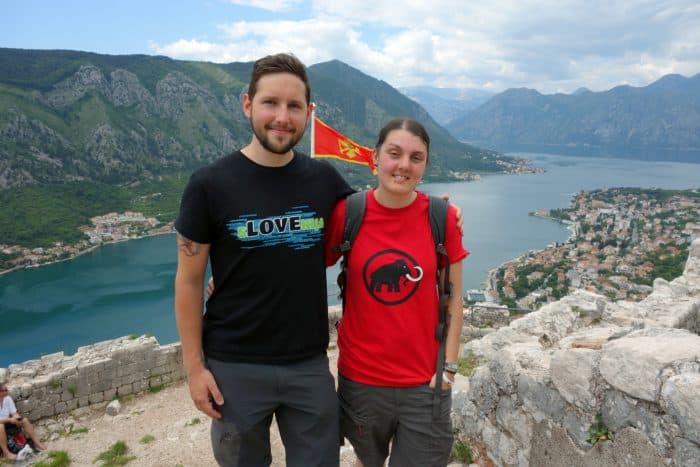 Our route up, hard in the heat, what we saw, how long it took, the amazing views, the fort on top and the view down the fjord, cruise ships, mountains, the sea and beyond.

On the way down we took our time more and enjoyed taking a closer took at the features off the walls, exploring the several different routes, the wild flowers and paying my respects to my Great Uncle George (who I had learnt had passed away that morning) in the beautiful church built into the fortification. I am not a religious person but he was and it was deeply moving to be able to remember him in such beautiful surroundings. 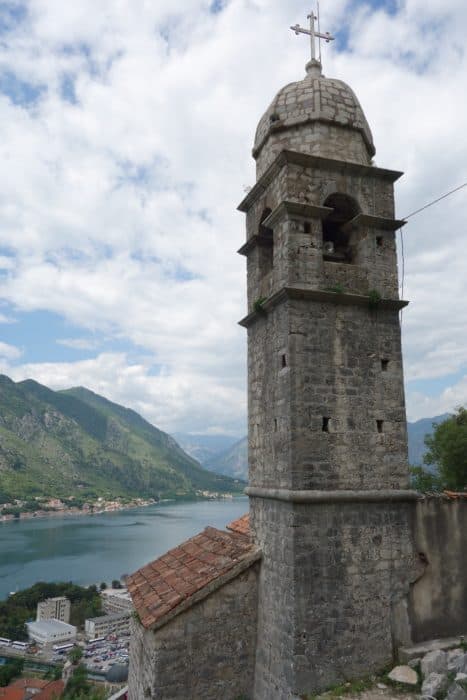 This was definitely one of the real highlights of visiting Kotor and worth booking the extra night for, it really is hard to express in words just how stunning and unique the views are from up here. Montenegro is a small country, but it is has some grand and powerful scenery to rival the best of the Alpine nations.

Have you ever ventured up the Kotor city walls?