When we visited Tokyo a few years back we were kind of a little disappointed we didn’t experience the famous capsule hostels, but hey, we were on honeymoon. But now we are backpacking around Asia and on a tight budget we had the perfect opportunity. Staying in dorms even for the most hardened backpackers can get old, and when we were headed for Bangkok we had nightmares about the drunk 18 year olds we would be sharing them with! But with The Cube hostel we found a modern, boutique and sophisticated hostel that catered for the more upmarket backpacker! Tucked away in the modern centre of the city it offers a tranquil paradise, private dorm, a totally awesome concept and even a pool! Here is a hostel where they did their research and thought of every way to make it the best it could be! A Japanese concept done to perfection

After missing out on visiting a capsule hotel in Japan we really always wanted to try it, but at the same time we had wondered if we would feel claustrophobic and trapped. Well, no worries here because at The Cube they have brought the concept together with that of a hostel dorm in such a perfect way. Here you have a capsule created in its own unique way with a curtain at the end and a spacious and light area in which to relax and unwind. They really did a great job here of creating an atmosphere of personal space and calm within a dorm. 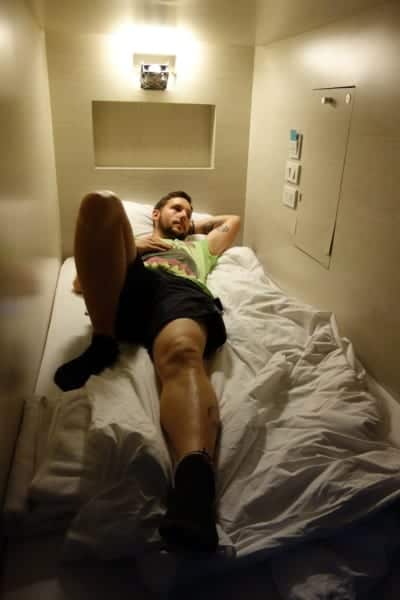 Dorms are a necessary evil of backpacking and yet at the same time they give us the greatest opportunity for social interaction with our fellow travellers. At The Cube they have managed to create a space which despite being shared with up to 9 others feels very private and personal. Once you draw your curtain you could be in another world! This means that for the price of a dorm you get the privacy of a much more expensive private room but keep the benefits of communal rooms. After an exhausting month in China and a whistle stop tour of Hong Kong we were ready for the comforts that a well thought out boutique hostel like this brings! 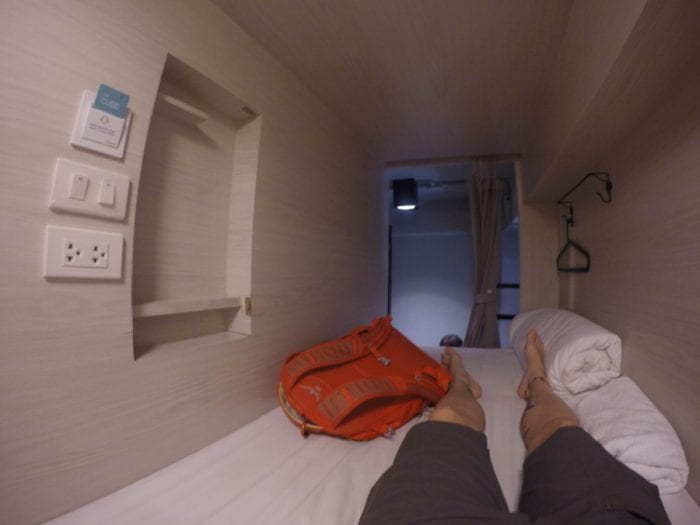 From the moment we caught a sight of the huge glass entrance to the hostel we knew this place was an exceptional example of how a hostel should be. A modern, well designed and sophisticated hostel it feels light years away from those dirty, dingy party hostels that put so many off the idea. Here they take the idea of a hostel and have turned it into the sort of concept that makes you question why anyone would shell out much more for a hotel. Here you get the full boutique experience and the atmosphere here as a result is relaxed, vibrant and peaceful whilst still being friendly and sociable…everything you could ever want from accomodation really! 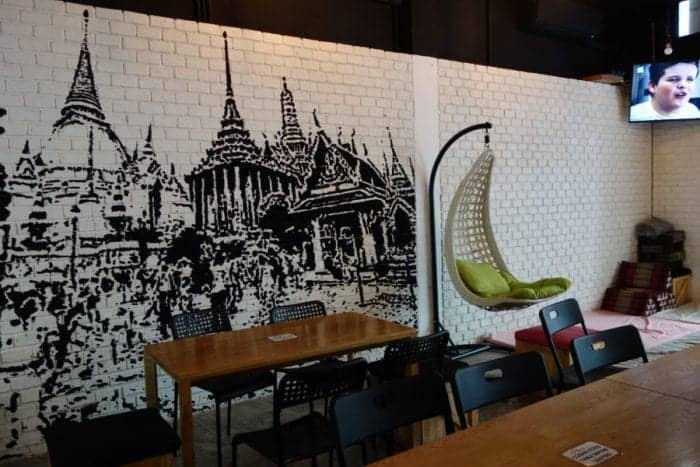 The perfect way to explore Bangkok without the crazy party scene!

After spending 4 months in Eastern Europe we had kind of almost gotten used to being the only backpackers in some towns and even cities, travelling off the beaten track and generally not being confronted by your average “Khao San Road” traveller!! But heading over to South East Asia we have to admit that this was a concert of ours, being surrounded by drunk 18 year olds who think spending 2 months in a stupor on said road is “Travelling!” So coming to Bangkok we were wary of staying in a hostel which was a little more sophisticated than the usual party crowd might be attracted to. Here at The Cube you can be sure of a relaxed and peaceful atmosphere given the location of the hostel and its more boutique appeal! 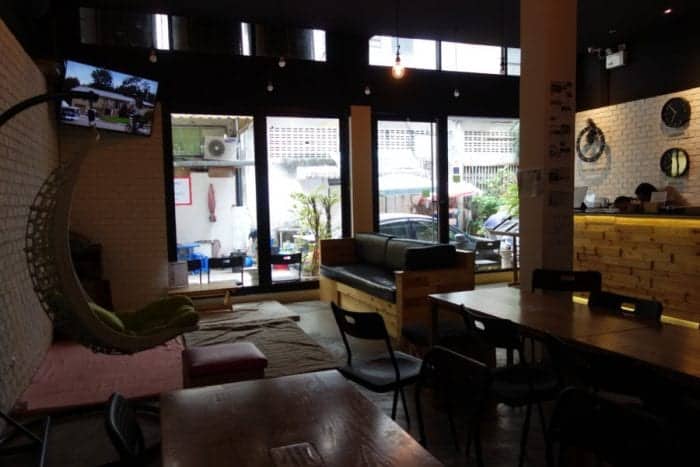 A tranquil getaway in the middle of the big city!

How many hostels in such a large and busy city have a garden and even a pool! Not many! When I skyped my parents from the garden they thought were were out in the jungle! Here despite the central location they have managed to create the perfect space to unwind, relax and recharge for your day of exploring ahead. The pods create a cosy feel that even a large private room could not offer and the lounge downstairs a warm (though wonderfully air conditioned!!) environment in which to chat to new people! 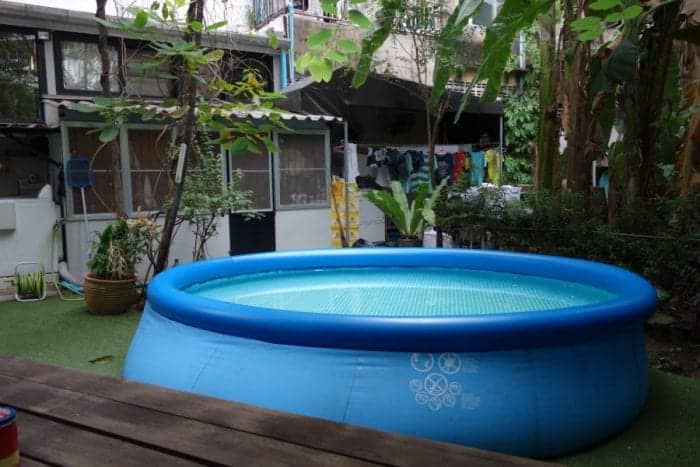 A place in which they literally though of every way to make the perfect hostel!

When I think of this hostel I think of somewhere that has been created by travellers with travellers in mind. It seems to me that they have thought of everything that might make your stay that bit more comfortable and more convenient. In each compartment you have plugs, a light and even a small fan. There is also a lockable fold out table, right next to the plug so you can easily leave your camera/ phone locked away but on charge, or use the table for working on your laptop or reading! There is even a gap in the top of the curtains to let the AC in! genius! 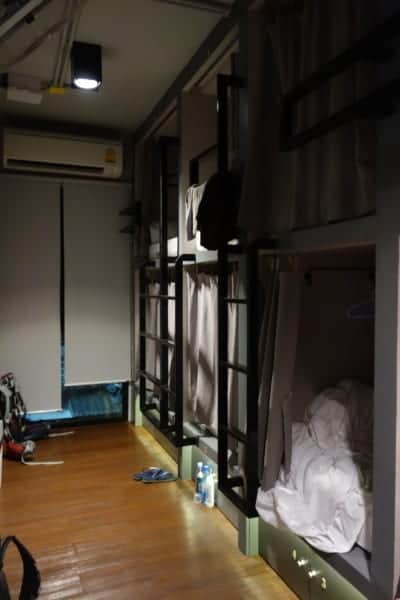 Have you ever stayed at such a perfect hostel that just made your stay that much more enjoyable?!

Check them out here/ More information:

Dorms cost around $15 a night but can start a little cheaper also!

Check out our other hostel reviews here:

HOSTELS AROUND THE WORLD

Disclaimer: This post was sponsored by The Cube Hostel. As always, all opinions are our own!

I’ve also never stayed in a capsule hotel or dorm but I think I should try it sometime. It looks like a unique experience!

Yes, it makes a change from the usual dorm beds and offers some of the privacy we all want now and then!

I have mixed feelings about this kind of accommodation. I think because this particular one closes with a curtain, I would be more likely to try it. It’s the ones that essentially seal you into a capsule that freak me out a bit 😛

They are actually really cosy and don’t feel enclosed at all, some people even just kept their curtain open. I know what you mean about the ones where you are sealed in, I would still like to try one though.

Surprisingly I really want to stay here! I’ve bookmarked this for when I go. I’m clausteraphobic but this actually looks fun.

It doesn’t feel that enclosed at all, just more cosy and nice personal space!

This is definitely a hostel I would consider – and I thought I was well past my hostel days! The little capsules look great – so peaceful and quiet, and they have done a great job in decorating the public spaces. I’ll keep The Cube in mind next time we’re in Bangkok!

Yes, we are still very much hostel dwellers ourselves, despite the odd hotel stay here and there, but are deffo passed our party hostel days and love the combination of privacy and social aspects places like this give you.

Now that is a hostel I could survive in. Loved the privacy of the sleeping arrangements. Upmarket traveler…I learned a new term. 😉

I could just see you there Melody! Get your backpack and lets go!