By now everyone knows about the Angkor Wat ruins of Cambodia, the highlight of the ancient world in South East Asia. But it must come as no surprise that they are not the only UNESCO listed historic sites in the region. My Son ruins, of Champa origin, might not have the grand scale of Angkor, but their history has become intertwined with that of the Vietnam/ American war, which makes this site all the more miraculous. We headed over to the My Son Temples on a day trip from the town of Hoi An.

What are the My Son temples?

Rolling out of one UNESCO heritage site, that of Hoi An we set off on our beloved Honda Blades the 50 or so KM towards yet another UNESCO site. One we confess to knowing little of beforehand other than the name and the tag of “must see!” Sat within the picturesque mountains of central Vietnam the My Son temples are a collection of Champa temples inhabited from the 3rd to the 14th century. 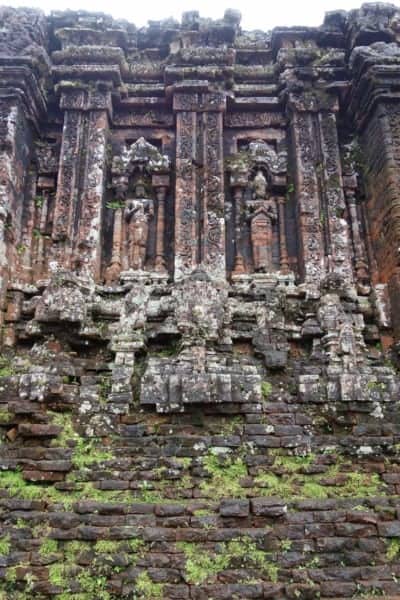 My Son was an important place from the Cham people, a Hindu civilisation and people that predate the country of Vietnam when this region was inhabited mostly by kingdom, tribes and settlements. Many of the ancestors of these people still exist and identify to this day as Cham-Vietnamese speaking their own language but adhering mostly to Buddhism since the 15th century. 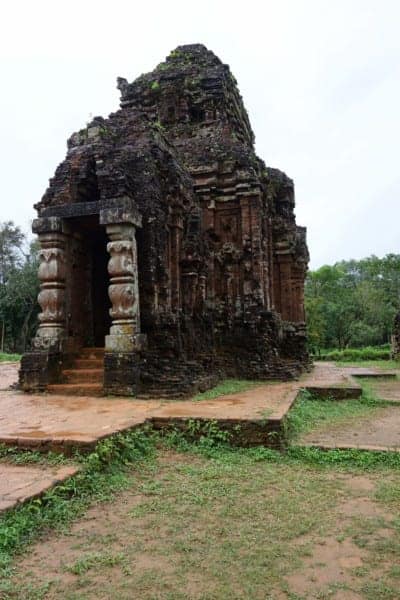 The temples at My Son were dedicated to the Hindu god of Shiva and was the site of many of the religious ceremonies for the ruling kings of the Champa kingdom and burial place for royalty also. My Son temples are also known to be one of the longest inhabited archaeological sites in Indochina, making it in turn one of the most important in South East Asia. In many of the newer structures you can see the encroaching Buddhist influence as the religion swept this region towards the end of the Champa rein. 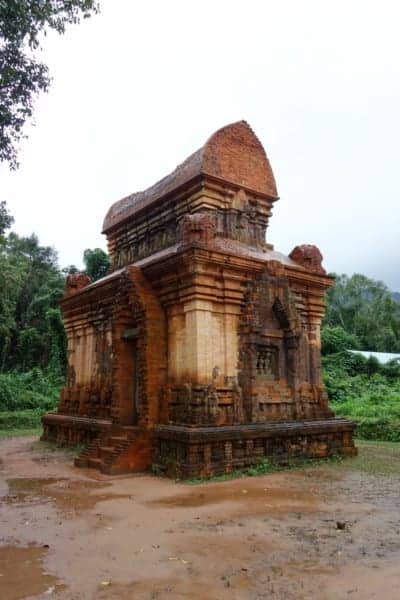 The roles they played during the war

The “ruins” are of course to be found today in various states of decay, but wandering through the peaceful mountain valley, the trickle of the stream and the whistling of the wind in the trees its hard to imagine this place as anything but peaceful. Then you come across huge and unnatural craters in the surface of the earth, much more undulating that the naturally flat lands of the riverside. You notice the smashed pieces of ornately carved stones and the towers being propped up my layers of scaffolding. 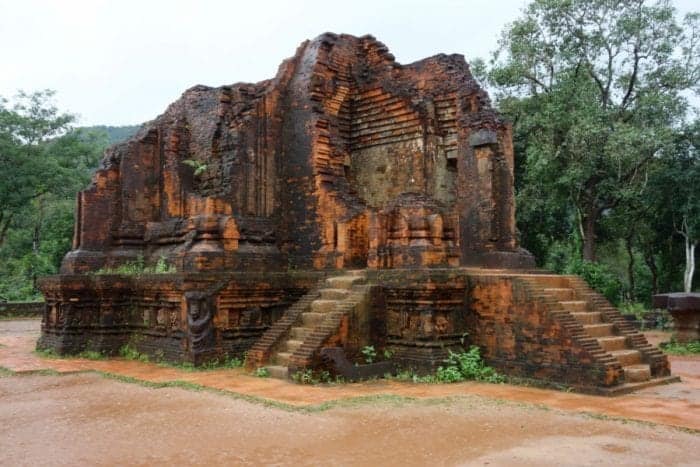 The site here at one point number up to 70 intricate and beautiful temples. That was until the Vietcong began to use this whole area as a base. Of course, the Americans reacted to this in the only way they know how, by dropping carpet bombs on the whole complex. Luckily many of the structures were built of only bricks and without mortar could be painstakingly pieced back together by conservationists in the years following the war. This is just another reminder of the cost of this deadly war on not only the people but their history and culture too. 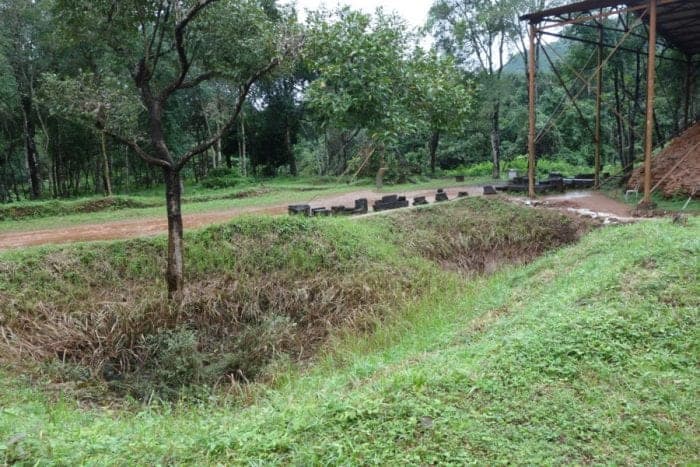 Much of the site remains in its original condition or has been lovingly restored by a team commissioned by UNESCO. The temples have that overgrown forgotten world feeling to them that makes places like Angkor Wat for example just so special to visit. That crumbling aesthetic of a civilisation lost to time being discovered hidden amongst the mountains and jungles of this region, it really is quite a special and now thankfully peaceful place. 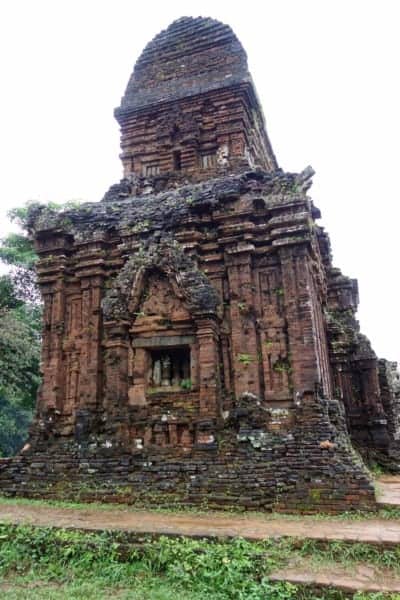 Visiting the My Son temples really gives you the chance to step back in time and walk in the footsteps of a people all put lost to the modern world. To see architecture like no other and experience a meeting point of cultures and religions. The bright red brick of the temples contrasts sharply with the green of the lush countryside that surrounds them, a truly beautiful place regardless of your interest in history. Visiting the nearby museum is also a worthwhile stop off point for some context to the ruins as well as images from before the war. 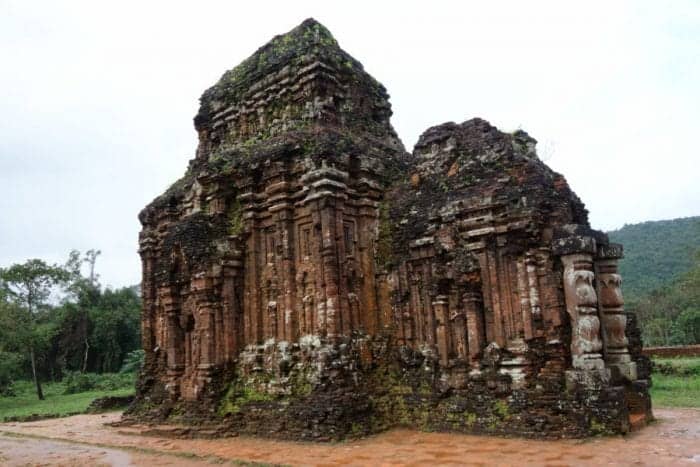 How to visit My Son temples / Cost

The My Son temples lie around 50km from the town of Hoi An, a tourist hotspot most are likely to at least pass through on their way through Vietnam.

We were travelling the county on motorbikes and as such used our own bikes. If you can we highly recommend taking your own transport here and exploring at your own pace. The tours offered by the many companies in Hoi An will leave you rushed and crowded! 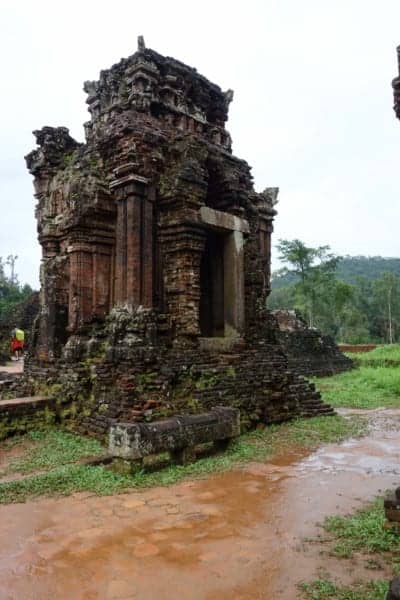 Here are your options: 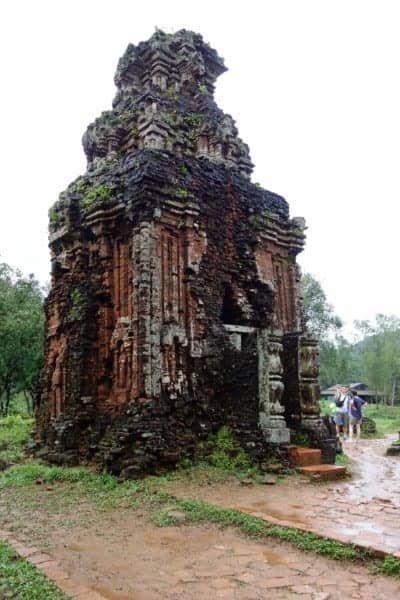 Have you ever been to such a historic place?

Thank you very much!

I hate that I missed these while I was in Vietnam! They look so interesting and have such a cool history. Next time, next time. A reason to go back!

Ahh, maybe next time then! Yes very interesting with ancient Vietnam and also the war

I’ve seen the Angkor Wat ruins in Cambodia but I still haven’t been in Vietnam. Have to visit this place when I go there!

They are not quite on that scale but still very impressive!

I’m so glad you wrote about this site as I’ve never heard of it. The ruins are beautiful and have such an interesting history. I would be one to avoid the crowded tourist bust, so I am glad there are other options, and they are much cheaper.

Its a great piece of history that seems like only those on tour groups end up finding out about!! Making your own way is so much more enjoyable!