Hoi An Vietnam was one of those places that whilst travelling through Vietnam kept coming up time and time again, each person we spoke to seemed to come to the same conclusion, a nice place but actually quite horrible in many ways. Knowing how frustrated we get at being constantly shouted at to buy things, called into every restaurant you pass and not being allowed to walk for 10 minutes without someone wanting you to jump on their motorbike or cycle rickshaw!

Exploring the pastel shades of this crumbling French colonial town: Hoi An Vietnam

A UNESCO listed town the beautiful streets of Hoi An Vietnam are a wonderful example of a South East Asian trading port, here you can wander the streets of this beautifully crumbling town and discover one of the best preserved Vietnamese towns of this era. The pastel shades of yesteryear, the lanterns swaying in the gentle breeze and the glistening cobbled streets that the lights sparkle of. Hoi An in itself is a truly beautiful place to visit, the rivers and canals cutting through the town just add to its mystic and draw, the crumbling aesthetic is as charming as it ever was and if you allow your imagination to run away with itself you could be wandering in a bygone era of Vietnam, before the war, before the hordes, in this maze of mellow yellow streets. 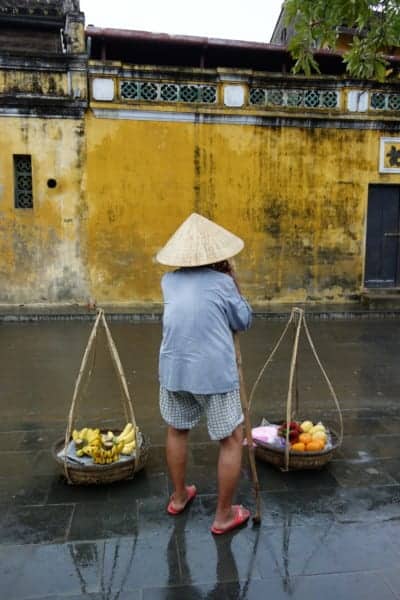 Discovering the layers of history in Hoi An Vietnam

Built from the 15th to the 19th century Hoi An Vietnam has many layers to the fascinating history it has gone through, here you can clearly see the French influences alongside traditional Vietnamese architecture and Chinese styles. It is a mixing pot for the cultures that have dominated Vietnam and Indochina for years, a port in which to a large extent time has stood still and it had some how managed to weather the mass industrialisation of much of Vietnam and Asia. A time capsule layered with degrees of history, where wooden boats still float down the river, traditional clothing and the quintessential Vietnamese wicker had is adorned my almost everyone and the colour pop and dance off the preserved streets. Sounds like the most wonderful place in the world, it would be if it weren’t for tourism! 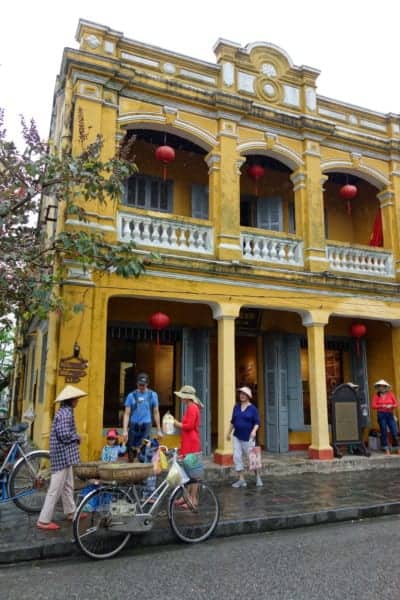 One of the highlights of Hoi An Vietnam is the light show at night, traditional paper lanterns of all colours of the spectrum hang from every possible awing. Walking along the main streets of the town is like stepping into a fairytale, made even more stunning after a light shower turned the ancient cobbled streets into a mirror, doubling the beauty. 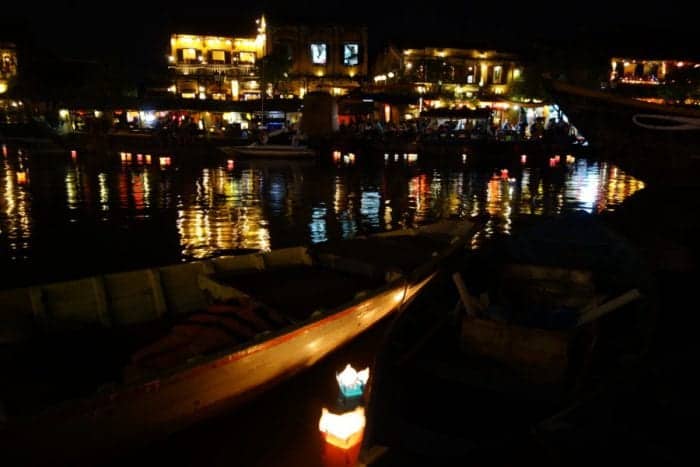 Along the river the amazement continues, little paper boats carrying candles light up the waters as they meander through the town, larger and more intricate paper lanterns of dragons and lions line the way too. It really is quite a magical sight and one the town is famous for upon its monthly festivals which now seem to have spread to a daily occurrence. Great for the tourists but again a sign of how something so special has become rather commodified. 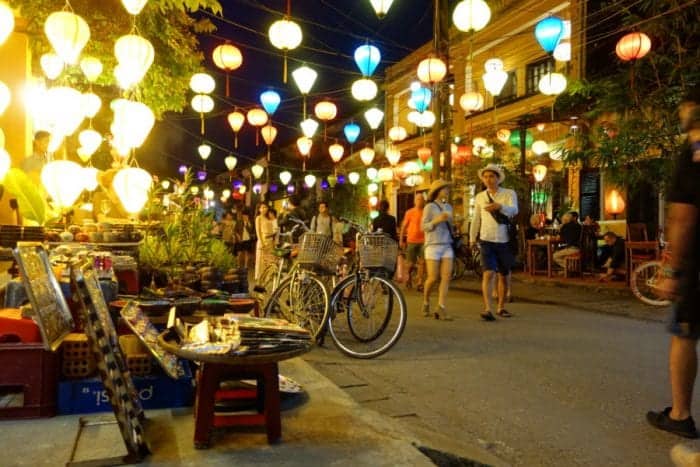 A bitter sweet town that left us looking forward to leaving!

In truth Hoi An Vietnam is a lovely place on the surface, if I could float above it, far away from the noise and hassle I would have adored it. To sit back on a bench and take the place in would have been amazing. But for all the time we spent in the area waiting for our visa extension we actually only ventured into the town twice, preferring what is mentioned in the section below!!

Now, as a “tourist”, despite any of our protests against that title there is no doubt that however much we try, we are just that, whether we also be a “traveller” too. I do find it a little tiring when people describe themselves as “a traveller and not a tourist!” So in this vein it might seem again hypercritical to lambast a place because of tourism and at the same time be stood there exploring the place as a tourist/ traveller. But honestly in Vietnam we have found the biggest issue not exactly with the tourists themselves, but with the dark side that they bring out in the locals. Vietnam for us has been a country on contrasts, of amazing and awful, and usually the awful has been a result of the attitude of many locals we have met.

The people who live and work in Hoi An have ruined the place, they hound you as you walk down the street, pushing things in your face to buy, literally grabbing you and trying to drag you in to their shop, shouting “money” at you, asking for money for you to take a photo of them, often only wearing traditional clothing just to pose! The lanterns on the river are great, apart from the old women hitting you with her stick and forcing a candle into your hand.

You can’t just wander the street without someone shouting “motorbike” or even “opium”, tailors con people with their deals, tour companies swindle even more people. The potholes are endless and often the locals so aggressive in their pursuit of the riches they see you as that they fail to see how they are turning a lovely place into a zoo than many will just simply avoid in the future, as they may well the whole country as this virus seems to spread to anywhere remotely on the tourist/ traveller map. Which is one more reason getting the bikes and visiting the truly unspoilt areas of the country was really rewarding and offered us a true picture of Vietnam! 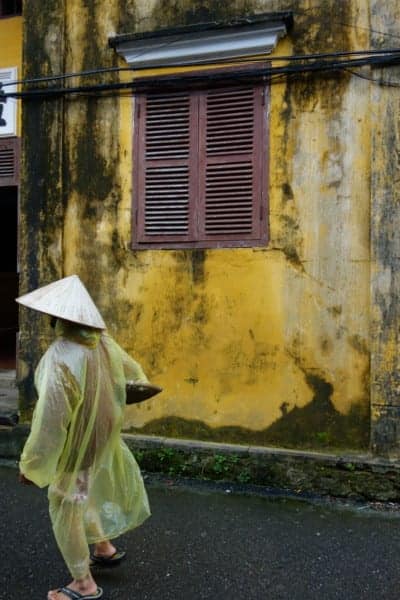 Getting out and about exploring rural life in Hoi An: A highlight of this area for us!

Having our motorbikes throughout Vietnam proved to be a deciding factor on whether or not we actually liked the place or not. The main epicentres of tourism were fraught with aggressive selling of tours, scams, price gouging and general coldness towards foreigners unless you had money in your hand. On the other hand get into the countryside, the isolated villages and mountains and people just wanted to wave, say hello and met you. No thoughts of us as just money on wheels, but genuine intrigue and warmth.

Hoi An is a small place and is saturated with all that is bad about visiting Vietnam, but it is also surrounded by beautiful and unspoilt countryside, rice paddies for miles and locals much more open and freindly. Taking our bikes and exploring the surrounding villages, many of which have seen very few western visitors was one of the most rewarding experiences of our time in this region. Look out for a full post about our Jack Tran Eco tour too in which we really got under the skin of local farming, fishing and wartime life here.

Another great day trip from Hoi An is the My Son Champa ruins 50km away.

Have you ever been to Hoi An? How did you feel?

Visited Vietnam last month and I’m glad to say I didn’t have that experience in Hoi An. Maybe because I’m Filipino and — in their eyes — poorer than white tourists? LOL

Mark went to Hoi An waaayyy back in 2001, and it really wasn’t as bad back then as how you describe it is now. It’d be interesting to learn how these places end up like this. Lack of government funding? Economic deprivation? Simply too many tourists? Or just some weird black-hole of greed that opens up and consumes a place? Your comment about being tourists and therefore a part of the problem really resonated with us. It’s sometimes best to leave these places to their own devices! Cheers for a great post.

Yeah I would have loved to have visited before it seems to have exploded. Maybe the rise in Chinese tourism has a factor, they seem to really flock to places once they are deemed popular and spend a lot of money too. Its hard to say for sure but it is a shame but we did still enjoy seeing the place. Thanks for your insight.

We visited Hoi An about 18 years ago, and from the sounds of this post I am so glad we did. My overwhelming memory of the place was how much it rained, but I don’t remember being hounded. What a shame…

Yeah I really wish I could have visited many years back, its a shame and I am pretty sure it is only going to get worse.

I totally understand how hard it is to visit a place and see how changed it is when overrun with tourists. The locals being so poor start getting aggressive in an effort to make money. It’s happening in so many places now as a result of tourism. Thanks for not sugar coating it and sharing what you experienced. I wish there was an easy answer.

Yes, it really the question of what can be done and that is such a hard one. I totally understand how the locals feel like this and become aggressive and greedy but I think really they need to realise that in doing so they will actually push people away rather than encourage more people to come in the long run. However getting that message across isn’t easy. Its like telling a street dog to take his time with his food because he will get some more tomorrow, he doesn’t know that he will.

Very eye opening. But it’s great to have this honest and not always-great-view of places you’ve visited. Thanks.

Thanks, yeah I always try to be honest. I didn’t hate it but it was certainly not what I expected from the beautiful imagery the town is promoted with!