Riga was a strange one for me, I had been due to visit a few years back with freinds when the Icelandic volcano blew up and ruined our plans!! For a long time I had wondered what I had missed out on and always dreamt of finally visiting! So here we were, in this wonderful, invigoratingly modern and beautifully historic centre of the Baltics at last! And boy was it worth the wait!

One of our absolute highlights of visiting Riga was the folk bar we discovered. Sipping on locally brewed beers, eating traditional fried black bread with a garlic dip whilst listening to Latvian folk music…all whilst in a dark wooden building in the centre of the old town that has stood on this spot for hundreds of years. What an incredible way to experience local Latvian culture in a warm and welcoming environment. Ala is reasonably priced and popular with locals as well as visitors looking for a slice of authentic culture! 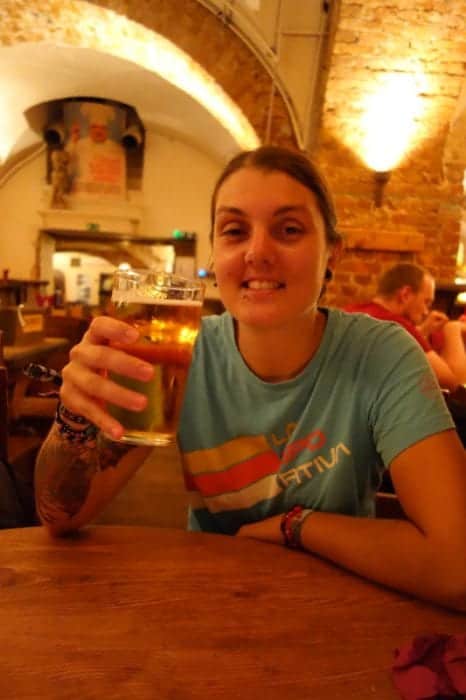 We love free walking tours but often they can feel a little samey and bland, or in our case often cover the areas we were planning on visiting anyway. But when the guys at our hostel mentioned the alternative walking tour of Riga our ears pricked up. We love the idea of discovering other areas of the city and their history that we would otherwise never have known about. This walking tour took us out to the traditional Moscow district with its “Stalin’s Birthday Cake” style building which is part of the same series as seen in Warsaw and Moscow. The wooden buildings of this area of the city tell the history of the city, how they were built to be set on fire if the city was attacked, something that happened by accident when a solider spotted a herd of cows in the distance! 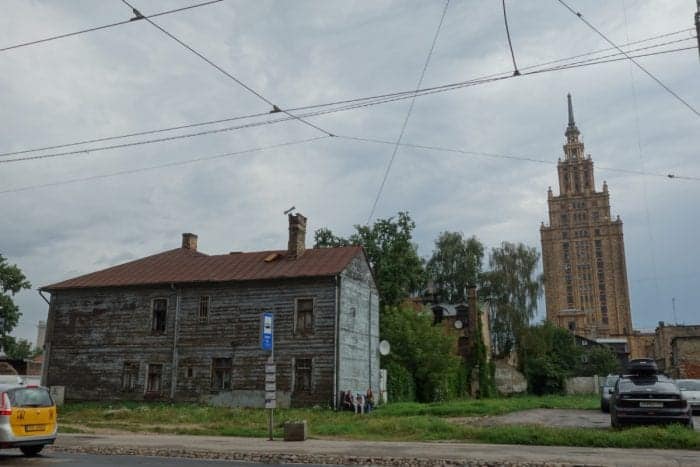 A UNESCO listed heritage site the markets are probably one of the most important of the city’s 20th century constructions. Many don’t realise the sheer size of the 5 huge pavilions which make them the largest markets in Europe, even surpassing those of the Grand Bazaar in Istanbul at 778,000 sq ft and housing over 3,000 stalls! 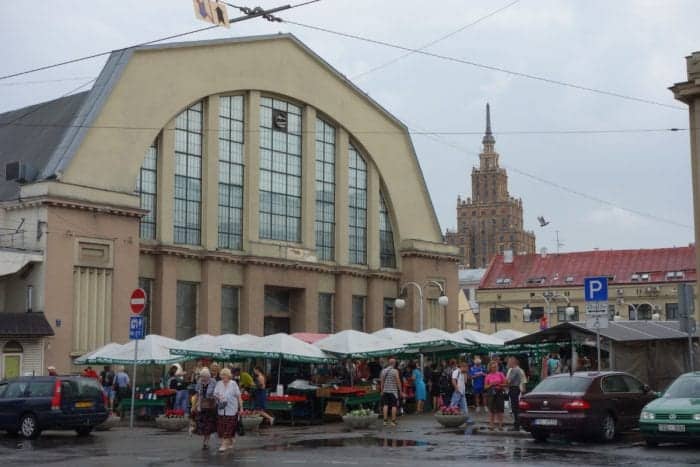 The huge structures are each home to a different selection of trades, one selling locally picked vegetables, others with a huge selection of wonderful cheeses and even a pavilion of nuts and dried fruits, as well as meat, fish and clothing! The most interesting thing however about the markets is what they are made from, built from 1924 to 1930 out of old German Zeppelin hangars they are now 5 of only 9 remaining in the world and incorporate the Art Deco style of the era! 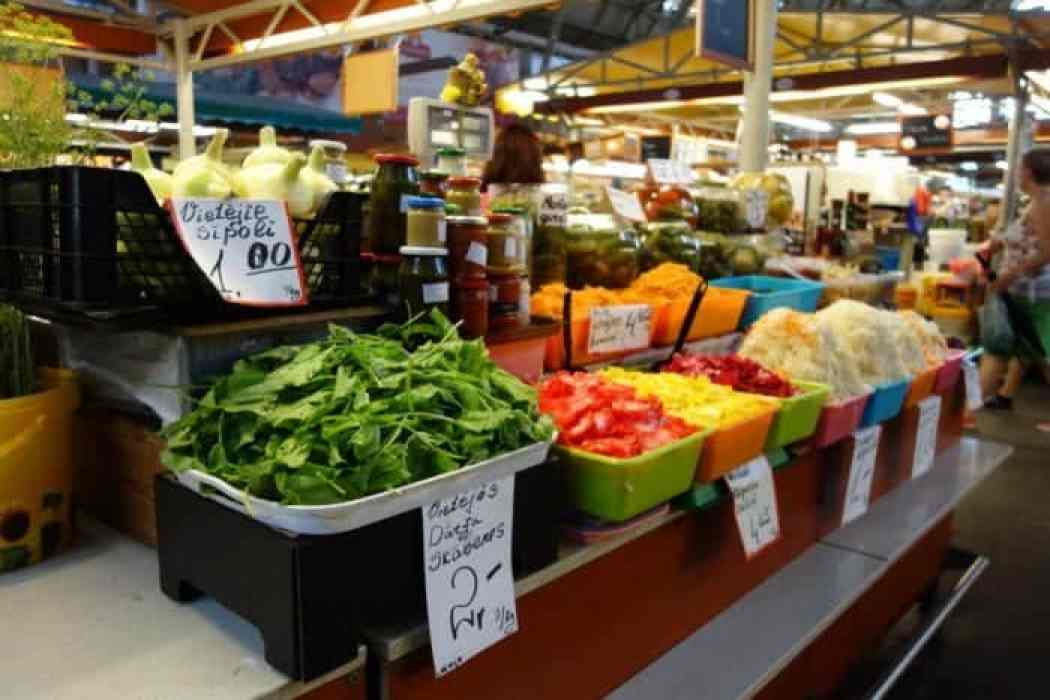 Wander around the beautiful and peaceful parks

Riga is a beautifully green city with many well groomed parks being located very centrally. On a warm summers day or a snow covered winters afternoon there is no better place to take a stroll or relax after a hard day of exploration! In such a bustling city that perfectly peaceful area of leafy green paradise is just around the corner. Bridges, flower beds, fountains and rivers with meandering paddlers set a stunning scene against the pastel colour of the old town. The loveliest ones to check out are: Bastejkalna Park, Vermanes Park,  Mezaparks, Kronvalda Park and many more! 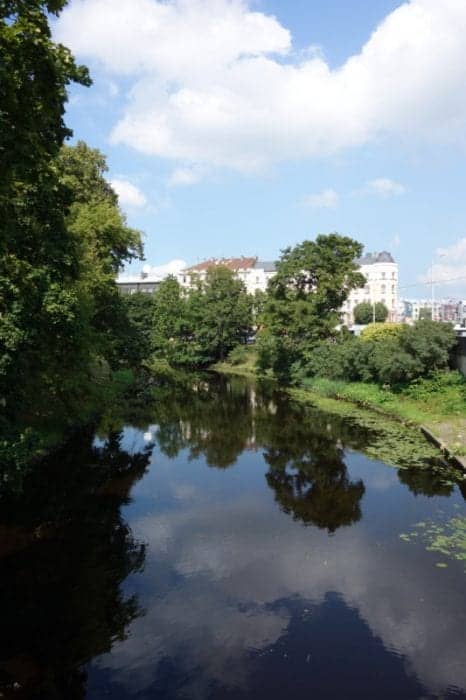 Look up at the freedom monument

Latvia has gone through years of occupations and struggled through many generations for independence. Built in 1935 the freedom monument is to honour all those killed during the Latvian war of Independence from 1918-1920. The statue is an important symbol of the freedom and spirit of the Latvian people. Having some how miraculously survived the Soviet occupation of the country it must have been an ironic and painful sight during those testing years. But now, a focal point once again of the city for gatherings and ceremonies, it is once again a proud symbol of the resilience of Latvia and their independence! 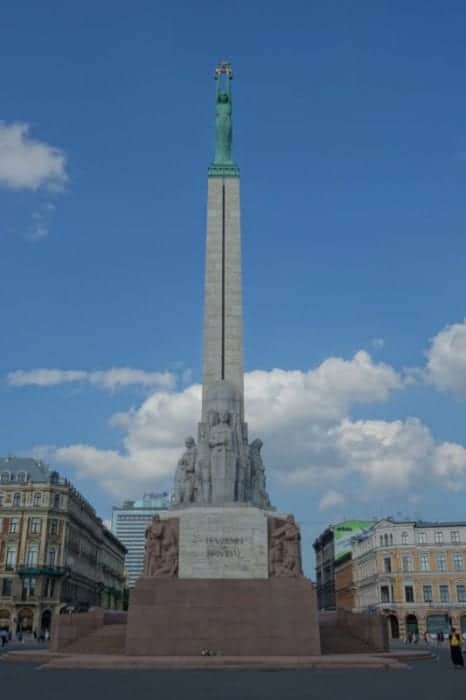 See the stunning details of the Art Nouveau district

After the ancient cobbled streets of the old town, the wooden buildings of the Moscow District comes the equally historic and unique Art Nouveau district. Riga is a city of sharp contrasts, a modern and booming capital with a more western feel than much of Eastern Europe but with well preserved historical feel. Elaborate, flamboyant and featuring a detailed and fancy array of gargoyles and naked women, over a third of the buildings in Riga belong to this rich and beautiful style. A result of the financial boom of Latvia, the fashionability of this style at the time and the lifting of a ban of masonry buildings outside of the old town all collided to bring about the construction of these many stunning buildings. Many of which now serve as Museums, Educational institutions and, even Hotels. 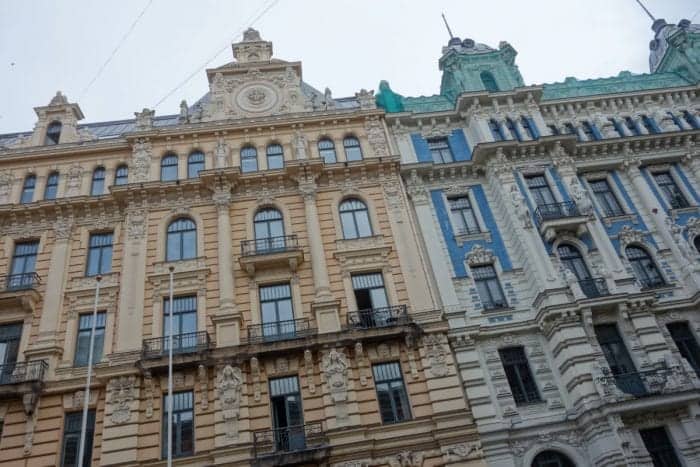 The beautiful Riga Town Hall square with the house of the Blackheads!

One of the main attractions of the stunning UNESCO listed Riga Old town the house of the Blackheads and the surrounding buildings are some of the most important and beautiful. The original building was constructed in the 14th century and got its interesting name from the brotherhood of the Blackheads, a guild for the unmarried German merchants of Riga, then a part of the German empire. As as result of the bombings of the second world war the ancient building was turned into a shell of a ruin on the 28th of June 1941 and was further destroyed by the Soviets in 1948. Rebuilt from 1995 to 1999 in an authentic and sympathetic style this grand building is now back to its original splendor as a historic monument of the city. 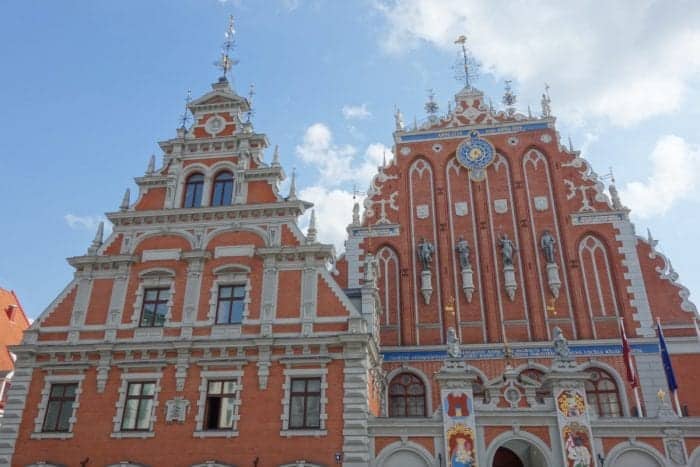 A symbol of the city and one of the most prominent features of the stunning Old Town the spire of St. Peter’s church can be seen from all over the city. Dating back to 1209 the church has undergone several extensions and reconstructions having been effected by city wide fires, lightening strikes, wars and occupations. The distinct style of the church reflects the different periods it has existed through such as the gothic, Romanesque and Baroque styles. Climbing the hundreds of stairs to the top also reveals a stunning panoramic of this amazing city! 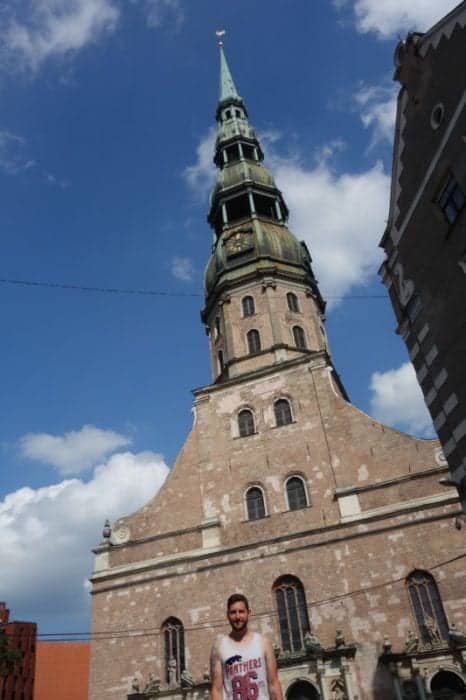 Have you ever been to beautiful and charming Riga? 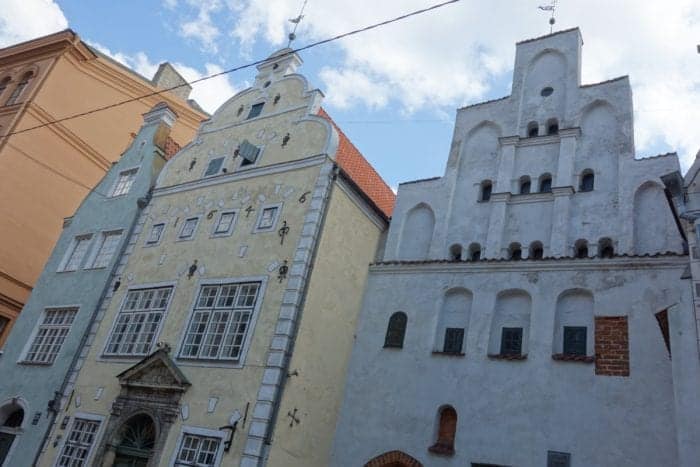 Riga looks absolutely interesting! It is so close from where I am currently living (Helsinki but riga is about 6 hours, 5€, bus drive from Tallinn!!) I would really love to visit!

You should visit, it has lots of Scandinavian influences but it is really cheap and we preferred it to Helsinki! Tallinn is wonderful also, probably even nicer!

Great read! I was in Riga a few years ago, but am yet to make it back since. This post gave me the little boost of inspiration I needed. Thanks!

Thanks, yes it is a lovely little city isn’t it, so glad we finally got over this way.

I have never been to Riga nor any of the Baltic countries. I’m glad they’re getting positive feedbacks from travelers because many people believe that they are a dangerous country. Thanks to Hollywood movies portraying them in a bad light. Anyway, thanks for sharing your trip.

They couldn’t be any less dangerous and are the most westernised of the Eastern European states! Great countries!

Yes, it is beautiful and the people very warm!

Riga has been on my radar lately. I would definitely enjoy wandering the markets and around the parks. What was the weather like while you were there?

I should have visited a while ago and was so disappointed! So glad we made it over, it was really hot when we went in the summer!

What is Latvian folk music like? I’m so glad you got to go there after your plans were thwarted last time! What a cool place. The architecture is quite something!

It’s amazing when combined with beer and good food!! Love this place and so glad we got over there eventually!