After exploring the wonderful streets of Bolzano for a few days we happened across an amazing and intriguing image of what looked like some sort of alien formations. We figured such an impressive and strange natural phenomenon would be high up in the in accessible snow covered mountains. After inquiring as to where exactly we might find them we realised that not only were they quite close, but the ride and hike along the way was one of the most spectacular and yet easily assessable in the area…here’s our wonderful journey to these rather odd landmarks!

Soaring over the city of Bolzano the 20 minute cable car ride is one you will not forget for a long time. Heading up the steep mountain out of town your first view will the of the amazing medieval streets encased in the mountainside. Seeing it from above really gives you a sense of the scale of the city that its quaint and narrow streets hide. You can also see the wonderful blue river that lazes its way through Bolzano that makes this alpine city just picture perfect! 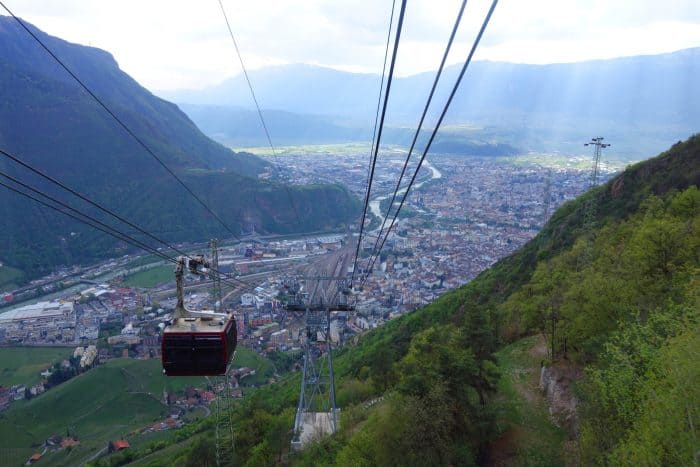 As it pulls further away from the city and towards the village of Oberbozen the jagged snow capped peaks of the Dolomites flash into view behind the green local mountains. Up here the larger perspective of this vast region becomes clear, mountains rise as far as the eye can see, swinging high above the rolling vineyards below you really get a sense of the immense grandeur of nature! 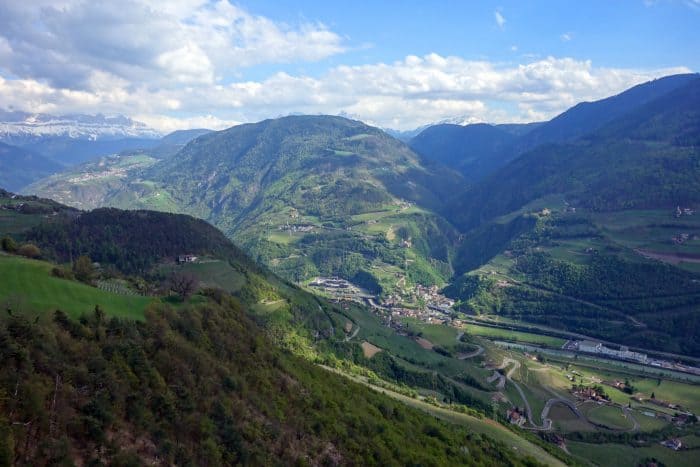 As the grape farmers tend to their crops below, cow bells ring out and old mountain chalets and huts cling to the steep peaks the tiny village of Oberbozen and its onion domed church come into view. The cable car continues for much further back than you might have originally anticipated, but with these views, who wants to get off! 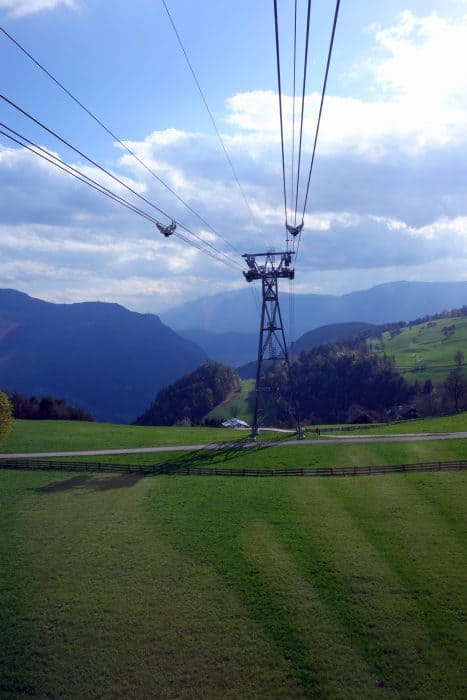 Just after disembarking the cable car it is time for a step back in time to 1907, the year this wonderful light railway line opened. Even today the originally tiny wooden carriages carry tourists, hikers and locals alike down the scenic track towards the tiny hamlets along the route. It is hard to even imagine living in such a place, taking a cable car and wooden train into work each morning and waking to some of the most stunning views in the world! 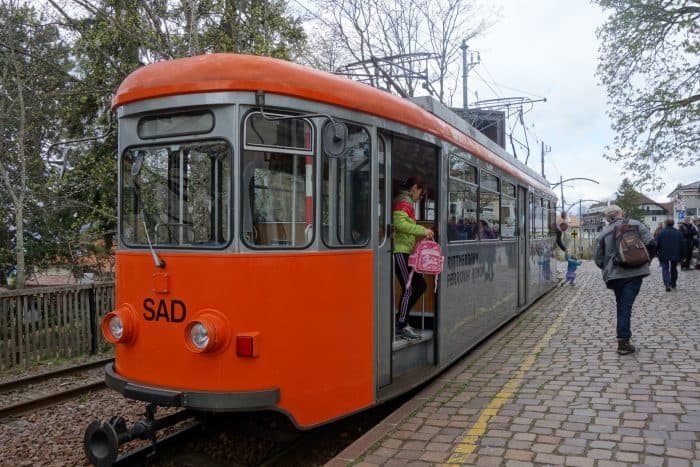 As the train winds its way through the alpine meadows of the Oberbozen region you are constantly flanked by the rugged mountainside to the right and tiny traditional villages dotted here and there to the left. The ride really is like waking up and finding yourself alongside the Von Trapps in the most dream like setting! 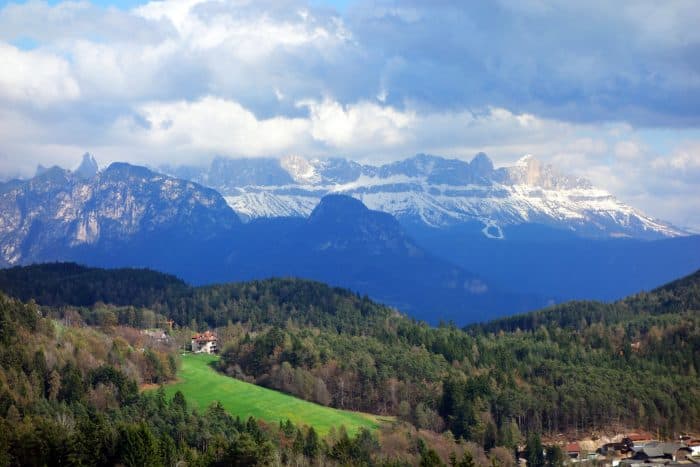 After disembarking in Klobenstein it is time to start the easy and relaxing half and hour hike over to the pyramids. Following the number 24 trail it takes us through the streets of this lovely little village, alongside the traditional wooden houses and gardens of the locals. Most are out tending to their land or preparing for the presentation of a local Ice Hockey trophy which this proud alpine village has brought home. A wonderful glimpse into the up here is to witness the locals wearing the curious combination of lederhosen and Italian flags! 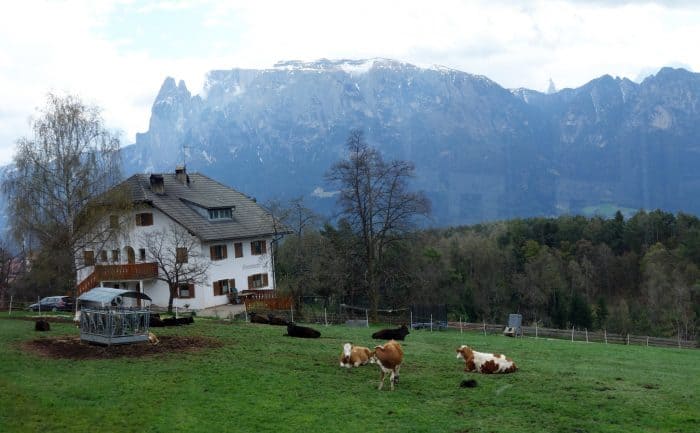 Once outside of the village the hike continues through a short forest and once again alongside buttercup filled meadows complete with cows grazing peacefully with the dramatic scenery beyond. 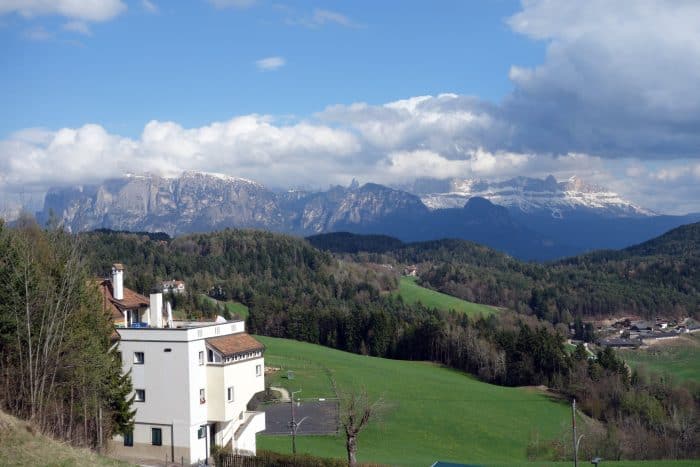 Only 30 minutes later and we catch the first peak at the pyramids from the corner of a barn, not long now and we can set eyes on these weird and wonderful formations! From the constructed wooden viewing platform the terracotta coloured obelisks pierce the sky with impossible defiance. Balanced teetering on the top of most of them is a rock that appears to be on the verge of falling at any moment. These really must be seen to be believed, set again the stunning green and blue backdrop the exposed and sharp pointed dirt stands out like an alien construction! 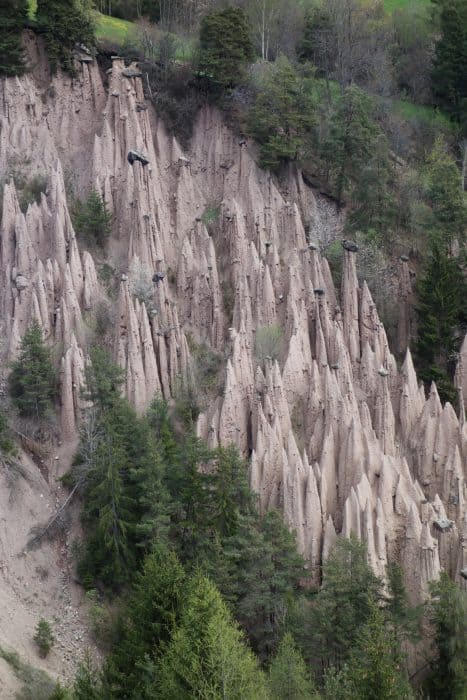 Europe’s tallest earth pyramids are a testament to how nature can seemingly at random create the perfect storm of conditions to create the most miraculous of constructions! The perfectly shaped pillars on the Renon mountain form from deposited clay and a perfectly placed boulder right on top! They began their life after the last ice age with the glaciers melted and left the clay along the mountainsides. When the soil dries out these clay slopes become as hard as rock, but in periods of intense rain the mass of soft mud slides down the hillside. Here the key to the creation of the pyramids is the rock on top! This shelters the pillar from the rain and protects the column below it, as the surrounding mass is carried away it leaves these impressive and mysterious formations! 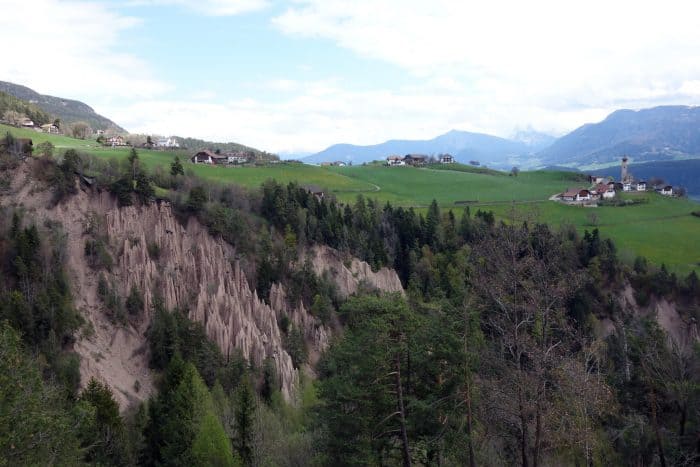 These formations took thousands of years to form from periods of intense rain and prolonged heat…plus quite some luck! it is estimated that main of these are upwards of 25,000 years old! The landscape here is still continuing to develop, as the teetering rocks eventually tumble the pyramid below quickly washes away, but with the rain that takes it away another will grow in the hillside above it! 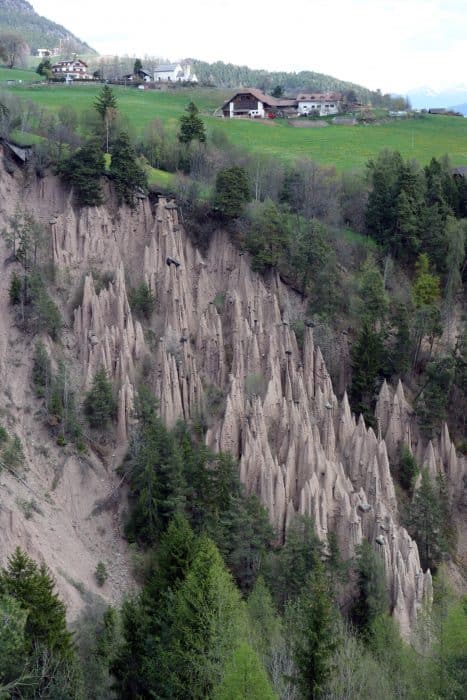 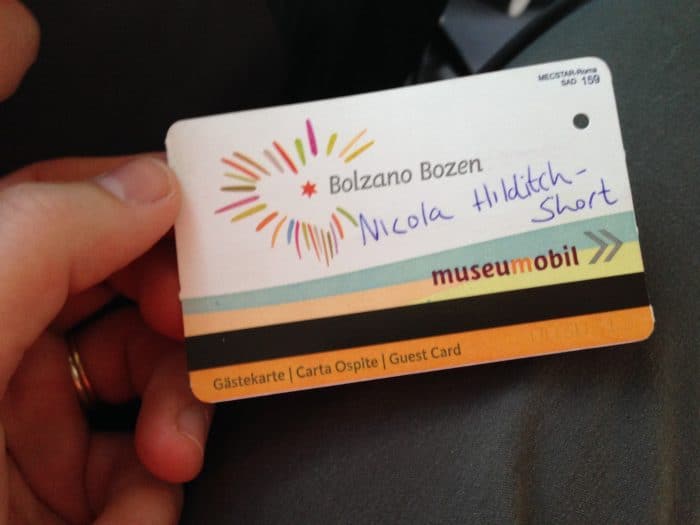 Have you ever seen this natural phenomenon? 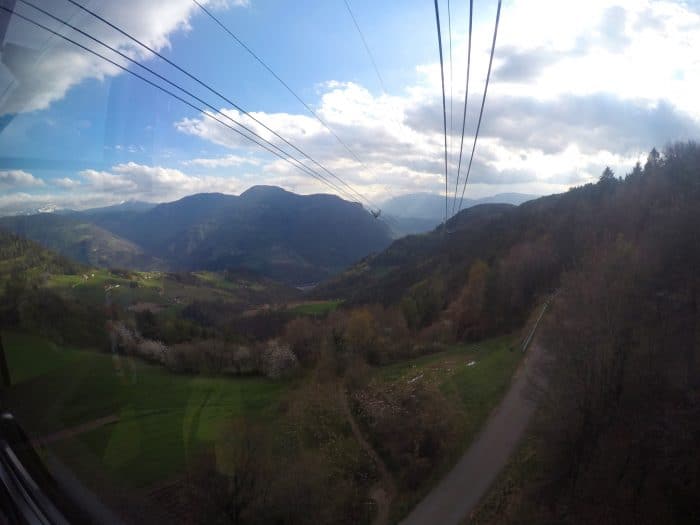 See more from our backpacking adventure

Excellent, I love Dolomites. Will need to go back to see places you described.

I love taking cable cars, so I’d be all over this! Plus, those views are just so amazing. Seems like a great way to spend an afternoon!

0
Reply
The Roaming Renegades
Reply to  Buddy The Traveling Monkey

Yeah cable cars are awesome aren’t they and it is a wonderful hike too.

This looks amazing although I always get a bit nervous on cable cars! This looks totally worth it though, great pics!

The cable car is quite high but the view will distract you from any nerves!!

awesome place to go up using cable car. The view from room is also nice! great post with photographs

Thanks! Yeah everywhere in this city there are amazing views, it’s a pretty amazing place and that cable car was one of the best things we have done!

I don’t know where you guys found the places for this trip but you keep introducing us all to new places we’ve never heard of. That cable car ride looks SCCAARRRYYYYY.

Ha ha, it was just by chance that we found out about these crazy things!! It was more like a rollercoaster at times but fun!! lol