For anyone who has visited the capital cities of the Baltics you can’t help but feel the similarities and yet their own personal uniqueness, and everyone will undoubtedly have their favourite! For us there was something about the chocolate box cobbled streets of Tallinn, the pastel shades punctuated by the ancient churches, the mixture of Eastern European and Scandinavian culture and of course, the remnants of communism that made this place so interesting!

The strangely named hill comes from the German Domberg, meaning cathedral Hill and is a a limestone hill in the centre of Tallinn standing around 30 metres higher than the rest of the city. The hill is also the centre of the government and parliament of Estonia and has historically been linked to the rulers of the country. Reflecting this also the fact that the parliament is actually situated within Toompea Castle which is topped by the Hermann tower, the flag that flies above here is a symbol of the government of Estonia. But what we loved the most about this area of the city was the amazing views down over the stunning old town below!

Reflecting the era when Estonia was part of the Russian Empire this typical Orthodox cathedral gives the old town a diverse vibe. Built in the Russian Revival style between 1894 and 1900 it is dedicated to Alexander Nevsky, as is the large cathedral in Sofia, who won the Battle of the ice in what is present day Estonia in 1242. As with all Orthodox churches it is lavishly decorated both inside and out and reflects the cultural position and influences of Estonia, technically part of Eastern Europe but heavily influenced by Russia in many ways but also Scandinavia and nearby Finland with regards language.

Visit the old city walls in the Virgin’s tower

Many of the ancient city walls of Tallinn still stand and are available in parts to explore, these which include the Virgin’s tower are amongst the most well preserved and offer the best views. Being a city that stands right on the Baltic sea, with many powerful nations such as Germany, Finland, Denmark and Russia surrounding it the city had to fortify itself from these threats. The medieval walls were first ordered to be built by Margaret Sambirian in 1265 and became known as “Margaret wall”. Having been extended and strengthened over the years much of what still stands today is from the 14th century and was a large reason for the old town to become a UNESCO world heritage site.

Take in the views from St Olaf’s church

Once again reflecting the Scandinavia cultural influences within Estonia the church was built in the 12th century for the community of those states and was dedicated to King Olaf II of Norway. The tower of the church is its most striking feature, ironically having been hit my lightening around 10 times causing the church to be burnt down on three occasions. Now standing at 417.7 ft tall it is rumoured that from 1549 to 1625 it was the tallest building in the world and is one of the reasons the KGB used the spire as a radio and surveillance point from 1944 to 1991. But it is that height that attracted us to climb the hundreds of tower to take in the spectacular view of the city and the Baltic Sea beyond.

Tallinn old town is a UNESCO listed wonder, a pastel coloured fairytale that trumps many of the other cobbled streets of the old towns of Europe we have strolled along. The stunning and unique town hall is the oldest in the Baltic region and Scandinavia having been built in the 13th century and it sits in the ancient town hall square, the centre of cultural life in Tallinn as well as a symbol of the city as an independent state as a major centre of the Hanseatic League. The old town itself dates from the 13th-16th centuries and has been left remarkably preserved despite wars, occupations and fires that have passed through. The old town really is one of the factors that made us fall in love with this stunning city!

Step back in time at the occupation museum

Like much of Eastern Europe Estonia has suffered from the occupations of the Nazi’s and The Soviet Union is short succession. After fighting for independence and freedom from several earlier occupations including Denmark, Germany and The Russian Empire the double and brutal occupations to come would shape the future of this county forever. Remembering the key events of these occupations, those who suffered the most as well as the cultural impact on Estonia is important for the people of not only this country but for every visitor to understand and never forget. A truly moving and well put together exhibition.

Head out to the graveyard of soviet monuments

A little off the beaten track this strange place is a reflection on how many ex-soviet block countries are unsure and conflicted on how to deal with this history. As the years since the union broke up pass and some of the anger dissipates the debate on how or whether to preserve this part of their history is even more open to opinion! As such the statues that used to once sit proudly around the city and the union are in a state of limbo. Torn down in angry riots once independence was once again gained it is a surprise they even survived to this day. But what to do with these historic items that represent an era of Estonian and European history that needs to be remembered just as much as any other. Located 5 miles outside of the city in the Pirita district, behind the Maarjamäe Palace (Estonian History Museum) this bizarre scrapyard of communist relics is a must for those interested in this culture. 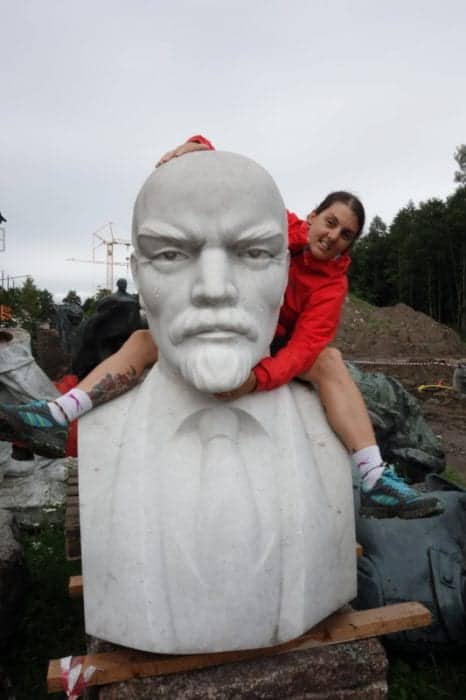 Have a day over in Helsinki

Tallinn is just across the Baltic sea from the Finnish capital of Helsinki, a wonderful and fascinating city to visit and a great opportunity to explore and other country during your time in Estonia. Ferries run often daily with 3 companies running several different services from 2hrs to 3hrs and costing around £50-£70 for a return trip. Helsinki is similar to Tallinn in many ways and you can clearly see how both countries share so much culture. The large Helsinki Cathedral and the historic Suomenlinna sea fortress are amongst our favourite things to see in the Finnish capital.

Post coming soon all about our day trip to Helsinki!

Have you ever been to the fairytale city of Tallinn?

We fell in love with this wonderful, beautiful and fascinating city after discovering all the cool things to do in Tallinn, what are your recommendations?