Chisinau Pronounced “kee-shee-now” is probably Europe’s least visited capital city, or at least the one most of us are likely to get wrong in the pub quiz! Not all that many people venture into the mysterious corner of the far east of Europe in which Moldova sits and even fewer know what there is to experience there! In all honesty Moldova isn’t a country that thrills the regular traveller looking for unforgettable beauty and amazement. But instead it provides a fascinating insight into an often over looked authentic culture and a world many of us never get to see.

Explore the markets of Chisinau

What better place is there to take in local life than the markets of any city. Centred around the city’s central bus station this chaotic and raucous set of markets feels rather disorganised and frantic. But that is the beauty of it, from bits of old tat to fresh fruit and veg there seems to be an inexplicable amount of random items for sale. 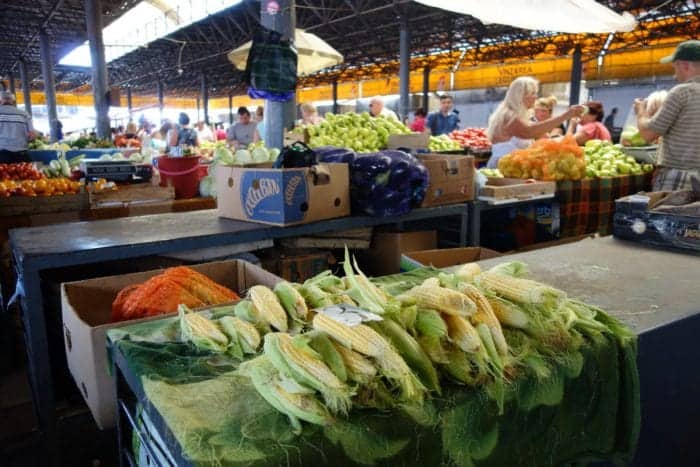 Many of these you have no idea what it is, where it came from or what its purpose is!! But immersing yourself in such a crazy and overwhelming environment is be best way to experience Chisinau in all its uniqueness…The flair of the Romanian influence and the staunch of the Ukrainian side. 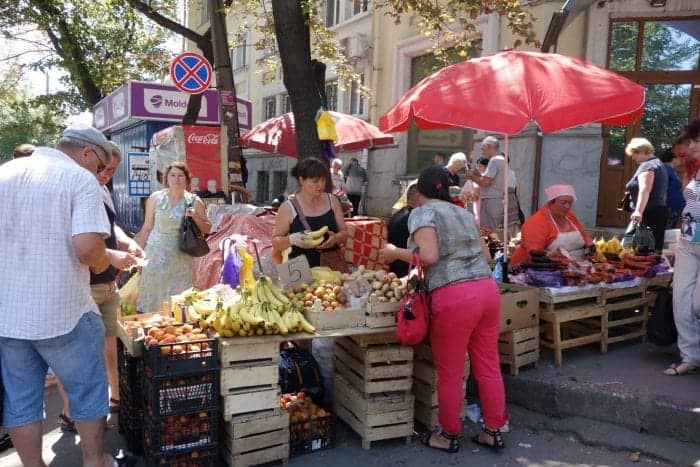 Find the beach in the city’s large park!

On our first day in the city we were jet lagged from our long over night bus trip from Brasov. The lack of sleep lead to us deliriously wandering around the city with no real aim or destination. Heading into the large park we felt a wander around this lovely wooded area would be a nice relaxing way to ease into Chisinau. 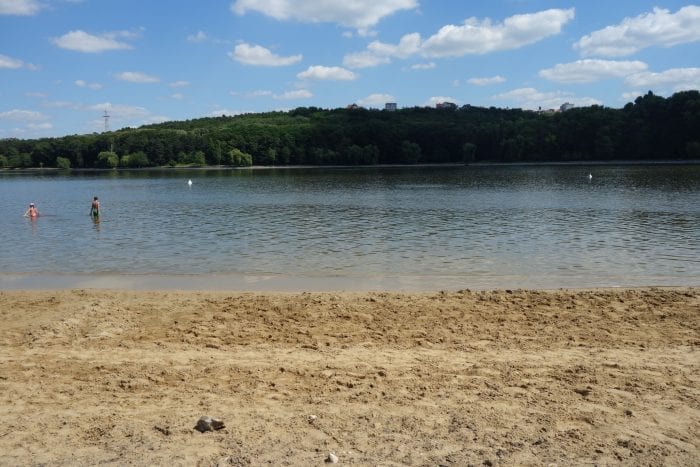 Soon we discovered Nistru beach, a soviet constructed resort built on the banks of the Nistru river where locals flock in the summer months in this land locked country. Now, I am not quite sure I would be tempted to slip into my bikini and take a dip in this murky water, but what interested me more what this slice of typical Moldovan life here that for us seems so surreal! 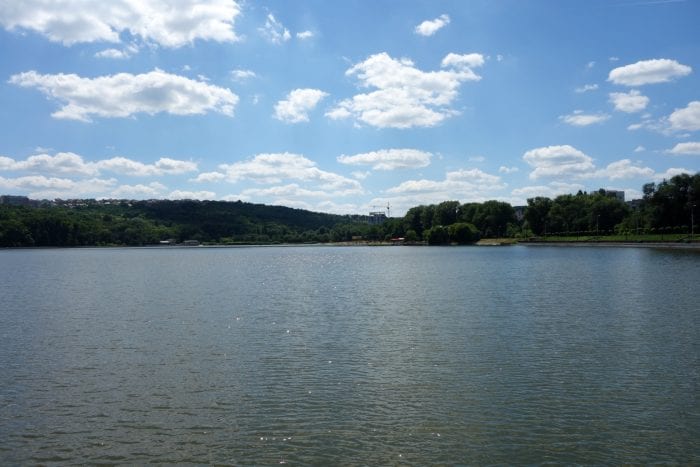 Built in 1840 to commemorate Russia’s victory over the Ottoman empire this triumphal arch tells the history of this country that has fought on numerous occasions for independence. Having been part of the Russian Empire, The Ottoman Empire, Romania and The USSR Moldova has seen many influences and battles. The fact that his arch now sits opposite the independent government of Moldova and within flies proudly the Moldovan flag shows the story of this small and yet wildly fought over nation. 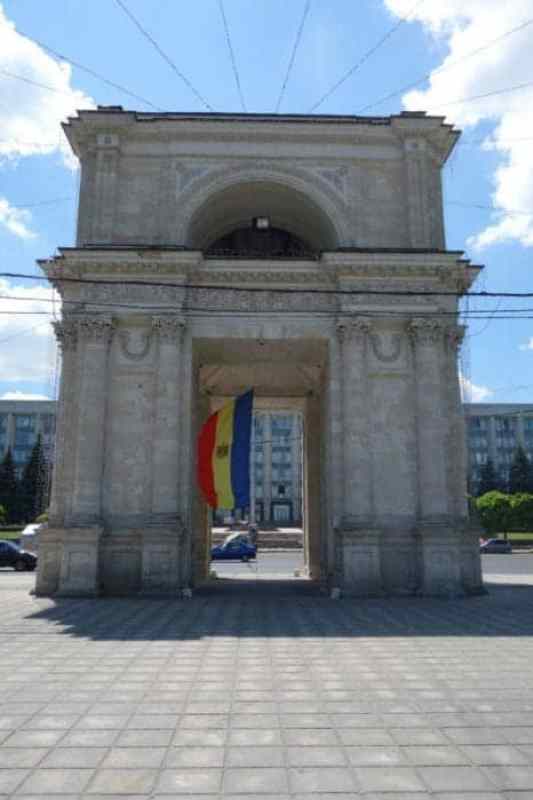 This huge white cathedral sits opposite the Triumphal Arch and has a grand and imposing feel to it and dominates the park in which is was constructed. Built in the Neo-Classical style in the 1830’s it once again has been through many changes with the differing eras of Moldova. Built originally by the governor of New Russia it was then heavily bombed during the second world war. 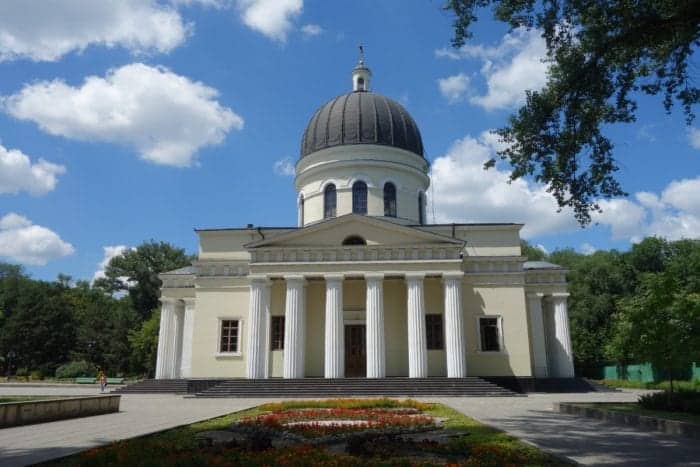 Left is a sorry state the once bright and colourful interior was repainted plain white and the bell tower destroyed during the communist era. Lovingly repaired in 1997 by the high population of Eastern Orthodox followers in Moldova the cathedral is now back to its former glory both externally and internally. A symbol of more than just religion but also the resilience of the Moldovan people. 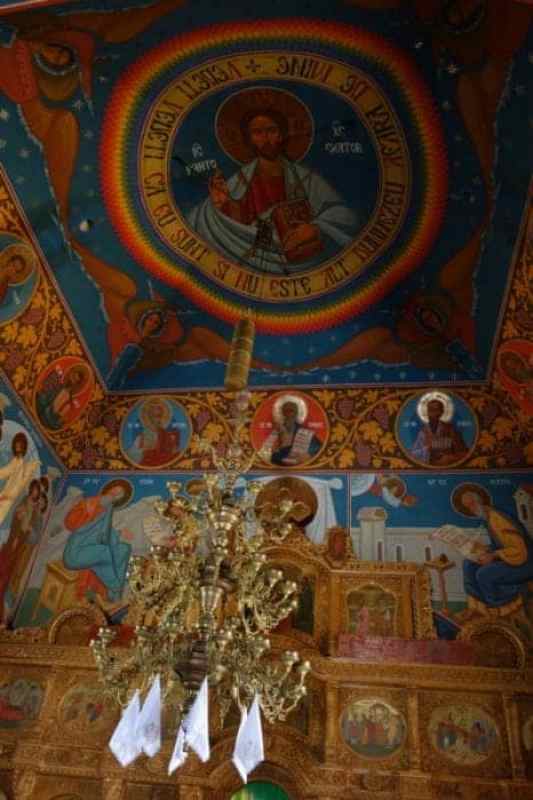 The impressive Military Museum of Chisinau

A rather strange and at first glance shabby museum in a grand old building the various exhibitions display artefacts from wars known and those very much off the mainstream radar. The outdoor area is free and covers an extensive collection of impressive military transport including many tanks, aeroplanes and trucks, most of which were inherited from Russia. 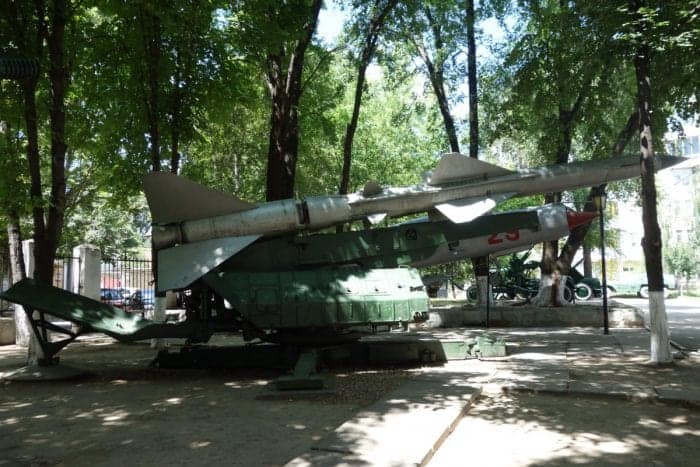 However the dark and imposing corridors of the internal section of museum take you on a journey through the various occupations and wars Moldova has been involved in. For us the most interesting have to be that against Transnistria, a conflict that has largely gone under the radar of the outside world but one which is still very much on the edge still within this region. 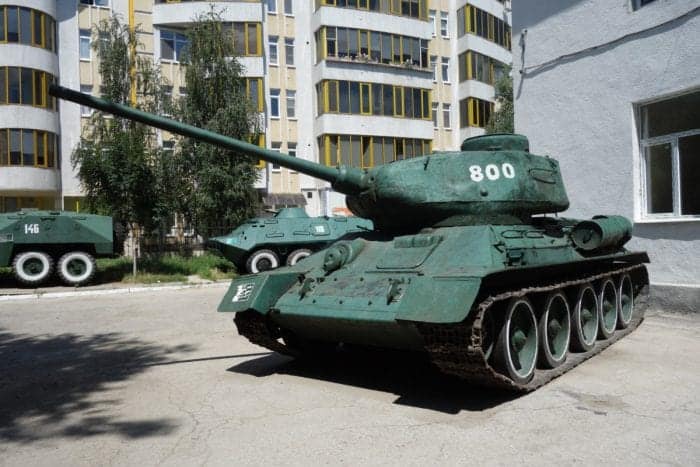 This stunning shimmering bright blue and gold convent tucked away against the grey background of post soviet Chisinau feels like walking into a fairytale. Hidden behind a high fence of trees from a distance only the tips of the onion domes shining in the sun give away this beautiful convent. One of the oldest buildings in the capital it almost feels out of place, but in truth the city has grown around it whilst is has stayed in against the odds. 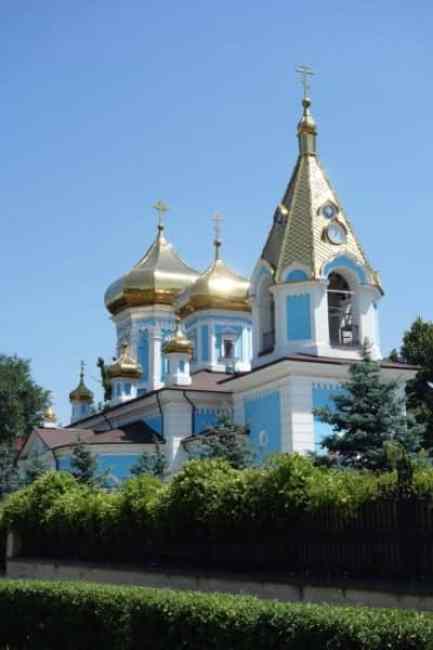 Head out of the city to the Orheiul Vechi monastery

Not actually in the capital itself but a couple of hours away it is easily visitable in a day from Chisinau and is often considered to be one of the only real “attractions” of Moldova that most may have heard of. Situated in the Moldovan countryside next to a tiny traditional village this old Monastery is composed of ancient archeological sites and churches that are still in use to this day. 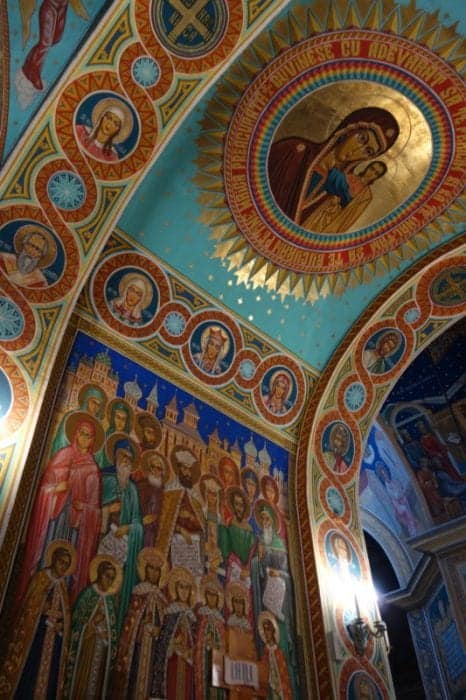 Surrounded by the stunning hillside on which it is based the stunning church that stands out shimmering against the green landscape is decorated in sumptuous colour and detail and is still frequented by monks. But located in this historical open air complex is many significant artefacts from the Iron Age, Eneolithic and Paleolithic eras as well as remnants of ancient fortresses, monasteries, caves and towns some as early as the 6th century BC and many from between the 16th-18th centuries. 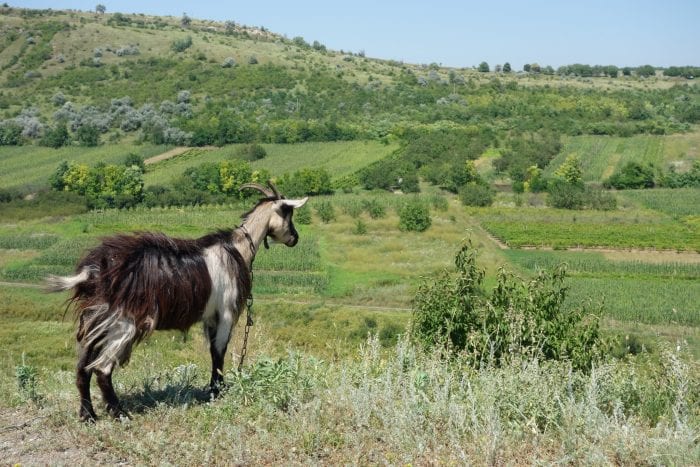 Head over to the communist republic of Transnistria

Is it part of Moldova or isn’t it, this strange nation which declared independence from Moldova in the early 90’s has been in limbo ever since. With only Russia and a handful of other self declared republics acknowledging its independence it has its own money, government and culture. Heading over into Transnistria is like going back in time to the height of the soviet union. Here hammer and sickles are common sight and Lenin statues still plentiful, its quite the experience! 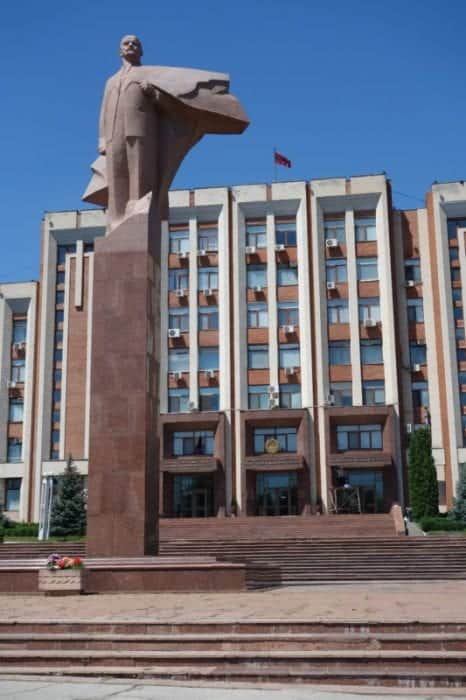 Crossing the border is a strange affair with the Russian army having a presence here since the war over this territory. Visitors are issues a 12 hour visa that can be extended once inside the territory. Most visits today are without issue but overstay your time and you might find yourself having to bribe one of the guards…that is if you even recognise their authority!

Read more here: A day in the communist republic of Transnistria 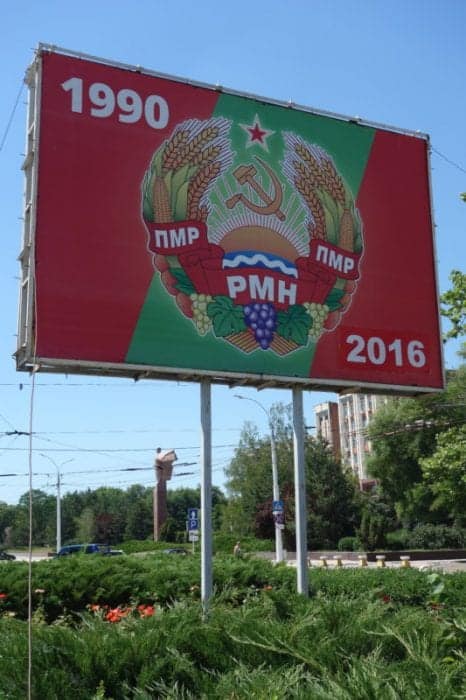 Lets be honest, Chisinau isn’t a tourists paradise, but the for the traveller is has much to offer those who seek out the fascination in the everyday lives of people from other countries and cultures. Just wandering around Chisinau and the villages that surround it is the best way to soak in the unique culture of Moldova. Get talking to locals, each Moldovan food and drink their homemade wine and beer. You will soon find that there is plenty more to this forgotten corner of Europe than you first imagined! 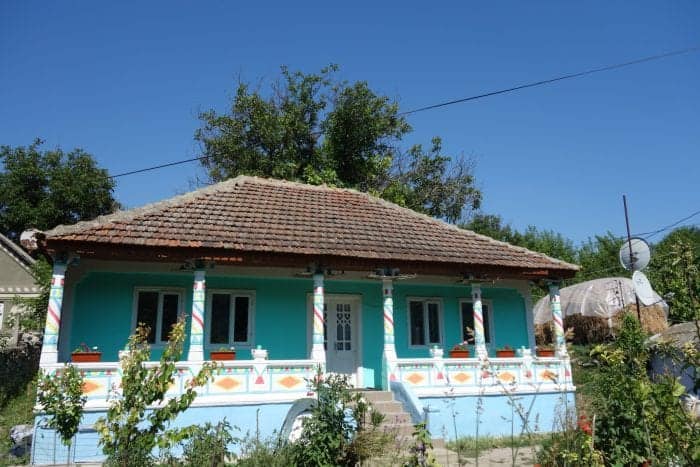 Read more about being one of the only tourists in Moldova: The most off the beaten track country in Europe?

Have you ever been to Moldova?

Thank for the artical, i’m going to Chisinau soon, hope it will be as sunny as when you were there. But it probably wil not be, because it will b in April.

No worries! Have a great time over there it’s a really unique place. You never know you might get decent weather, it’s got more of a Mediterranean climate so it’s usually better weather in April than quite a few places in Western Europe.

This is so useful! Thank you.

I love visiting places where most tourists don’t go. I would love to visit Moldova one day and your post gives me a place to start on the things to see 🙂

It is a really rewarding place to visit, mostly because not many other tourists venture that far. It is a shame many stop at Romania and never continue one!