You probably know by now that we have this weird obsession with abandoned places and also generally dodgy locations within nice cities, we just have some sort of tentus-wish I guess! So after managing to see some quite amazing places in Eastern Europe, getting our Urban Exploration on and seeing some of the most strange, surreal and off the beaten track locations as a result, we wanted this to continue in Asia! We had heard rumours of the Bangkok Airplane graveyard, guarded by a family who had taken the place over. It seemed to fascinating, creepy and sinister to turn down! We hopped on the canal boat for a sea sick inducing journey to check this place out for ourselves!

I had seen a few photos around of this so called Bangkok Airplane graveyard and many said it was a little out of the way and hard to reach, often closed or even rumoured to have been dismantled. But the temptation of running around a derelict jumbo jet was just too much to say no too. 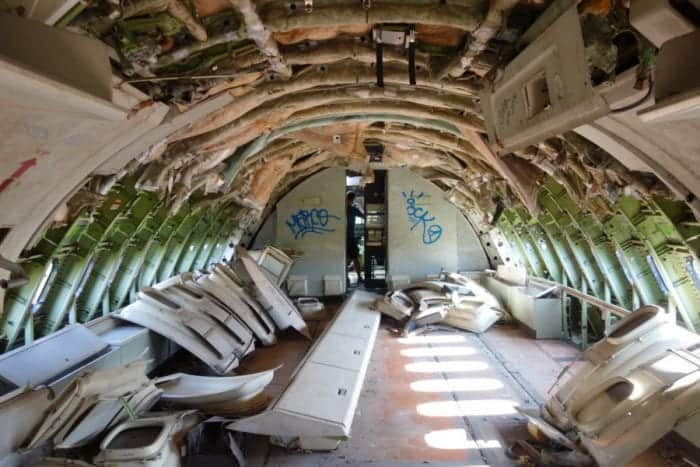 I mean, we’ve ticked off some major Urbex sites this year and covered all of the major abandoned places you want to explore: Chernobyl, Hospital, school, Swimming pool, Bobsleigh track, fairground… communist head quarters!! So what next, not many people would have Airplane graveyard on that list, I mean, how many of them are there! So theBangkok Airplane graveyard would be a completely new Urban Exploration experience! 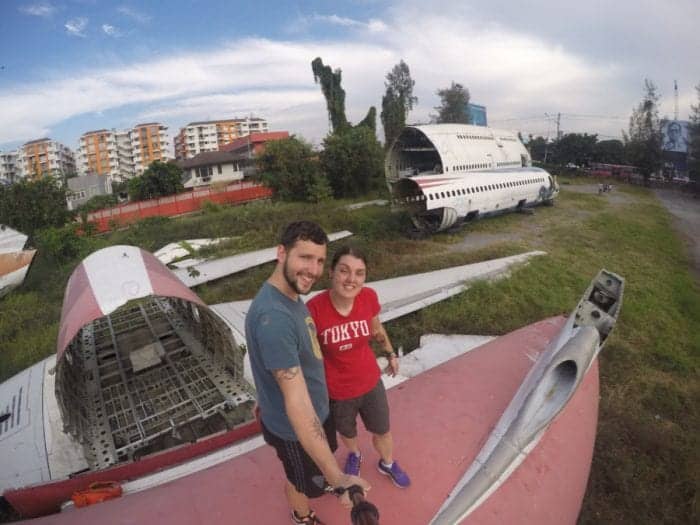 Clambering into this surreal spot, yet another Urbex abroad!

Finding the Bangkok Airplane graveyard was actually much easier than we expected, we have more instructions below, but it was once we got off the boat that the strangeness began. Hopping off probably one stop too soon we realised that this area of Bangkok was much more run down that the one we had sped away from along the pungent canal waters that we were walking along! 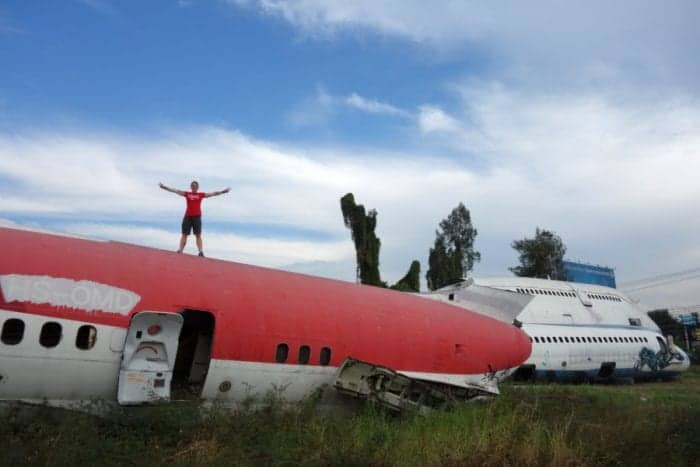 Here the familiar stares we had received in China began again, people lived in makeshift housing underneath the underpasses we traversed around and packs of wild dogs seemed to be patrolling the area. 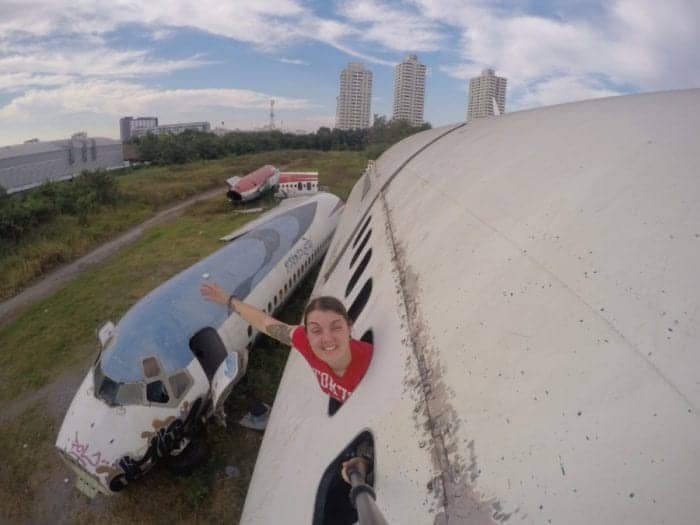 In the distance from the canal we spotted the large hull of one of the planes, shimmering in the intense afternoon sun it stood out amongst the sea of high rise flats that surrounded this most random of abandoned lots. Here the familiar stench of filth and decay filled our lungs, a smell so rancid and yet so associated with adventure for us! We crossed through a small wooded area, our legs scratched from the bushes and along a dirt track as a scrap head truck, clearly handmade, chugged passed with around 5 topless men clinging to the edges. Here was the Bangkok Airplane graveyard! 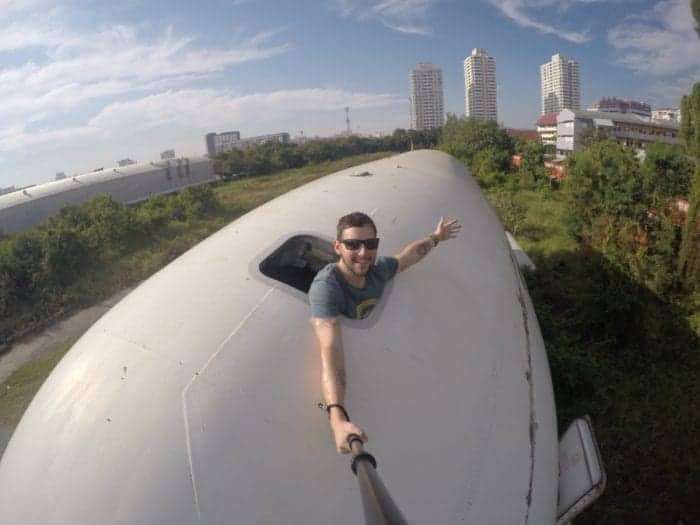 No sooner had we stepped off the track and towards the planes we were approached by a short and haggard looking woman with no teeth or shoes and only ripped up clothing to cover her tanned and craggy skin. Two hundred she shouted at us whilst tapping on a pile of notes she pulled from her ragged trousers! We obliged and were swiftly left along, well apart from the wandering dogs and cockerels! 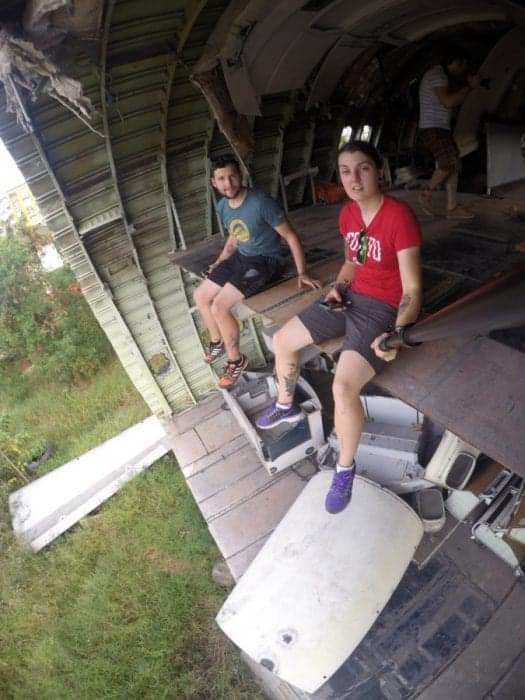 Exploring these eerie relics that resembled a crash site!

That was simple enough we thought. We had heard many people getting kicked out, being told the area was closed or being asked to pay twice or even three times the amount we did. Despite the “Hills have eyes” looking nature of the gypsy family and the rumours we had head of violence and uncooperative it was easy and painless to gain the freedom of the whole Bangkok Airplane graveyard! 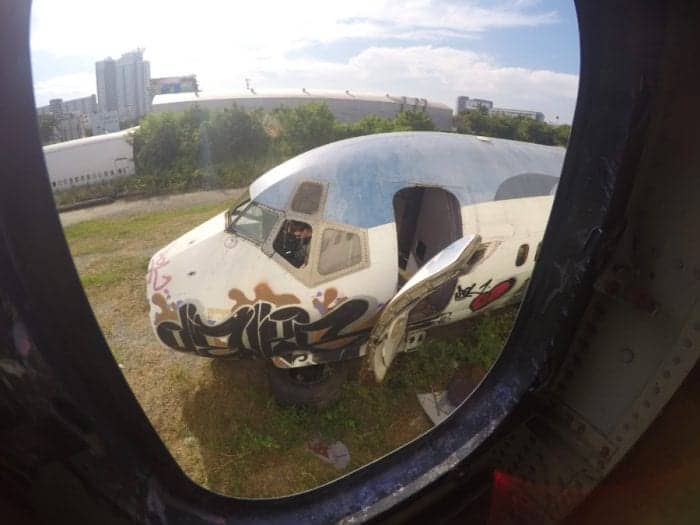 We were literally just left to do our own thing on the site, we climbed on top of two of the planes, inside the hull of each one and took a whole host of ridiculous selfies whilst teetering in unsafe positions. As explorers we were all over this place, zooming in on the details of these crafts that were so familiar to us and yet in such a scary condition. No one seems to be able to give a definitive answer as to how they got here, one story we heard that seems to be the most believable is that an investor bought them and placed them here to make a bar/ venue out of them. Apparently he ran out of money after shipping them here and having them cut up, so now the site is left in a very strange limbo! 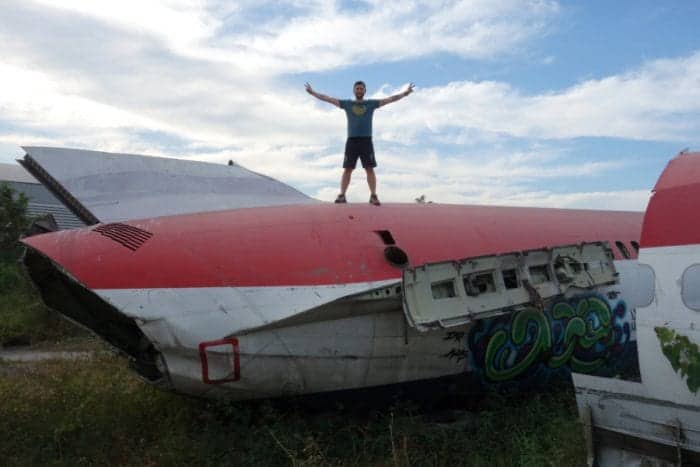 As travellers stepping inside a plane is a regular part of life, but how many of us consider what happens to them once they are decommissioned? Seeing these planes cut in half, their insides ripped out and strewn down the length of the hull and spilling out on to the ground was quite dramatic and in fact scary. With piles of old clothing, burnt children’s toys and rubbish also covering the area it was hard not to look at this place like a crash site, eerily playing up to all my fears of air travel and yet it was the perfect place to explore. The Bangkok Airplane graveyard was living up to the bill! 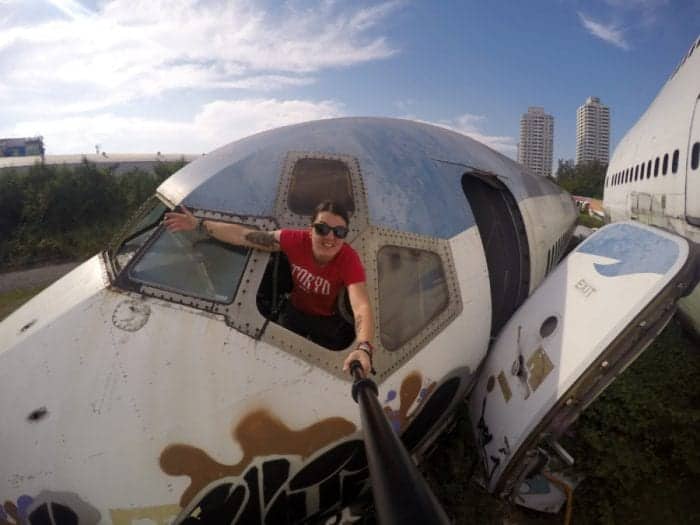 Dodging the hanging emergency oxygen masks and peering out of the cracked windows the spookiness of the site continues, emergency exits wide open and the cockpit left in disarray. We sat there, where pilots would have done for hundred of hours, considering how strange and surreal it was to be in the cockpit of a jumbo jet!! 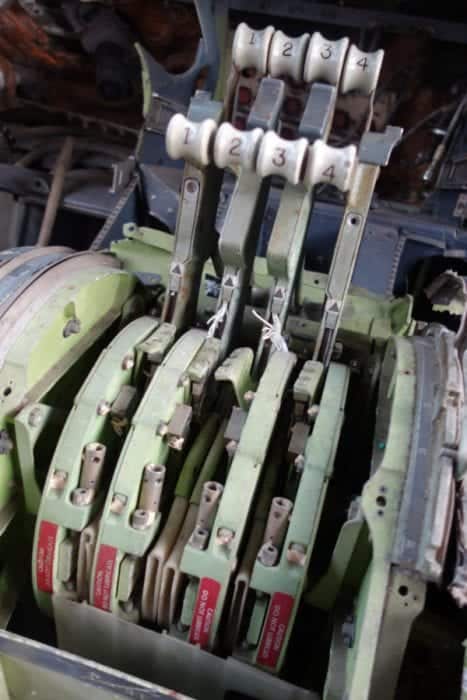 Something that would never be allowed post 9/11! We even clambered on top of the seats to stick out heads out of the hatch in the roof, looking out we could tell how huge this beast was by just how high we felt on the ground!! To think of all the amazing places these birds must have flown to, the stories they have carried millions of miles, to be sat here to rot at the Bangkok Airplane graveyard! 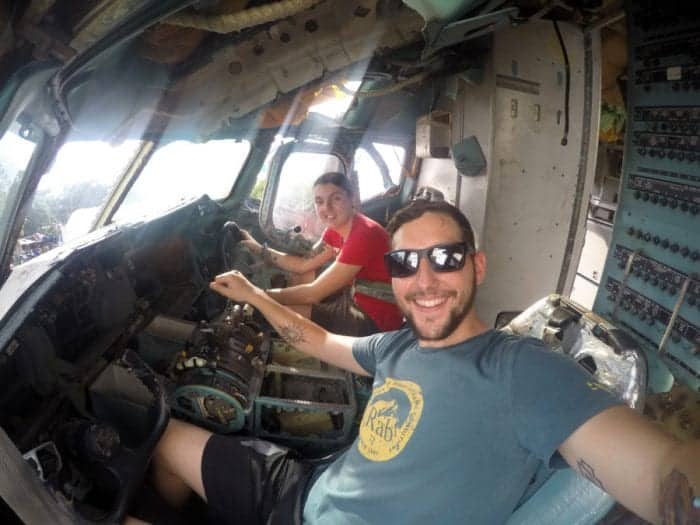 As we explored the entire area of the site the children of the people who lived in one of the converted planes came out. Shouting and screaming as they kicked a brown and bald ball around the base of the plane we were in. Initially I was over come with the realisation that for these children this might be the closest they ever come to stepping inside an aircraft. 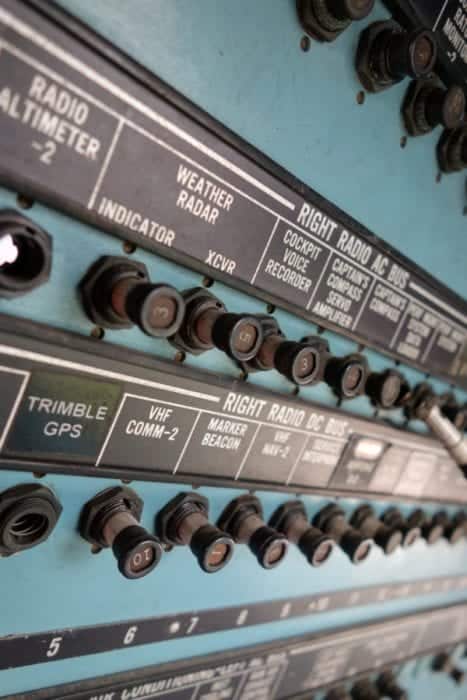 For us to see them in this state is shocking and fascinating, but surely growing up here to eventually see a fully functioning plane, hearing the roar of the engines and the lift as you take off would be even more mind blowing. Its these moment in which you realise how lucky we are to travel the world and how ironic that these poor people are living trapped inside the very things that provide the vehicle for our freedom and exploration… then they began shouting money up at us! 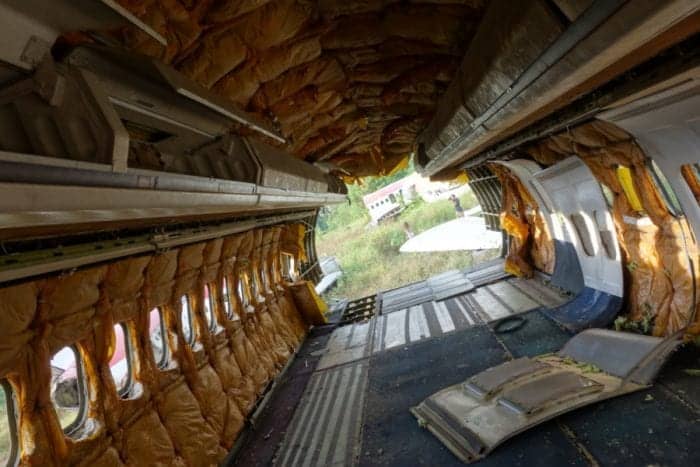 A strange turn of events as we head for the exit: A 7 year old turns gangsta!

The shouts of “money, money” got louder as we looked out of the plane window at the kids now pointing up at us. We shouted back that we had already paid as their mother stood a few hundred feet away, arms folded and lent against her wooden hut. But they continued and now began pointing to imaginary watches and saying “time, give me money rich man!”. We had been here almost 2 hours so I guess this is all that 200 Baht buys you to explore, at almost 4.30pm we thought maybe it was then time to be leaving as their pitch became ever more strained. 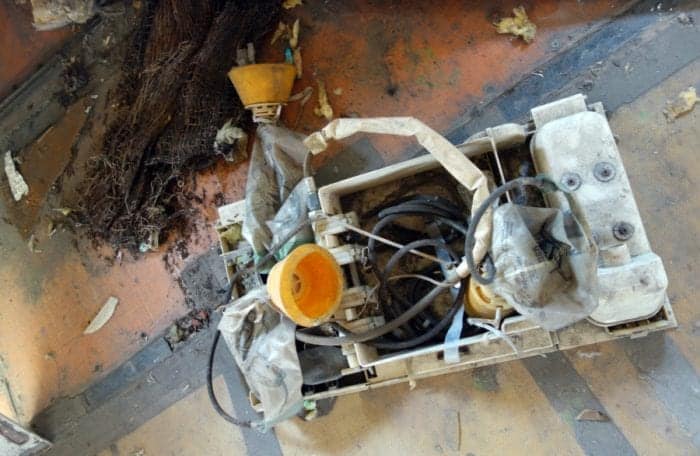 Following us as we gingerly made our way to the exit more children surrounded us shouting MONEY! shorty in all his wisdom was beginning to get annoyed now, after all we had paid what they asked and they were only kids, so he shouted back police! 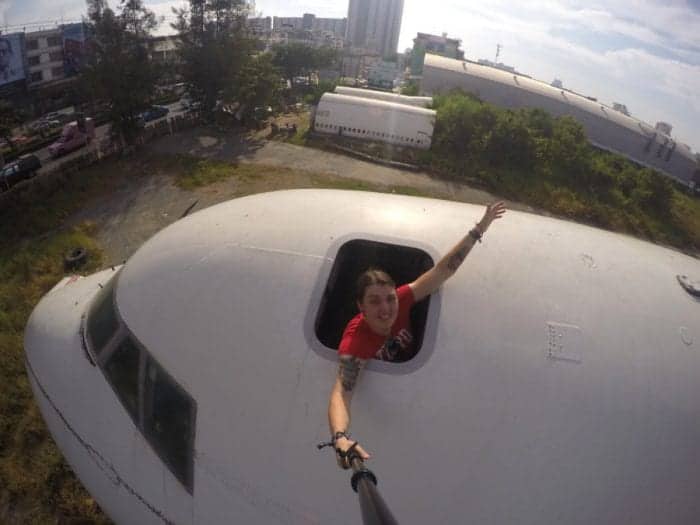 That’s when they all ran and we thought the debacle was over, but instead things took a sinister twist. One of the boys walked over with purpose, his mother closely behind. He once again tapped his arm as to indicate a clock and said “time to leave”. He then pulled out a syringe from his pocket and took the cap off, tapping it to show us it was full of some murky liquid!! 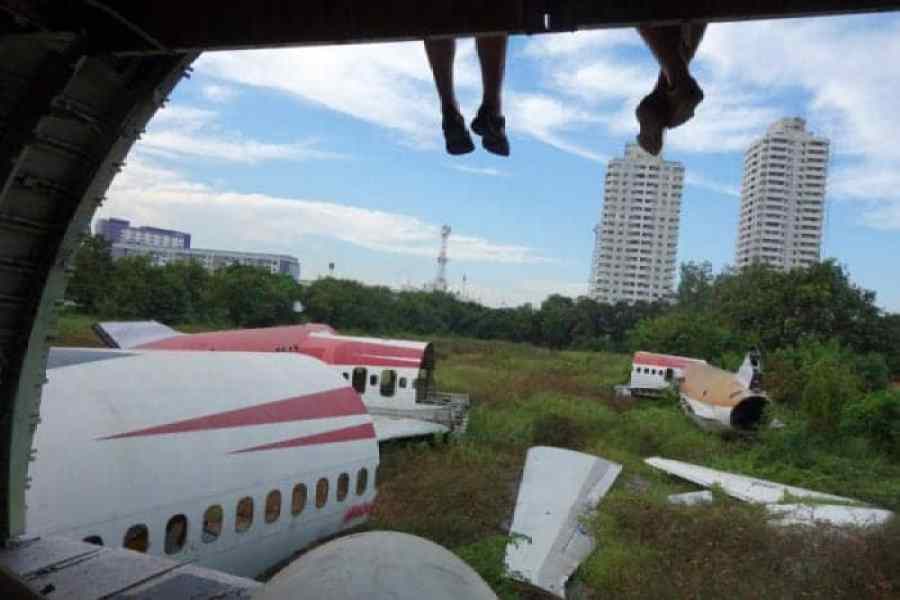 Who knows what was inside, but clearly they use this to enforce their rule on this place and we weren’t keen to hang around and find out. Thankfully he didn’t try anything and we left with haste, thoughts racing through our minds of the trouble that needle could have gotten us in! Despite this however we did have an amazing day at the Bangkok Airplane graveyard! 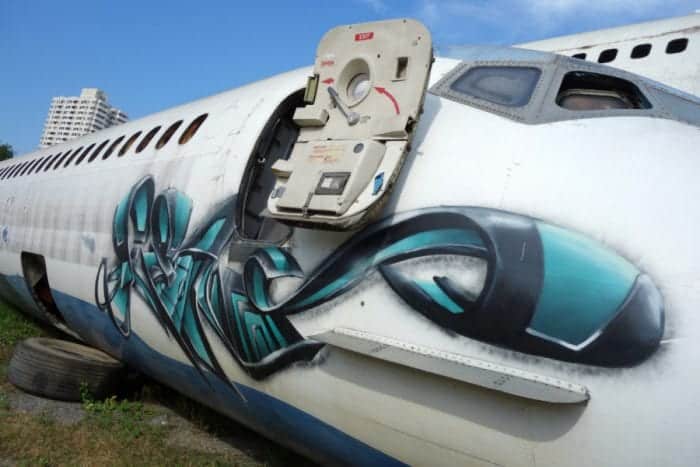 How to get to theBangkok Airplane graveyard, how much it cost and advice!

If you still fancy going then its quite simple. Take the canal ferry all the way to the last stop at Bangkapi or Wat Sri Bunruang Pier. From here just walk down the canal a little until you see an opening and a large abandoned lot. If you are on Map.me, which we highly recommend, it is listed on there!

We paid 200 TB each to enter, some we’ve heard got charged 300 or even more, others were refused. You can try to barter with them but given our experience I would either accept whatever charge they come up with or leave!

General advice would be to wear proper shoes as it isn’t really suitable for flip flops and be careful around the kids here! 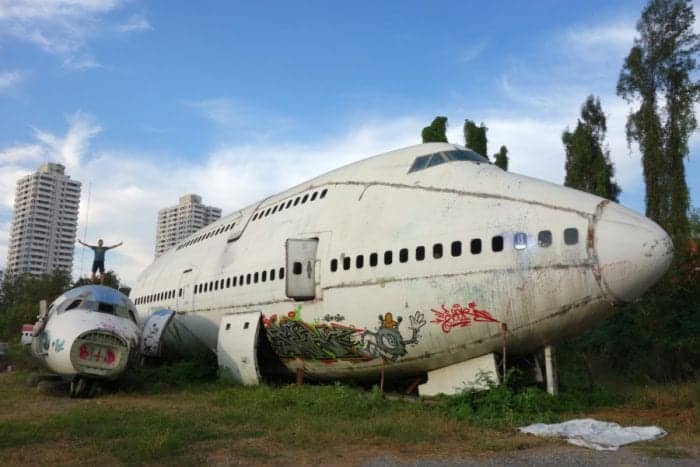 Have you ever been to this crazy place, do you have any stories?