Of all the countries in Southeast Asia little old Brunei must be the least visited. Despite seeing far fewer tourists in Myanmar than in places like Thailand we didn’t even spot a single on in this oil rich Kingdom. It’s remote location on two small strips of land on Borneo, its awkward transport links and reputation for being overly strict lead to it being missed out my many was they travel through this region. But for us that was one of the selling points! Spending 8 hours on two ferries crossing over from Kota Kinabalu in Malaysia we were keen to step foot in this mysterious land many others didn’t. What we found was a fascinating culture and a unique country with a much more modern outlook than many might imagine! Here’s our things to do in Brunei guide!

The undoubted landmark of the city, the Omar Ali Saifuddien Mosque, built in 1958 the 171 ft golden dome is an icon of this small country. Of course, being Brunei the Mosque is a lavish affair with marble floors, handcrafted carpets from Saudi Arabia, chandeliers from back home in England and of course that dome, made from 3.5million mosaic pieces of glass and covered in real gold leaf. 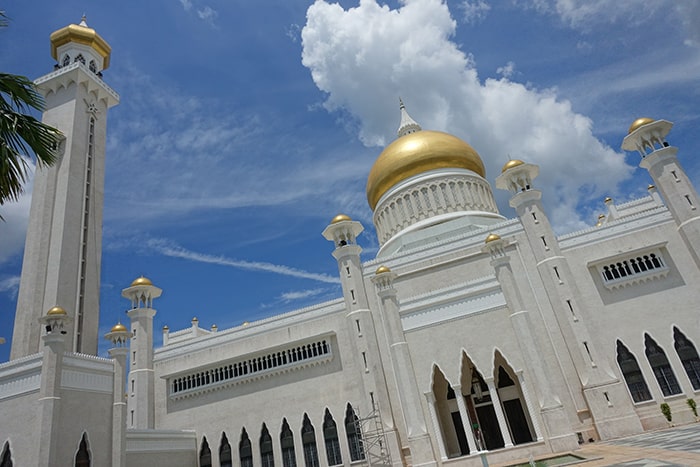 It really is a sight to be seen! Named after the current Sultan’s late father and surrounded by an artificial reflecting pool if there is one thing to see here it is this! Non muslims are allowed inside when prayers are not in session and robes/ head scarves are provided free of charge. There in no photography allowed inside so you’ll just have to come and visit for yourself! This is a real must do on our things to do in Brunei guide! 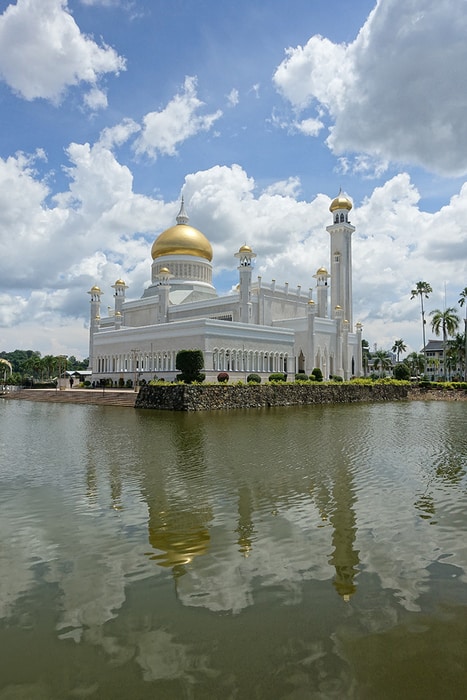 The Brunei river for which the country is named runs right through the centre of BSB and is historically the lifeline of this town. Local life revolves around the river, from settlements literally on the river to a now developed modern walkway along its edge that provides great views of the area. From either side the view is vastly different, from one of opulence and modernity to one of a traditional life not changed for centuries. On a hot day in BSB there is nowhere better to sit back and watch the world of Brunei go by! Such a simple but wonderful experience on our things to do in Brunei list. 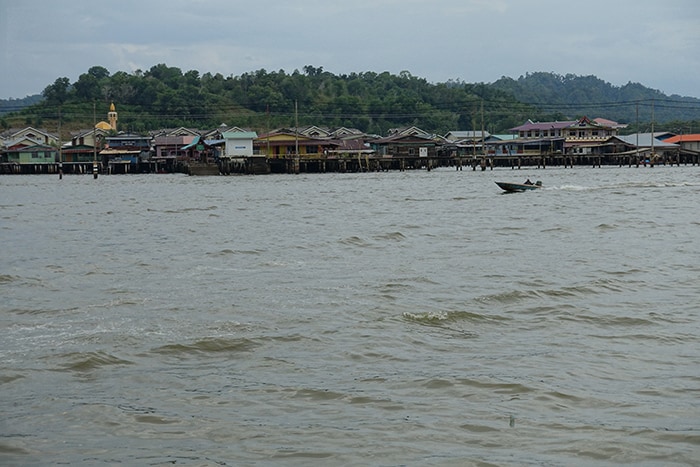 Jump on a bumpy water taxi and travel the local way

But if you don’t just fancy watching the world go by, but want to head right in and experience the Brunei river then you just have to take a water taxi. For only B$1 you can cross the river or head up and down to some of the other spots along its edge. The river taxis are actually very cheap and very common, you should have no problem flagging one down! However be warned, these guys like to give it some throttle along the busy waterway and combined with the wakes from other boats and the tiny wooden seats you are in for a rough but unforgettable ride!! You’ve not really experienced the county till you’ve ticked this off the things to do in Brunei list!! 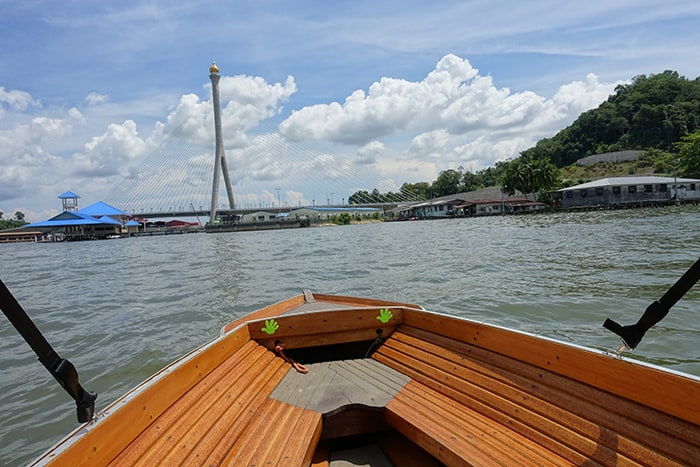 Just on the other side of the river to the modern capital is the floating village of Kampong Ayer, the largest in the world. Dating back over 1300 years the local people of BSB have always lived on the river and life continues much in the same way today. You can cross over for only B$1 and explore the walkways yourself or take a local boat guide for around B$25. Here you will see just how local life works on this huge maze like construction that is a lot more developed that you might imagine. 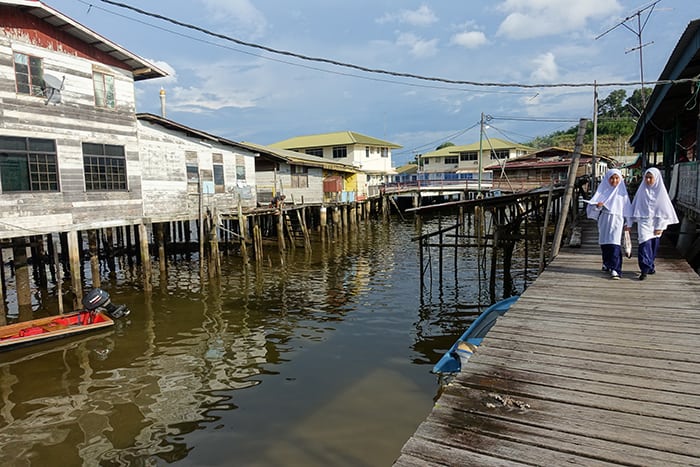 Some areas are new concrete structures with nice boats parked below, electricity, plumbing, police station, shops, a fire station and several mosques and schools! Other areas are a little more rundown with many aged wooden buildings looking on the verge of collapse. But with an estimated 39,000 people living here it is little wonder there is so much going on! The “Venice of the east” is a delight to explore and a real insight, one of our favourite things to do in Brunei. 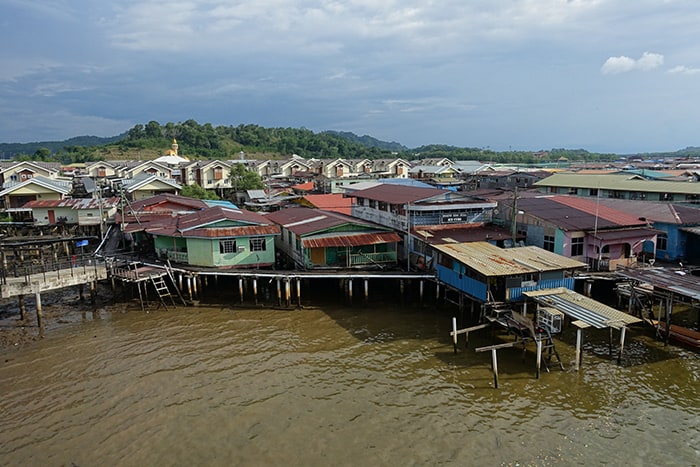 Just a little out of the city centre is another of BSB’s wonderful mosques to visit. Built in 1994 its huge minarets tower over the Kiarong district in which it sits. One of the most impressive examples of modern Islamic architecture with 29 golden domes and 190 ft ornamental minarets. It is Brunei’s largest mosque allowing up to 4,500 worshipers at one time and as such is a landmark of the country. Such a stunning place to visit on our things to do in Brunei guide.

There is no better place to immerse yourself in local culture than at the markets. Whether you plan on bartering hard for a bargain against these hardened sellers or just want a more relaxing wander through the chaotic stalls its always fun. The Tami Kianggeh markets are a lively affair with pretty much anything you could think of on offer, from cooked food to fresh vegetables, fruit and still squirming fish alongside handmade goods and wears. Sitting on the banks of the Kianggeh river, with locals leaving and arriving often by boat, you are sure to see what real life in Brunei is all about here! 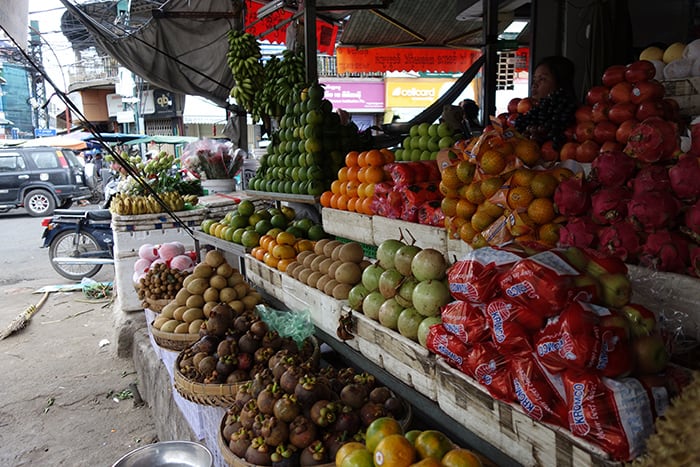 Explore the unique culture of this tiny, but hugely rich country on Borneo

Brunei is an interesting and fascinating place to visit. The culture here is very different to many other nations in Southeast Asia and it is one of the most strict in terms of religion. With Arabic writing and an overwhelmingly devout Muslim population we often felt more like we were in the Middle East than in South East Asia. Of course, neighbouring Malaysia is Muslim too but the Chinese influence means it does feel much more diverse. 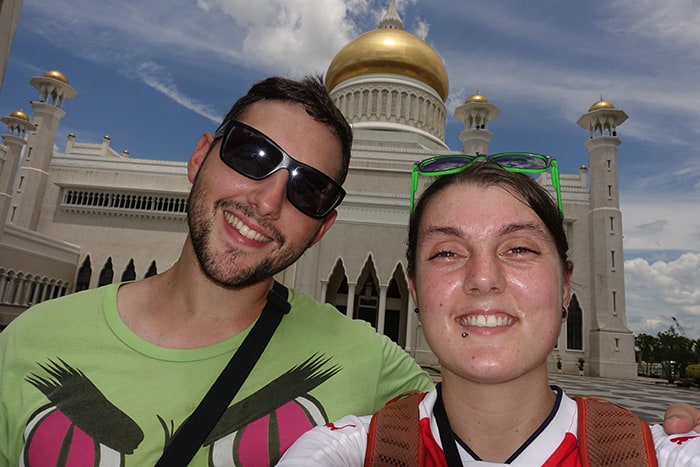 However Brunei is much more modern than we expected and especially the city centre where there is a lot of development including malls and new buildings. There is also a stark contrast here between those who have money and those who don’t, with its reputation as a rich nation you can definitely see that on show, however most local people live over on the water village. It might be a little stricter than many of the neighbouring countries when it comes to religion, but it is still a lot more open minded than you might expect. I only had to cover up when I went inside mosques and everyone was very welcoming and inquisitive, border control was just the same as anywhere else too… you just have to remember that the country is dry! 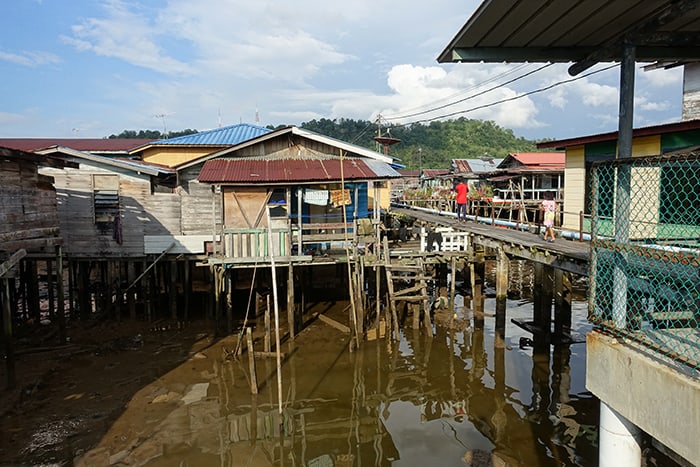 Also, an interesting fact is that Singapore Dollars and Brunei dollars are interchangeable, meaning they are both worth the same and can be spent in both countries. Don’t be surprised if your change is a mixture of both! 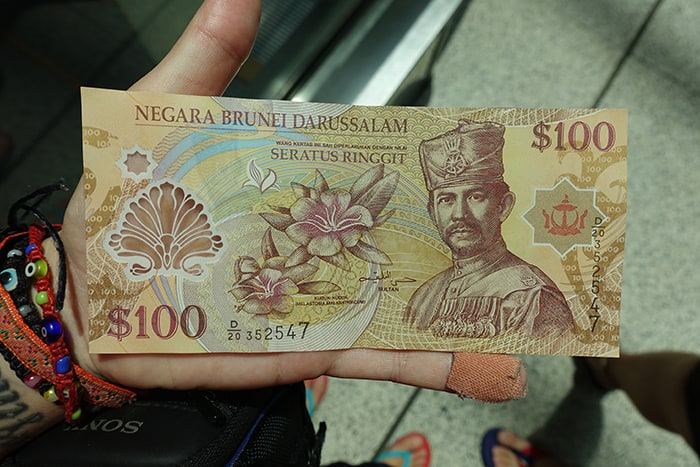 How to get to Brunei? Take the 8 hour ferry from Kota Kinabalu in Malaysia!

Brunei can be a little difficult to get to but it’s also quite the adventure. There are long bus rides available from several areas of Malaysian Borneo the with closes and most workable being Miri. It is possible to get a bus from both Kuching and Kota Kinabalu but be prepared for at least 15 hours worth of a ride! 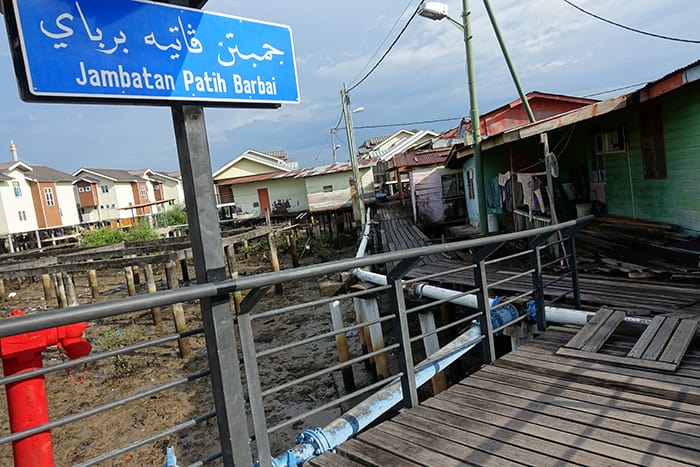 There is also the option of flying into the countries airport, however flights are usually pretty expensive as it is not all that popular a destinations!

The best way we found was to take the ferry from Kota Kinabalu. This involves taking two ferries and takes around 8 hours, but is quite an adventure and not all to expensive either. We wrote in more detail here:  How to get to Brunei from KK! 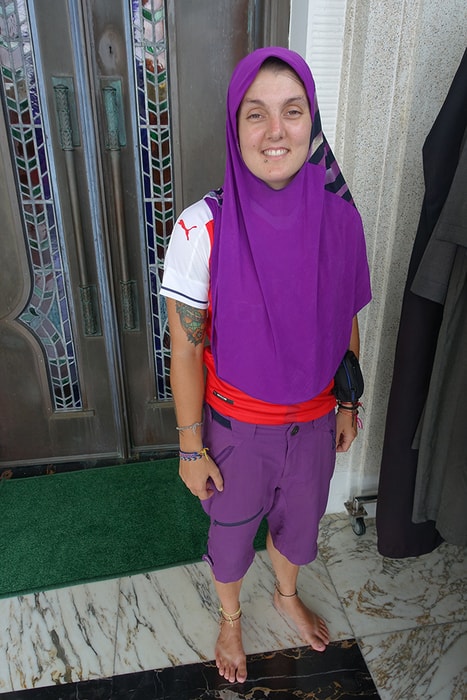 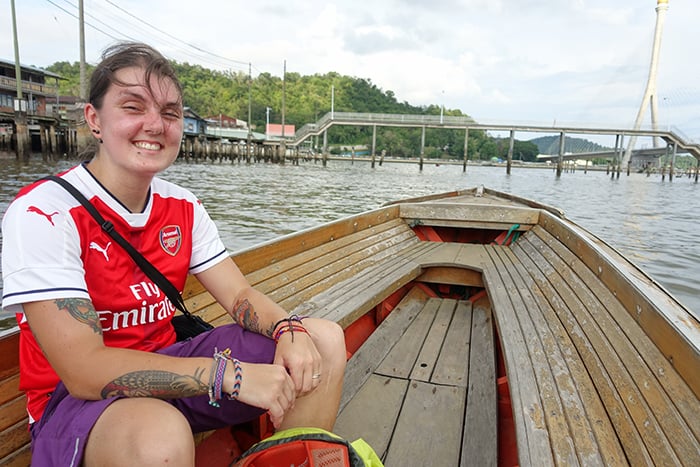 Book your transport across Borneo and Asia here: 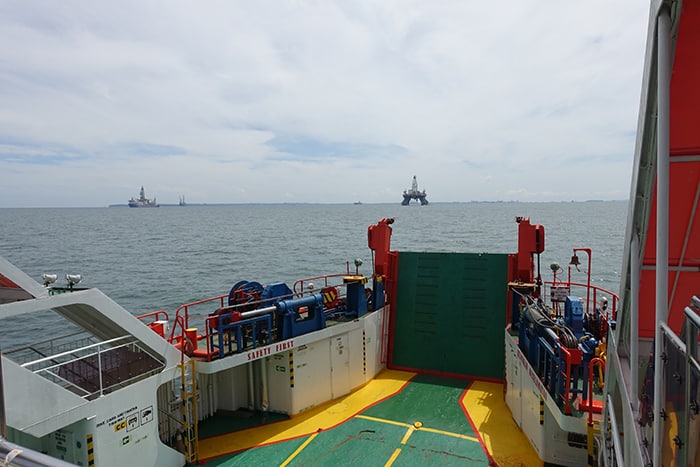 Book your transport across Borneo and Asia here:

Have you ever been to Brunei, what are your things to do in Brunei?

The Kampung Ayer floating village looks really interesting and impressive considering all the public facilities built there too!