After a month backpacking around China there were many things we missed about being back home, of course, we were on the adventure of a lifetime, but nothing quite beats heading out at the weekend to clamber around on some rocks… well, if you are us anyway! We made sure to pack our climbing boots as we headed off travelling this time and once in the southern region of China made a beeline for the Yangshuo mountains. Despite getting a rude awakening to a style of climbing as foreign to us as the country we had called home for a month we had the most amazing time pulling a harness back on and swinging on a single rope hundreds of feet above the floor, whoever you are, Yangshou rock climbing is not to be missed! Getting back on the rock after a month backpacking around China

As we headed to Yangshuo the clock ticked over on a month in the crazy land that is China, a month of culture shocks, adventure, bucket lists items ticked and unforgettable memories…but no climbing! Of course, we were missing home, the availability of cheese and our pug mainly, but climbing is such a big part of our lives back home and despite loving life on the road it is hard to keep up this hobby. So when we discovered the availability and accessibility of Yangshuo rock climbing we made this a priority during our time here and the Yangshuo mountains looked like the most perfect place! 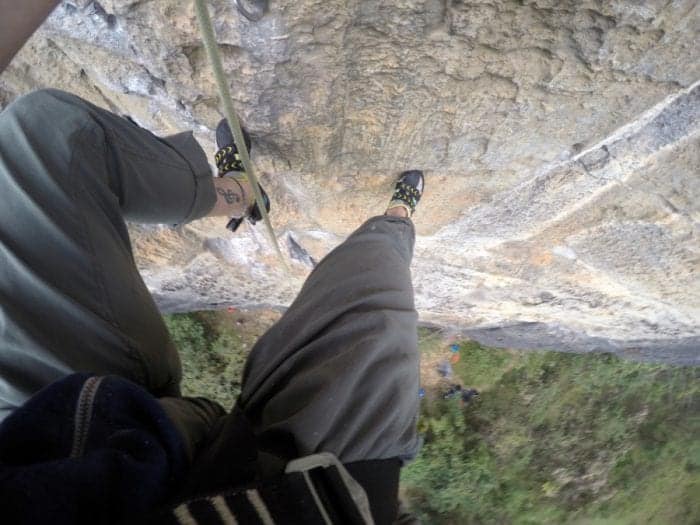 A rude awakening on the tough and tall limestone crags of Asia and the Yangshuo mountains!

Yangshuo rock climbing is very different to that we are used to at home, the gritstone of the northwest of England that offers us traditional climbing up cracks and bouldering on rounded edges is nothing like these limestone crags. Sharp edges and features were like nothing we had ever climbed before, literally and figuratively like traversing an alien landscape in the midst of the other worldly Yangshuo mountains! 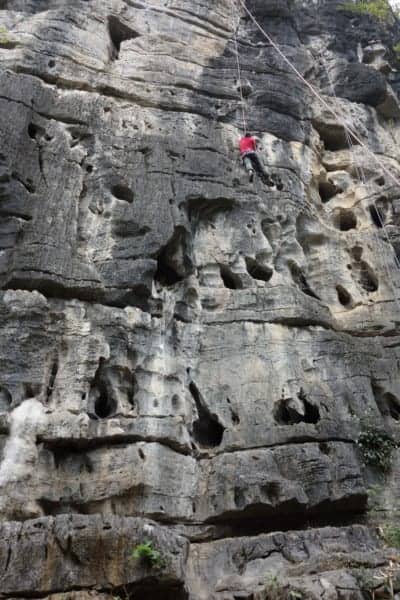 This of course made the climbing much more interesting and fun, travelling is after all about finding new experiences and challenging your perceptions of what you think you know about something… but it felt much harder than the same grades back home! But with climbing style vary vastly and as such you adapt to the style you encounter the most! This is definitely something we don’t find in England, even on our few limestone crags! These routes were also much higher than the short and technical routes back home, some over 100ft high, meaning your arms run out much faster, Yangshuo rock climbing is no joke! 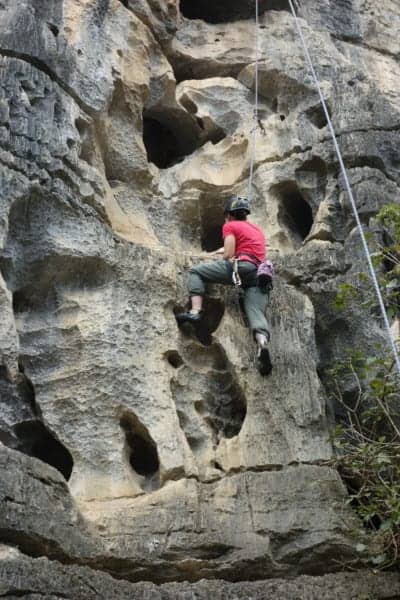 Having fun and not taking it too seriously!

Originally we headed here wanting to get straight back into the thick of things, rent out gear and a guide book and lead some routes on our own in the Yangshuo mountains. In the end we priced up going on our own or with a guide and it worked out to be pretty similar. Not knowing the area we headed out with a guide and were glad we did so. With a months worth of not climbing behind us as well as the strange new features of the rock we probably wouldn’t have been able to do much on our own and it turned out Yangshuo rock climbing is pretty intense! 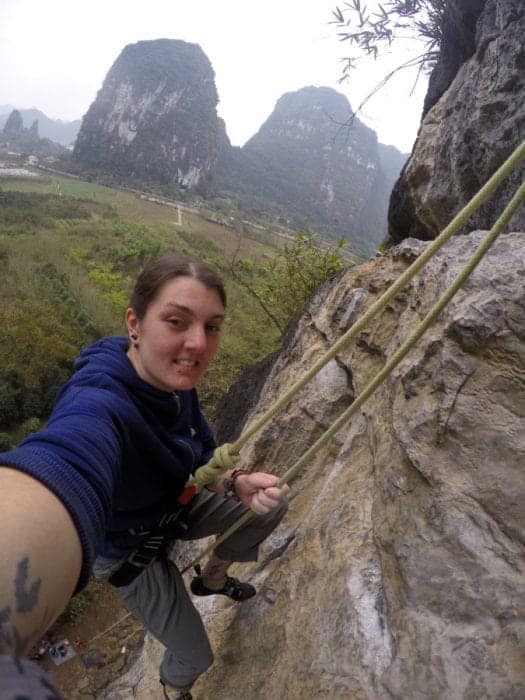 We still fancied leading some easier climbs but after top roping a few long routes we soon realised our arms were shot at… this is what no climbing does!! So instead of seeing it as we do at home, pushing ourselves and if we are honest sometimes stressing ourselves out about sending a route, we decided to just enjoy the fact that we could climb on these amazing features without any pressure or fear! it was quite liberating to go back to climbing in this way! 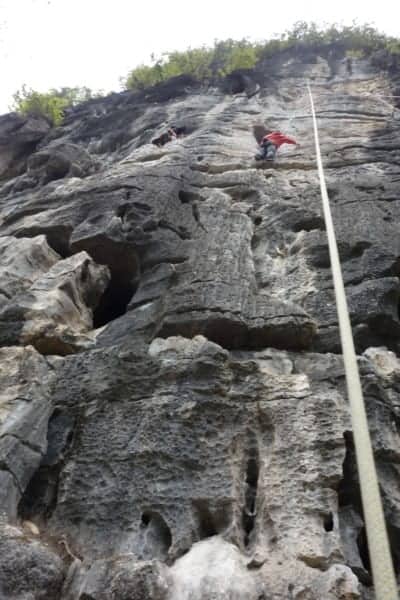 We did end up climbing some routes that were around the standard we lead back home (around 6b/ 5.10b) which was nice too. But wow, I am not sure I would have liked to have lead over 100ft of 6b climbing on this crazy rock, but maybe after our intro into Yangshuo rock climbing we can come back one day for a full on climbing trip! 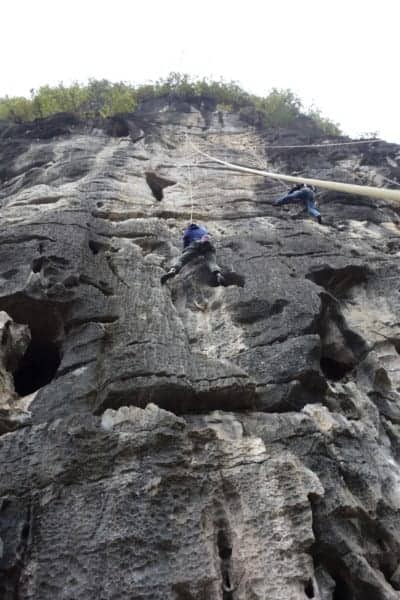 Looking forward to more climbing as we continue our adventure around Asia!

After our first experience climbing on the limestone of Asia we can’t wait for more! We have our sights set on spending a couple of weeks on the Thai island of Krabi. A well know climbing destination we hope that in staying and spending longer at the crag we can have a more serious climbing adventure and get more used to the rock in this region! But for now it was fun to just get back on the rock and try out a completely new style! 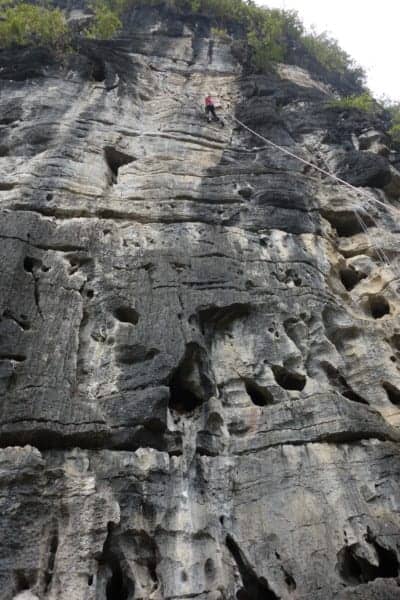 How to go climbing in Yangshuo?!

Climbing in Yangshuo is easy to organise, all over the town there are shops with knowledgeable locals who will rent you out the gear as well as guides or just take you for half a days climbing. The guides will tailor the day to your experience levels with different crags, routes and climbs available. 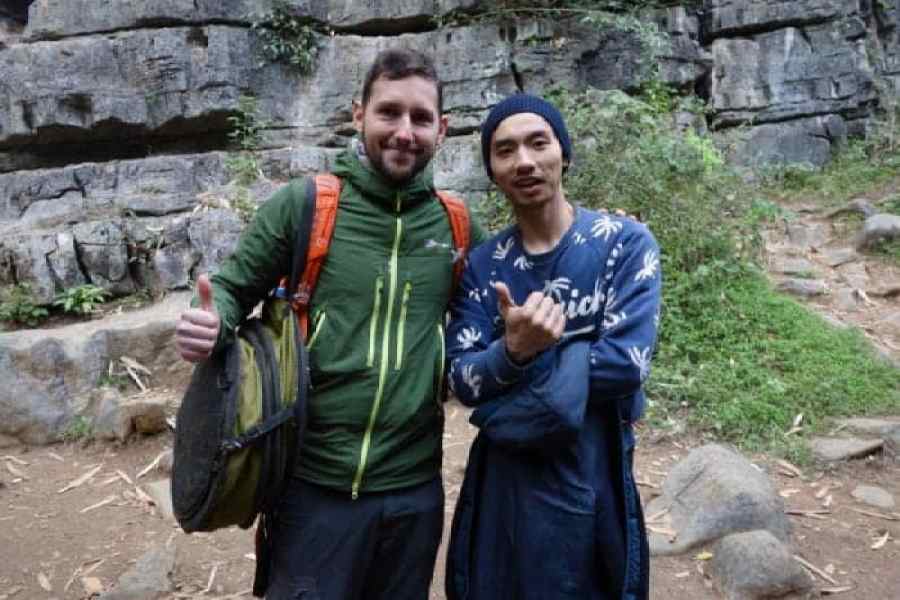 Expect to pay around 260 Yuan for a guide (around £30) and roughly 200 Yuan to rent out all the gear you would need to go on your own (bear in mind that you will need to pay around 1000 Yuan deposit for all the gear combined and also probably rent a bike or take a mini bus to the crag too). 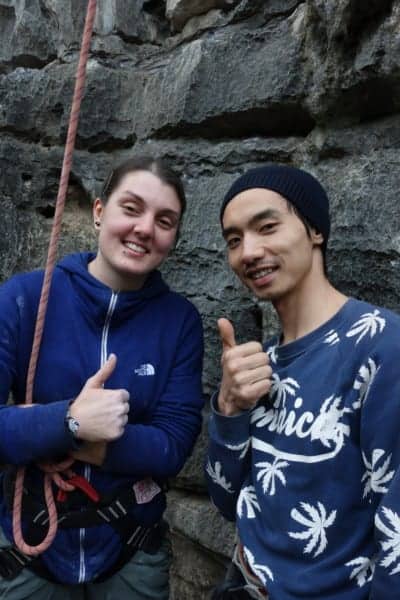 Have you ever been Yangshou rock climbing?

Wow this is awesome. It certainly does look tough and yes, very high. Good on your guys for giving it a go, looks very hairy up there and I would never have thought of climbing in China.

Even for us we never knew about the climbing there, certainly a new style for us but good fun and in amazing surroundings!

Now this post I like, the reason is, looks like we are heading to Yanhshuo later this year as we got a friend out there in that village. So gonna to try some of this. 🙂

You guys will love it over there, make sure to go to Sudder street hostel, they have privates too, absolutely stunning place!