After visiting the Great Wall of China next on the Chinese bucket list has to be the famous and mysterious Terracotta warriors. Found completely by chance in the middle of a field this army of ceramic is a marvel to see. Buried for two millennia these warriors, rumoured to number up to 8,000 are each unique, built to stand guard in the afterlife. Here’s how to do the terracotta warriors Xian day trip!

What are the Terracotta warriors and why are they here?

The Terracotta warriors are a collection of sculptures of the army of the first emperor of China: Qin Shi Huang. Its purpose was to protect the emperor in the after life both in spirit and to ward off thieves in the land of the living. Buried with the emperor in 210–209 BCE they were discovered by accident by farmers digging a well in 1974. The army includes warriors, chariots and horses and it is estimated that there are over 8,000 soldiers, 130 chariots with 520 horses and 150 cavalry horses. 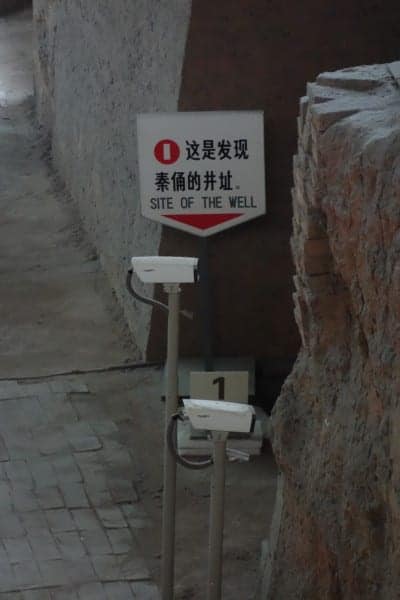 Work begin on the mausoleum in 246 BCE and involved over involved 700,000 workers. It is thought the emperor chose the site due to its location to the beautiful Mount Li. Each of the figures is life sized and has individual features. Their faces, height, uniforms and hairstyle differ according to rank and position. Each would have also originally been brightly coloured increasing their life like appearance. Much of the manufacturing of army was done in factories in a line production fashion and assembled later on. 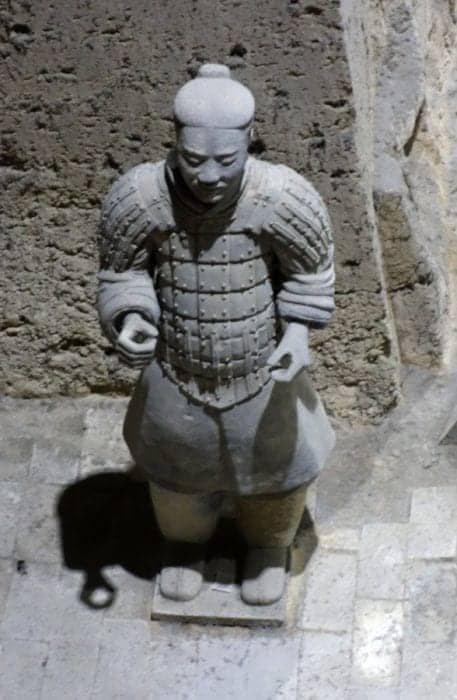 It is generally thought that the pits were looted by Xiang Yu and subsequently burned. This is considered to be the reason for the collapse of the roof and crushing of the figures below as well as why much of the bronze weaponry the soldiers would have held is missing. Many weapons were also made of wood which had rotted away over the year, however some arrow heads and spears were still found at the site. All this history is well worth the short terracotta warriors Xian day trip!

What can be found at the actual site?

The museum covers 16,300 square meters in three sections, Pit No.1, Pit No.2 and Pit No.3. Each of these pits contains different elements of the display. From closer views of the warriors both in the pits and in cabinets surrounding them to the large open view of thousands of these soldiers standing in lines. Here you also get to see some of the excavation work itself as well as the restoration. There is also an exhibition centre with many warriors on display and films all about Qin Shi Huang. 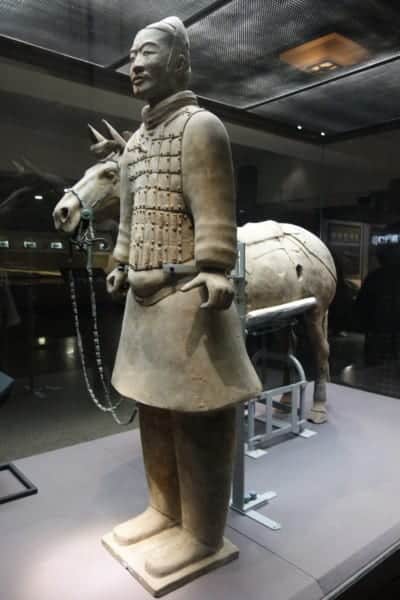 Many people had said to us that hardly any of the statues are still here, some are making the rounds on a tour around the world, and that it wasn’t worthwhile. However we can pleasantly report back that there are in fact still thousands of statues still standing here and many more left to be unearthed, making this stop off point in China very much worthy of our time. This means that you will not be disappointed if you take the terracotta warriors Xian day trip! 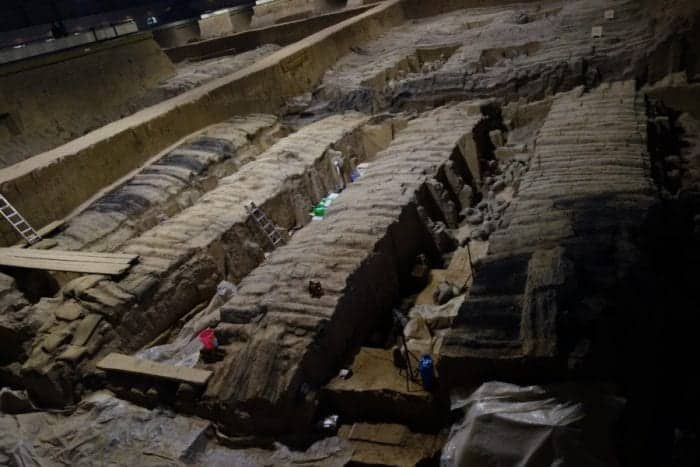 Coming face to face with these magnificent and intimidating warriors really does make you understand the power these emperors had and how different the world would have been those 2,200 years ago. Here you really get the sense of just how intricate these statue are, the details in their eyes, the folds in their clothes and even the hairs on their heads. It really is mind blowing and awe inspiring to see the level of artistry and commitment from those who made this incredible army.

We decided to visit the 3rd pit first as it is the smallest and save the largest pit number one until the end. This way we could work our way up to the best viewing of the warriors. It made for the perfect terracotta warriors Xian day trip! 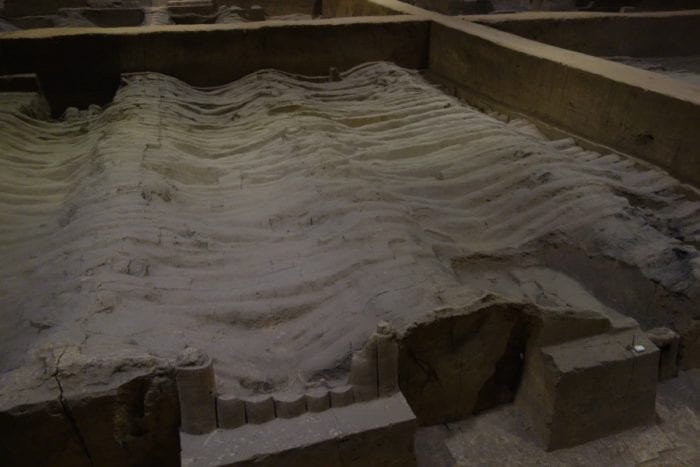 Pit number 3 is a lot smaller than the other two but is also so much quieter. Here you can get a lot closer to the edge of the pit and at one section almost walk right over it. Despite there being a smaller number of warriors here they are mostly all higher-ranking officers so they do contain some extra details the others don’t as well as being slightly taller. It was a nice introduction to the site.

From here we crossed over into pit 2. This room is a lot larger than the 3rd pit but in truth there is actually less to see here. In its own right this pit is interesting to see, it is mostly still yet to be excavated and here you can see the wooden ceilings, beams and posts that would have been covered with reed mats and layers of clay for waterproofing before being covered with soil. 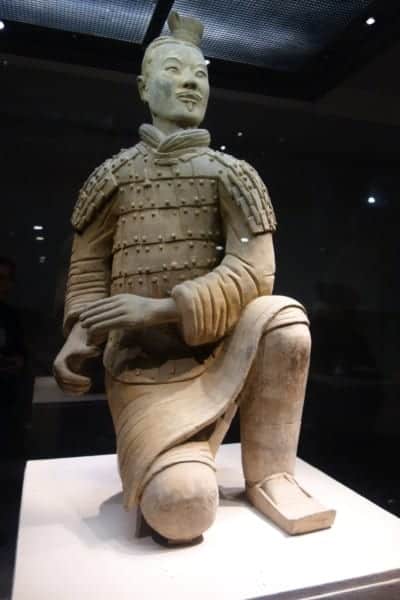 This is still very much an active archeologically site with work on going. You get to see here exactly how to warriors are found: In pieces and entombed in mud that over centuries has turned to rock. It really makes you appreciate more the painstaking work that has gone into excavating these ancient treasures. Pit 2 also offers some great examples of different types of warriors in cases for you to see up close which really allows you to see the fascinating detail on each one.

However it was pit 1 that we came here to see and heading over there our hearts began to flutter with the realisation of this amazing dream becoming a reality. Stepping inside the huge aircraft hangar the sheer scale of the place really began to become clear. The rows and rows of warriors staring intensely back at us was an intimidating and mind blowing sight. You really get an idea of the purpose of these statues and just how imposing they appear. 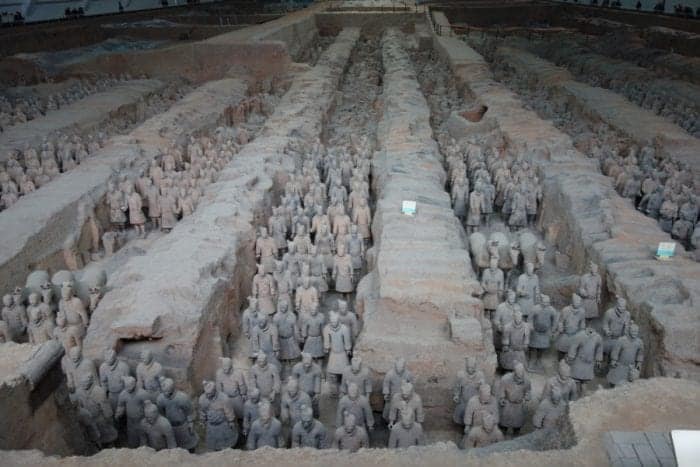 Walking around the site you get to see some really great angles on these warriors. But also around the rear of the building you can see step by step the process in which each statue goes through in order to be ready to display.

From a pile of pieces in trays labelled up depending on which part of the body they belong too, to literally tiny pieces being sifted out of sand. You see how they bring to life this most complicated jigsaw and just how much work goes into creating this exhibition. 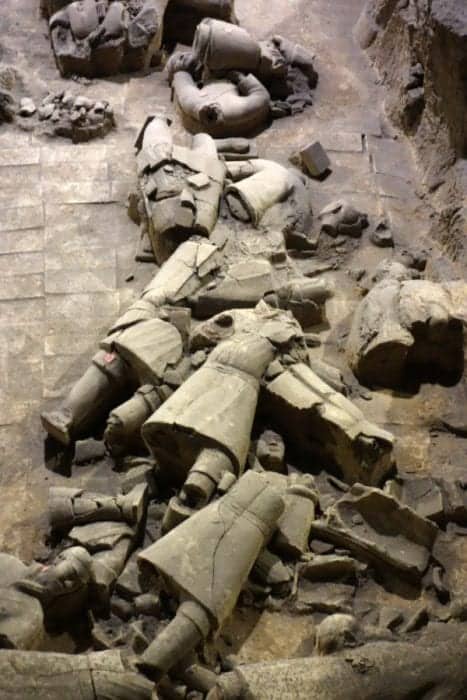 For us we were really blow away by this history on display here and so pleased we made this journey. It might have required a 15 hour night train but to see these ancient marvels really was worth the effort of taking the terracotta warriors Xian day trip! 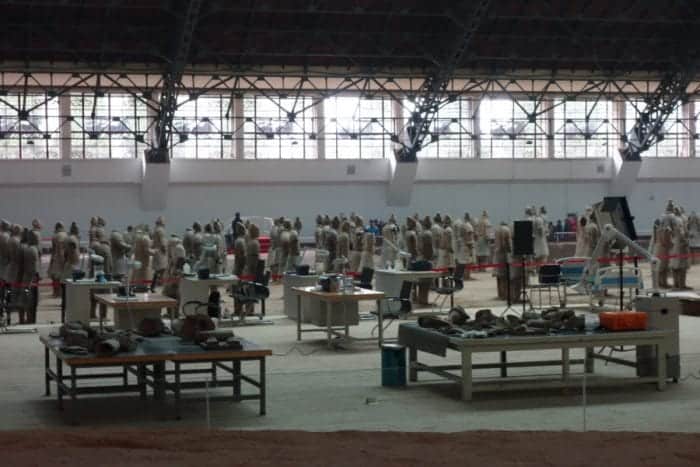 How to get to the Terracotta Warriors from Xian

Take the bus no 306 (tourist bus no 5) from the bus station near the main train station. Be very careful not to get dragged on to any other bus by scammers, especially the fake number 5 bus. It should take about an hour and cost 7 Yuan. It really is quite easy to do the Terracotta warriors Xian day trip! 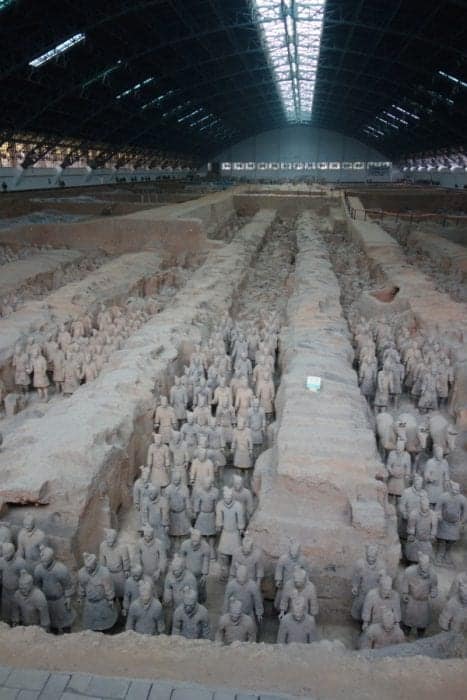 Terracotta warriors Xian day trip. How much does it cost:

The ticket office and main entrance is right by the car park. Don’t make the mistake we did of walking all the way through the alley of annoying shops only to have to walk all the way back!

The entrance fee for the museum is CNY150 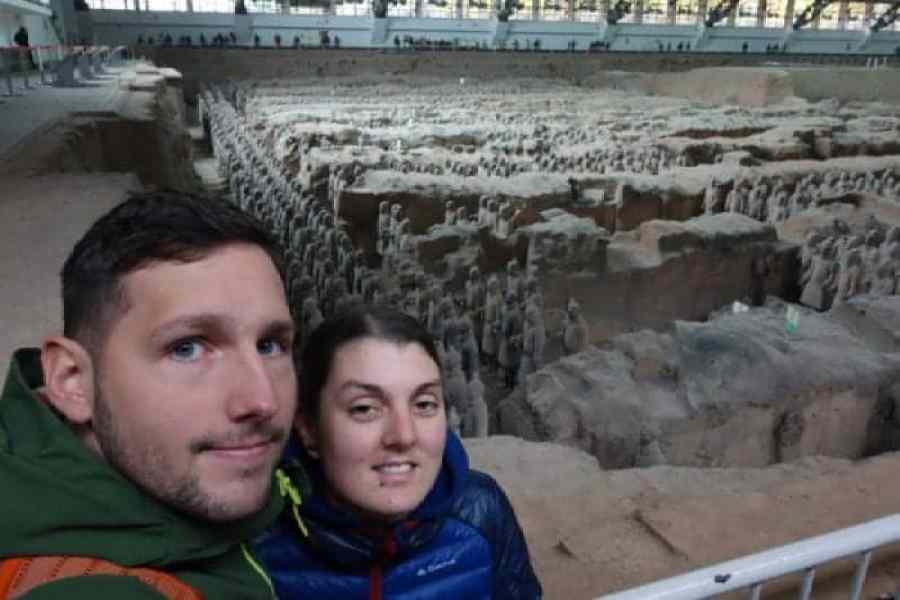 Have you been to The terracotta warriors China?

I think I saw it first time in Jackie Chan’s movie and it was already amazing. How much more would it be in real. Looks like there are not many people in there, only soldiers. 😀

Oh, I will have to check that out and watch the movie now!! It is really quite intimidating seeing them all there, its like they could attack at any moment!

I’ve gone back and forth on whether or not the terra cotta soldiers would be cool to see. Is it pretty crowded with tourists? Also, are there informational signs in English to help learn about what you’re seeing?

For us it is somewhere we we so glad we made the effort to head over too. It was a little crowded yes but then again that is just China for you! If you make your own way there then you can stay and take your time and go between “waves” of groups! The signs could be better yes, but there is an audio guide available though.