Landing in Brisbane we were keen to head out of the city quickly, not because we don’t like Brisbane, but because we knew the best of what Queensland has to offer exists outside of the city limits. Exploring the Sunshine Coast in our camper van was a dream, a bucket list ambition achieved and had that overwhelming feeling of freedom about it. Stopping off by the sea, jumping out of the van for a swim before pulling up at a campsite for the night. It’s what backpacking Australia is all about. After a few days we pulled into Noosa… and truly fell in love! Exploring the Noosa National Park and walking the incredible coastal trails we dreamt of when we began our Australian Adventures! Here’s our Noosa national park walk guide!

Noosa: The beautiful surfers heaven with a hint of Miami!

Noosa itself is somewhere between the laid back surfer vibe of Byron Bay and the swanky condos of somewhere like Miami or a Californian seaside town. It’s got that real mixture of well off vacationers dining in the fancy restaurants and the hippy backpacker and surfer crowd hanging out by the public BBQ’s and showering on the beach! On the surface it can come across a little little pretentious especially if you fell in love with the chilled out vibe of places like Byron Bay and it certainly does have a much more sophisticated and slick feel to it than places like Byron, and in many respects it does feel a little more up market, which is a good and a bad thing really. But step outside of the condos and fine dining and at its heart is still that laid back beach lifestyle, the rolling waves and incredible coastline that draws this eclectic mix of visitors to its blissful shores. 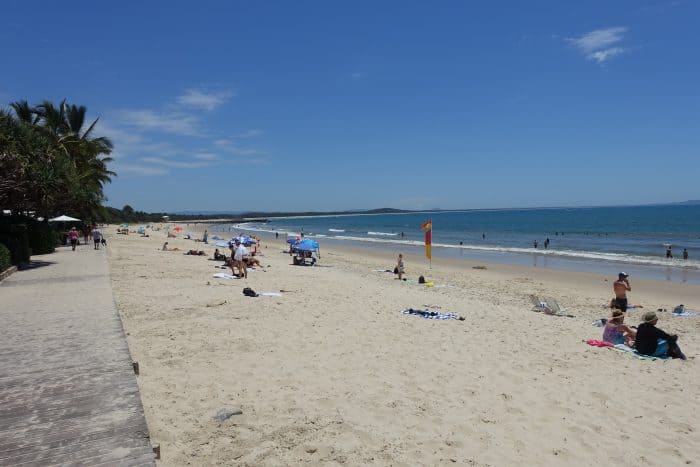 Noosa is a small town so really there is only one place to start when you arrive, hit up the main beach! Just like many locations along the Sunshine Coast, it is of course a world famous surf destination! The Main Beach at Noosa is a perfect place to learn to surf in Queensland with its amazing breaks and clean gentle waves. It’s also a great spot for swimming or body boarding too and being one of the only north facing beaches on the East Coast of Australia it is quite sheltered. It’s basically that picture perfect Australian beach that the country is so famous for, clear blue water and just the right temperature, powdery soft sand beaches with sun and waves guaranteed! 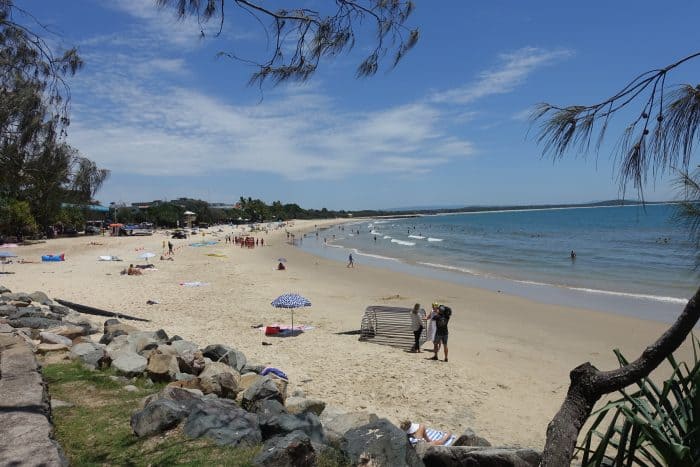 The incredible Noosa national park walk along the amazing coast

Starting at the end of Noosa Main Beach is the incredible Noosa national park walk. Noosa initially for us was just another nice coastal town along the Sunshine Coast, an incredible beach, great places to eat (if not out of our budget but hey ho!) and somewhere with that real holiday vibe.

But heading out of the town and into the beautiful Noosa National Park it was here where we really fell in love with the place. The trail wasn’t too crowded, along the way were several much quieter beaches and the views out through the lush scrub on to the incredible sapphire ocean were out of this world. If you come to Noosa, the Noosa national park walk has to be your first port of call! 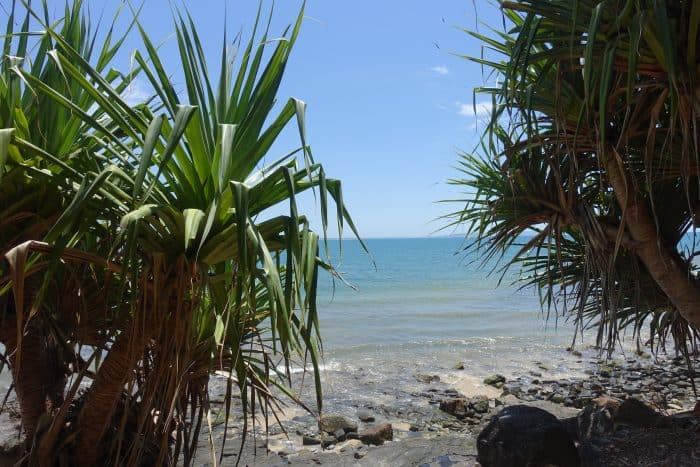 The Noosa national park walk is just under 7km and should take around 2 hours, though you probably want to give yourself much longer than that as you will be stopping for photos every few paces and might also want to take a dip or two along the way. The route starts at Noosa Main beach and finishes at Sunshine beach where you can get a short bus ride back to Noosa. 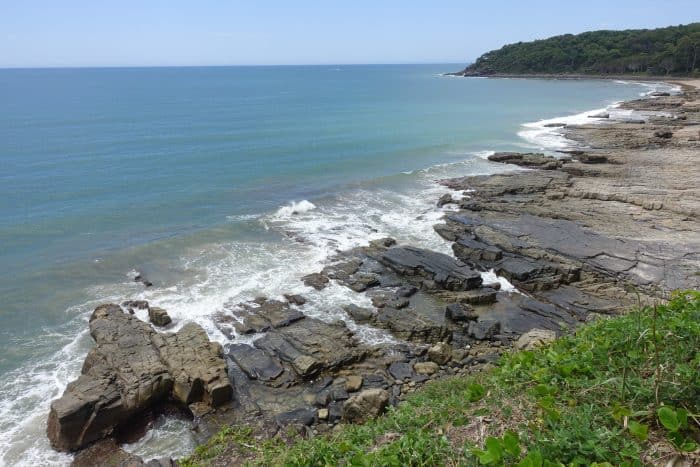 The initial section of the track is a boardwalk that snakes around the main incredible beaches and bays of Noosa national park walk, the trail itself is mostly covered by trees and shrub and provides good shelter. If you are lucky you might even spot a wild koala in the trees above you! Pretty much as soon as you set off walking you are greeted with amazing views out over the beach from its far end and the aptly named “First Point” is a great vantage point to take in the view. Further along and on the track proper is “Boiling Point” which due to its position provides 180 degree views of the stunning blue ocean. 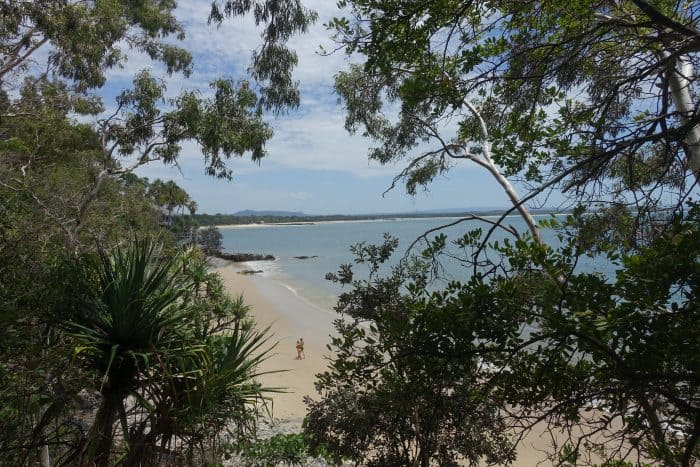 Continuing around to one of our favourite spots on the Noosa national park walk is “Tea Tree Bay“, this sheltered and secluded little beach is the perfect hideaway from the business of Noosa itself. The unbelievably clear emerald waters are almost irresistible and the when framed by the enchanting Pandanus trees and incredible palms its like something from a postcard! 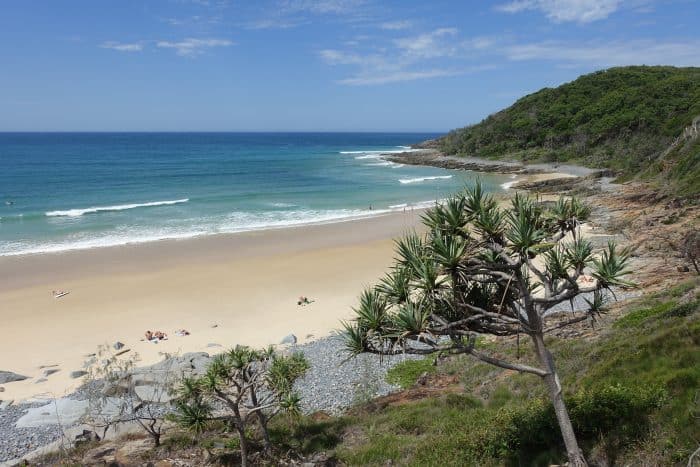 Further along “Dolphin Point” is a worth while mention as it was indeed where we were able to spot some wild dolphins playing just off the coast. It was quite a magical moment being our first time spotting them in the wild and a highlight of our day on the Noosa national park walk. 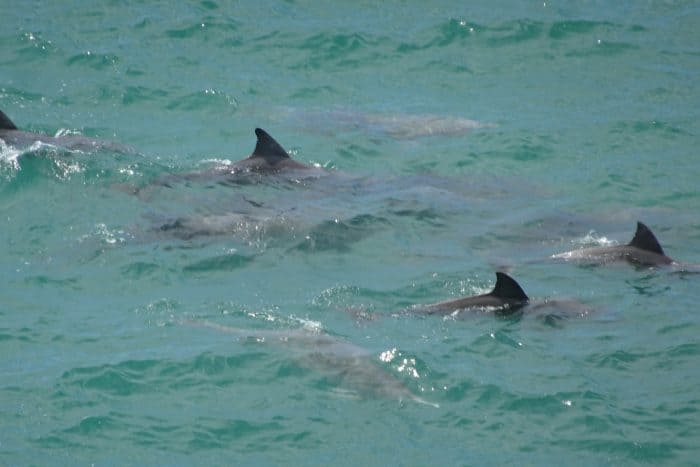 Other incredible spots include other small and secluded desert island type beaches such as those at Granite Bay and Picnic Cove, these being further down the track are highly unlikely to be too busy. These spots really are compete paradise with the golden sands, azure blue water and lush green forest beyond. If you want to do some swimming along the Noosa national park walk then these are two great spots. 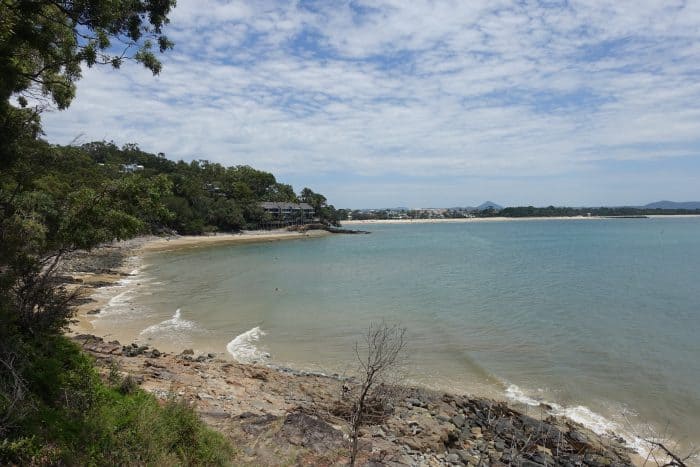 Next comes the real highlight of the Noosa national park walk, the Fairy Pools, this is where the pathway changes from beaches to steep rocky cliffs and is no less magnificent. If you’re looking for an instagram worthy shot then this is it! These incredible rock pools are crystal clear with an uninterrupted ocean view! 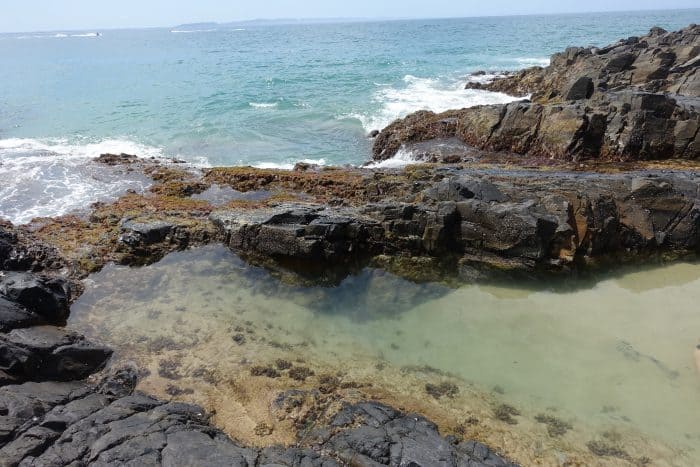 It really is like something from a dream! However, with great beauty comes great popularity, be sure to come early on and on a weekday if you want this magical place all to yourself! 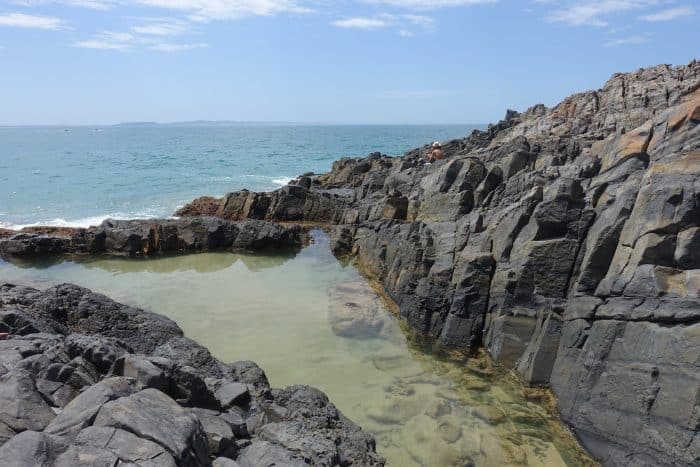 From here the track rounds Noosa Head and Hell’s Gates, a steep, wild and wind swept bay with dramatic views down to the crashing waves below, quite a contrast from the beginning of the Noosa national park walk. 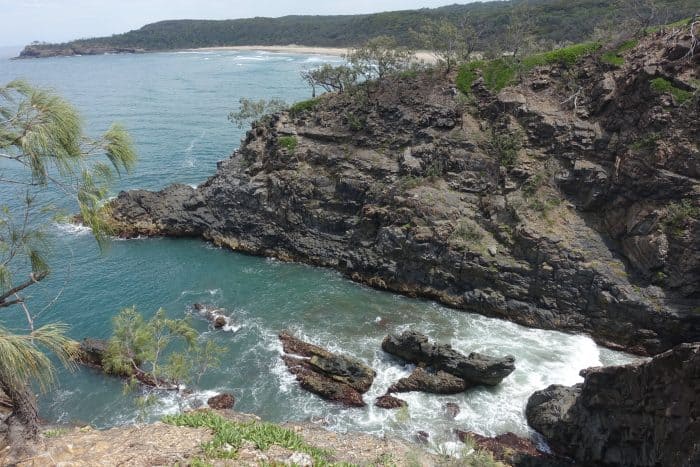 From here you will hit the long and sweeping Alexandria Bay. This 3km long beach is much more remote than many of the others in the area and apart from surfers catching waves at the end of the beach you’ll find it usually to yourself. It’s somewhere for pure escapism! From here it’s a short walk to finish on Sunshine beach where you can take a dip to cool down before taking the bus back to Noosa from the Sunshine Beach surf and lifesaving club. 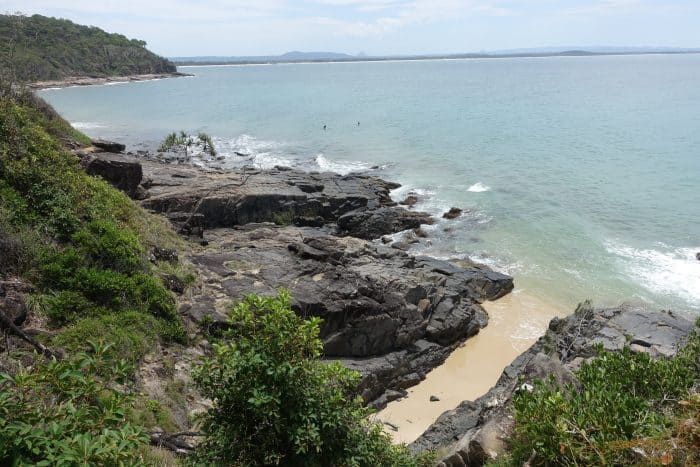 Take some water and food along with you as there’s only one water point along the route and nowhere for food. Try to head out early so you can get a park for one, near the public toilets/ showers/ BBQ area and bus station is one of the best spots, secondly to beat the crowds! Take suncream and your bathers, a towel, hat, t-shirt. Many sections have no cover and it can get very hot. From Sunshine Beach you will need to walk an extra 1.2km to the surf and lifesaving club and catch bus Bus route 627 back to Noosa. Camping in Noosa is expensive, check out this list of free camps nearby.

Have you ever done the Noosa national park walk? What was your favourite section? 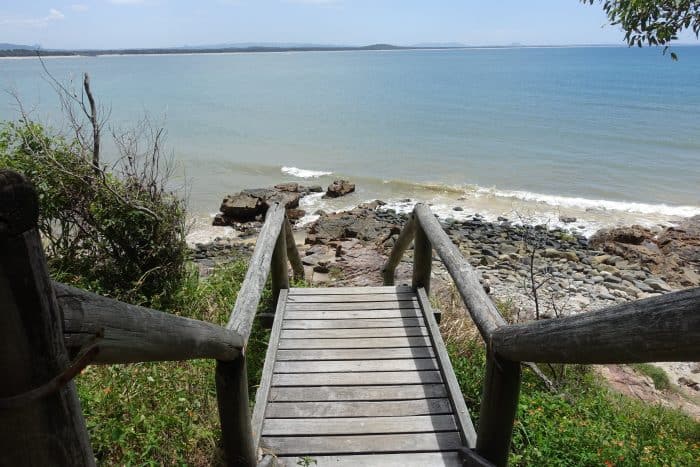 Omg Fairy pools?! I would visit it just for the name, and then it’s a natural pool with a seaview! I would love to visit Australia some day, and doing camper van road trip would be just perfect!

What beautiful pictures! If I ever end up in that area, I’ll definitely check out Noosa Main Beach. You had me at the Fairy pools!!!