In the midst of one of the most quirky cities in the world, passed the towering statue of “Alexander the Great” and the plaster of Paris renaissance style triumphal arch splashed with a rainbow of colours lies political turmoil. In a corner of Europe many know little about a scandal is rife and the public are rising up in peaceful protests every night.we went along to find out more and experience this unique artful show of defiance in the capital of Macedonia. What are the protests about?

Where do I begin and where do I end!! I am no expert on the matter so I don’t want to do into too much detail and risk offending the lovely Macedonian people. But what I believe from what I saw, have been told and subsequently researched is that there is an huge political scandal in Macedonia at the moment. 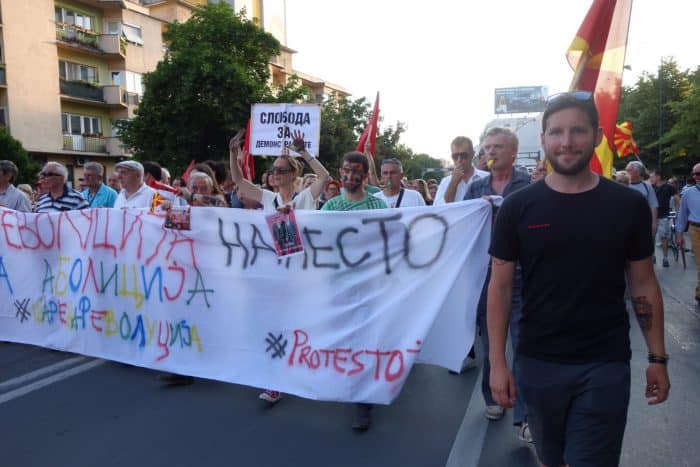 I mean, we don’t hear about these things in the rest of the world because who even knows about little old Macedonia, the country who can’t even have a proper name due to the pressure unfairly being put on them from Greece. If any of the things that have happened here were to have happened in the US, UK or somewhere like France, Germany, Italy etc etc. There would be pages and pages in the news, the TV would be all over it and it would cause global outrage…but in Macedonia, the people are crying out for the world to see, they are making noise every single night to stand up for what is right and to make a change in their country, with or without global support. 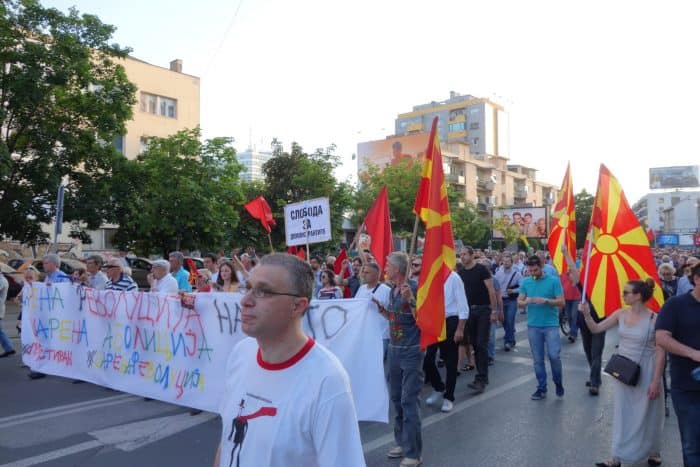 So, what’s going on then? Well, since the government started what they coined “Skopje 2014” back in 2012 there has been unrest surrounding the idea. The people of Macedonia were in large not entirely happy with the style in which the capital city was being rebuilt and also the extortionate cost. Many saw the new work as an embarrassment and a con, making Skopje look fake and cheap and yet costing the country way more than would have been expected. 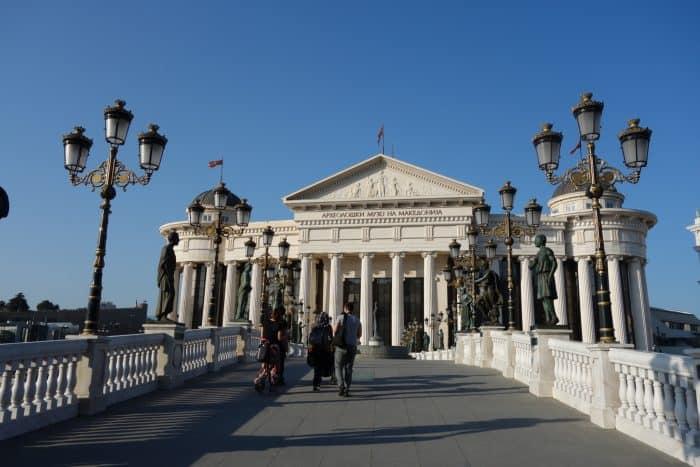 Of course, many people saw these new developments as a way to attract tourists, and on the surface it kind of does. We went to Skopje already knowing about the “weird and wacky” architecture but at the same time we also saw it almost as a joke too. I could see how this happening in my city would anger me and how the money I saw spent on such frankly ridiculous items such as the farcical “Triumphal arch” and the enormous “Warrior on Horse” which for legal reasons they can’t name Alexander The Great! 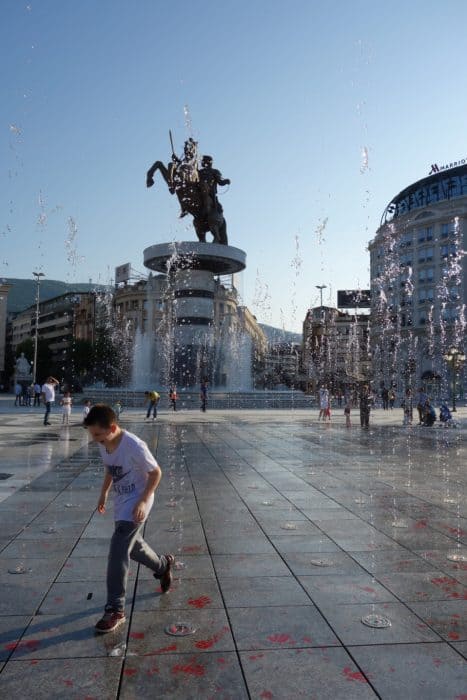 So after a while the people began to get suspicious about the true cost of all these statues, buildings, facades and ornaments popping up around the city. The fountain in the main square for example cost around 17million Euros, but one almost identical to it in London cost only 5million Euros. The buildings that look like grand carved marble are nothing more than cheap moulded plaster and the huge bronze statues just painted imitations. So where is this money going? 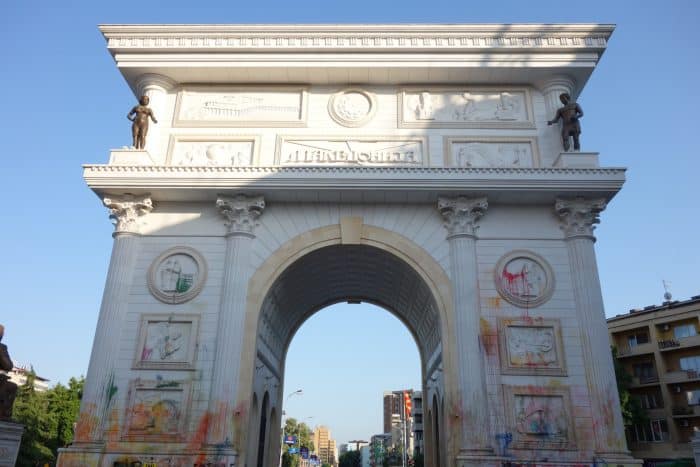 In Macedonia they have a problem with mafia, it is everywhere, infiltrated into the government, banks and institutions at the highest level. To simplify it they are money laundering through these grandiose projects and the money they do actually spend on building these ridiculous constructions comes straight out of the peoples taxes. They are getting royally screwed! 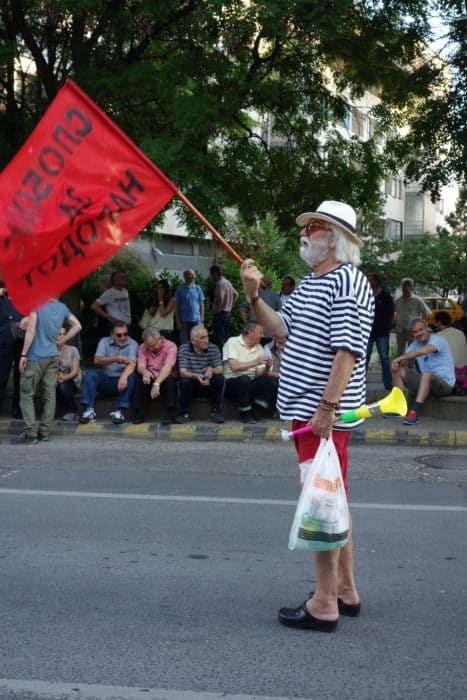 To make matters worse at the beginning of the year the prime minister pardoned around 50 officials and the previous Prime Minister on several counts of corruption and wire tapping without trial. This controversial ruling was when the protests started, now every night apart from Sunday the people march! 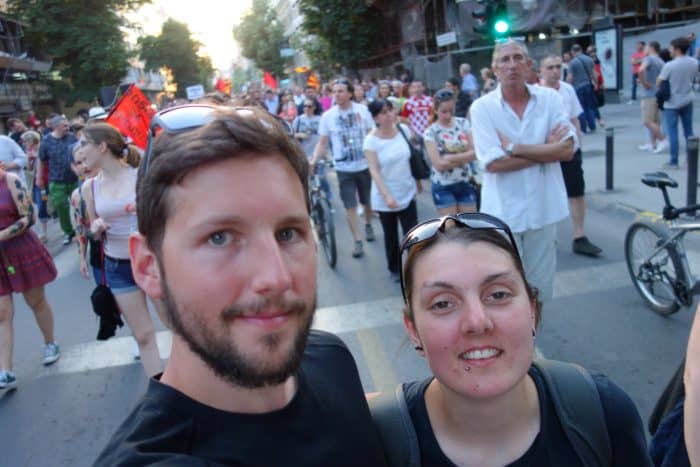 Joining in on the “Colourful Revolution” : A carnival atmosphere at the peaceful protests

As we looked around the city for the location of that nights protests we saw a long time of riot police sealing off an entire street. We did wonder at this point if the “peaceful protests” were just that or if we might be better off staying out of the whole thing. But always wanting to seek out new experiences and also support social justices we marched on. In fact one of the officers even pointed us in the right direction! 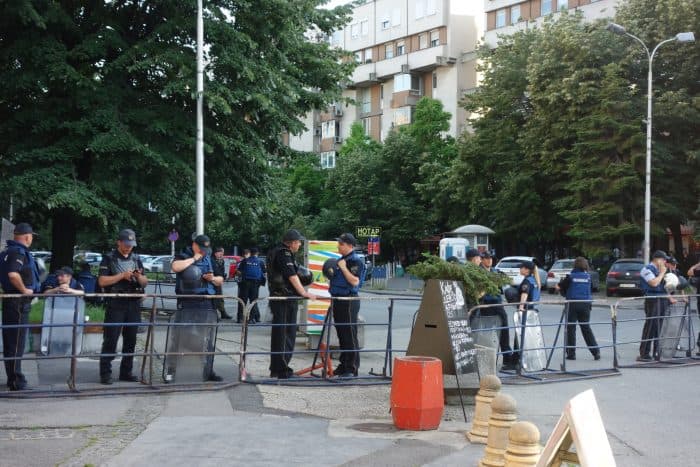 As we rounded the corner the sound of whistles, horns and “Freedom” by George Micheal rose up into the summer evening sky. We knew we were on the right tracks. Just down one of the streets in a residential part of town the entire road was filled with people dancing, singing, waving flags and generally having a great time. If you didn’t know any better you would think you had stumbled upon a street carnival, full of hope and joy. 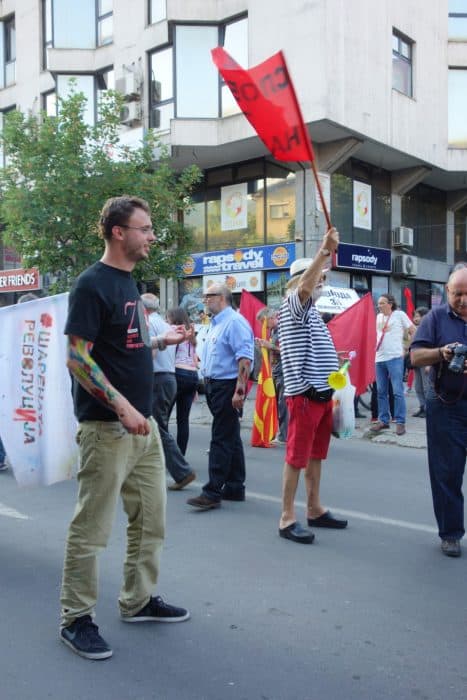 But behind all the partying, face paint and music there were a collection of people in balaclava and face masks pacing up and down. Readying themselves for a battle, ready to make a statement and to make a change. What we loved here though was the collection of people, old and young were out in force to try to make their country a better place. 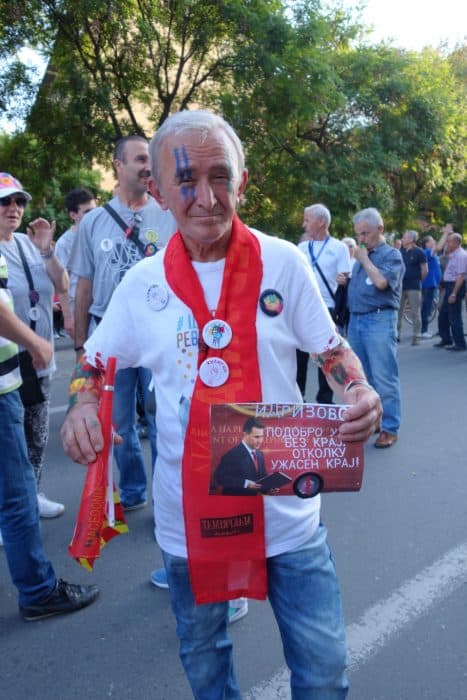 After a while of building up we were ready to go, those in the masks got out cans of spray paint and covered a white banner in a multicoloured slogan in Cyrillic. Many of the others began spreading paint across their arms and faced, a rainbow war paint as the battle lines were drawn once again. 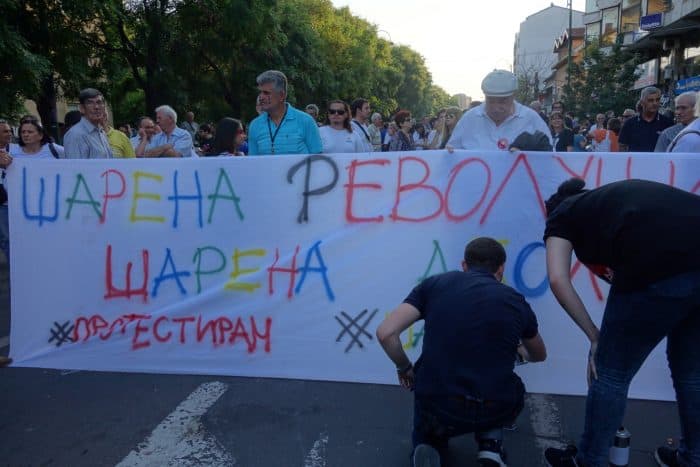 Off we marched, whistling and cheering along with the music, the likes of Rage Against the Machine, The Beatles, Bob Marley and a collection of local and global punk anthems were used. As we began the carnival atmosphere was in full flow, people dancing in the streets and colour everywhere to be seen. 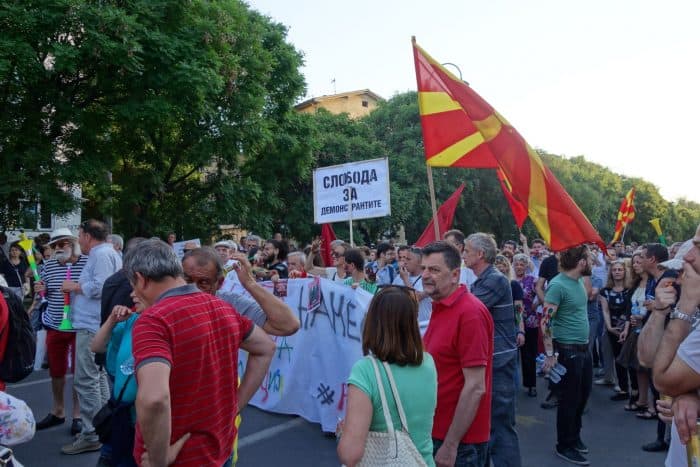 Then we stopped, those in masks piled out of the back of the leading vehicle with paint in hand. This was where the real fun and games began! Now we found ourselves again stood in front of the very line of police we had walked past just a little while before. This time the crowd opened up as a young girl painted “Information for pigs” in huge Cyrillic letters and an arrow pointing towards the police and the headquarters behind them that they protected. At no point did any law enforcement intervene with these actions, which felt somewhat odd! 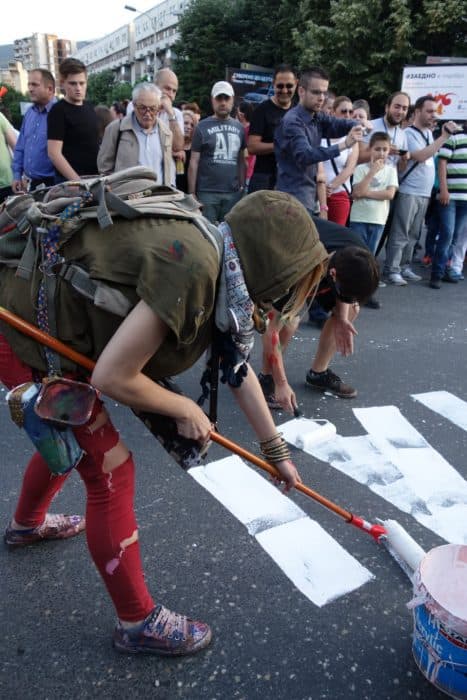 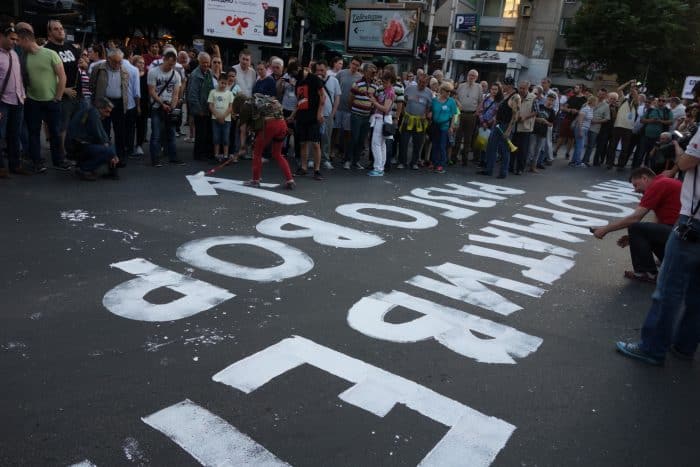 The march then continued on down the main streets, we passed several other buildings and monuments splashed with a rainbow of paint. Each time we did the chants would get louder and the crowd more and more energetic. Finally we stopped at what would be the main event of the protest. The parliament buildings just across from the now multicoloured Triumphal arch! 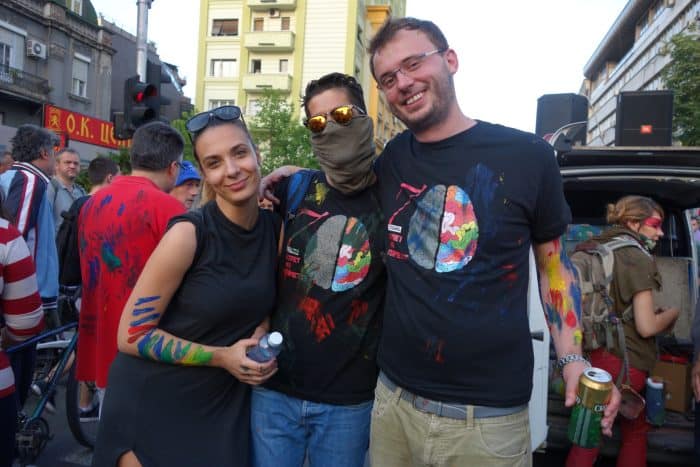 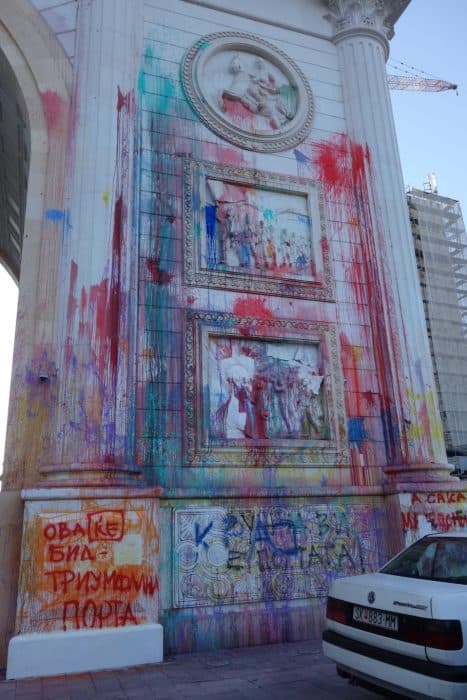 Yet more slogans were painted onto the tarmac as even more heavily armoured police looked on. You could see where others had been blacked out from previous nights. One of the organisers stood up in the middle of the crowd to give a rousing speech…I only wish I could tell you the contents of it but we can use our imagination! 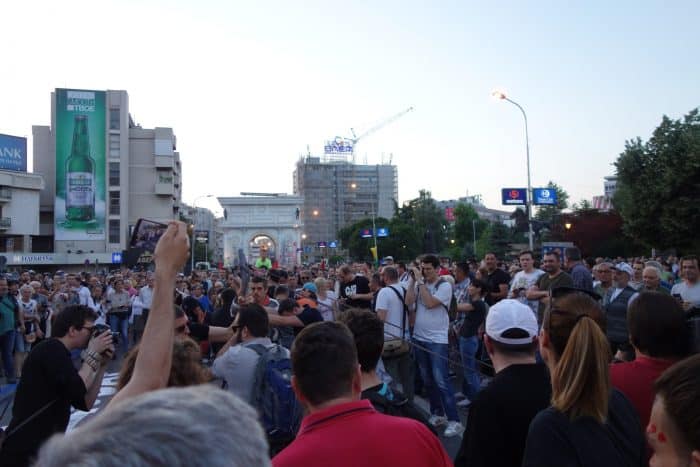 Now was time for the real protest to begin, buckets of paint bombs appeared as if from nowhere and huge self made slings entered the crowd. We found ourselves in the centre of the action, stood right next to one of the slings as a paint bomb flew past our heads and splattered against the once clean white “renaissance” building. 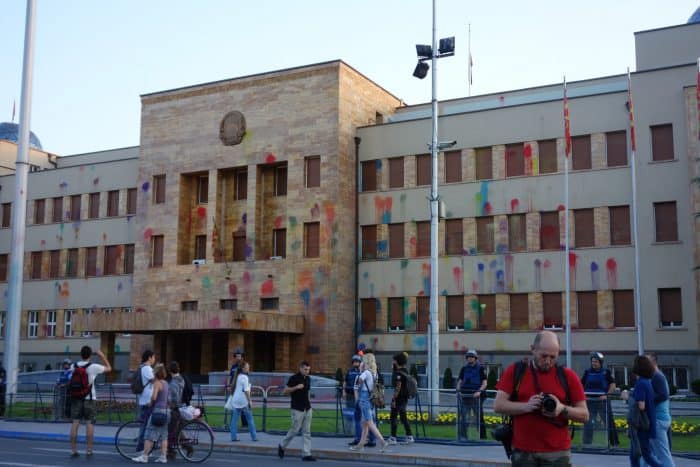 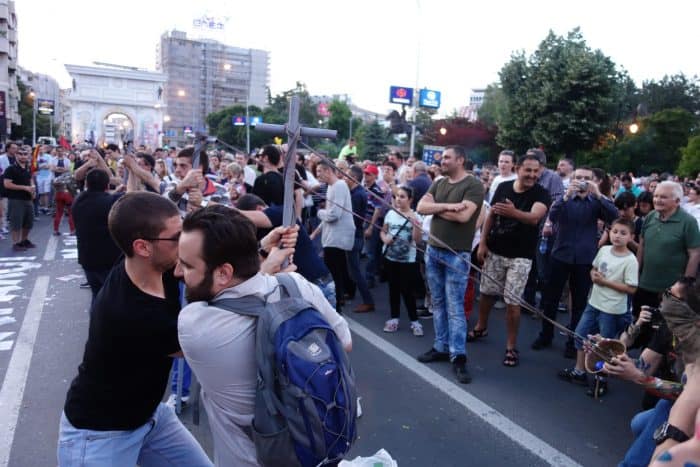 We were in the centre of the storm here, people all around where throwing paint bombs, shouting, lighting flares and generally having a good old anarchistic time. It was infectious, we were shouting along with slogans we didn’t even understand and even having a go on the sling shots! The atmosphere was electric and as the bright yellow and red flags flew all around us we felt like we were part of social change for the better. 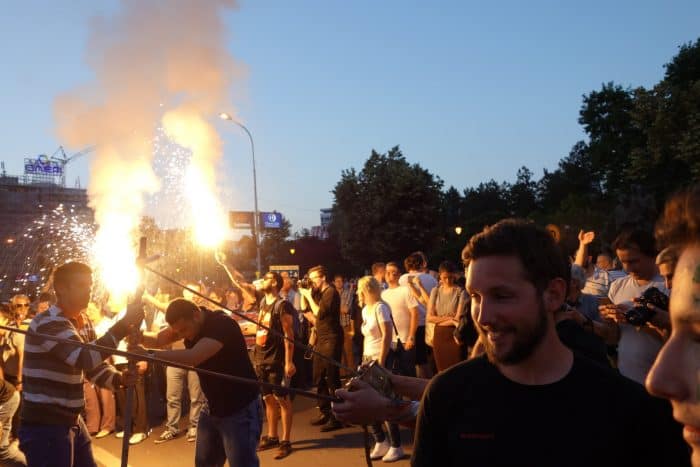 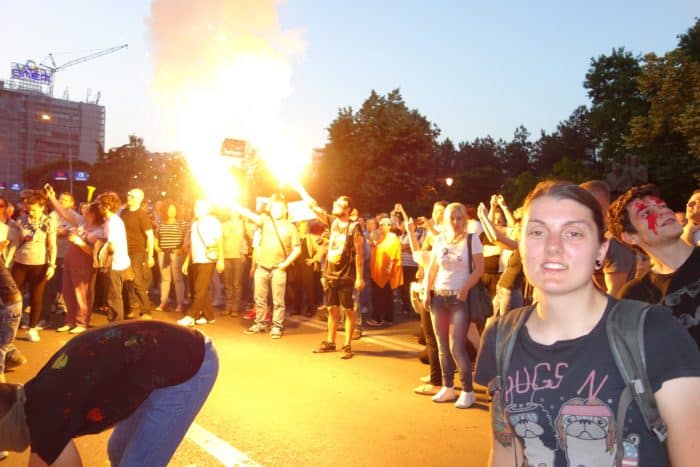 As the paint ran dry the crowds dispersed, the police were laughing as they looked at each others now multicoloured uniforms and everyone went home without incident, hopefully leaving Macedonia a better place. 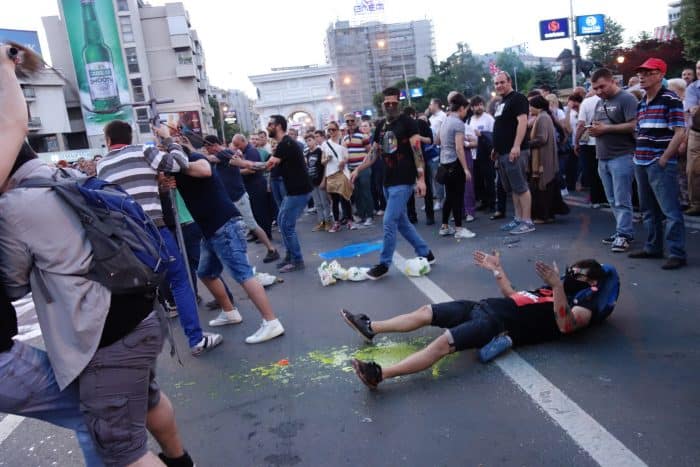 Have you ever seen or even gotten involved with a protest whilst travelling:

Wow. Wow. Wow. Like you said, being part of the western world, this has not come across my new feed. What an interesting broadening experience this must have been for you guys. I had no idea about the mafia ties in this country.

Thank you very much. It is what we love so much about travel is how you find out so much more about the world that the news allows.

Wow! This is simply amazing. I have never been in a protest before let alone one in another country! Thank you for the insightful read.

Yeah it was quite a thing to go to!! Thanks