Our first impression of Sofia wasn’t amazing, we arrived in a storm from Kosovo and the big city almost ate us up! We initially stayed in quite a run down area of the city and we felt like we were just coasting through. After having to move to another hostel across the city that’s when the real love affair began, staying in a leafy neighbourhood in such a fun and east going place we felt right at home. Exploring the many sides to this city from here, the mountains and its complex past and bright future as well as taking unforgettable trips out of the city it cemented itself as one of our favourites!

Not many people are aware that this bustling modern capital is so close to an amazing mountain. During the winter the locals flock up Mt. Vitosha for the closest ski resort you are ever likely to find to a city centre. But seeing as it was summer and the temperatures were winding up we decided to hike to the beautiful Boyana waterfall in the forests that line the mountainside. Here the ice cold spray cooled us down from our hike as it crashed over 50ft onto the craggy rocks below. 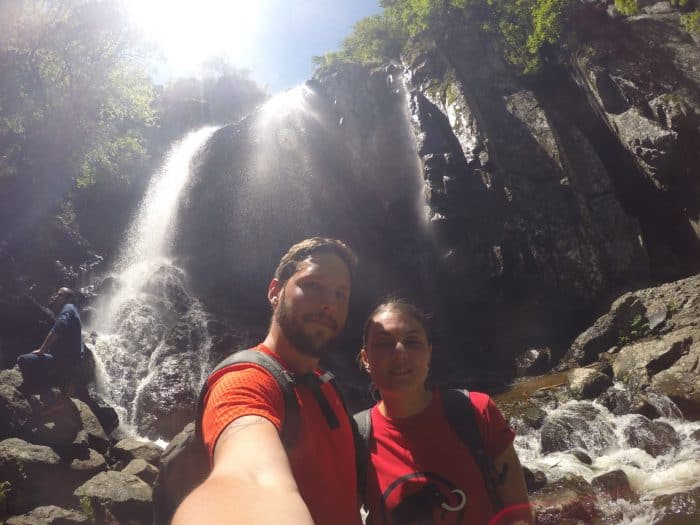 We visited here on the Free Green Walking tour from the city centre which runs everyday from outside the Ivan Vazov National Theatre. This hike is a 5 hour round trip that takes in some of the most wonderful natural scenery around Sofia including the waterfall and lake as well as views over the city. We also called by the UNESCO protected Boyana church with some of the oldest frescos in the world inside! 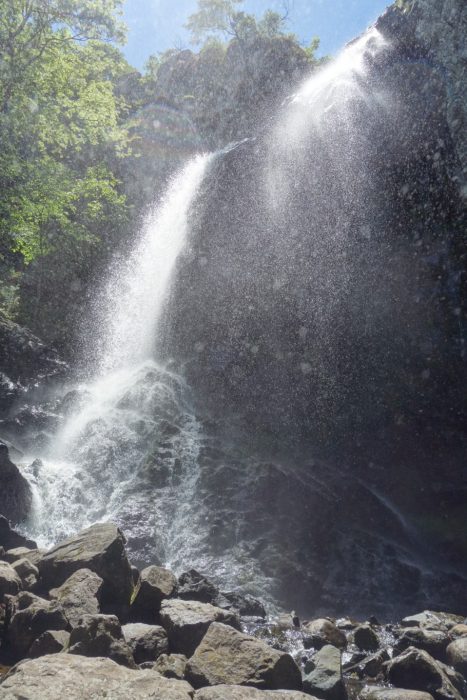 Explore the communist past of Bulgaria

Sofia is a wonderfully modern city which has stepped into the 21st century whilst retaining some amazing architecture. But there is no forgetting the history of this country, once in the grips of communism much of the locals have very strong and alternative views on this. Many of the communist icons that adorned the city have been torn down after the regime fell, but for the interested historical explorer they are out there to be found. 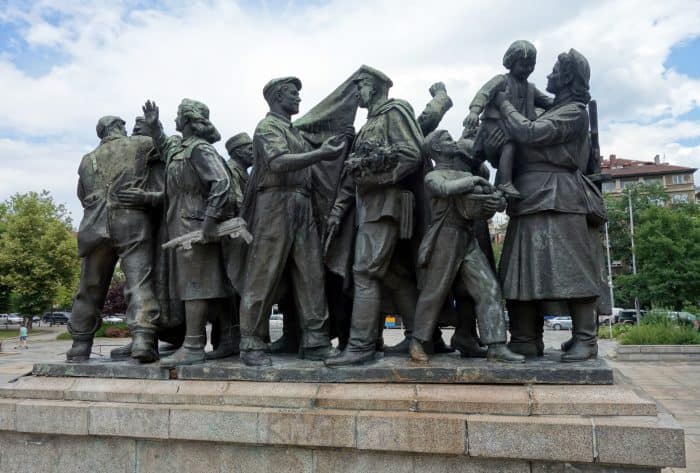 The most prominent places within the city to see evidence of a history many try to cover up in at the Bulgarian Communist Party Headquarters known as The Largo. Built in the 50’s this collection of buildings are prime examples of Socialist Classicism architecture. The removal of the symbolic red star from the tower by helicopter and its replacement with the flag of Bulgaria has become an iconic moment in the countries recent history. 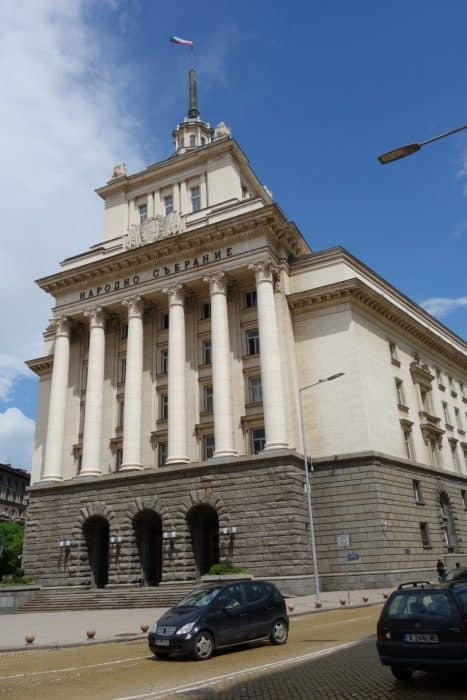 Close by there is also the Monument to the Soviet Army. This monolithic pedestal that rises high into the sky is surrounded and topped by typical Soviet style sculptures and reliefs. This monument is still a controversial subject in the city and has been used on many occasions as an artistic canvas for protests as well as being a local hangout spot for skaters and counterculture groups. 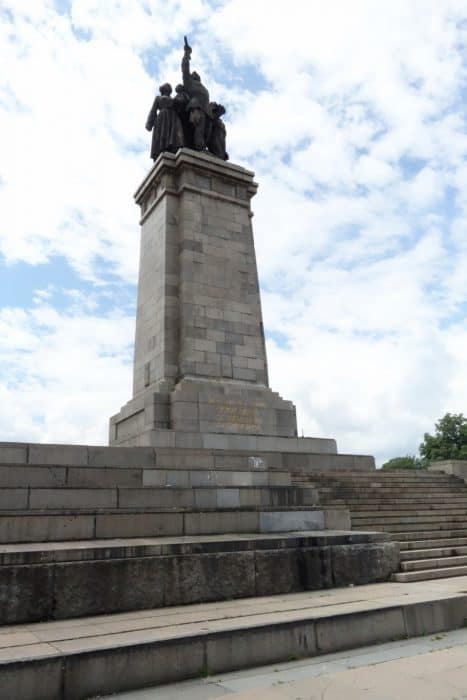 Now if that isn’t enough for those of you interested in the Communist history of this region then there is the Museum of Socialist Art. Situated on the outskirts of the city this museum houses many of the statues and paintings that once adorned the city, including the iconic star from the top of the Bulgarian Communist Party Headquarters. There are also many, many Lenin heads, busts and statues! 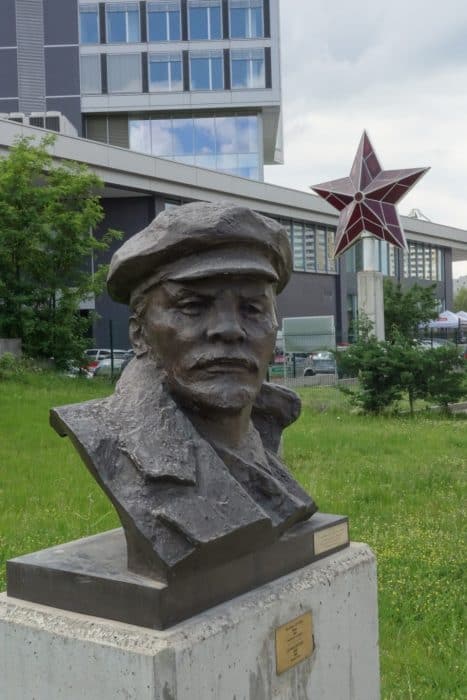 The iconic cathedral stands proud in the centre of the city, the huge church is one of the symbols of Sofia and a real icon of the country. One of the largest Eastern Orthodox cathedrals in the world and the second largest on the Balkan peninsula (after St. Sava in Belgrade, but this is nicer!!) 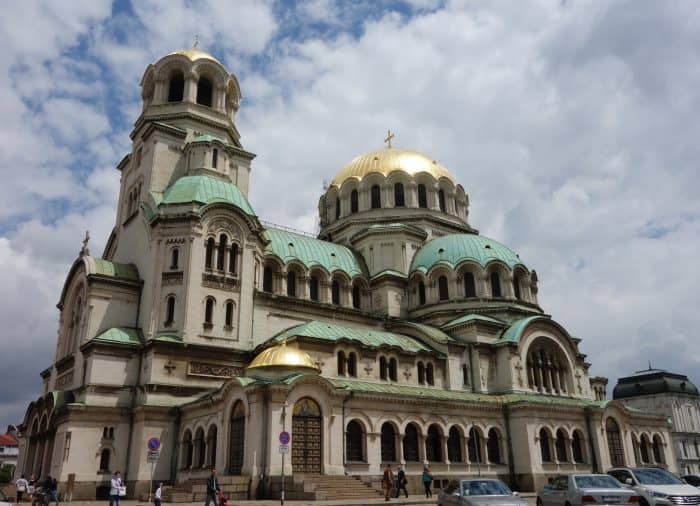 The Cathedral began construction in 1882 and was completed in 1912 and is one of the most beautiful churches both inside and out in a land scattered with so many wonderful examples!

Visit the many other stunning churches such as Saint Nikolas, Sveti Georgi and St. Sofia

Yet more churches! When heading to Eastern Europe you might just have to get used to visiting your fair share of them! Even as atheists we have to admit that their sheer beauty and the power they have over the faithful attendees is something we find fascinating. 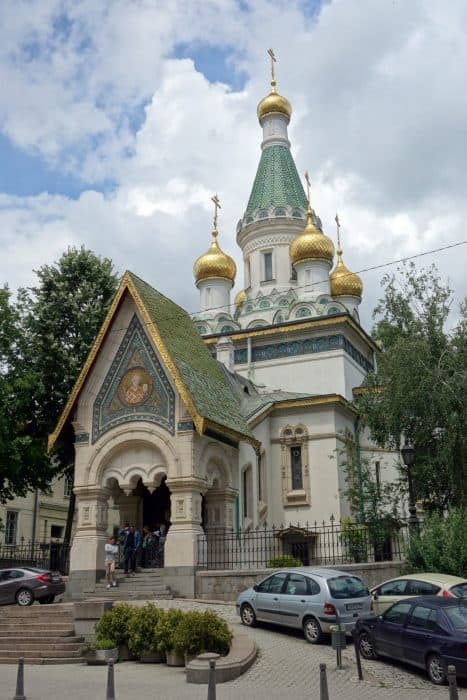 With such stunning examples on display is is easy to see why people are quite often brought to their knees in these places. Walls painted on every available surface with detailed and colourful frescos dating back centuries, shimmering onion domes and raw emotion on display. Touring the city’s several churches will leave you awe inspired. 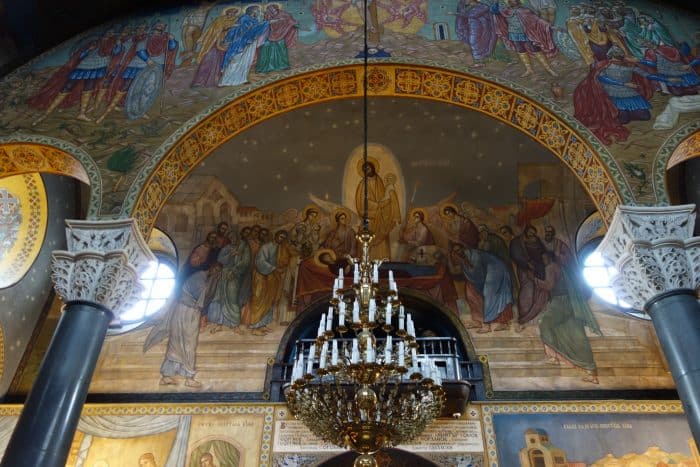 Витошка is the main street through the centre of modern Sofia. Usually I don’t include commercial areas in my posts but what I love however is how these “normal” places challenge the stereotypes many people have that make them fear Eastern Europe. Seeing such a bustling street full of shops, cafes, fountains and people just enjoying a day out with their friends, families and partners. Sofia is one of those cities with everything, with the history, unique culture and outdoor activites but at the same time it is modern and so liveable too. Vitosha Boulevard brings all that together with a collection of high profiles shops as well as a collection of notable buildings such as the National Palace of Culture and The Palace of the Courts. It also has a really wonderful 1930’s style with a beautiful view of the mountain that shares the same down the street. 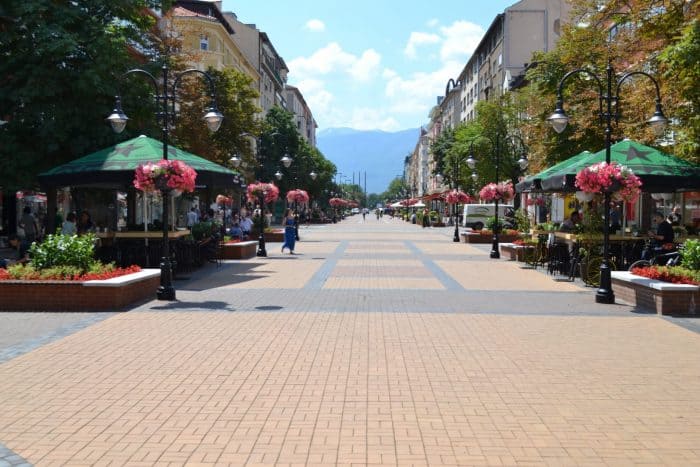 The Ivan Vazov National Theatre is a rather striking building, founded in 1904 this bright red fronted icon of the city is a truly remarkable piece of architecture. The theatre is one of the oldest and most important in Bulgaria and one of the most beautiful buildings too, that would be why it has appeared on the reverse of the 50 Lev banknote! 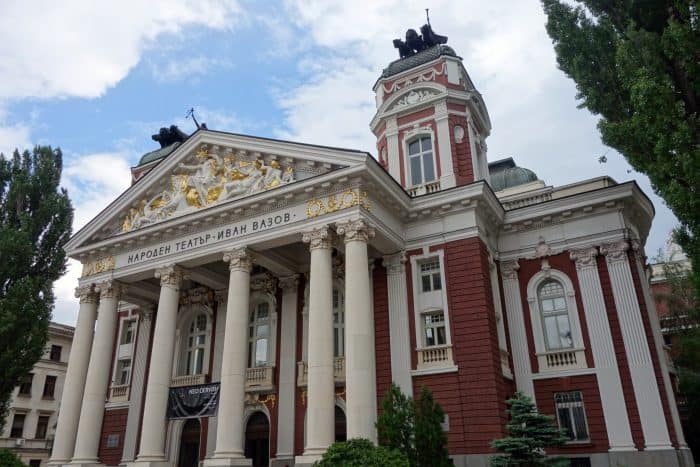 Facing the City Garden, Sofia’s oldest and most central park in the capital, it is wonderfully placed too within this peaceful leafy park. The park was first built during the final rule of the Ottomans in Bulgaria in 1872 but has since gone through many eras and reorganisations. The most significant as the location of the now demolished Georgi Dimitrov Mausoleum. 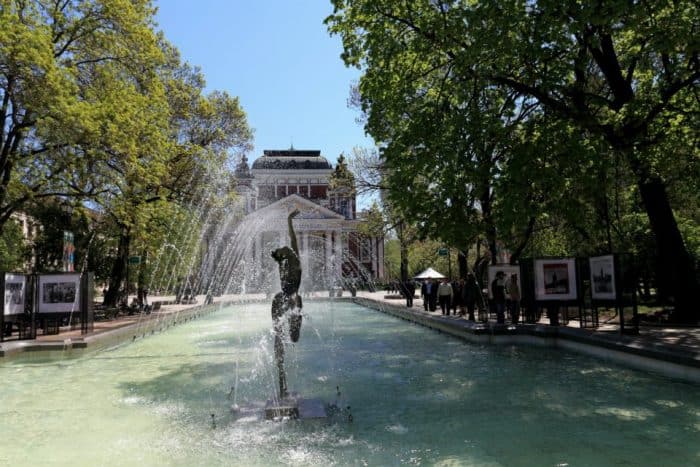 Have some adventures outside of the city!

Despite how big Bulgaria looks on the map its actually pretty small!! From Sofia you can explore many other of the countries offerings including the magnificent Rila Monastery and the stunning mountain range that surrounds it. You can also, if you have the transport head to the surreal Buzludzha monument, a derelict spaceship like former Communist headquarters. Also don’t forget the stunning Skipka monument and church! 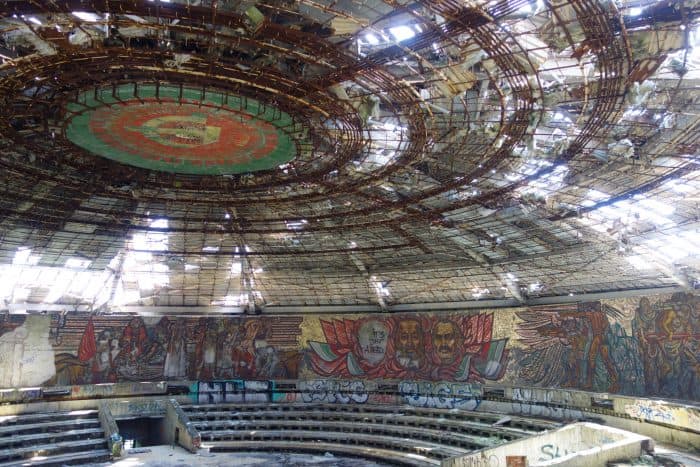 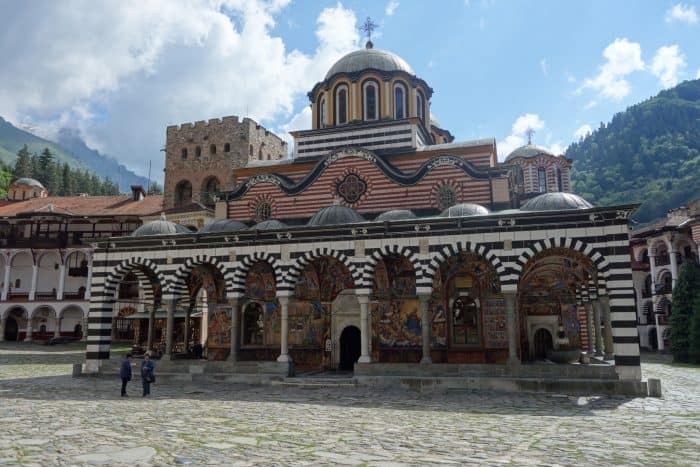 If you are looking for a great boutique but reasonably priced hotel in Sofia then look no further than “Pop Bogomil”. This chic and modern abode is in a quiet neighbourhood and offers a wonderful cozy and comfortable place to stay in a historic and atmospheric old building. 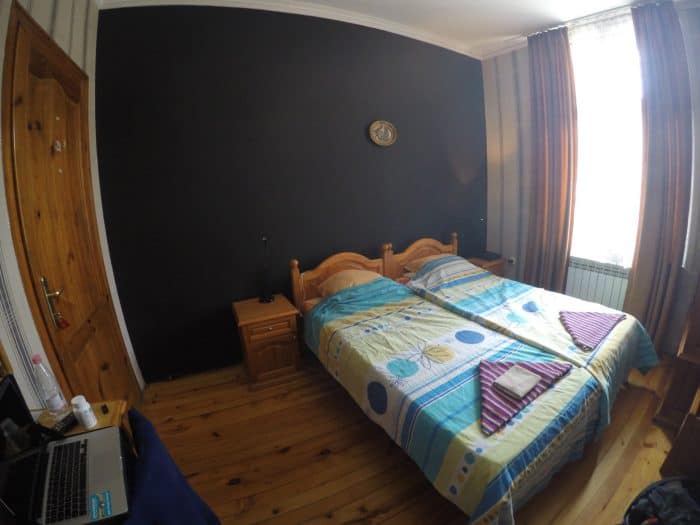 By far one of the greatest hostels we have ever stayed in is Moreto and Cafetto, their website describes it as “more than just a place to sleep” and boy does it live up to that. Here we found not only a comfortable and homely place to base ourselves but a hostel filled with great people who became friends, both staff and fellow travellers. In a leafy suburb just a 15min walk from the centre this wonderful place offers everything you could every want from a hostel, including self organised “tour”…which is basically a group of us piling into one of the owners cars for an improvised adventure to remember exploring this beautiful country!

Feeling at home in Sofia

After a rocky start we ended up falling in love with Sofia and Bulgaria as a whole too, even considering it to be a place we would love to live one day. The openness of the people we met, the diversity of culture on offer along with the historic feel and modern vibe made this a wonderful place to be. We also met up with some of our favourite bloggers over at TravellingBuzz who took us out for an amazing traditional meal and some Bulgarian beers! 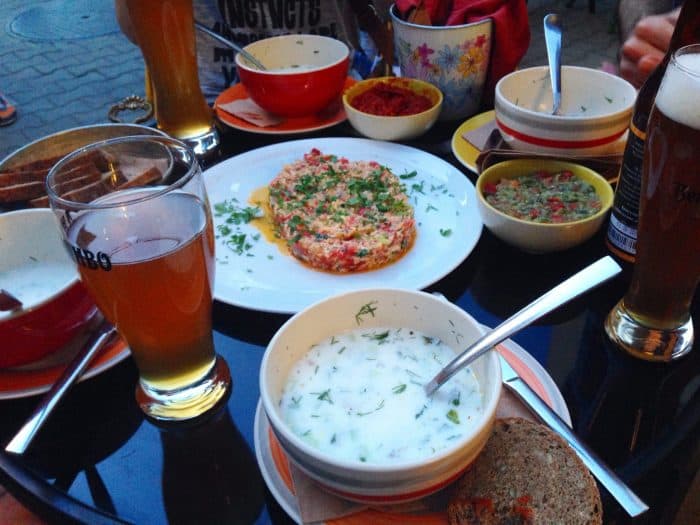 We originally intended on only spending 2 or 3 days in the city but after extending our stay again and again spent around a week here exploring not only Sofia but having some amazing adventures in wider Bulgaria itself! There are many places we visit and absolutely loved, Albania as a prime example, but not so many where you really feel you could and would happily live, but in Sofia and Bulgaria that is exactly what we discovered! 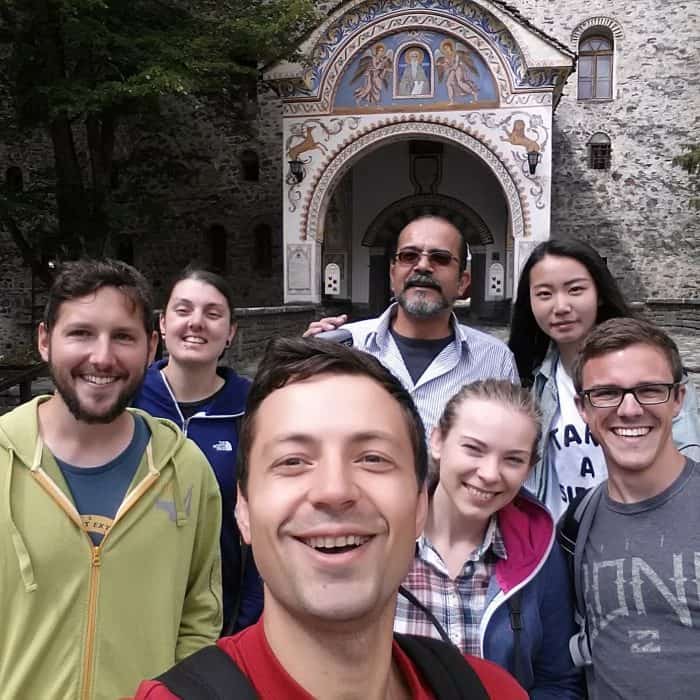 Have you every visited a city where you just felt so at home and what are your tips for Sofia?

Check out our adventures with our backpacks

I stayed in Sofia not long time but I liked the city. Too bad that I missed the Free Green Walking tour, I would really had enjoyed that! Did you visit the amazing frescoes of Boyana church?

Yeah we really loved Sofia, so much variety of things to do and the walking tour was really fun. We went inside but you can’t take photos as it is protected.

Interesting how you note the cover up of the past.

In some cities this is evident. In MANY cities 😉 But then others – usually Communist nations, current day, like Vietnam – are propaganda machines. I enjoy seeing contrast between the different countries and their acceptance or rejection of the past.

Yes. It’s understandable I guess and interesting to see how different each country deals with their history. Thanks.