When most people think of Australia there are two very distinctive images that come to mind, the beach and the outback!! One is our typical image of those that live along the coast, the laid back surfer lifestyle and easy going ways. The other is of a barren orange landscape where not many people live and those who do are pretty much Mick Dundee!! What many people don’t realise is the sheer diversity in both landscape, people and lifestyle that Australia offers. There is much more to it than varying colours of sand and the opera house! Many don’t realise the mountain ranges that cover most of the inner Eastern side of the country, the great dividing range that spans from Victoria all the way up to Queensland and even includes snow covered peaks! One of the highlights of this range and also one of the easiest to visit is the beautiful Grampians National Park, around 3 hours from Melbourne! We headed up on the Go West Tours Grampians tour to see the best it has to offer!

Stopping off at the historic Eureka Stockage in Ballarat

On the way up to the Grampians from Melbourne we stop around half way at the small city of Ballarat. The city is one of the famous boom towns from the Victorian Gold Rush that brought so many people to this area in the 1800s and also brought with in much prosperity and as a result wonderful architecture across the state. This was a nice additional stop on the Grampians tour to see this history.

However the gold rush also brought with it many problems as well as the obvious benefits. Being a colony of England at the time the wealth generated in Australia was expected to be both taken back to England and also used to develop the colony. As a result their were heavy taxations and expensive licences put in plane for everyday miners which effectively crippled their hopes of getting rich from their mining efforts and funnelled the profits to those higher up the food chain. 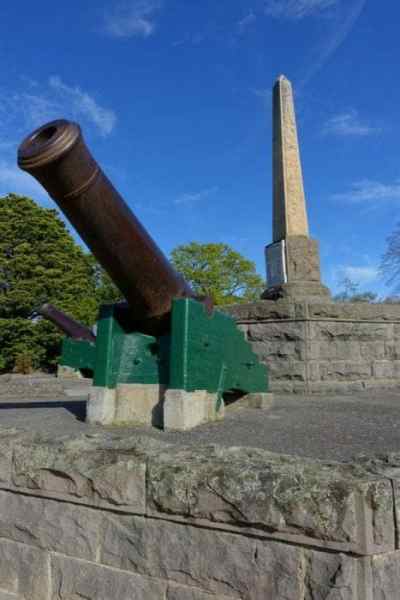 Hiking the Wonderland Turntable into the spectacular Grand Canyon

After a quick stop at the lovely Silverband falls on the way we eventually made it to the Wonderland Turntable. From here on in it would be a short but steep hike through this magnificent section of the Grampians National Park. Here you can get a real appreciation of the landscape up close whilst walking through the towering valley cut into the rock by nature. This was such a cool stop on the Grampians tour to really get up close to the landscape! 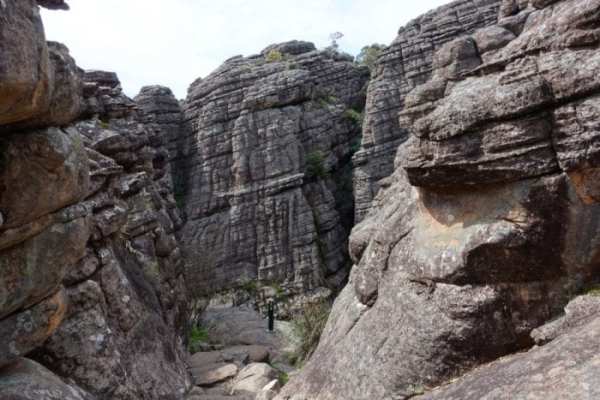 The shapes, contours and patterns naturally occurring over millions of years have left a stunning work of art. The sheer hardness of the terrain also strikes you, the Australian weather beating down on this dry, hot and scorched place. But that doesn’t mean life doesn’t exist here, quite the opposite! On our walk through this fascinating place we spot many amazing examples of the unique wildlife of this country and its challenging terrain. 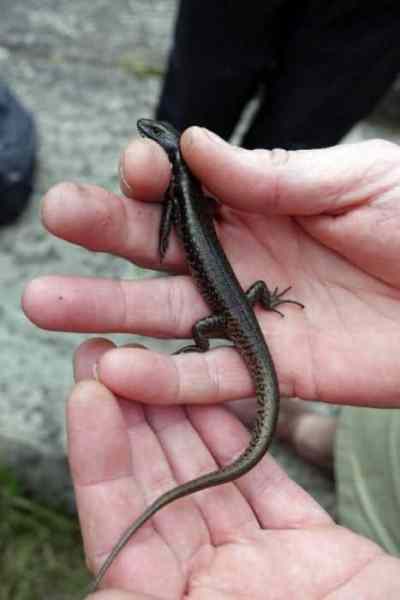 Up at the top we are treated to a wonderful panoramic view over the amazing landscape that we will shortly be exploring further on the Grampians tour! 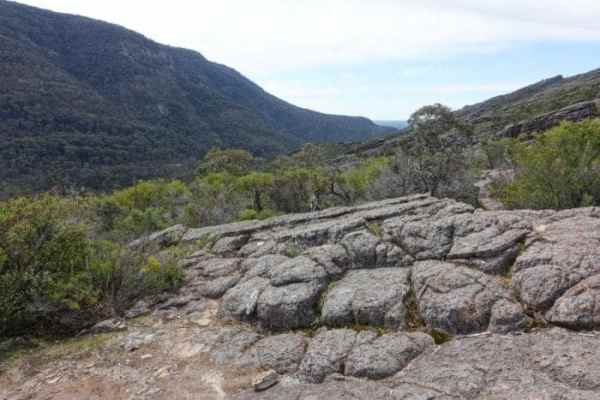 Winding our way through the bushland and mountains of the Grampians National Park it was time for one of the real highlights of the day and the Grampians tour, the iconic MacKenzie Falls. Being one of the largest and most spectacular waterfalls in Victoria we eagerly awaited seeing it in person. As we approached the steep descent to its base we could hear the roar of the mighty waterfall, one that flows throughout the years, which is not actually all that common in this region given the lack of consistent water or melting snow caps. 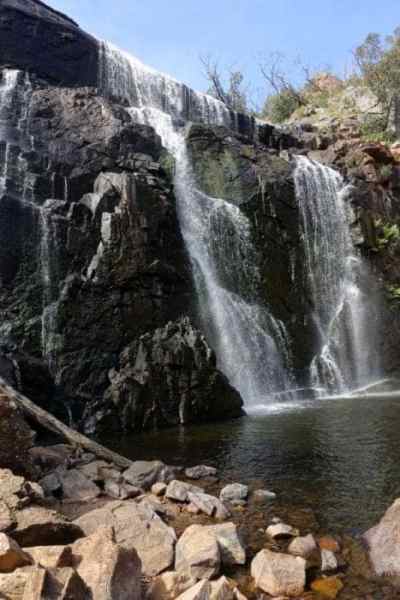 The cascading falls are a stunning natural sight, the spraying white water contrasting sharply with the dark weather rock it flows down. The fierceness with which it falls sends a shimmering rainbow into the sky as the spray offers refreshment before the climb back out of the canyon! 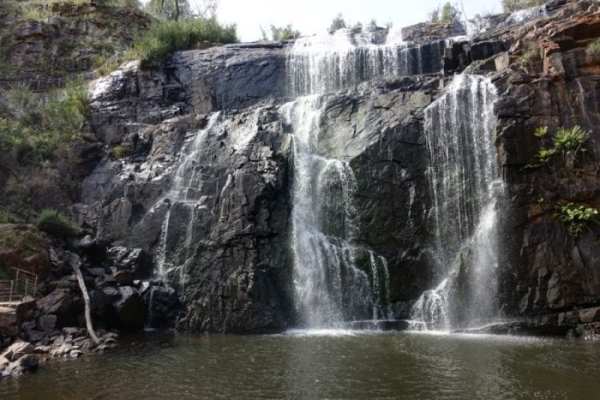 Around the sight of the MacKenzie Falls there is abundant wildlife that make their home in the thick bushland. We were lucky enough to see a cute black wallaby who didn’t at all seem that shy in introducing himself to us! We have seen quite a few kangaroos at this point after being in Australia for a few months, but quiet often the wild ones are just too timid to get close enough to have a real encounter with. So for us this was a real special moment to interact, in a respectful way of course, with the local wildlife. 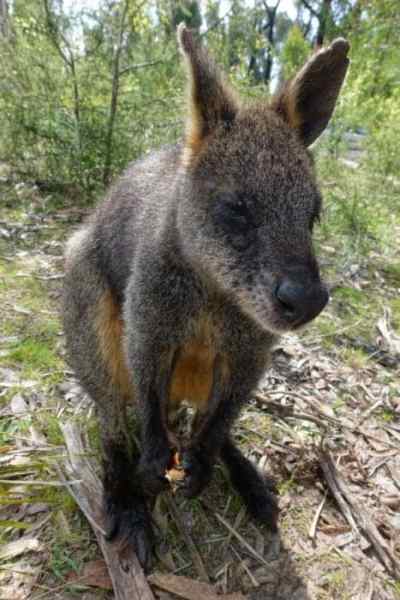 Taking in the views from the magnificent Reeds Lookout

The next port of call on our adventure in this beautiful landscape was the Reeds Lookout. For me this was the real highlight of theGrampians tour and something that really caught my imagination. The stunning vista seems to endlessly spread out over a landscape almost too stunning for words. 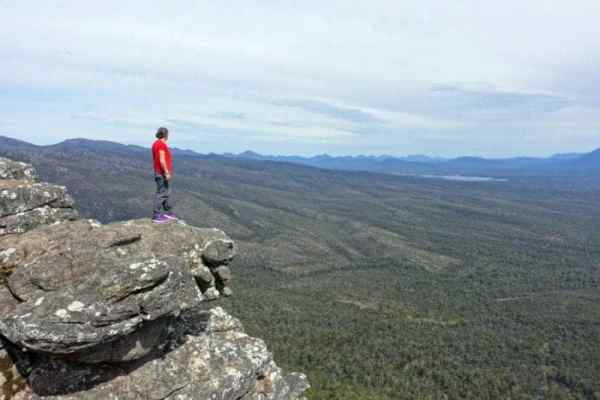 The rocky outcrops jut out enough to create an immaculately sculptured focal point in the foreground of this boundless perspective. The characteristic blue hue, for which the similar Blue Mountains over in New South Wales, are named after rises from the forests of Eucalyptus that sprawl for miles below us. 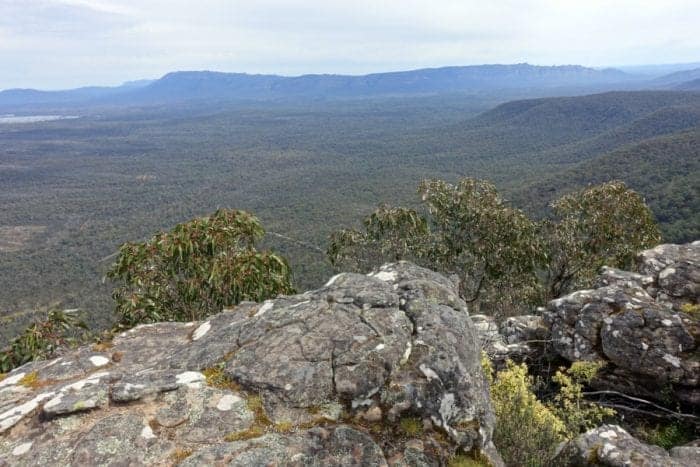 Up here it’s easy to take in the vast and very uniquely Australian landscape, the shades and colours that characterise the mountain ranges of this beautiful country and the distinctive plants and trees that cover it. The mountain tops that line the horizon in the very distance add to that layering and depth in the landscape that you can really only take in from these magnificent viewpoints. 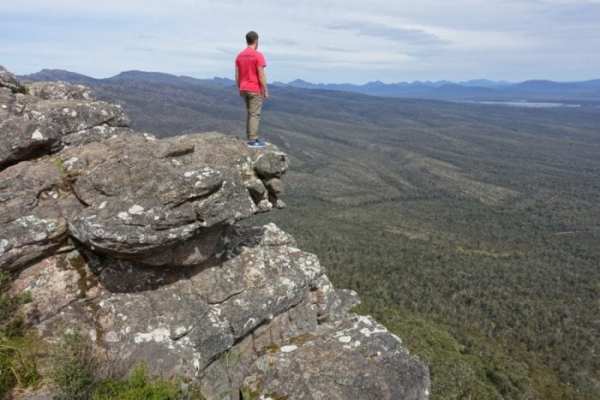 The panoramic vista of the Boroka Lookout

The beauty of this sandstone mountain range continues at possibly its most famous lookout point, Boroka. Undoubtedly one of the most scenic spots in the park we were awe struck when we ventured out to peer over the edge of the lookout. From up here you get a real sense of the scale of the area with boundless panoramic views over the town of Halls gaps,  the beautiful Lake Bellfield and incredible Mt William Range. Now is the time to take in the astonishing scene in front of you before returning to the town below to finish our Grampians tour. 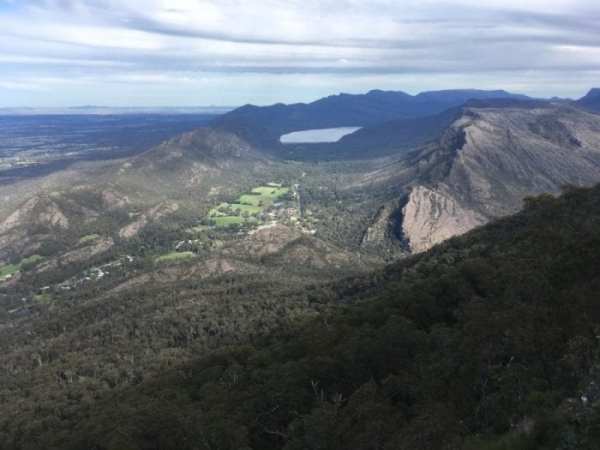 Saying G’Day to the wild Kangaroos

Now it was time to head back down to Halls Gap, the main town in the Grampians to meet some of the locals… wildlife that is! As we mentioned above we’ve seen quite a few wild kangaroos during our time in Australia but it has always been a frustrating mission to get close enough to photograph them without scaring them. 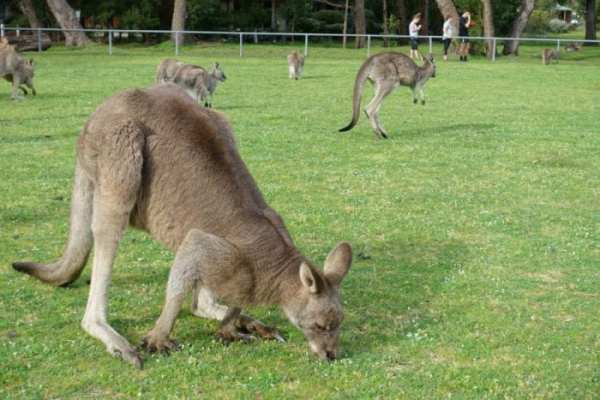 It is so beautiful to be able to see them in the wild, roaming free in their natural environment but also so hard to capture. We didn’t want to taint the experience by seeing them in captivity, especially when there is no real need for this as they are so abundant and don’t need protection as animals such as the Koala do. 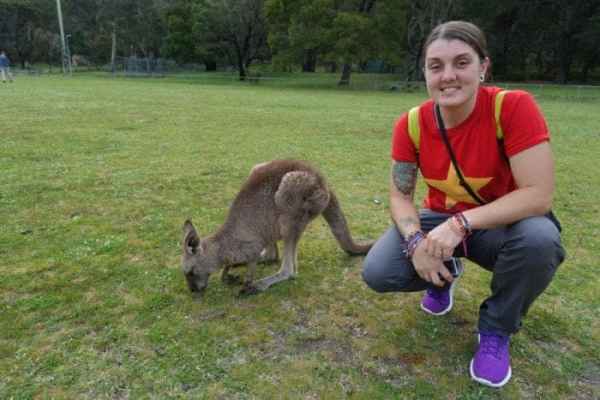 So hearing about the kangaroos that call the Halls Gap Oval home we were thrilled to be able to one again see these strange, beautiful and unique creatures, the symbol of Australia, a little closer up! With so many people visiting Halls Gap these guys don’t really bat an eyelid to sharing the oval with tourists, cricketers or footballers and often come over to attempt to steal an inattentive picnickers lunch! Picture the scene, People playing Aussie rules football, a family having a game of cricket, BBQ’s on the go and wild Kangaroos… It doesn’t get any more Australian than that!!! 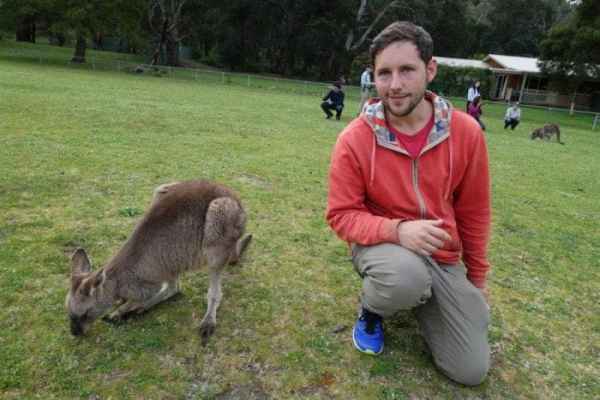 About Go West Tours and their Grampians tour:

We headed up to the Grampians on a day tour with “Go West Tours”. These guys make it really easy to get out of the city and up into this wonderful area of Victoria. Travelling around such a big country as backpackers it is hard to see everything without a car, so for those that don’t have that option they really do make these places accessible. Being only 3 hours from Melbourne it is a perfect day trip that really allows you to see another side to this great state. They also include stops for morning tea and lunch which are included in the price!

They provide large comfortable vans complete with onboard WIFI, so you can get that selfie with a kangaroo on “the gram” straight away. Our guide, John, was a really lovely guy who really taught us quite a lot about Melbourne and Victoria and was a good laugh too! We usually don’t do too many tours but the Grampians tour was a really useful way for us to take in the highlights of the Grampians and save our future adventures up here for climbing! It’s also something we recommended on our Melbourne 5 Day Itinerary. 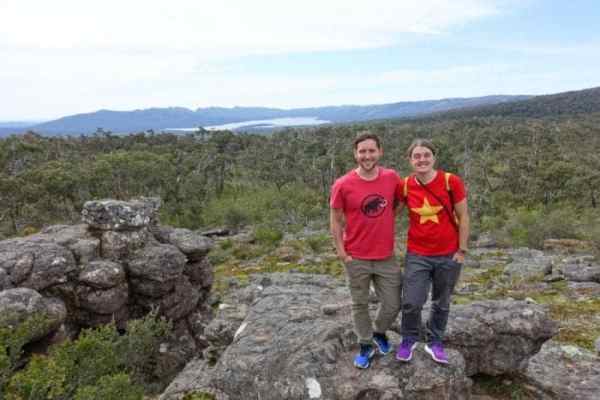 We returned later during our time in Melbourne to do some Bouldering, keep an eye out for that adventure! 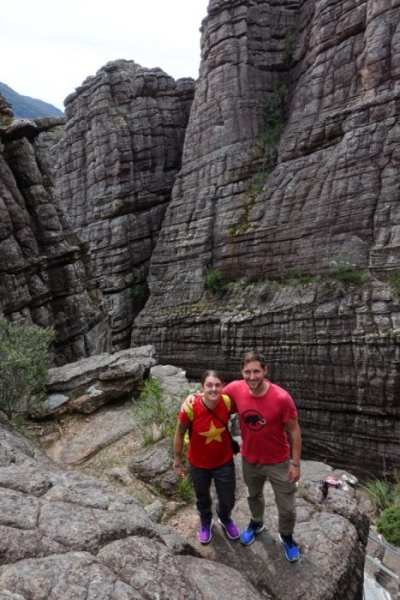 Have you visited the amazing Grampians National Park?

Disclaimer: This post was sponsored by Go West Tours. As always, all opinions are our own!