When we set off riding from Saigon to Hanoi (and on to Sapa) on motorbikes there was a few obscure stops along the way we wanted to make. Having your own transport gives you the complete freedom to stop off at the places others just breeze passed in their uncomfortable sleeper buses. Ganh Da Dia is one of those places you hear whispers of along the way, almost like a legendary myth, much like the more well known version in Ireland! Even many Vietnamese people along the way had no clue what we were talking about! But having completely missed it on our way up to Quy Nhon the guys in our hostel gave us the most amazing instructions to explore the Giants Causeway of Vietnam, ones which would take us on an adventure across a rather unstable looking wooden bridge and through some wonderful villages, to discover that the legend is in fact real!

What is Ganh Da Dia?

Just like the Giant’s Causeway in Northern Ireland and a handful of other spots in random locations around the world, Ganh Da Dia is the result of a perfect storm of natural events which created this beautiful phenomenon. The basalt columns came about due to volcanic activity in the region millions of years ago, as the flow of lava reached the cooling waters of the sea it solidified and cracked into these rare polygonal formations! Over time many have been worn down by the beating of the sea and also twisted and deformed by the seismic activity after their formation, creating this beautiful and strange wonder we see today! The Giants Causeway of Vietnam! 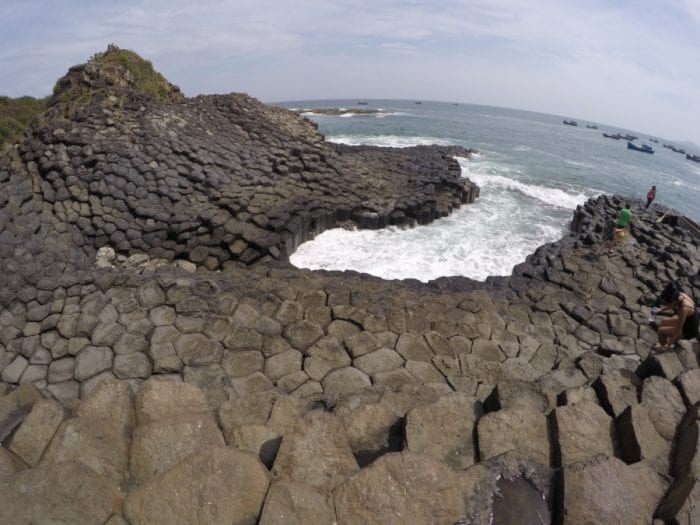 An adventure motorbiking across wooden bridges and through tiny villages

One of the unexpected highlights of the day wasn’t actually Ganh Da Dia itself! Of course, that was amazing but we only really set out to see that when we made these plans. But speaking to the members of staff at our hostel (John and Paul hostel, really great place) we were able to experience so much more, and save time too! 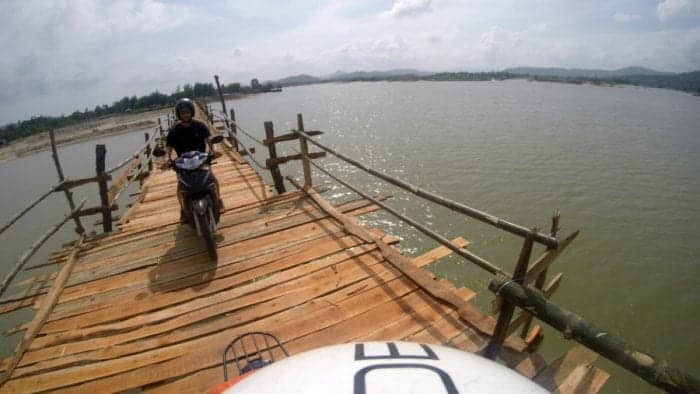 When we looked on the map and decided to cut back down south to see this amazing sight we had missed on the way up it didn’t look at all that far away. It seemed totally doable in a day, less than 40 miles away, we had blitzed over 100 miles in a day on the bikes easy with all our baggage! That was until the phone calculated the route, this was now taking us at least 50 miles further than we expected and throwing this day trip into some doubt! 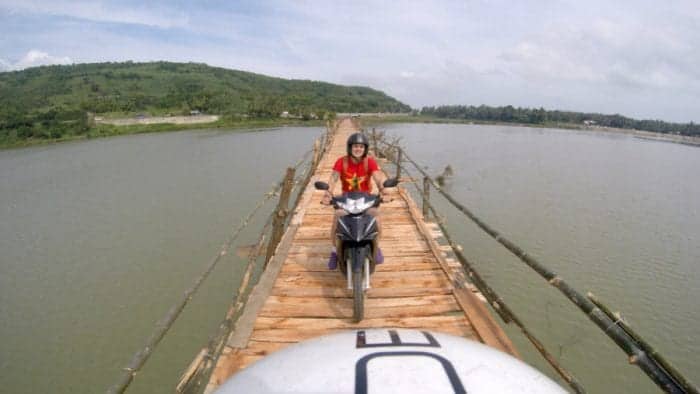 The guys at the hostel told us of this wooden bridge called “Cầu gỗ Ô Cọp” that wasn’t on any maps but was on the satellite view on google earth. I actually remembered us riding past the bridge on our way to Quy Nhon and thinking it was a pier for the fishermen! Paying the small toll we finally tentatively made our way across the rickety bridge, people were still actually knocking nails into some of the side barriers and planks as we crossed at a snails pace! Despite being mildly afraid of toppling off the side it was such a fun and unique experience that tested our handling of the bikes for sure! 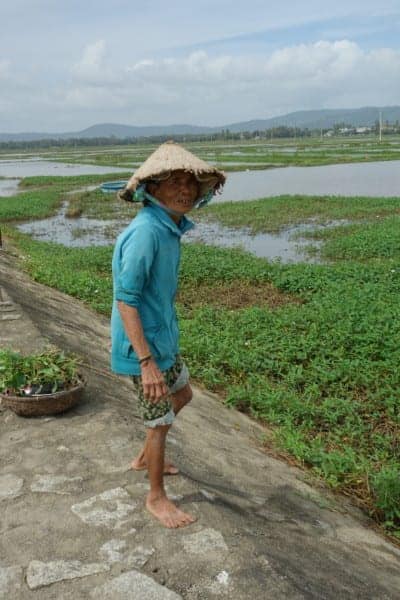 After making it back onto terra firma it was time for another fun route, following dirt paths and tracks as they wound their way through rice paddies packed with old women carrying out this backbreaking work. Then through the heart of tiny villages where rice and corn filled almost every roadside being dried out after the harvest. People here would all shout hello, waving frantically and children running alongside us! They clearly don’t get many tourist around here and almost made you feel like a celebrity! But seeing their wooden houses, the farms and simple way of life was a fascinating and humbling experience to add to what was an amazing day! 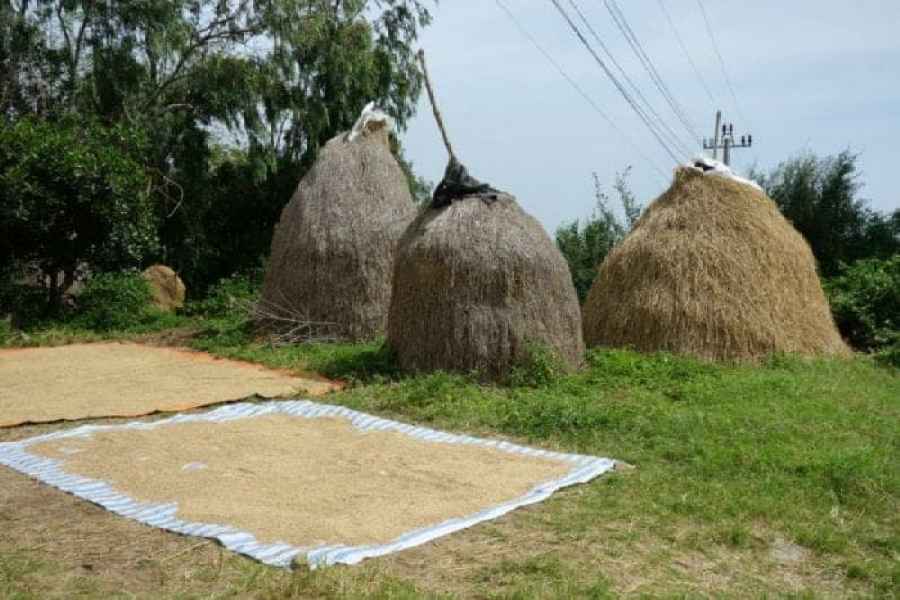 Just like Northern Ireland…only the weather was great and we were alone!

The formations at Ganh Da Dia are smaller in surface area than that of Northern Ireland, but are just as dramatic and in many ways so much more satisfying to visit. Now I am not saying it always rains in Ireland, but it didn’t become the Emerald Isle for nothing! The weather in Vietnam can range from extremes, as we found out in the highlands and the very north of the country. 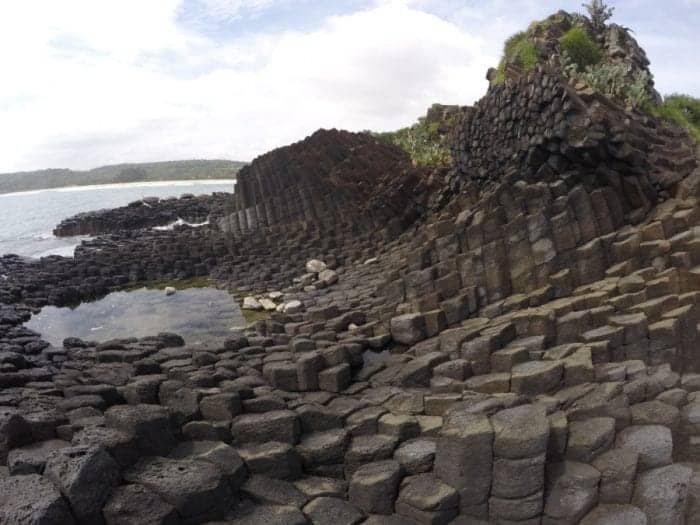 But generally speaking the costal region is blessed with hot sunny days the whole year round. When we visited The Giant’s Causeway in Northern Ireland is was wet and windy, of course, that all adds to the power and drama of the place, but honestly, I would rather be warm! When the sun illuminates the perfect blue waters and the spray off the rocks refreshes you rather than chilling you to the bone the whole experience is just than much more pleasant!! 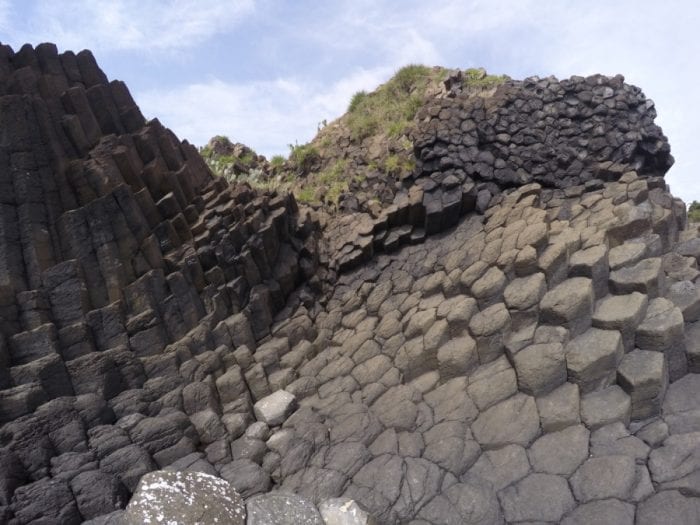 Then there is also the crowds! The Giant’s Causeway is Northern Ireland’s most well known sight, many make the trip over to this tiny country just for this reason alone! Tours come flooding in at all hours in the day, from morning excursions from Belfast to afternoon day trippers from over in Dublin the flow feels endless. 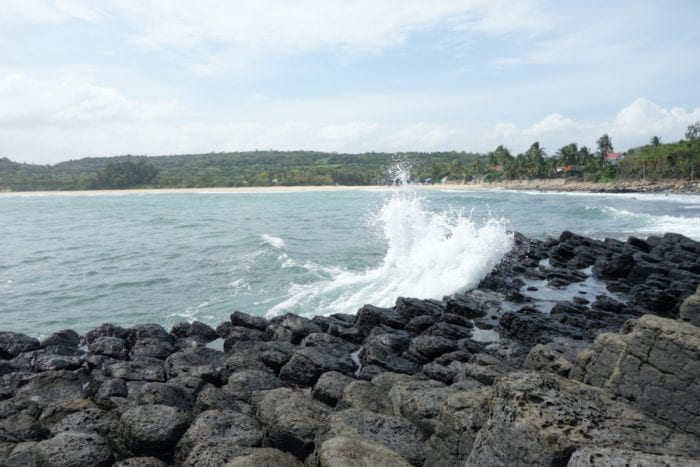 To have this wonderful spot to yourself requires staying nearby, renting your own car (quite expensive in the uk) and getting up for sunrise. Even then there might be others who hatched the same plan! But here Genh Da Dia is firmly off the beaten track and it is common to have the place entirely to yourself even in the middle of the day. When we arrived the only others there were fishermen parking their coracles on the formations! 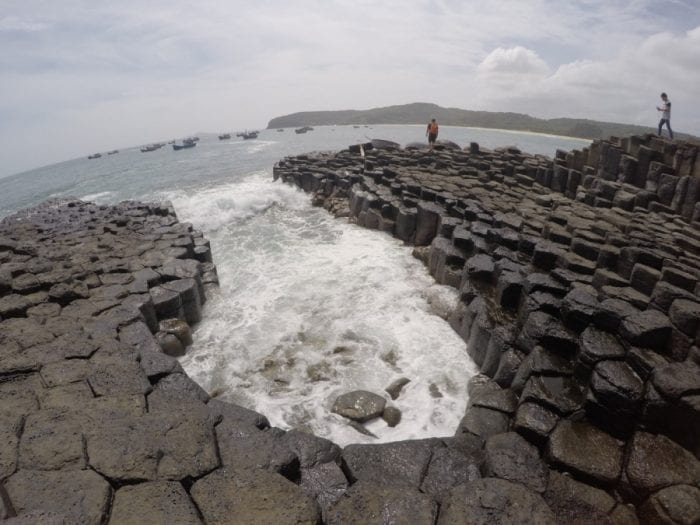 A stunning example of nature and a place to see local culture: The Giants Causeway of Vietnam

Made up over over 35,000 interlocking plates that form an undulating cliffside there is a lot more to explore than meets the eye. Each section of the unique formations offers a different view point. Climbing to the top of a stack and looking down over the dramatic scenery or scrambling down into one of the hidden crevices and staring up at this strange and wonderful place, looking in awe at the power of nature. There is something quite mesmerising just sitting back in the sun and watching the waves wash over the unbelievable beehive of rock! Literally the Giants Causeway of Vietnam! 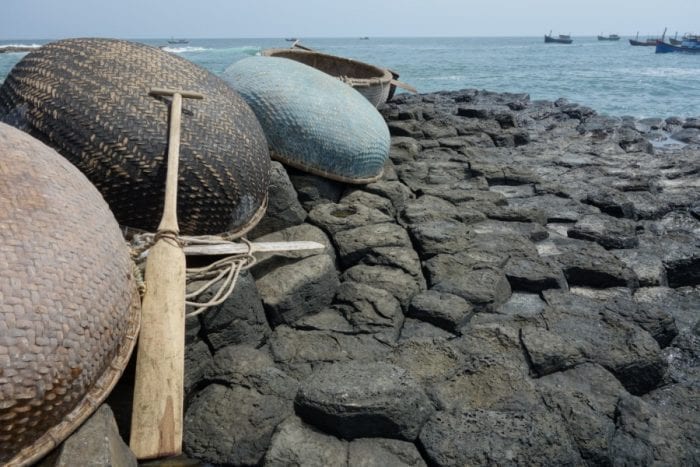 One of the things we loved here was how these formations were used by the local people, its not a designated landmark, protected area or even anything other than everyday life to the fishermen here (though it did receive National Heritage status in 1998) . The fortuitous formations have instead become a useful location from which to launch their coracles, the tiny round boats they use to row out to their much larger ships they keep moored in the ocean. Instead of being surrounded by tourists and souvenir stalls, here instead are locals going about normal life and using this wonderful place as storage for their boats! The Giants Causeway of Vietnam really has that strange combination of looking like Ireland but being typically Vietnamese! 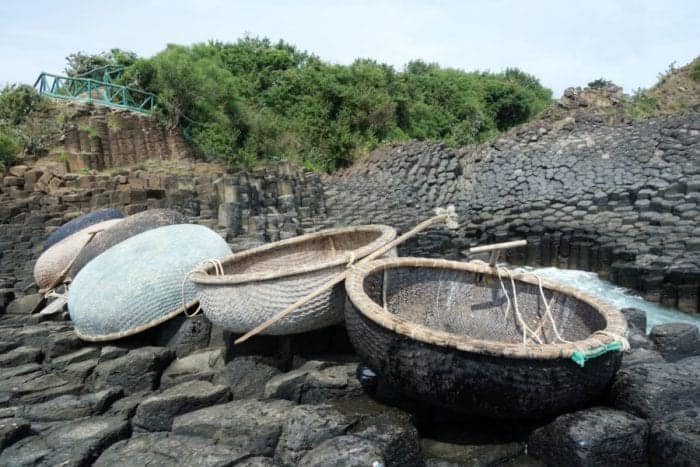 How to get to Ganh Da Dia/ How much is The Giants Causeway of Vietnam?

Tucked away off the main coastal road if you are travelling between Nha Trang and Hoi An then make sure to stop off. We were based in the city of Quy Nhon for a few days and made the 50km ride over easily in a day. If you want more time to explore the place fully then this is the best way. However the closest city is Tua Hoa, but Quy Nhon as a place does have more to offer visitors and it for us was like Nha Trang but without the tourists! 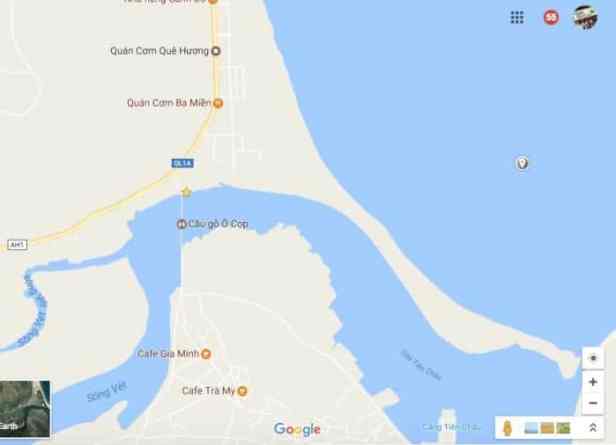 From Quy Nhon or the north:

If you try searching for driving instructions using the usual methods then you will be redirected around a very long route requiring you to go quite far out of your way to get on to the peninsular on which Ganh Da Dia sits. Online maps don’t recognise the wooden bridge (Cầu gỗ Ô Cọp)! So here it takes a bit of observational skill. Keep an eye out for the bridge after around 38 miles. From here just follow the roads towards the coast, there should be sign posts and map.me/ google maps does work here! 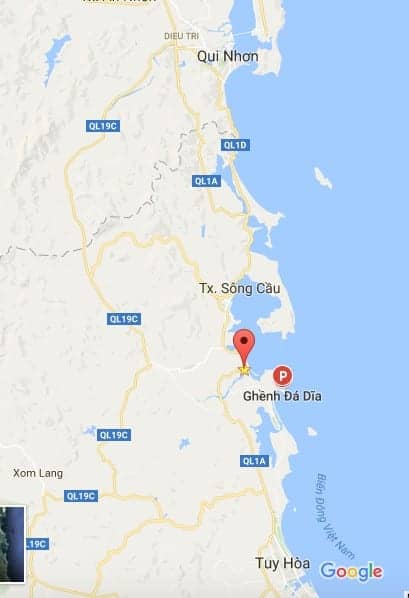 From here conventional GPS should work fine as getting on to the peninsular is on route from the main highway. However this way you will miss out on a great experience. If you are continuing North you could head back onto the highway via the wooden bridge (Cầu gỗ Ô Cọp) rather than going back over what would now be a longer route. Once off the highway there should be the usual sign posts and map.me/ google maps does work here! 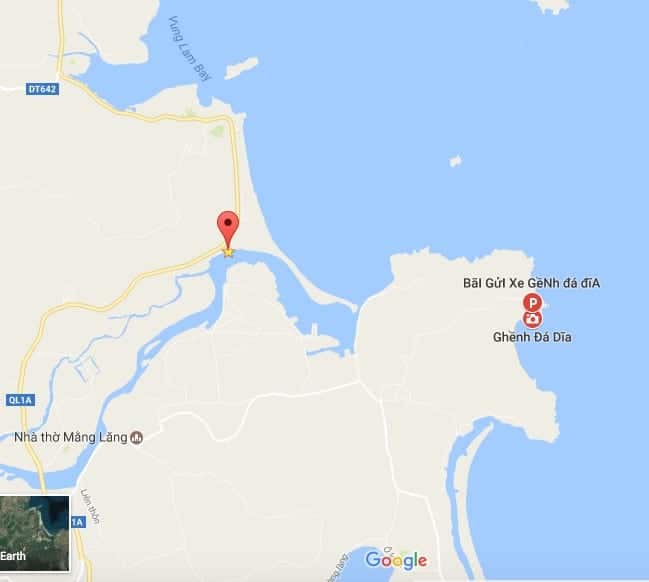 The bridge (Cầu gỗ Ô Cọp) will cost you around 20,000 to cross. I feel like we were overcharged because we were foreigners so see if you can negotiate any cheaper. But this is less than £1 so we couldn’t really be bothered!

After being free for many year the local folks have cottoned on to some well informed visitors and began charging. The rate is only 20,000 which again is less than £1. 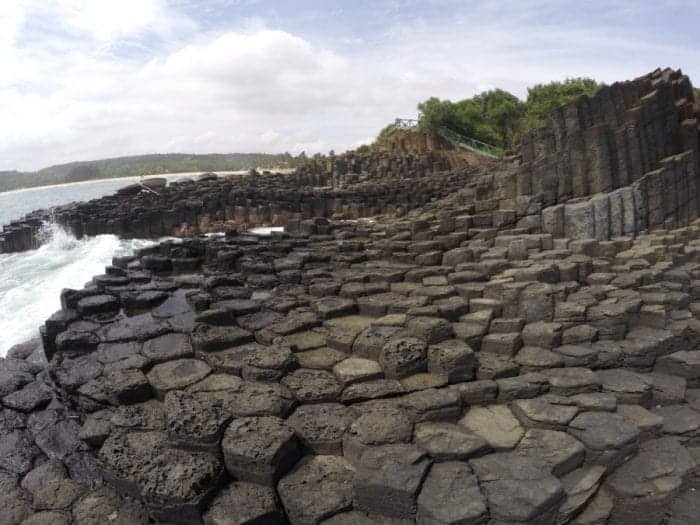 Have you ever visited one of the few areas like this around the world or Ganh Da Dia? 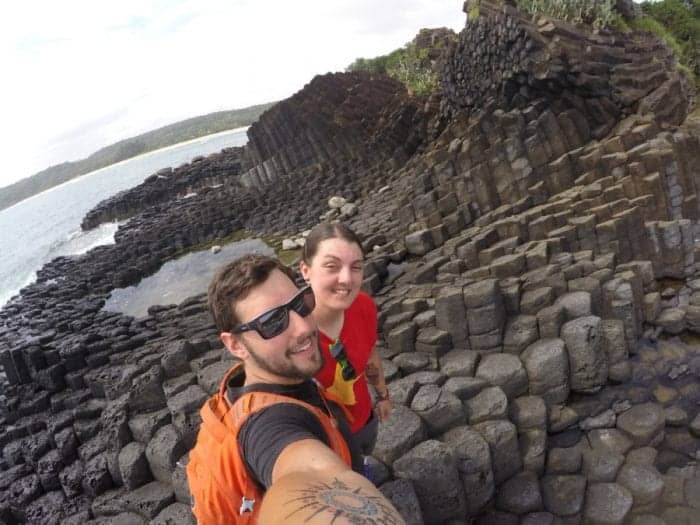 Read about our visit to the Giant’s Causeway here:

I have never heard of this, probably because we weren’t driving or scooting through Vietnam. We took the train like everyone else. I would love to go here and photograph and enjoy the heat…and riding over the wooden bridges looks like fun, too.

That is one of the real benefits of travelling via motorbike, stopping off at these little spots, really enjoyed that freedom.