Visiting Thailand is a bi-word for fun, adventure, parties, elephant visits, temples and of course amazing food. However what many don’t expect to encounter over here is the kind of unavoidable and heartbreaking WW2 sites that litter Europe like the craters left by the luftwaffe. Kanchanaburi is the location of the infamous “Bridge on the River Kwai” the sadistic Japanese railway project that cost the lives of thousands of allied prisoners of war.

A sobering visit to the war cemetery

One of the first and most important spots in the city to visit is the commonwealth war cemetery right in the middle of Kanchanaburi. I’ve visited these sombre and sobering places before, rows and rows of young lives taken away in their prime, the older I get the more heartbreaking those ages become. The Commonwealth Graves Commission is an organisation that takes care of the thousands of graves and cemeteries all over the world that contain the remains of the soldiers of the former British Commonwealth. Many come to see the Bridge on the river Kwai but in reality this is the most sobering monument to the fallen. 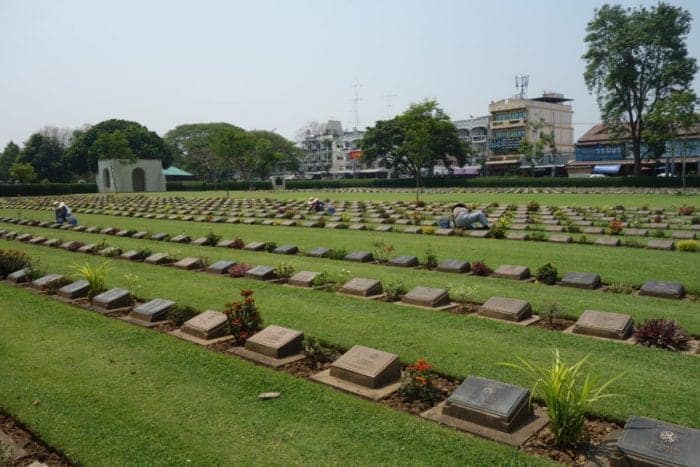 They really do an amazing job and one of the things that struck us straight away was just how well kept and beautiful this sad place was. Here lies the bodies of 6,982 mostly British, Australian and New Zealand soldiers as well as many Dutch POW’s of the estimated 12,621 Allied POWs who died during the construction of the Burmese Railway. We also found both a Hilditch and a Short too which was even more moving. 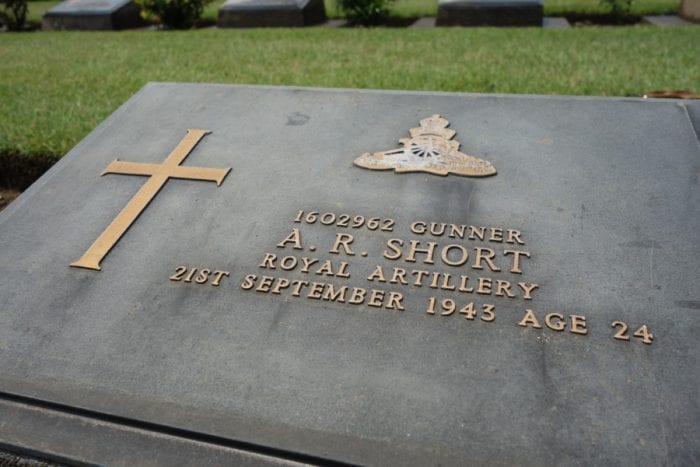 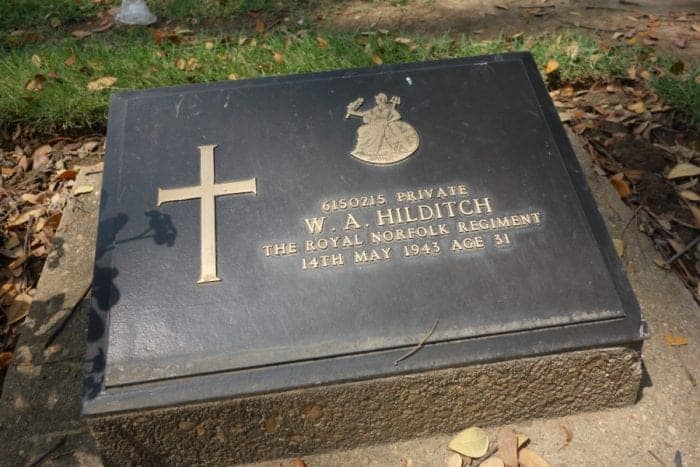 Walking across the famous “Bridge on the river Kwai”

The most famous section of the Burmese Railway the Japanese used an estimated 180,000 forced labour workers and POW’s to build is the Bridge on the River Kwai. A brutal section that crosses over this stretch of water was immortalised in the 1957 film of the same name. The railway was an ambitious project by the Japanese which was to join Bangkok to Rangoon in order to progress the Japanese march across Asia. 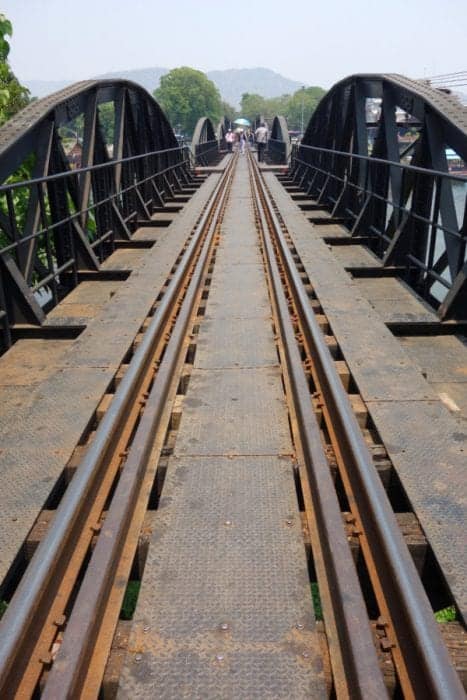 Crossing the river caused a logistical problem that required huge manpower and ultimately a huge human cost. Conditions here were incredibly poor, many POW’s suffering from malnutrition, over work, malaria, dysentery and violence. The Bridge on the river Kwai cost dearly in human lives but became a symbol of the suffering here. 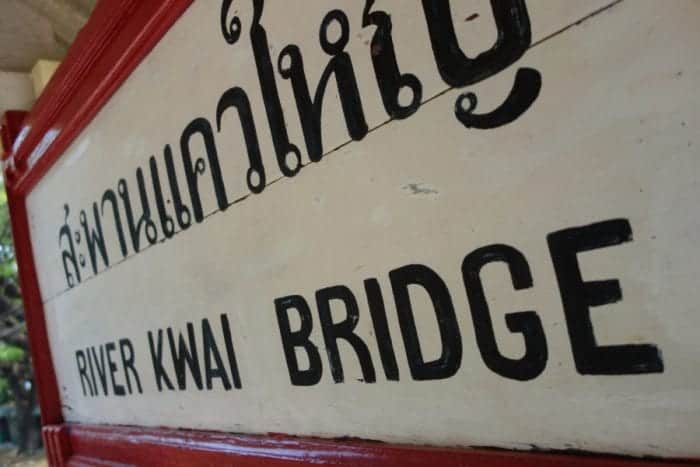 A sweltering stroll down the “Hellfire Pass”

To take in the whole context of the events during the second world war in Kanchanaburi a trip must be taken some 80km out to the scorching Tenasserim Hills and the “Hellfire Pass”. This was the most difficult and arduous section of the railway as it passed through this mountainous section between Thailand and Burma but somewhat less well known than the Bridge on the river Kwai.

A cutting needed to be made through solid rock by hand, the POW’s were made to work in shifts though the night in order to get the job done in what was an unbelievably fast time. Working by torchlight the scene was said to resemble a scene from hell as well as the unbearably hot conditions and sheer horror of the situation. Due to the difficulty of this section the pass was noted for the particularly harsh conditions up here and the number of lives lost. 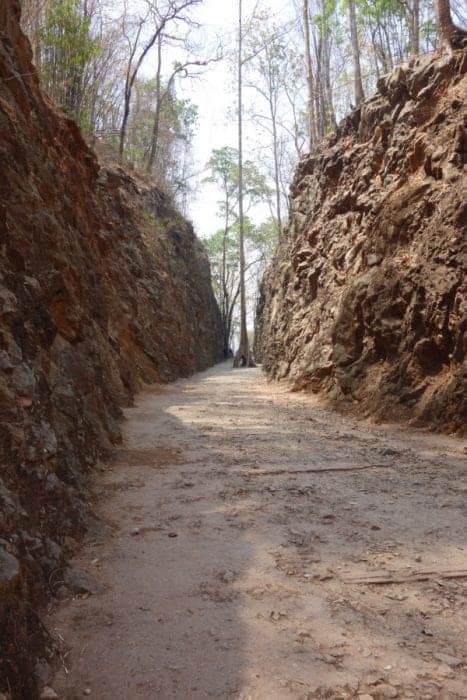 Today the area is a touching memorial to those lost, many of the tributes left by visitors really left a lump in our throats. Just walking up the steep route towards the pass was and exhausting task in the heat as really put in perspective the conditions these POW’s had to endure here. We hired a scooter and rode the way here which cost around $4 for the day. 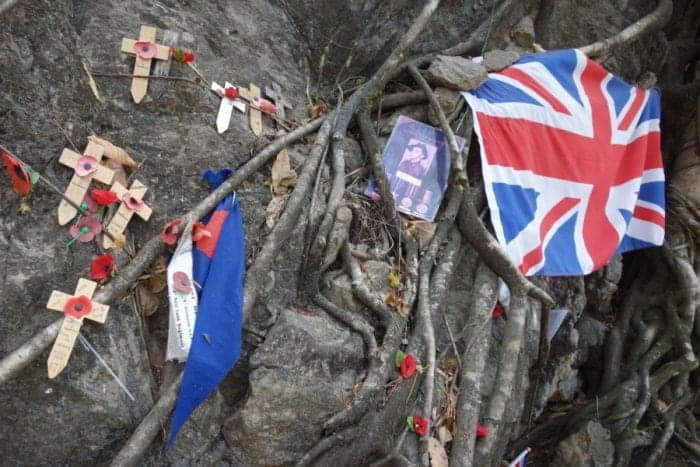 Other areas of the “Death Railway” to visit

Along the road on the way to the Hellfire pass there are many other sections of the Death Railway to visit that also provide further insights into the tough conditions the POW’s endured here. The Tham Kra Sae station is still in use today and offers a great place to see another harrowing section of the tracks. You can take the limited services out here to visit a or as we did rent a scooter and come and go at your own pace. 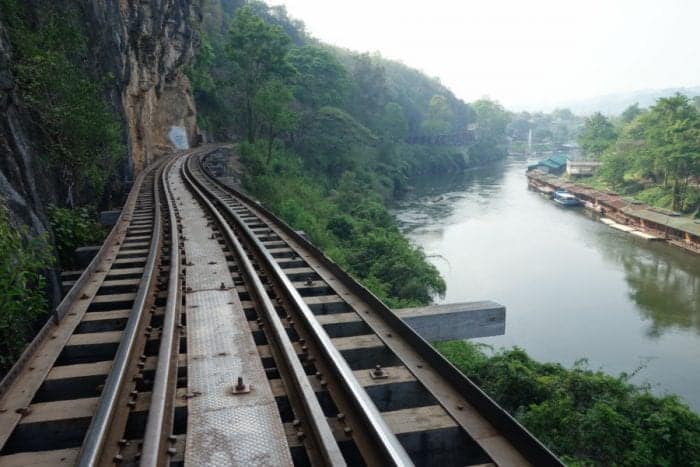 However it would be great to time your visit with a passing train rolling along the wooden bridge and the death railway. The train tracks and bridge that cling to the mountainside can be walked up and down and viewed up close. Here you really get a close look at the work these men performed and the irony of being in such a beautiful but brutal location.

Kanchanaburi is pretty close to Bangkok, we took the local slow train which took 3 hours and cost less than £2 each. There are also buses for a little bit more which are a touch quicker. Kanchanaburi is also well served from many other places in Thailand on buses and trains. We took a bus from Ayuthaya which took around 4/ 5 hours. 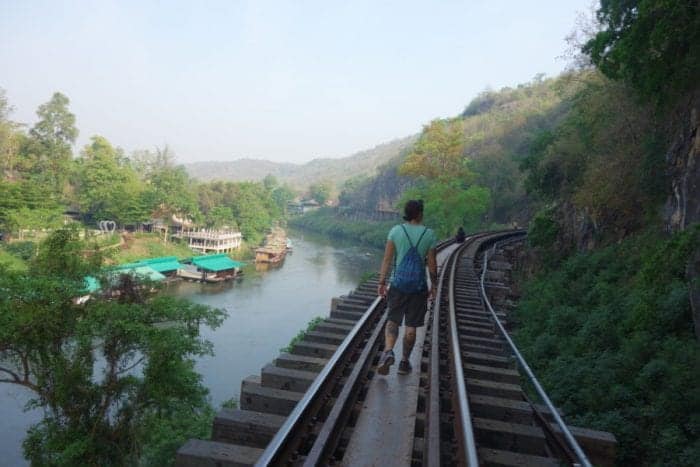 Have you visited Kanchanaburi and the Bridge on the river Kwai?

I have yet to visit the bridge but it is definitely on my list. I always find those cemeteries incredibly moving

Its moving for sure and those places are really sobering, but a must visit for sure.

I saw the movie Bridge on the River Kwai recently and after reading your post, I can connect the pictures to the scenes from the movie. I’m sure the trip was very moving. We have a lot to be thankful to be living in peaceful times.

Yes, things are not great in so many ways with unrest around the world, but compared to what my grandparents generation went through it is nothing. It was so moving and eye opening.