The largest Buddhist temple in the world, a huge monument to this religion standing mysteriously atop a hill on the outskirts of Yogyakarta. Ever since I saw images of the characteristic and unique perforated stupas around the top of this enormous temple I knew it was somewhere I just had to visit. One of the religious wonders of the world, to Buddhism what the Vatican is to Catholics, the Blue Mosque to Muslims, the Taj Mahal to Hindus and the wailing wall to the Jewish and well deserving of its UNESCO world heritage status. It ranks alongside ancient wonders such as Bagan and Angkor Wat and is was one of highlights of our time exploring Asia! Here is our amazing adventure to Borobudur Temple!

What is Borobudur Temple?

Borobudur Temple is the largest Buddhist temple in the world and is a pilgrimage site for many of the religions followers. It was built back in the 9th century. The giant pyramid like structure consists of 9 platforms. The lower six being square and containing many detailed reliefs telling the story of Buddha. The next three are circular and perhaps the most famous, containing the 72 perforated stupas, inside each one is a Buddha statue. Then the highest area is topped by a huge central dome which completes the unique design. The temple is decorated with 2,672 relief panels and 504 Buddhas in total, quite a sight to see! 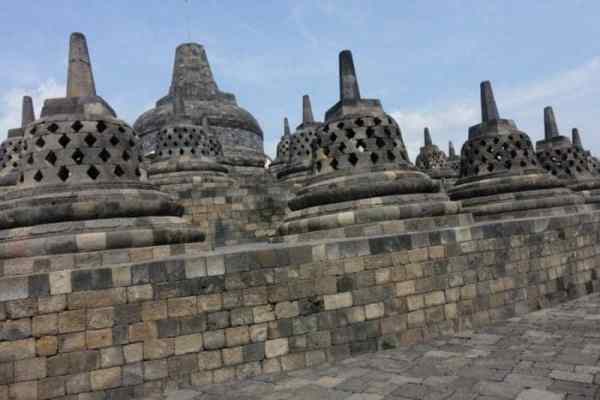 The temple itself is unique in design as it combines elements of traditional Buddhist architecture with that of indigenous Indonesian customs as well as displaying Indian influences. This makes the temple a one of a kind example of not only the blending of cultures but also of Indonesian history. 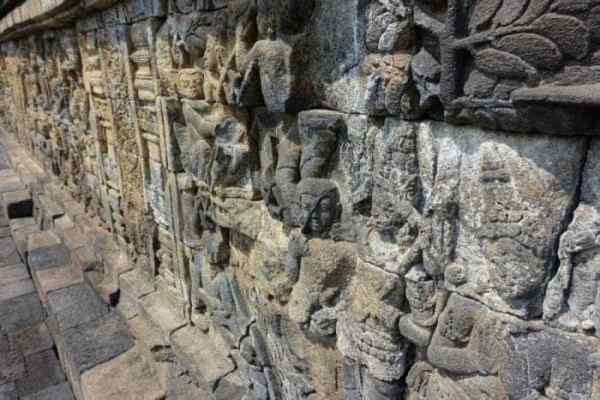 The temple was left abandoned in the 14th century with the rise of Islam in Indonesia and specifically Java (now the world’s most populous Muslim country). The temple once again gained world wide acclaim when the Brit Sir Thomas Raffles was advised of its whereabouts in 1814 by locals. Since then the temple has been restored many times, the most extensive between 1975 and 1982 when it was added as a UNESCO World Heritage Site. 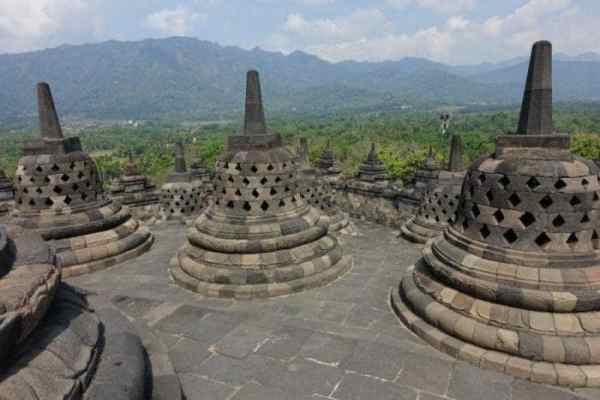 Ticking off one of our bucket list destinations in Indonesia

Looking at photos of the temple before we visited you never quite get the idea of the scale of the place. It rises out of the surrounding areas like the Pyramids of Giza, almost a surreal sight that is quite hard to take in all at once. 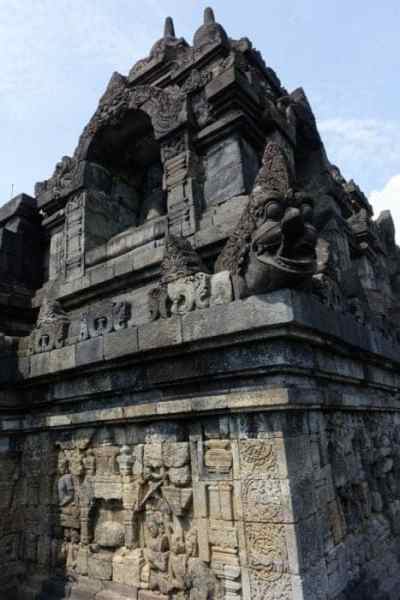 We arrived in the morning, around 9am and it was still relatively quiet and the sun was perfect. Giving out amazing light streaming across the temple in beautiful perfection and also not yet at its most overpowering. The scene was everything we had hoped for and the temple just as mesmerising as we had always imagined. 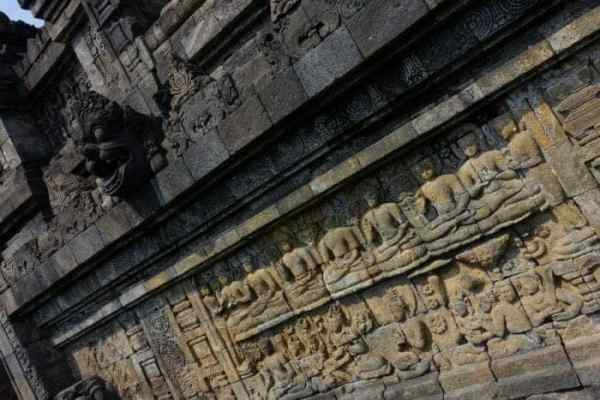 As we walked closer to the temple the details of its thousands of mosaics, carvings and reliefs came into focus. It was clear that this temple would be somewhere to get lost within, to explore for hours and every corner, crevice and cranny would reveal yet more astonishing history. The richness of the details here were beyond belief, after wandering around the crumbling remains of Angkor Wat we thought nowhere else would compare, but this was living up to all our wildest Indiana Jones fantasies and Tomb Raider images we had of South East Asia! 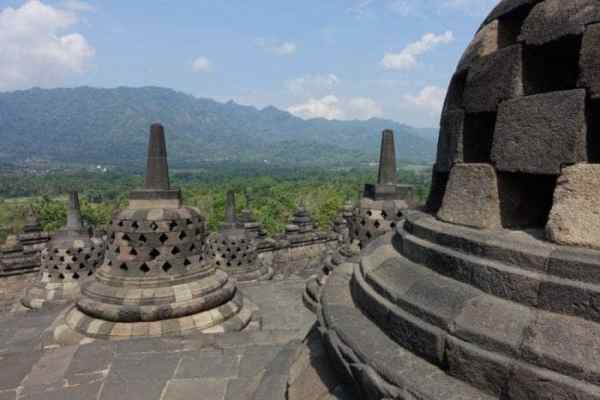 There is a specific path to be taken up through the temple, following the levels of symbolic Buddhist cosmology and following the story as the monument guides you through the systems of corridors and stairways. I’d like to tell you how we followed this path through the most complete ensemble of Buddhist reliefs in the world…But that would be a lie! I go way to distracted by all the amazing details that I was like a pin ball in that place, going from one side to the other trying to soak in as much as I could! 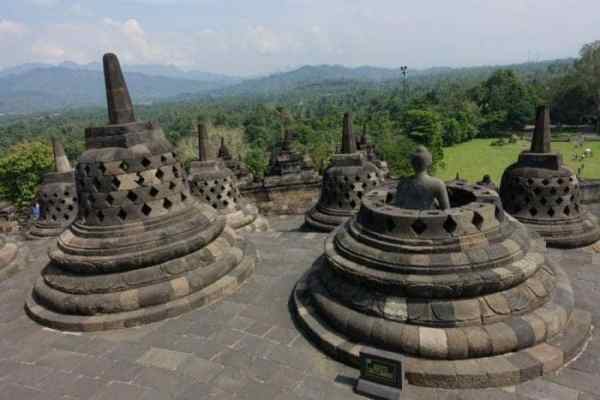 The highlight of the temple for most visitors is the top three sections where the central dome is surrounded by perforated stupas. This is the shot that enticed us here and the sheer scale of the place does not disappoint. The stupas completely surround you, creating a maze of absolute beauty that is topped off by the amazing mountainous view beyond. This truly felt like stepping into those adventure films that had captivated and inspired us as kids, but this time we were here and it was real! The most amazing part was discovering that inside each one is a statue of Buddha. Sitting on the edge of one of the platforms I was in my nirvana taking in this most enlightening and spectacular place. 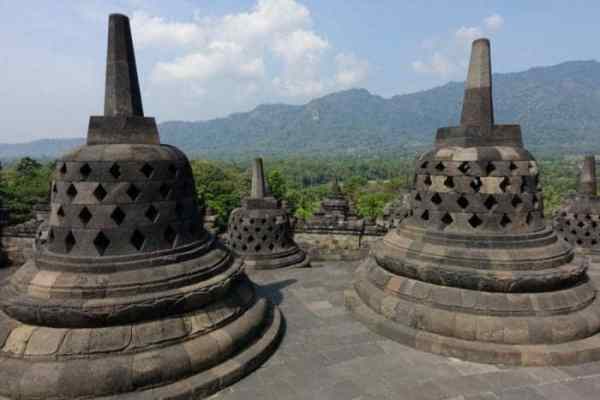 As the midday sun began to rise taking away that perfect lighting and heating up the dark stone making the heat almost insufferable the crowds began to gather. After 3 hours exploring we left as they were piling in, beaming ear to ear almost as bright at the beating sun with our most amazing morning at Borobudur Temple! 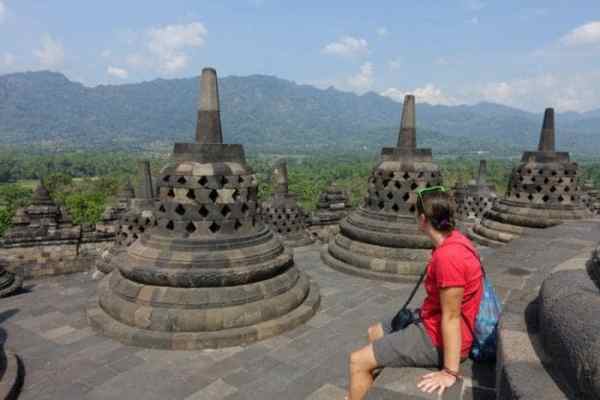 Why we didn’t got for sunrise (Lazy and poor!)

Many people often head here for sunrise, and I totally get that, but at the same time after so many sunrises here and there I am still not entirely sure that the obsession is! I much prefer the sunset, it finishes off the day nicely and doesn’t require an ungodly alarm clock! We had considered heading over for sunrise. 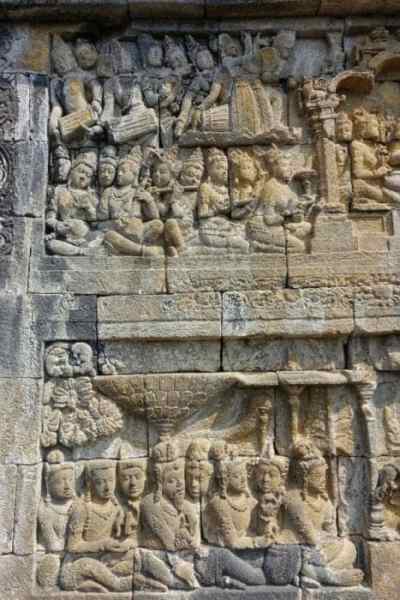 However there where a few things that stopped us.

The time of year in Indonesia meant that many of the mornings were quite misty with low lying cloud which would clear usually before 8am. This meant others in the hostel who went for sunrise in the days that we were there mostly said they didn’t really see much. 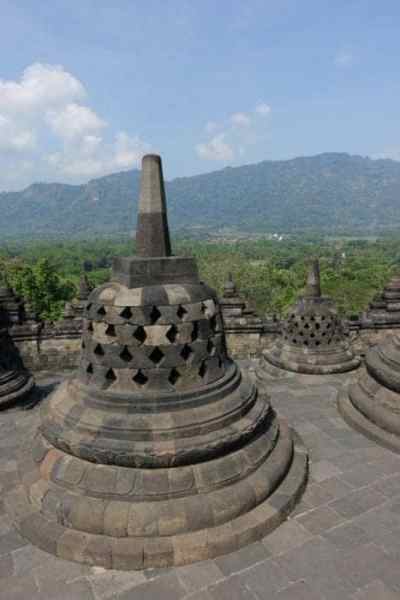 Then there is the obvious, getting up early! To make the sunrise we would have to be setting off before 5am from the hostel. Now, I’m not a morning person even at the best of times so this really was not something I was particularly pleased about. We were also still pretty shattered from our over night bus that was delayed just a few days earlier too! 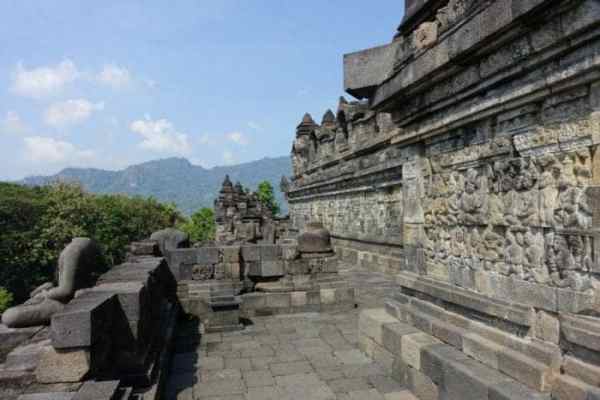 Then there comes the killer punch, Price! The temple itself is already quite expensive to visit and was pushing our budget if we are honest. Then comes the revelation that would must pay again to gain entrance to the temple early put the final nail in the coffin for that idea due to our already tight money constraints! 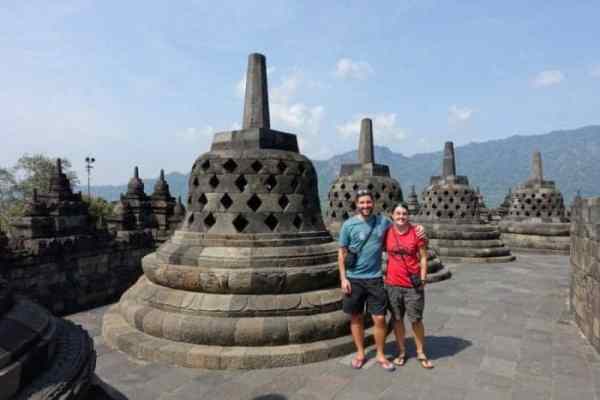 How to get to Borobudur Temple and price 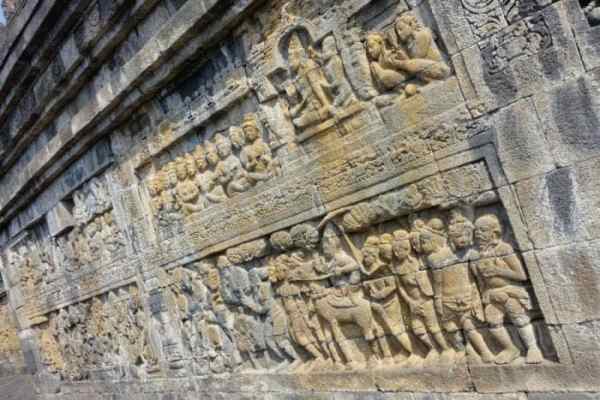 Many people head over on tours in minivans, don’t do this! You will just end up with limited time, over crowding and having paid too much!

You can take public transport using the bus from Yogyakarta:

The route is straight forward enough, use maps.me for offline maps, and it gives you more time for exploring!

Book your transport across Indonesia and Asia here: 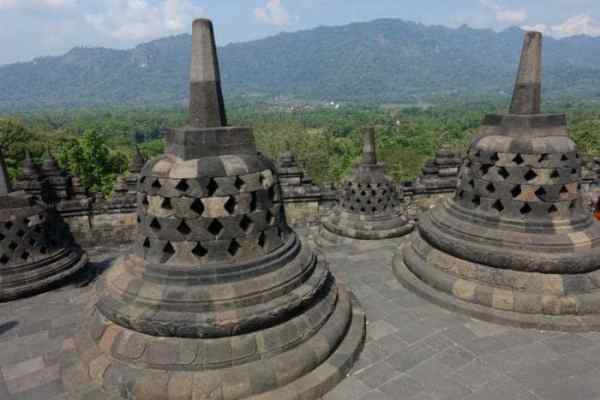 Have you ever visited the amazing Borobudur Temple from Yogyakarta?

Thanks for the helpful tips! My bucket list keeps growing…

0
Reply
The Roaming Renegades
Reply to  Sarah | The Wandering Road

Thanks! Hope you get to go!

Great post! I have never actually visited a Buddhist temple, but this one looks magical. Thanks for sharing!

Thanks!! When you go to Asia you will visit so many!

I’m so desperate to go here but it has to wait for a few years yet… Really interesting post; I didn’t know there was a tiny buddha inside each stupa. I’m glad there’s lots to look at in addition to the stupas (and I don’t think I’d be leaving at 5am for it, either!)

Thanks! Yes it really is such a beautiful place, worth the wait!

Great article. I am so with you on the early morning thing, I prefer sunsets myself. Really informative post. I hope to get to Asia again soon and check this place out.

Ha ha, I know right! Thanks!

Comparing it to Angkor Wat was a big call, but you’ve got me convinced. A definite must go to location my list now.

Yeah for sure, of course it isn’t on the same scale but it is just as important

I have forgotten about Borobodur! Thanks for reminding me!!!

I kept hearing bells ringing in the back of my mind as I scrolled through your photos and read the text, what an impressive complex that I didn’t even know existed! Glad to see you enjoyed yourselves! Cheers!

Yeah you really do have to go and visit, amazing place

I would have never guessed that it was a row of Budha statues around the edge. How cool. I find Budhism utterly fascinating, so this would be an incredible visit to make! Thank you for sharing your experience!

I know!! I never knew until I went up to them as saw!

Awesome post – I cant wait to make my way to Asia, it looks so culturally fascinating. The temples look so appealing!

They are a real piece of Indonesian history