After our epic 7 week motorbike adventure through Vietnam a few months earlier we were keen to get back on some proper motorbikes after exploring Asia mostly on the more convenient and cheaper scooters! Heading over to Bali there is so much to keep you entertained, although, we’re really not ones to spend too long at the beach! However when we learnt there way another way to enjoy the black sands of the Bali beaches, speeding around on dirt bikes, we were sold! This is our amazing Bali dirt bike adventure!

First time on a dirt bike!

After bagging some cheap flights over to Bali we were keen to get back on a bike. This wasn’t the first time we had been on manual motorbikes having spent 7 weeks riding through Vietnam, but it was our first time on dirt bikes! Jumping on the bike straight away I noticed how much bigger it was than the bikes I had ridden before with my feet hardly able to touch the ground either side of me! But the guys who were we with really instilled confidence in us, showing us how these bikes worked and allowing us to learn and make our Bali dirt bike adventure a highlight of our trip. 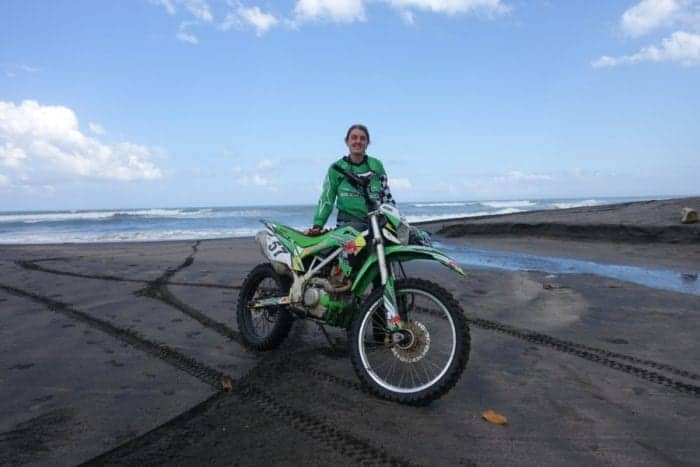 One of the things that I found hard at first was wearing all the protective gear, it meant it was harder to move your feet inwards for the break and gears than what I had been used to. Also the sand meant that much more revs were needed to set off meaning we stalled a few times early on getting to grips with the surface! But as with anything new, its always good to be able to learn and expand your skills through new challenges and our Bali dirt bike adventure was one of the best! 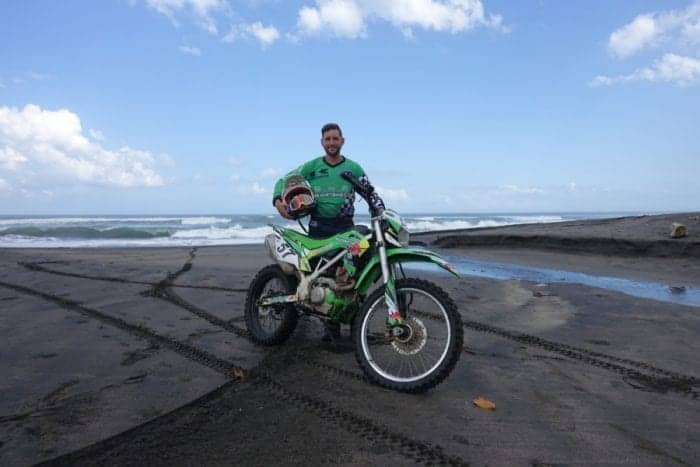 Getting to grips with the bigger bikes and challenging environment

After thinking we had motorbiking sussed after all that time in Vietnam it was time to learn all over again on our Bali dirt bike adventure. Of course, we knew the basics but dirt bikes are much more aggressive than what we had been used to and we also found it awkward wearing all the gear. The gears and brakes on the bike were also much further into the bike than we had used before, add into that the sand and we were definitely out of our comfort zone. But I had always wanted to ride a Kawasaki and in green too, this was a dream come true! 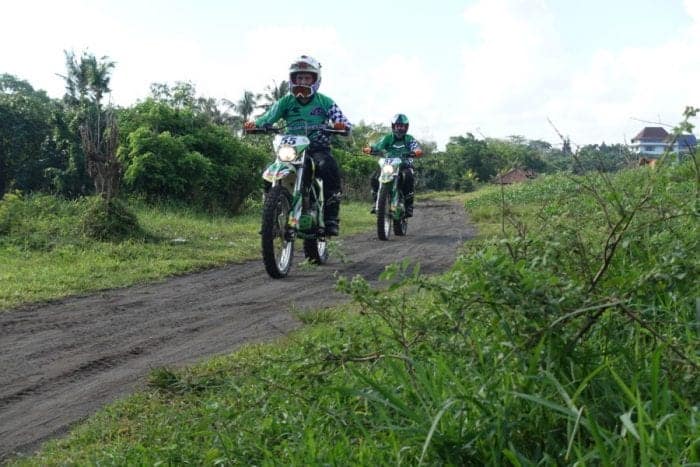 But in reality this is what we wanted, we were used to riding the smaller bikes we had in Vietnam and wanted to step it up and challenge ourselves. Out here on the beach it was perfect for so many reasons, firstly we the place was pretty much deserted and the sand both provided a soft landing for a few tips here and there but also a changing and challenging surface to control the bikes on. Oh yeah, and it was bloody stunning too! 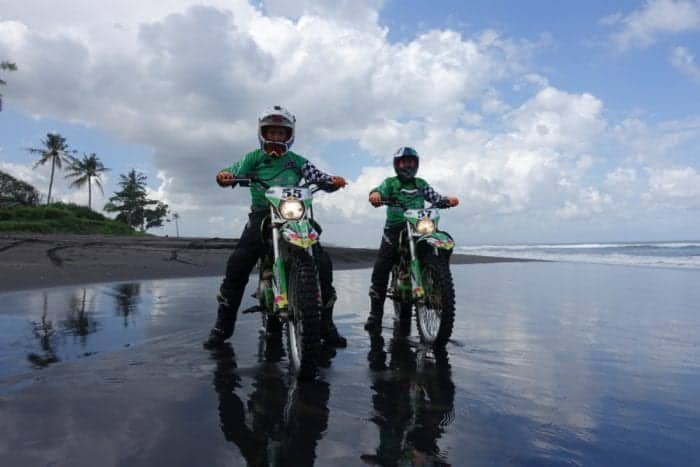 Taking in the beach and rice fields in a different way!

Through our time in South East Asia we had explored our fair share of beaches and rice paddies! Now it was time for a different kind of adventure over this terrain. We initially set out along the thin hard mud walkways of the rice fields. Here the surface was much more like the road but it meant we had to be more balanced along the thinner roads and take our time on the narrow corners. It was a great way to get to know the bikes, their weight, how they handled and rode on a more solid surface. 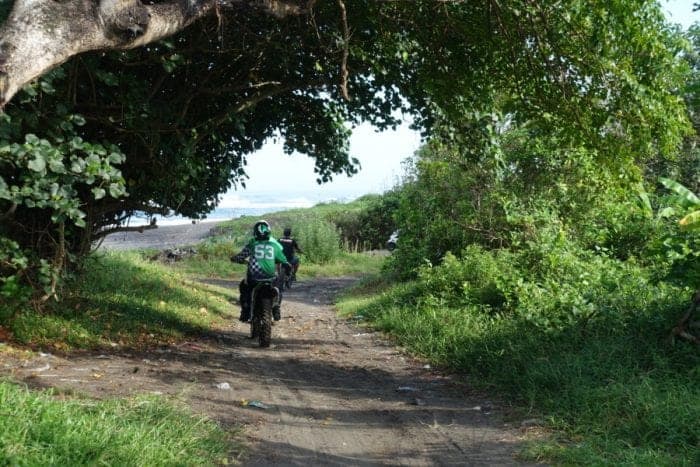 Next it was down on to the black sand beach and for another challenge. The sand initially was quite predictable, offering less traction than the pathways and so requiring some extra gas but riding smoothly. As the bike cut into the sand however, churning it up and creating thick groves where the tired and ploughed through it became much more challenging. Perfect for our Bali dirt bike adventure and a twist on how most people spent time at the beach over here! 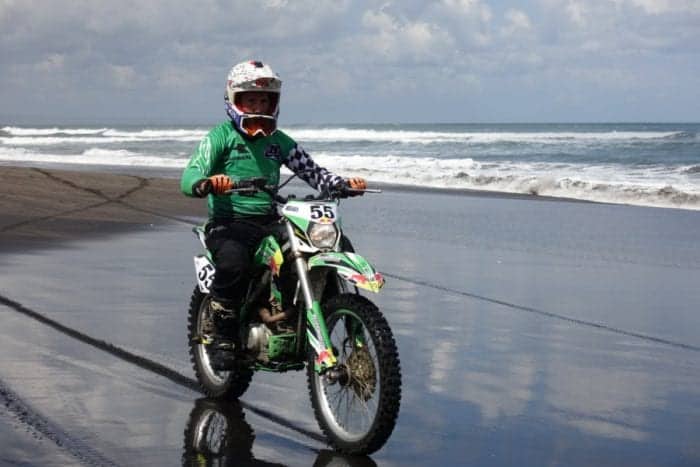 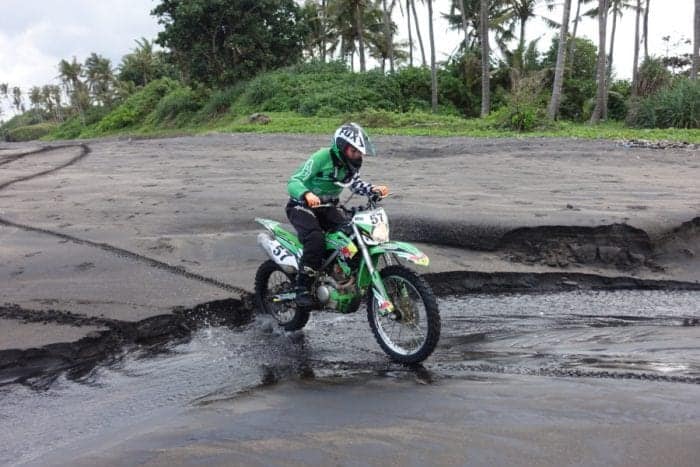 The channels and lines would send the bike sliding off and much more balance and calculated control was needed to navigate the terrain. We also rode over to an area with higher dunes and small drops, this meant we could try our hand at a few jumps and drop which was so much fun and also a huge adrenaline rush! Our Bali dirt bike adventure really lived up to its billing! 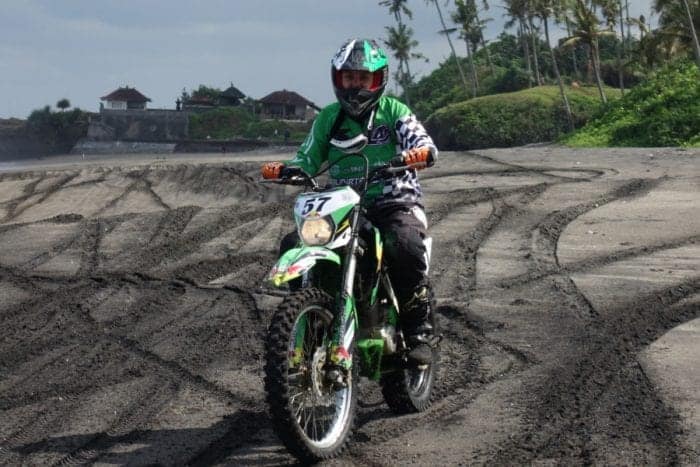 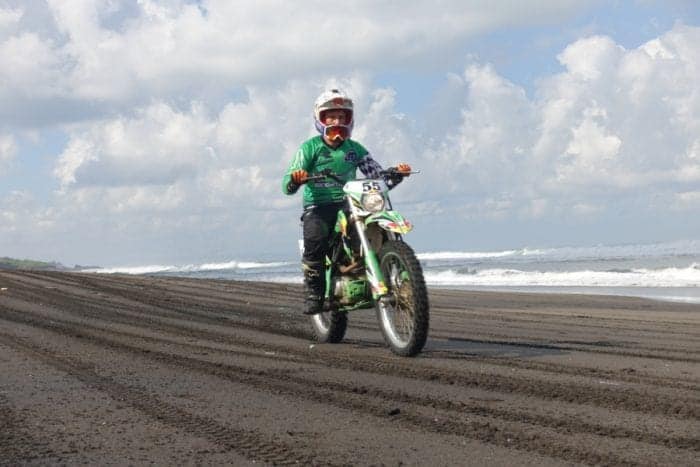 Gaining more confidence and falling back in love with bikes!

As the day went on we were more and more confident and riding the bikes became second nature. I loved the feeling of flying up and down the beach, changing gears and controlling this growling machine through the contours of the sand and over the dunes and drops. Sailing through the surf, the water flying up into your face and once again adding another challenge as the bike begins to slow and slide just added to the fun. By the end we didn’t want to hand the bikes back, this was the most fun we had had on the beach by far! 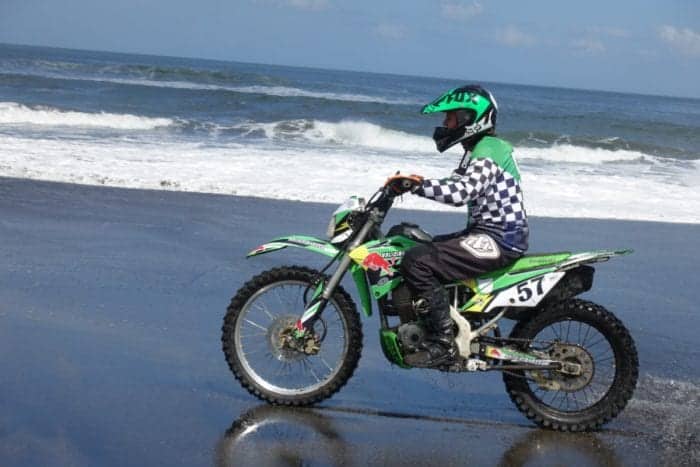 We had almost forgotten how much we fell in love with riding motorbikes some 4 months before and this just reignited the new passion we had discovered on our tour of Asia… this was it, we we’re buying bikes as soon as we get home! Oh, and next time we come back to Bali we are planning on heading off on one of the more advanced Bali dirt bike adventures! 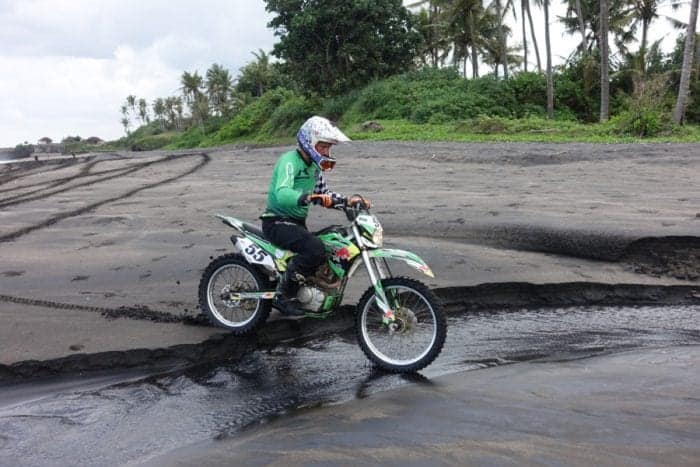 How to do dirt biking in Bali yourself!

Head over with some great Bali flights and get in contact with the guys at Bali Dirt Bikes. They operate different levels of Bali dirt bike adventures which means you can be an absolute beginning and have a go. The best thing about dirt biking is that it is off road, that means there is no traffic to contend with and it doesn’t matter if you have a license or not. 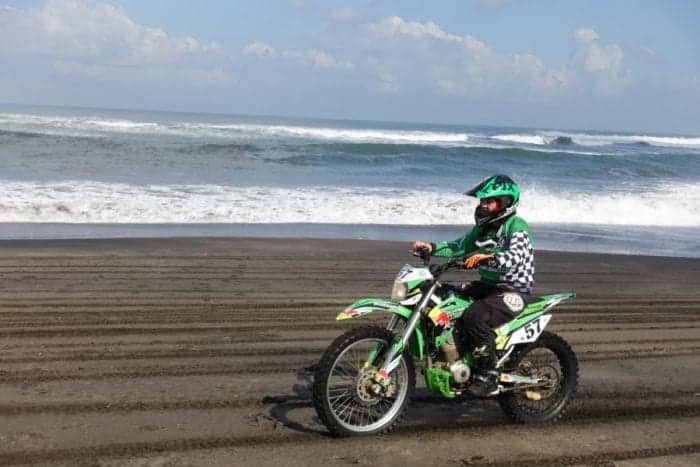 All trips and courses include all equipment, insurance, transport and instruction, you also get to keep your jersey too!

Book your transport across Indonesia and Asia here: 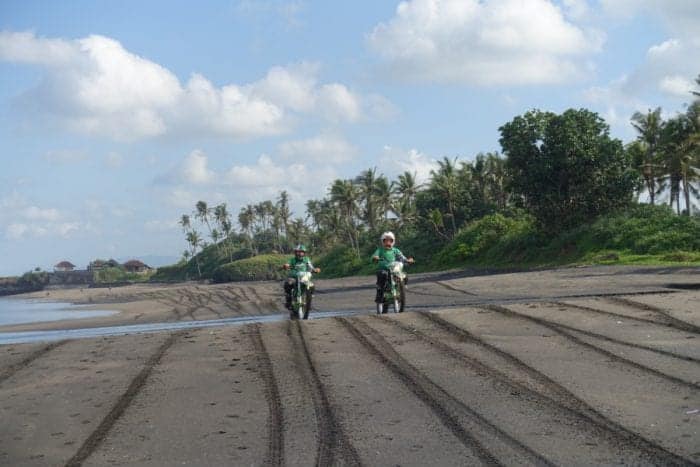 Have you ever been on a Bali dirt bike adventure or done something a bit different in a destination? 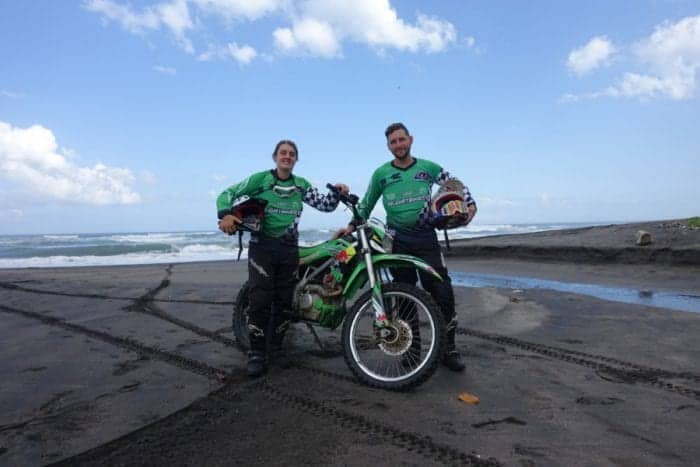 On the beach?! How fun! I always loving seeing what crazy adventures you guys are up to.

Ha ha, we always find something to keep us entertained!

So, so . . . I had to leave Bali because I was getting too bored, what a pity I did not know about these bike rides! I am not sure I could do this (not very skilled with bikes) but I had some fun reading your post

No way! There is so much to do on Bali! Yeah this is something pretty cool to do there !

This looks like so much fun. We’ve explored quite a bit of SE Asia but we’re yet to visit Bali. It’s definitely on our bucket list!

0
Reply
The Roaming Renegades
Reply to  The Van Cave Project

Yeah it was awesome! Bali is such a cool place, don’t be put off my the party image, there are areas that are very much unspoilt!

Dirt bikes on the black sand beach, you guys think of everything! Loved your photos in the surf/sand with the palm trees behind you. Great shots!

Ha ha, we try! Thanks, we had a great guide who took good photos!

Man, I bet ya’ll were sweating buckets under all that gear!

Ha ha, it wasn’t all to bad actually as Bali was a lot cooler than where we had previously been and it felt a bit chilly at times!

This sounds awesome! I would definitely need a little time to get used to them though as well. What a great way to explore!!

Yeah it was such a cool alternative day in Bali, I think if we hadn’t done the bike trip in Vietnam it would have taken be a bit longer!

This is most certainly a different way to get in some beach time. I’m not sure I’m coordinated enough to do it, but it looks like fun!

Ha ha, certainly a different pace to laying back on the beach! It takes a bit of practice but its good fun!

This is new genre for me to live a place. Need to explore this for sure.
hats off to your new found passion.

Thanks! Yes its a cool way to explore Bali in a different way!

I grew up in the country and had a dirt bike as a child. Riding along the beaches of Bali would be amazing and bring back childhood memories.

That’s so cool, my mum hates motorbikes and never wanted me to go on one! ha ha

I haven’t been on a dirt bike since I was a kid. I used to beg my mom to let me buy one and she never would. I would be all over this!

My mum is the same, I always wanted to ride a bike when I was a kid but wasn’t used to! Good job I’m a big kid now! :-p