Many people seem to skip out Phnom Penh when they visit Cambodia, scared by the stories of muggings, put off by tales of a dull and busy city or if they do visit they only come for the Killing Fields and never give the rest of the city chance. We will admit that all this chatter hadn’t gone unnoticed and we were unsure how we would find the grimy capital of a country we had already fallen in love with. But not ones to allow others to dictate to us how we should feel we embraced the chaos of the capital and came out of the other side wholeheartedly loving it! Here’s what to see in Phnom Penh!

What to see in Phnom Penh:

Explore the local markets and see real life in all its grime!

Heading to the market in any city, especially in Eastern Europe and Asia is to really get to the heart of what the place is all about, and also more often than not also the best place to met with locals and experince authentic culture. They might not be pretty places, or for the squeamish, but they are loud, lively and real! We gave the more popular central markets a miss and instead headed over to the locals ones of BKK. Here you will find hardly any tourists and a whole host of confused looks! 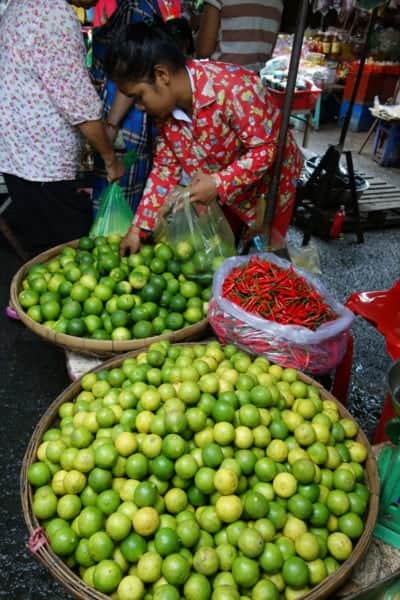 Of all the sections of the markets I always seem to find the food section the most fascinating and yet repulsive. As a vegetarian I go from sheer delight at the rainbow of colours on offers, the fresh floral and citrus smells bursting with vibrance and life. Then around the corner the heavily smell of blood and rotting flesh hits the back of the throat like a freight train. 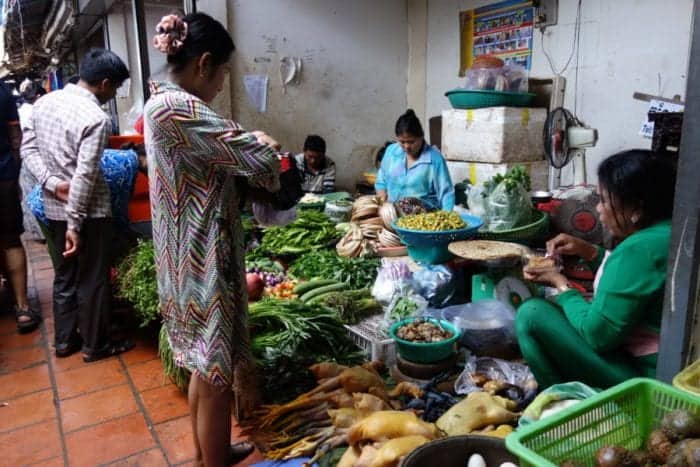 Internal organs are being slopped around, money sits on raw chicken and flies swarm around fish still gulping their last exhausting gasps of life. Its a scene like something out of a horror film for me, and yet just as we sit their with popcorn just to be scared I wander round with a mixture of pure disgust and insatiable fascination at this crazy way of life! These aren’t the tourist markets, here you are in for all the shocking beauty of real Cambodian life. This has to be at the top of our what to see in Phnom Penh guide! 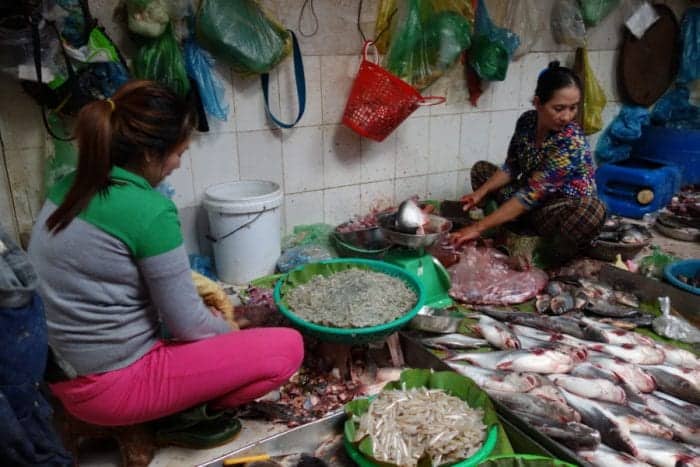 Cambodia has a complicated history when it comes to Royalty, the once ruling family have been through some turbulent times at the hands of those occupying the country but today have what could be considered a ceremonial role. The Royal Palace today is still the official residence of the king of Cambodia and his family who have continually inhabited this beautiful complex since the 1860s, apart from a spell during the rule of the Khmer Rouge. 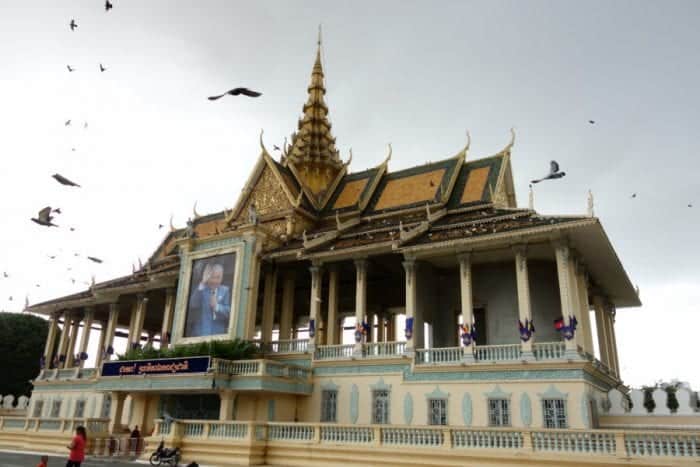 The grounds include the stunning throne hall, silver pagoda and the bright red national museum of Cambodia all within the complex. 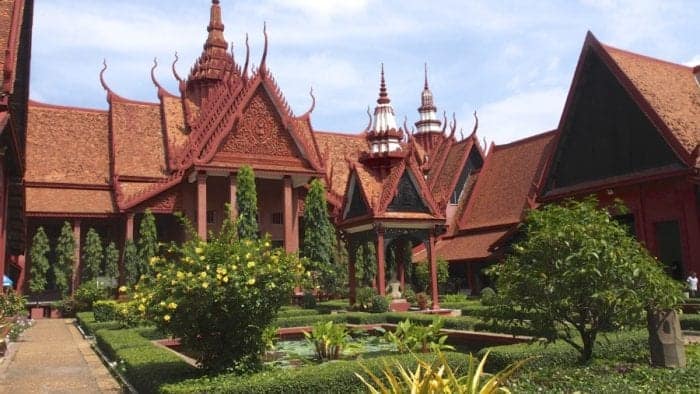 One of the most moving place I have ever visited has to be the killing fields of Choeung Ek around 11 miles outside of the city. Between 1975 and 1979 over 1.7 Million people were killed by the brutal dictatorship of Pol Pot and is Khmer Rouge. Turning the clocks back to “year zero” to create a utopian rural society many died as a result of starvation, beatings, torture, overwork and outright murder. Many “suspicious” people were rounded up and kept in prisons such as S-21, tortured and forced to sign false confessions before being killed. It might seem strange to be included in our what to see in Phnom Penh guide but truly if you see one place in the capital let it be here so you can learn from this horrible time in human history. 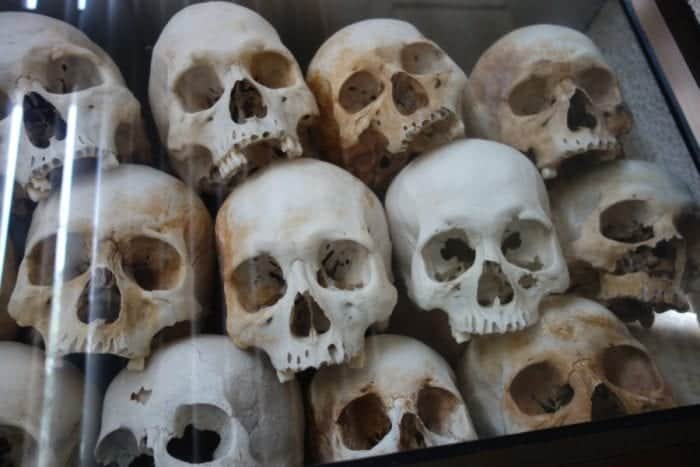 Others as the regime progressed were rounded up in the hundreds each day and killed over mass graves in “Killing fields” dotted around the country. The largest was here at Choeung Ek where around 20,000 people were brutally murdered. To this day many of their bones, teeth and clothing wash up each time it rains and are a much more visual reminder of the horrors here. The most striking of those is the stupa which contains the skulls of over 8,000 people hacked to death here, staring you in the face with their sad fate, an image I will never be able to erase from my mind. 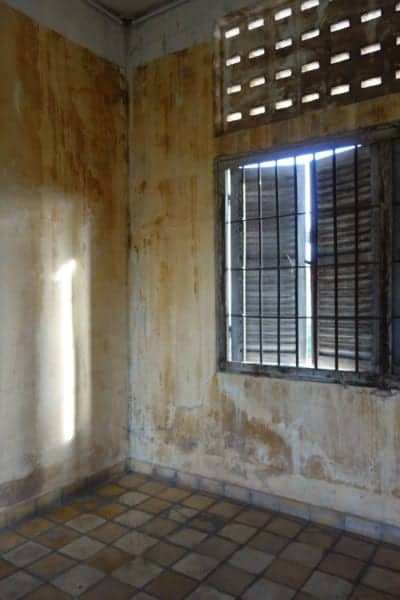 Entrance costs $6 for The Killing Fields with audio guide and $3 for S-21 then $3 for the optional audio guide. 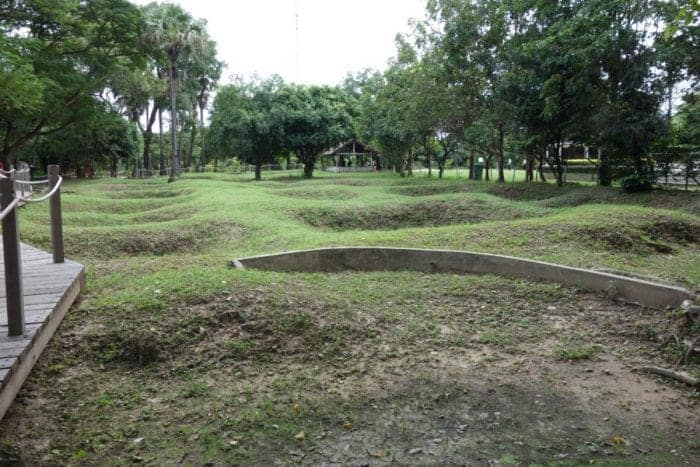 Take some time out at Wat Phnom

Phnom penh might be a crazy and chaotic city, sidewalks taken up by motorbikes, food carts and even hairdressing stalls, but there is serenity and solitude to be found. This spot up on a hill above the city marks the place in which the capital was founded, legend has it that a lady named “Penh” back in 1372 pulled out a Koki tree from the river and planted in atop of this hill. In Cambodia “Phnom” means hill and so the area was named after the hill and its founder! 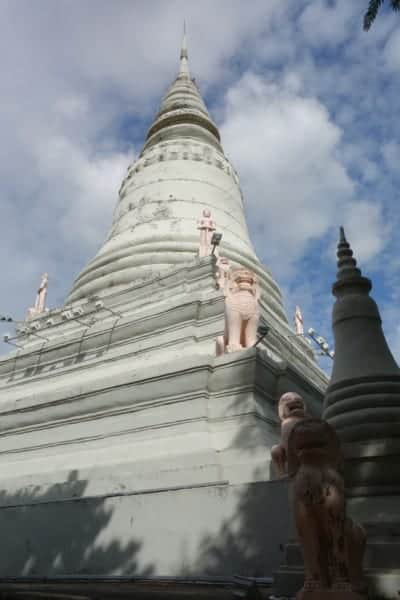 The current temple which sits here was built in 1926 and one of the large stupas here contains the remains of King Ponhea Yat, an important ruler who was the one to move the capital from Angkor to Phnom Penh in the 15th century.  Wandering the grounds it is common to see monks and locals at prayer, a really peaceful place to take time out from the chaos of the city and the top of our What to see in Phnom Penh guide for those looking for a quieter time! 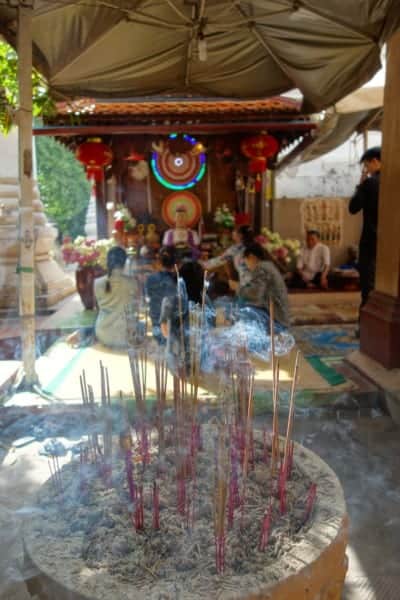 Stroll down the Sisowath Quay alongside the Mekong River

Not a usual inclusion on a what to see in Phnom Penh guide it might initially seem that there isn’t much to do around here, but take a closer look and you can discover some wonderful elements of real life. Besides, strolling along the path of the Mekong as it winds its way through the city is a beautiful and peaceful area to explore, following the flags of the world you will come across all times of life in this area of town. 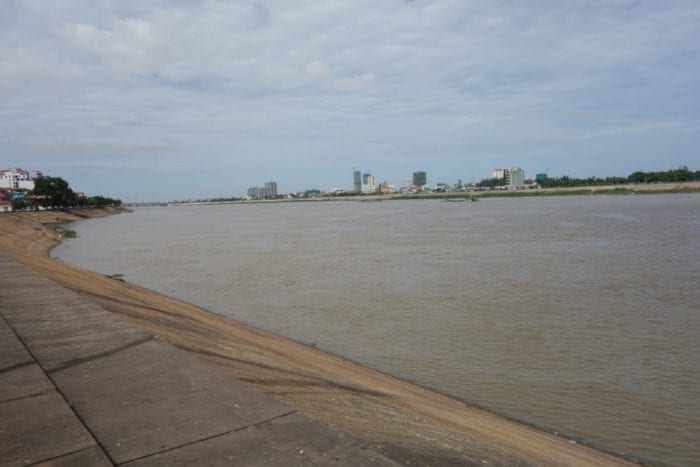 You can also take tours of the river on several cruise boats, some of them can even be taken to travel to other cities further down this important and mystical South East Asian river! 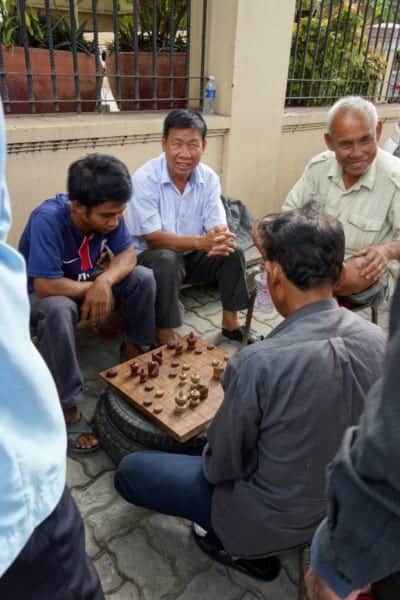 Get lost in the wonderful architecture of Colonial France and see local life at its most interesting!

Phnom Penh is a city full of contrasts and evidence of the various stages of history it has been through. From the ageing communist architecture of “The white building” to the crumbling remains of Colonial France there is so much to discover. Walking might not be the easiest in this city, and you might have to fend off your fair share of tuk tuk drivers along the way. But cut down the side streets, especially further down the river near Wat Phnom, you will witness the beating heart of this busy and chaotic city. Where Siem Reap can feel touristy and tacky at times, Phnom Penh feels raw, grimy and authentic. What to see in Phnom Penh” real Cambodian life! 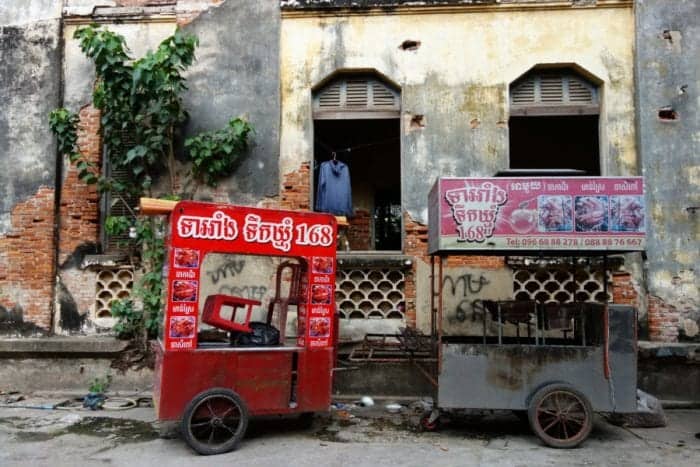 The best way to get to know any city is to get lost and wander its alleyways and backstreets, the Cambodian capital is no different in in truth this is where the real magic of the city is. The Royal Palace may be beautiful in a conventional kind of way, but its also where the few tourists that do venture here gather like flies, for a true experience of the city get lost! 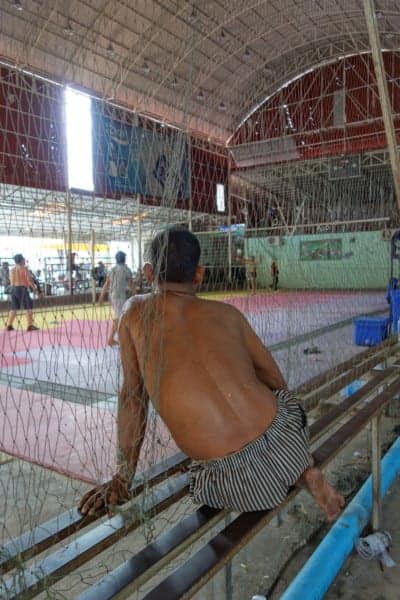 Have you ever taken on the chaos of Phnom Penh?

The sight of the killing fields is really disturbing. Although the temples are really lovely and serene. The local markets give a glimpse of the local life. Phnom Penh is worth a visit.

Yes, it left a lasting impression on us. There is lots to see and different sides to the city, we enjoyed it more than we expected.

I took my time in Phnom Penh but did not see many sights, apart from the school-jail and the royal palace. The stroll along the river was checked but now I see that I missed the local markets, too bad!

There is much more here than we expected to be honest but a lot of what we discovered was due to our very informative hostel staff.

The more I read about Cambodia, the more I want to visit. How long do you think is enough to see all of this in Phnom Penh? Is the weather insanely hot and humid there?

It is one of our favourite countries now for sure. We spent just over 2 weeks in the whole country, we wish we had more but we messed up the date on our Vietnam visa and had to move on. Phnom Penh itself can be done in maybe 3 days. The weather was hot for sure, humidity not too bad. it depends what you are used to, we had adapted by this point and it wasn’t too bad. But it can get hot. But in Phnom Penh there are lots of air conditioned places you can seek shelter in, even just going and having a short walk around the mall!