Liechtenstein had never been a country on my wish list or that I had a burning desire to see, in fact I knew very little about it other than the fact it was tiny and a good answer when it came to geography pub quizzes! But one of our big ambitions is to visit every country in Europe, and Liechtenstein just happens to be quite an awkward one to get to as it is so small it doesn’t even have an airport! So on a “rest” day on our adventure trip in Switzerland we took a road trip over to this fascinating country for an experience which would prove as awe inspiring as it would strange! Here’s beautiful little old Liechtenstein! Ok, but where the hell is it?

We hear you, many people when we mentioned this day trip, including those at Geneva Airport who we rented the car off, had no idea where it even was, let alone that is was in fact it’s own country! Well here it is, nestled in the alps between Switzerland and Austria.

So, what’s up with Liechtenstein?

Officially the Principality of Liechtenstein this tiny tax haven is in fact the only country whose borders are entirely within the alps, the towns and “cities” of Liechtenstein mostly lie in the flat areas between the towering mountains! The country is also not a part of the EU, it uses the Swiss Franc (although the Euro is widely accepted) and they speak German! Their licence plates are also strangely black and I find it awfully difficult to spell! The capital city is Vaduz and the country as a whole has an area of around 160 Square Kilometres (62 square miles) and a population of 37,000 making it one of the smallest in the world by both area and population! Unemployment in Liechtenstein is also crazy low at only 1.5%, it’s also the second richest country in the world…and one of the most expensive we have visited! 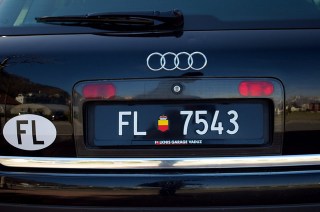 We drove to Liechtenstein from Interlaken. On the map it is in an almost diagonal line to Vaduz but the fastest route was along the Autobahns and through Zurich (where we got lost and almost ran over by a tram but that’s another story!) The driving time is around about 2.5 hours without stops or detours (should I say when people decided to come off the motorway randomly without instruction to do so!!). This was a “rest” day for us so a scenic drive was a nice change of pace from jumping off cliffs and hanging off the side of mountains. The 123 mile journey was actually a really fun road trip with some impressive scenery along the way. It is however recommend that you use a SatNav or other system as the only signs we saw for Vaduz were pretty much as we got there, on the way back however it was much easier when the app we were using decided to crash! Zurich is probably the closest large and well connected city to Vaduz as it around an hour and 10 mins away driving. It also has a train service direct to “Sargans” which is a town on the border and takes around 1.5 hours, after that you must connect using a local bus towards Vaduz. What is there to see in Liechtenstein

Dating back to the 12th century this castle is still home to the Prince and ruler of Liechtenstein and looms above it’s capital the hillside above. The castle isn’t open to the public but there is a trail which allows great vistas of the castle and mountainside which can be hiked. As it was pushing 35c when we visited we decided to admire the castle from below with a cold glass of coke! It really is quite an impressive and fairy tale esk sight! Built between 1932 and 1933 the Vaduz Town hall sits right in the heart of the city and acts as a gathering point. The square in which it sits offers a relaxing place to sit back with a sandwich or a beer at the cafes and bars which surround it or browse the markets and stalls. The recently redesigned plaza also hosts festivals and sporting events! One of the first places we came upon in Vaduz is the beautiful parliament square which is home to several of the countries municipal buildings as well as it’s council and parliament chambers! The square and it’s buildings combine old and new architecture as well as plentiful examples of public art to create a quite lovely space to wander through on a lovely sunny day! Given the 35c weather when we visited Liechtenstein we decided against heading into the mountains for a hike but when the surroundings of the city are truly breath taking. The mountains offer a wealth of trails as well as a ski resort in the winter meaning this tiny country could keep you occupied for longer than you might imagine! Stepping out of the city and getting a closer look at the alps which enclose Vaduz in itself was spectacular! This striking Neo-Gothic cathedral was built in 1874 and was built on the site of medieval foundations. Not far from Parliament square this rather small but beautiful cathedral is right at the heart of Vaduz. It is the burial locations for many of the countries past princes and their wives and so holds a special place for the people of Liechtenstein. For me this was one of the highlights of visiting Liechtenstein, sitting in the “city” of Balzers this stunning castle once again sits perched on a rocky hillside with the dramatic alps looming in the backdrop. This makes for quite stunning view of this castle which dates back to around 1100! Part of the castle are also open to the public as it does not serve as an official residence! A trip to Liechtenstein isn’t complete without a stroll around some of the tiny villages, vineyards and farms of this beautiful country. The country is so small that much of it can be easily walked, just a few short minutes from the heart the Vaduz there are lush green fields and open countryside surrounded by gorgeous mountains! Everyone loves a passport stamp! Well in Liechtenstein you can get yours stamped for 3CHF at the tourism office in Vaduz, which is right by Parliament square! How cool is that! Heading over the river into Liechtenstein and the scenery which surrounds the country blew us away. We were a little unsure of what we would find here but it really is beautiful. Parking up and strolling into the “city centre” felt a little strange, this is a capital city and yet it is no bigger than a small town.  In fact at one point we parked in one city and walked to another, five minutes down the one and only main road! It almost has this naivety to it, calling such a place a city as though they have never experienced the chaos of New York or Tokyo! There is hardly any crime here either, the prince who still rules this tiny country lives in his castle above the capital and can reportedly be seen doing his shopping with the locals on a Saturday! Just to visit such a small place is a novel experience in itself, almost like a country in it’s fairy tale bubble. Rugged mountainsides, charming princes and ancient castles!
It’s quite surreal for there to be fields, vineyards, cattle and mountains all within a stones throw of the parliament building! But flags fly proudly here and although they may be reliant on the surrounding countries from some things they are also fiercely independent and it’s that spirit which has created this fascinating little principality. Is it worth a visit, Yes for sure! You will have been to nowhere else like it before that’s for sure! It’s a great place to visit if you are in the vicinity and up there with one of the most beautiful. A day trip will easily suffice for you to see all the highlights of this country let alone it’s capital, but there is more to keep you occupied in the mountains if you wanted to say for longer. In the summer there are numerous hiking trails and in the winter even a small ski and snowboard resort! Have you ever visited Liechtenstein or any other micro country? Liechtenstein’s geography is so beautiful, definitely gonna visit it one day