We had already fallen head over heels in love with Bulgaria by the time we boarded the train in Sofia to make the slow chugging trundle through the mountains and countryside towards Plovdiv. We knew not to much about the second largest city in the country apart from its famous Roman Ruins, but upon visiting we discovered just how much more it has to offer. The history here not only dates back to Ancient Roman times but also to the Ottoman era of Bulgaria with a stunning old town. Add to this the unique bohemian and artistic atmosphere and has an Plovdiv effortlessly cool vibe with history and culture around every corner.

Plovdiv might be more well known for its historical side but the city has managed to step right into the modern era with wondrous effects. Instead of coming across as too forced or some what concocted to look “cool”, Plovdiv has areas of the city where some of the worlds greatest artists come to spray. 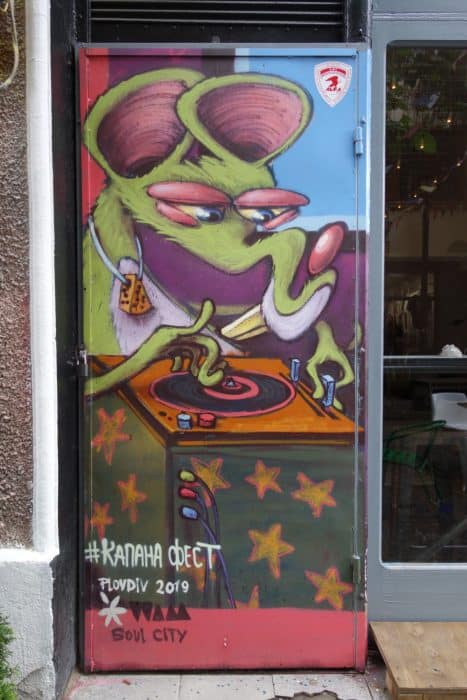 Art here is encouraged and there are some magnificent and well respected examples to be discovered. It all adds up to create a really colourful, vibrant and energetic feel to the city. 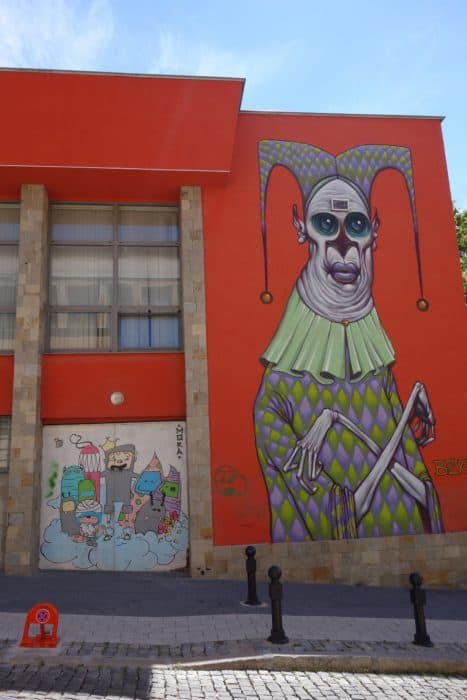 There aren’t many cities in the world with a huge crag right in the centre! Even if you are not into clinging on to the side of a cliff by your finger tips these rocks provide a stunning vista over the city. 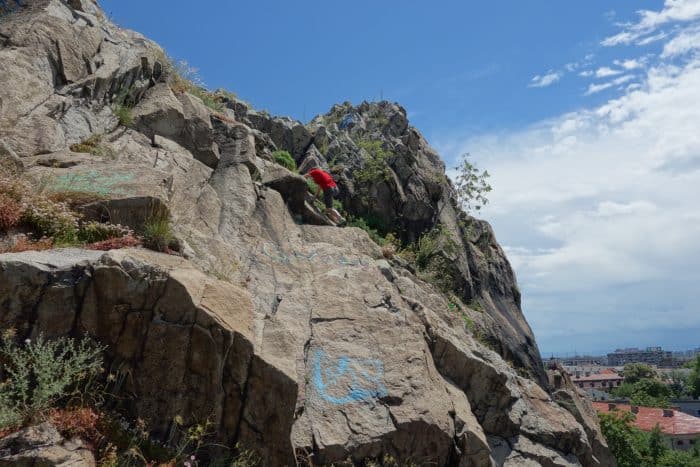 We didn’t bring along our climbing gear and temperatures were in the mid 30’s, so we scrambled up some of the high walls in our trainers!! But there are plenty of less life risking routes too! Up on the rocks you can escape the noise of the city and chill out with beautiful 360 panoramic views over this wonderful place! 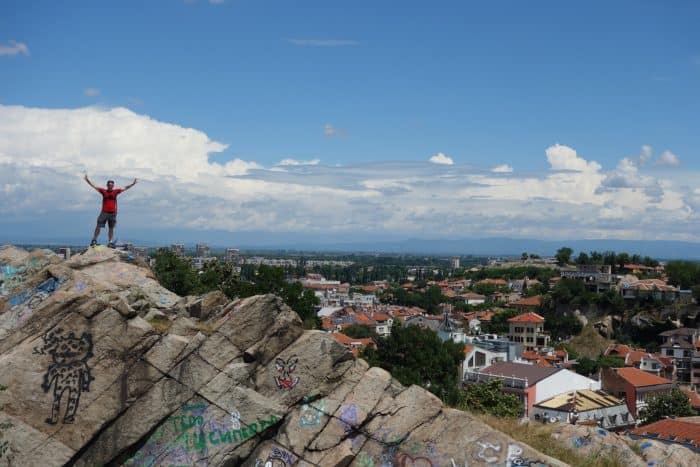 Wander the charming old town and explore the preserved buildings

Head into the amazingly preserved old town of Plovdiv and you step back in time to the Ottoman era of this beautiful city.  The Ottoman army conquered Plovdiv in 1364 and certainly left their mark, wandering the narrow cobbled streets surrounded by the traditional wooden multicoloured homes of that era is simply breathtaking. 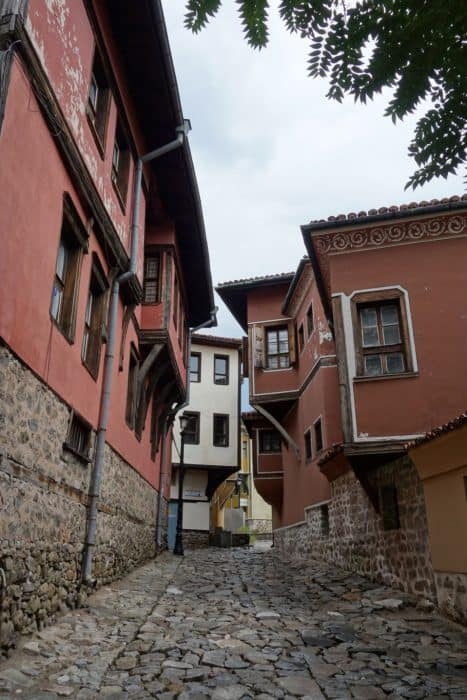 Plovdiv has some of the most well preserved architecture from this era and many of the old houses are now museums that can be visited too such as the Balabanov’s house and the Danov house. The craggy and steep streets remain largely unchanged and remarkably intact creating an intense maze like layout that you can’t fail to fall in love with! 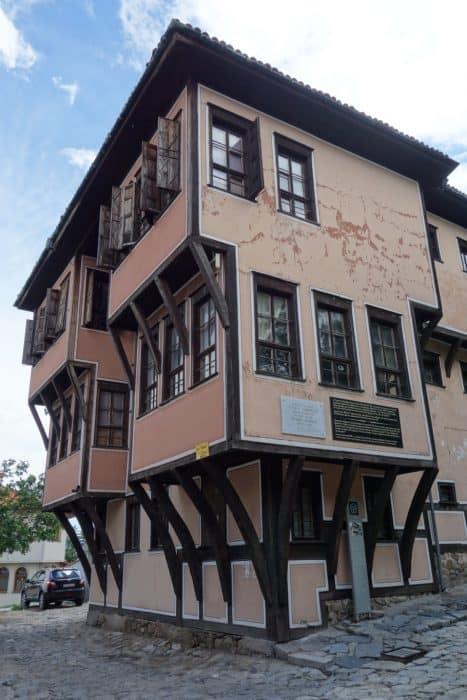 Step back in time in the Roman amphitheatre

Probably Plovdiv’s most well known attraction it is clear to see why people flock here. The amphitheatre set proudly overlooking the city allows you to experience the ancient roots of this city. Claimed to be the 6th oldest in the world, Plovdiv’s origins date back to 5000BC and in one of the most well preserved examples in the world you can literally walk in the footsteps of history. Constructed between 98–117 AD the theatre was once used for bloody gladiatorial battles and despite still being in use today the program of entertainments has thankfully shifted to concerts, plays and cultural performances! 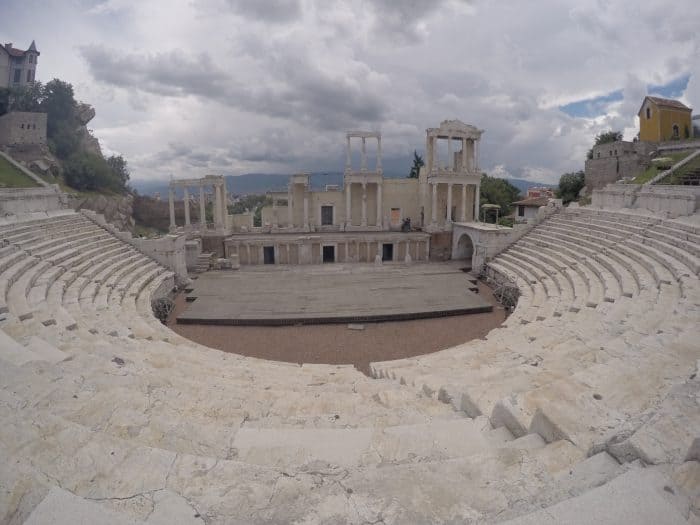 Hike up to the Alyosha Soviet Army Memorial

This soviet memorial that stands proudly above the city is somewhat of a controversial figure in modern Plovdiv. After the fall of communism his future seemed rather uncertain and many would still like him to be pulled down. This 36ft tall concrete statue a top of a 20ft pedestal stands on top of Bunarjik Hill in a rather imposing fashion. 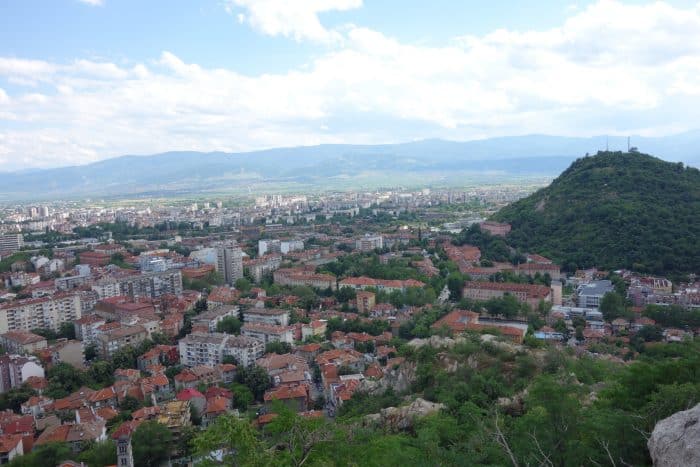 The model for the statue, Alyosha Skurlatov, a soldier of the 3rd Ukrainian Front, died in 2013 at the age of 91. However you feel about the history and symbolism of this statue there is no doubt of the stunning views that it offers and the peaceful serenity of the hike up through the trees to its base. 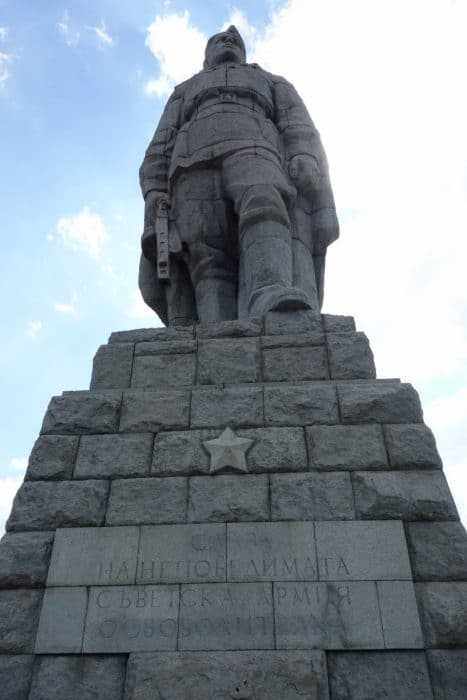 Visit the huge Roman Stadium in the historic centre of town

Walking through the modern Plovdiv you cannot fail to take in the history that surrounds you. The city centre of Plovdiv is really quite unique in the treasures that it holds within. The Stadium of Trimontium literally runs below the main pedestrian street of the city and is exposed in many sections and covered by buildings in many others. Being one of the largest Roman structures on the Balkan peninsular it is certainly a sight to behold right in the centre of the city. 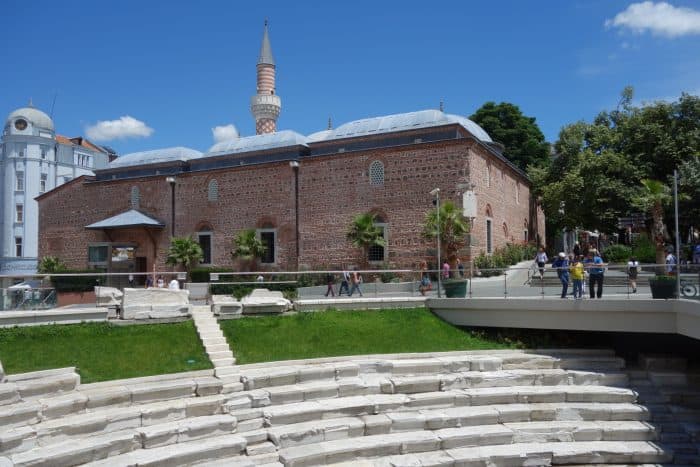 Located in the same square is the Dzhumaya Mosque built from 1363 to 1364. The combination of both within such a small area really exemplifies the breadth of history in this city from the Ottomans to the Romans and beyond. Believed to be one of the three examples of the oldest type of the Ottoman worship buildings still preserved in the entire region. 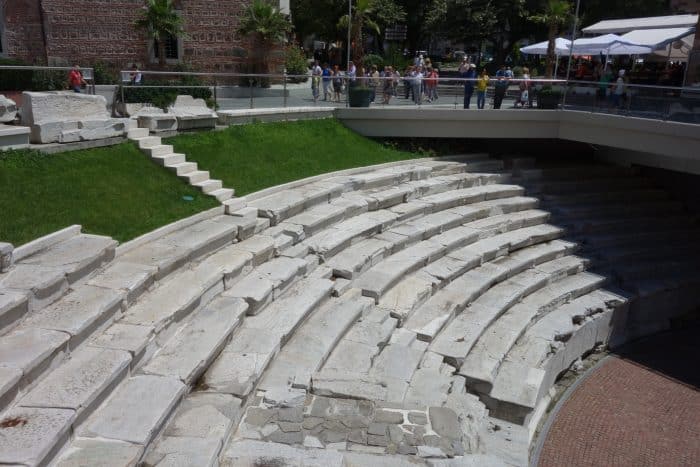 Get lost in “The trap”, the Plovdiv’s bohemian quarter

Given the wonderfully historic and beautiful quarters of Plovdiv its hard to say which is a favourite, but if we were pushed it would have to be “The Trap” or Kapana in Bulgarian. So named because of the maze of tangled little streets and your subsequent inability to find your way back out! The area is a centre for bohemian culture in the city and has a thriving artistic and alternative scene. 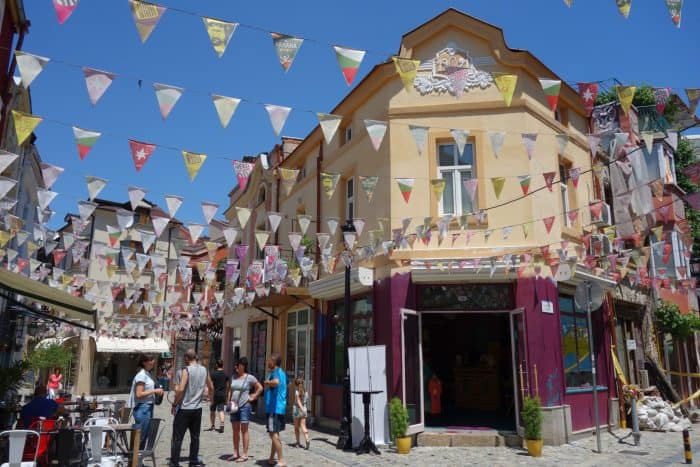 Dating back 5 centuries this area has been a home to the city’s craftsmen and more recently received investment from the government to transform these once dilapidated streets into a hub for the creative industries. This now almost entirely pedestrian region with its colourful tiny and tightly packed buildings and its relaxed and happy atmosphere is a wonderful place to explore. 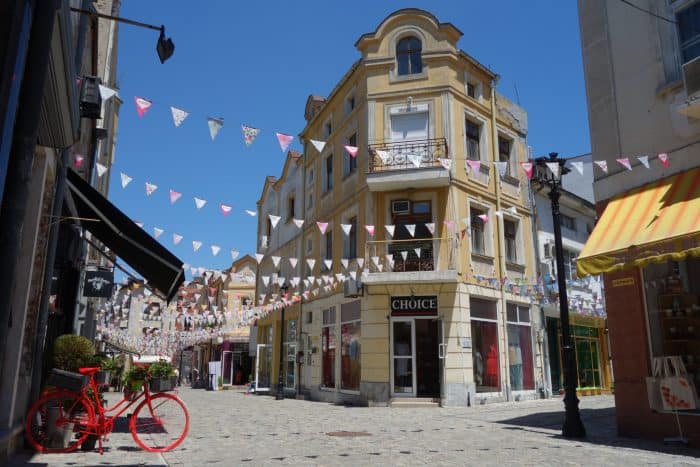 Staying in a local apartment with AirBnB

Whilst in Plovdiv we had one of the most unique experiences we’ve had during our travels. With a shortage of affordable hostels in the city we opted to stay in the spare room of a local using AirBnB. What greeted us wasn’t quite what we expected but it sure what different! 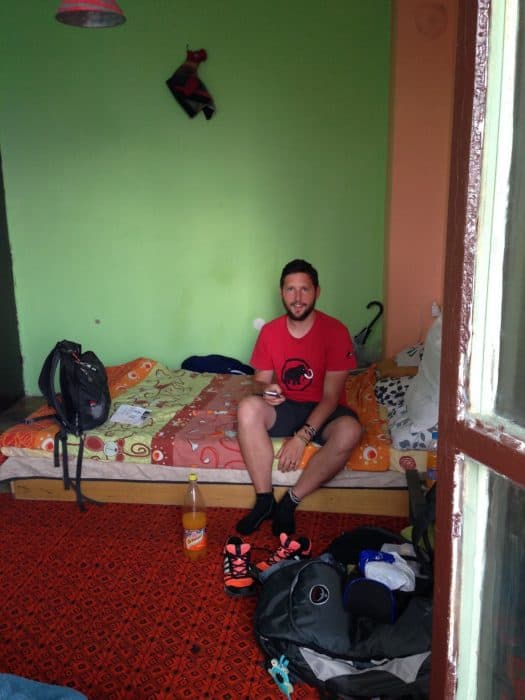 In an old communist bloc apartment we stayed with a lovely creative couple who had built all their own furniture and play in a local band! Over a glass of homemade Rakia we stayed up chatting about music, art and Bulgaria whilst playing with the dog Kuba! I’ve never quite stayed in place like this before but it sure was a great way to get to know local culture! 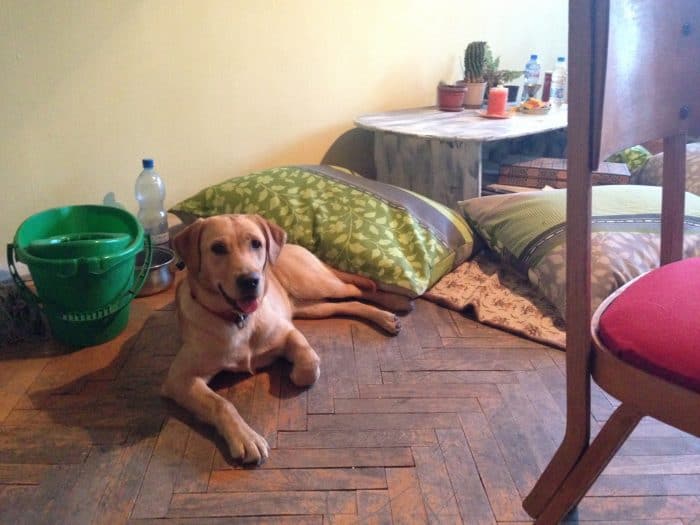 Have you ever visited such a historical and diverse city? 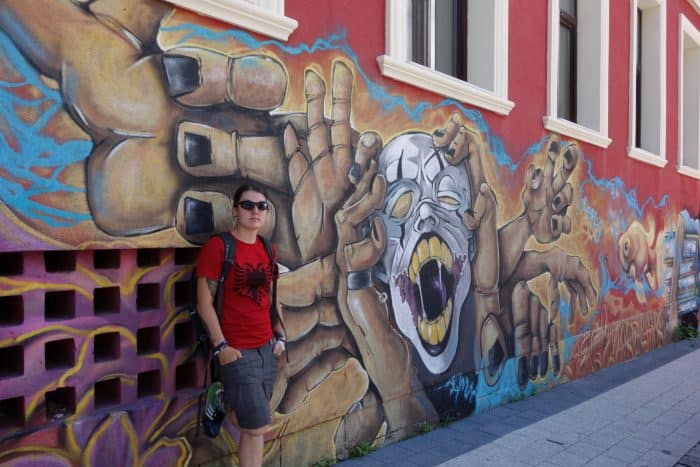 Check out our adventures with our backpacks

Plovdiv seems like a lovely city to visit. I love vibrant cities that are rich in history and culture. The street art reminds me of Wynwood in Miami.

Yes it is a lovely place, we have always wanted to go to Miami.

This sounds amazing! I’d love to see the amphitheatre in person. What a cool place to visit!

It really is an impressive example of Roman ruins, well worth visiting.

We’ve stayed in AirBnB’s but only private apartments. I’m glad to hear you had a good (yet unique) experience with a shared space. Now that we are traveling more and trying to stretch our money, we will definitely be using this option! Love the street art.. who knew?!

Yes this was our first time with AirBnB, our first was private but after couchdsurfing and staying with other local people we didn’t think twice about using this option. It was also a lot cheaper too. Plovdiv is a street art lovers paradise too!

Loving those cobbled streets – beautiful. That amphitheatre is stunning. Looks like you guys had a really fun time there, thanks for posting.

Yes we really did love the city, so many different things to see and do.

wow i had no idea there was so much unique street art in plovdiv!

Yes, we had no idea but were really pleasantly surprised. Lovely place

Wow, there’s so much variety in Plovdiv. Haven’t seen a city quite like it before. Love the street art and the beautiful panoramic view you had after your climb. Definitely looks like a great place to visit.

Yeah, we absolutely loved the city because of how diverse it is, a highly recommended destination.