When we originally made plans for South East Asia one of the things we wanted to do was motorbike around Vietnam. After watching that famous Top Gear episode we knew just how much the country had to offer and how much riding a bike would allow us to see. Having finally, and somewhat miraculously, gotten bikes and made it half way up the country after considering many time whether to actually do it or not, here we were, at the main feature of that inspirational episode: The famous Hai Van Pass! It was time to see what all the fuss was about!

Waking up that morning I was more excited than most days to throw my leg over the bike and get the throttle going. It had been an amazing adventure up to now but a damn tiring one. Nobody seems to mention the early mornings, aching limbs, saddle soreness and long days when they talk of the dream of riding through Vietnam. But as my tush toughened up, my body clock began adjusting and I gained more confidence on the bike I began to look forward to the riding days. But today was a special one! 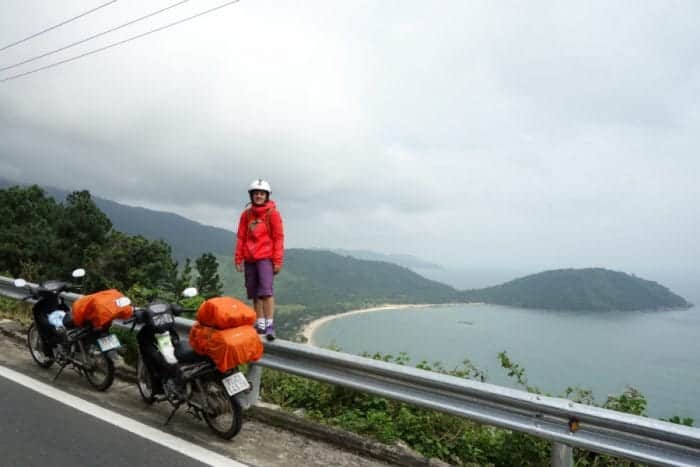 The ride was a short one for us, only 64km from Da Nang to Hue, or next stop. On this journey we managed almost 500km in one day, over 18 hours of riding from early morning until well after dark. So today at least we could get up at a reasonable hour, relax over breakfast and take our time on what was billed to be one of the highlights our 7 week road trip through Vietnam. 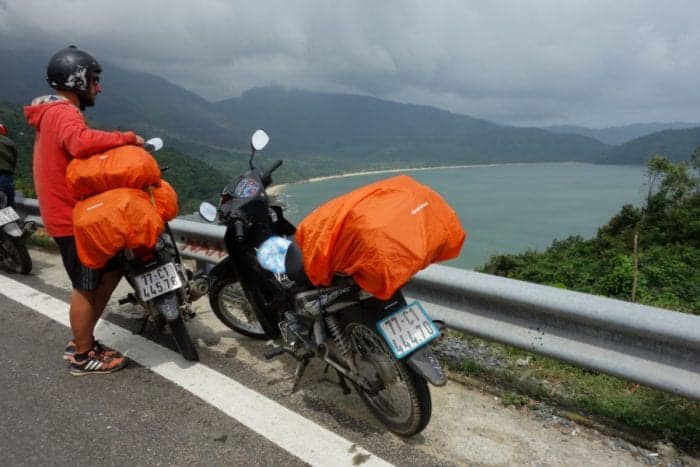 A bikers paradise of twists, turns and scenic views on perfect tarmac!

The Hai Van pass is as dramatic as it is scenic. What also makes it one of the best roads in the country to ride is the fact that a new tunnel cut into the rock below to avoid this “inconveniently longer route” has been made. This means all the annoying huge trucks and buses are all diverted down here, leaving the high road only for the bikers! This also means the road is in good condition with perfect sticky tarmac without the heavy trucks creating dangerous potholes like on many of the other roads in Vietnam. 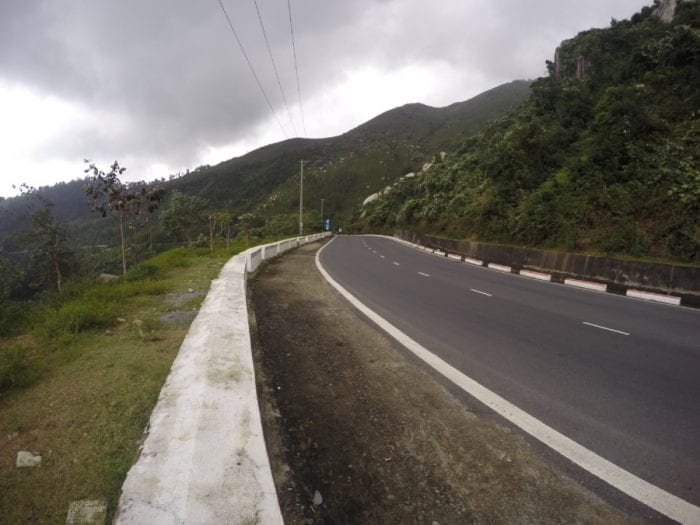 Translated into the “Ocean Cloud Pass” this wonderful name describes perfectly the scene that will lay itself out in front of you. Lasting a mere 21km the series of twists, turns, bends, curves and contours begin shallow and tame. Skirting the cliffside of the azure ocean as it glistens in the beating sun. The corners soon become more winding, tighter and more extreme. Our weeks of riding paying off and allowing us to take them smoothly and with the freedom of a bird mid flight. The feeling as you swing around perfect bend after perfect bend is almost indescribable, if travel is freedom then this really is the next level. 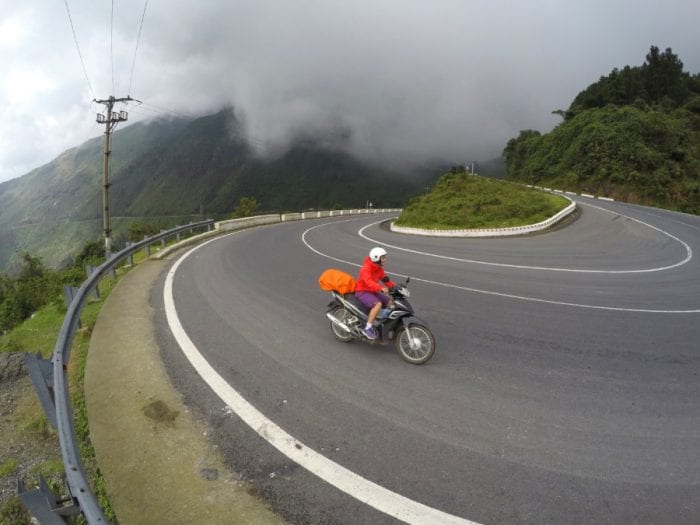 The road begins to become steeper, dropping down the gears to negotiate the banked contours of the jaw dropping turns. On one side of you is the stunning Vietnamese coast, to the other is the the breathtaking mountain that characterise central Vietnam, the usual cloud hugging their ridges and peaks. Riding into the clouds the weather suddenly changes and visibility drops down to only a few meters, but we’ve encounters this before! Stopping off to see the abandoned Viet Cong structures near by the aptly named “cafe in the clouds” we continued on, chasing the sun on the other side of the pass! 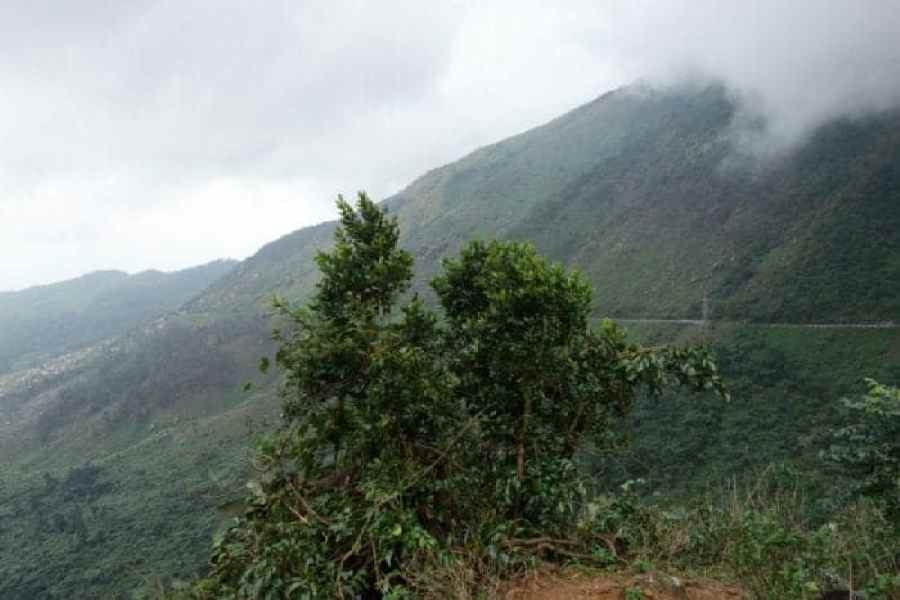 Riding in Vietnam turned us into bikers! We only wish this historic road was longer!

Top Gear presenters called the Hai Van Pass “a deserted ribbon of perfection, one of the best coast roads in the world”, and it certainly was! Vietnam might have better roads out there thats for sure, but not many of them as a accessible or as diverse as this beauty. 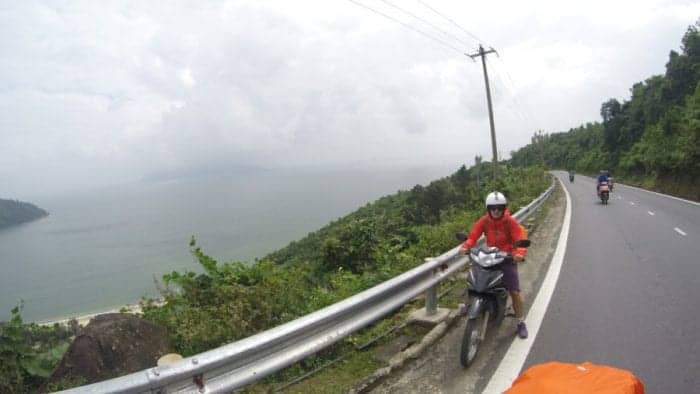 Riding the Hai Van pass might have been a little shorter than we wanted if any criticism can be bestowed on this perfect snake of tarmac. But what it lacked in length it makes up for in sheer beauty and history. Not only should you come here for the views, but this place is also a symbolic and strategic place of important. Traditionally the border between the Champa people and the Dai Viet above it was seen as a major land barrier for advancing armies and people. It is also seen as the border area between the climates of Vietnam, the south being generally warm and sunny all year round and the north having more well defined seasons…which we can attest too! 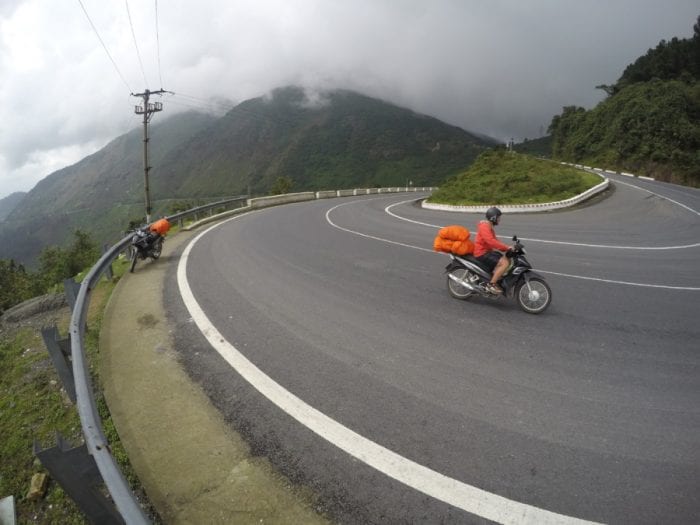 Riding on the vast and varied roads of Vietnam was a major challenge for us, who had never ridden a motorbike before. But its roads like this that turned us from novices into bikers with a passion for two wheels, in the future we foresee many more adventures on bikes and when we do settle we will be getting a couple of bikes for certain! 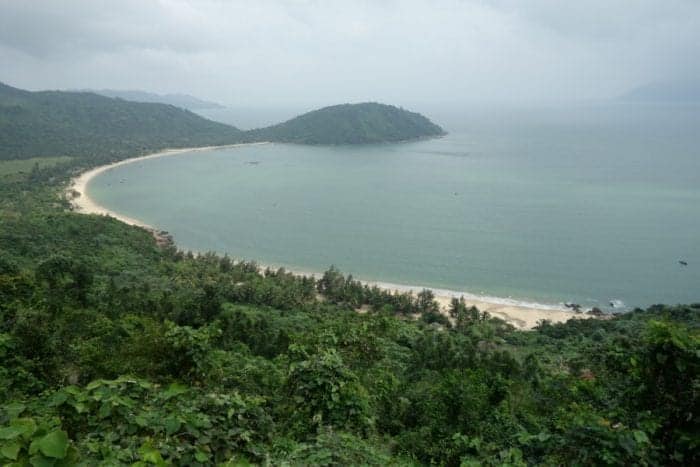 Other great riding in the area:

The Hai Van pass was for sure one of the highlights of riding through Vietnam, a road that felt like it was made to be ridden on two wheels. But it is by far not the end of the amazing riding in this region alone. Whilst in Hoi An we headed over to the nearby city of Da Nang to get our 1000km mark oil change as per our agreement with Tigit (who we bought the bikes off and sold them back too). Whilst there we met a nice chap from Alaska who had been riding bikes for 50 years. Being retired he was taking his time touring the country and had been in Da Nang for 3 months, exploring all the riding potential the area had to offer, it was safe to say he was taken with the city! 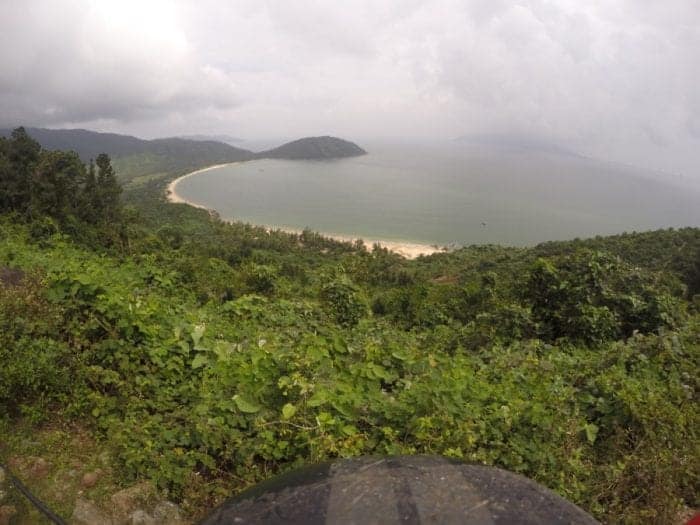 We decided to have a few nights in Da Nang itself and meet up with Bob for a ride. We had an amazing day of riding and really on that day fell in love with motorbiking. No longer where we just using the bikes as a method of transport but instead we were now going on on them for fun, the thrill of zipping around corners and weaving around bends had turned us into bikers with a passion for the road. The mountain of Da Nang proved to be a perfect place to spend the day riding, near perfect roads snaked their way up and down the peaks with no one to be seen for hours. Views over the perfect blue waters and rich green forests were only punctuated by the monkey infested concrete road that allowed us deep into this wonderful terrain! Da Nang is a city with miles and miles of amazing and quiet roads to explore as well as having a chilled out and relaxed vibe in the city itself.

How to experience this amazing road yourself!

The only way to truly experience the Hai Van pass is on a motorbike, whether than be manual or just a scooter, getting out on two wheels and feeling the curves, leaning into the perfect tarmac on the bends and stopping whenever and wherever you are to take photos and take in the stunning scenery is what it is all about.

Watching that Top Gear episode all those years ago was what made us want to bike the full country, from Saigon to Sapa, over 2500 miles. But the part that got us in the first place was the Hai Van Pass, it’s a motorbikers heaven!

The Hai Van Pass is situated between the cities of Da Nang (near Hoi An) and Hue. It is roughly 65km to travel between these but the Hai Van pass is only around 20km long, meaning if you wish you could cross there and back in a day. 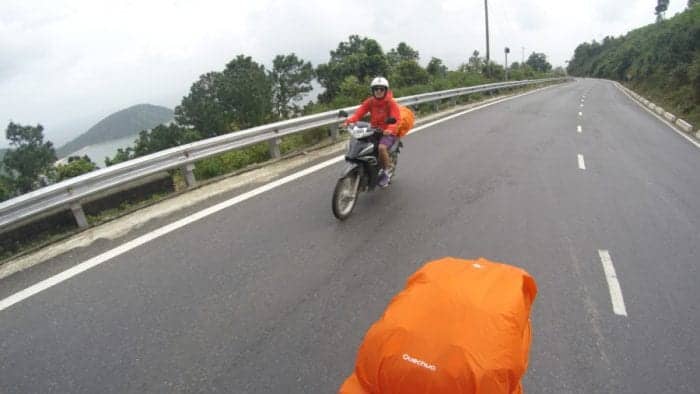 Renting bikes from anywhere in Vietnam is simple and easy, it usually costs around $5 and there is often no questions asked. You won’t fail to see signs for rentals all over Hoi An, Da Nang and Hue. Filling a full tank, which on our Honda Blades was 3L and got us 120km cost between 30,000 and 40,000 Dong, that’s around £1-1.50!

Go on a tour

If renting your own bike out feels a bit too risky or out of your comfort zone. Fear not! All over Vietnam you will see “easy rider” tours where you can jump on the back of a big comfortable bike ridden by a seasoned professional. You can take these either as day trips back to your original destination or as a method of transport from Da Nang/ Hoi An over to Hue. You can even take them on multi day tours through some amazing areas of the country to get that feel of biking without the danger of going it alone!

Have you ever ridden on such an amazing road?

What an awesome way to tour around! My knees always get sore on a bike, but who cares…so worth it.

It’s the best way for sure to see any country in more detail, I was sore on the first few trips but got used to it after a while!