After an epic day in the Carpathian Mountains we were offered an opportunity to venture to the legendary Transfagarasan highway deep in the Transylvania peaks. In what turned out to be a 12 hour road trip through the Romanian countryside, visiting the most breathtaking scenes, witnessing local life and hiking to the most amazing summit we could ever imagine! This unexpected adventure is exactly what we love about both backpacking and Romania! A day we will never forget!

An out of the blue adventure

What we loved so much about this adventure what how much of a serendipitous occurrence it was. We had been researching into visiting the Transfăgărășan highway but had to come to the realisation that doing in ourselves on public transport was probably not going to come off, and without a credit card we couldn’t rent a car ourselves. 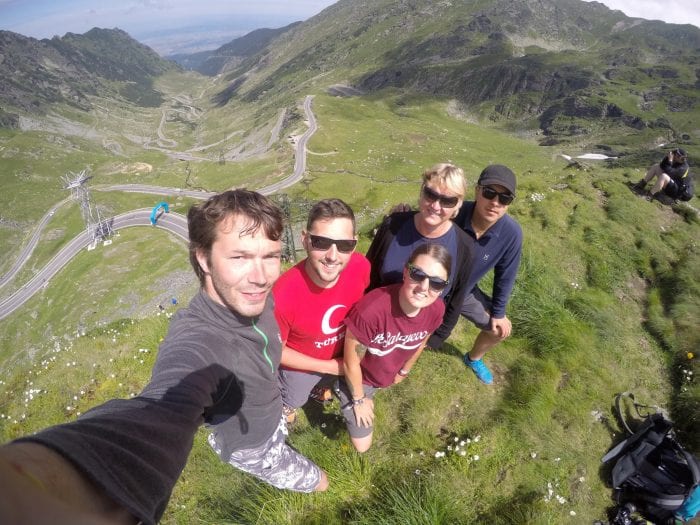 But as if by some sort of magical chance just as we walked back into our dorm after a day out hiking in The Carpathian Mountains as were approached by two other travellers. Now this is why I swear by staying in Hostels too, because there is a community and social spirit that always seems to lead to opportunities for adventure and new experiences. Jorda from The Czech Republic and Emiliano from Chile asked us if we would be up for joining them alongside a Jodie from Australia… of course, we said yes and jumped at the chance in front of us! 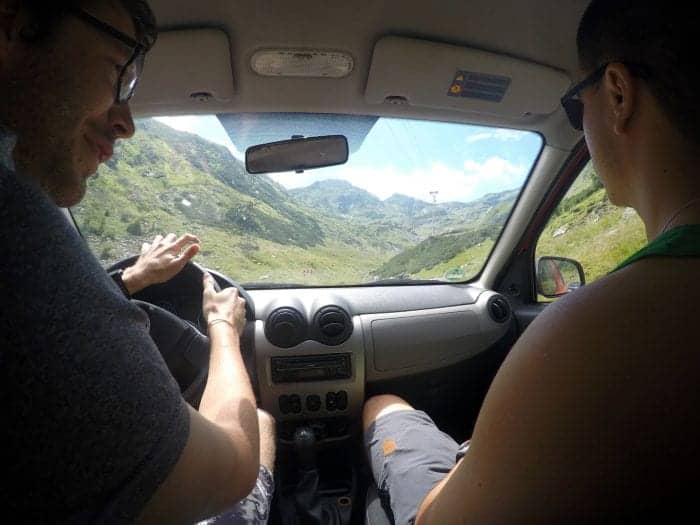 Only just making it on to the Transfăgărășan Highway

So off we went, a car full of strangers on an adventure of a lifetime. Heading up to the Transfăgărășan highway from the lower route with the intention of taking the longer and winding higher road back over to Brasov. As we wound our way through the ever growing peaks of the Carpathian Mountains we began to encounter a lot of traffic and increasingly road bikes with support crew just behind them.

We grew suspicious about exactly what was going on here, until we reached a road block covered with bikers and their crews, only to be informed that the road (still a mile or so away up the winding track) was to close in 15 minutes for a road race!! Now we were racing the clock to get up there! 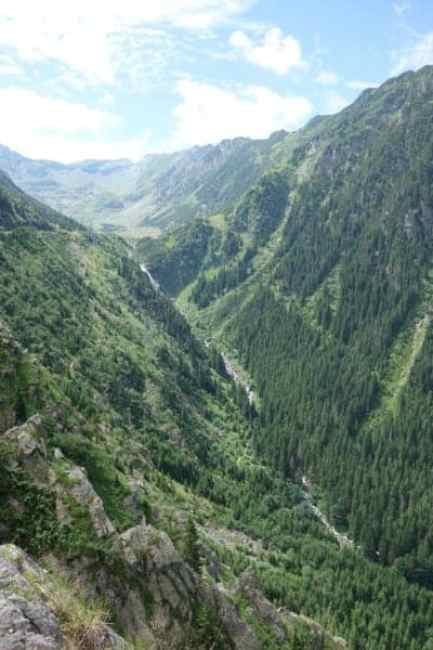 An unexpected opportunity at The Transfagarasan Highway

Luckily we just slipped through the upper road block a few moments before this amazing road closed. The result was this usually busy stretch of road was completely empty. We drove smoothly through the magnificent bends, swung around the s-curves and drifted around the chevrons. Even as passengers in the car we could appreciate how amazing and unique the driving was here, a masterpiece cast in asphalt and set deep in the mountains. 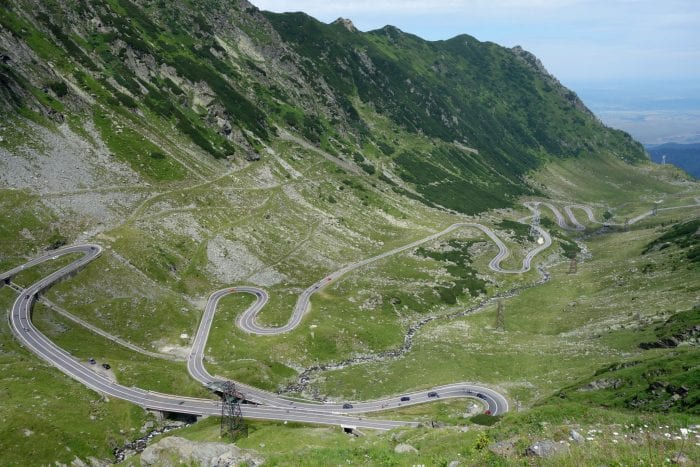 As we reached the pinnacle of the road and pulled in we not only got to experience this wonderful location, but just as we got to the panoramic point the road race began! As a fan of cycling due to the races my Grandad would take me to as a child, this was second only to seeing the Tour De France a few years ago. 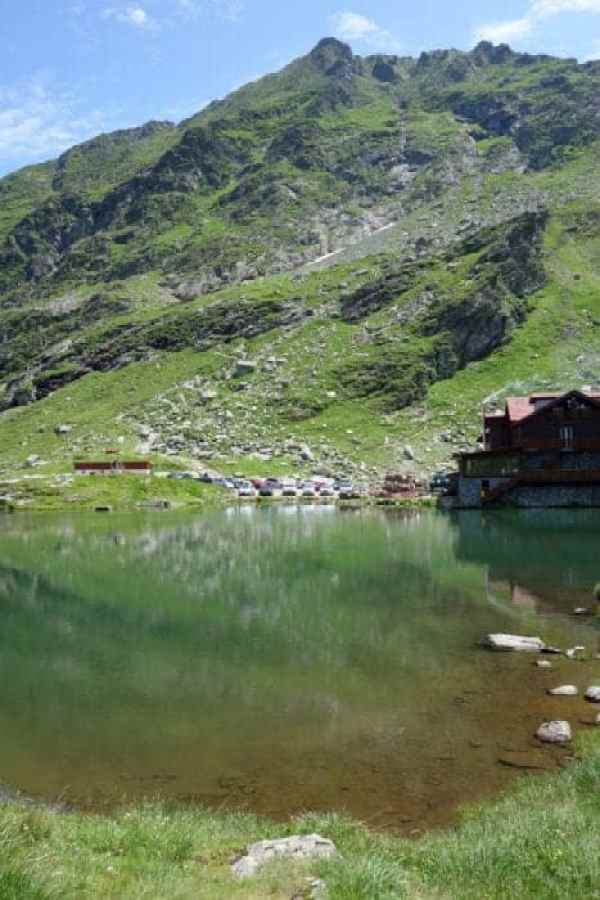 There was an electric atmosphere here, people waving Romanian flags, jingling cow bells and whooping and hollering at the cyclists as they pushed through the steep bends! Quite a sight and an unexpected experience! 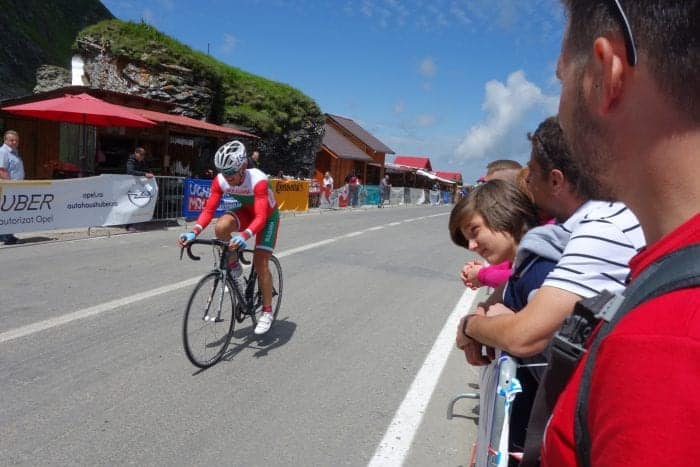 Standing up here, looking down on the snake like trail of tarmac winding its way through the green valley was even more magical than I ever imagined it would be. This twisting serpent of a highway, created in 1970’s by the eccentric communist leader Ceaușescu was not only a military route but a tool of propaganda in which to show the power and might of Romania. 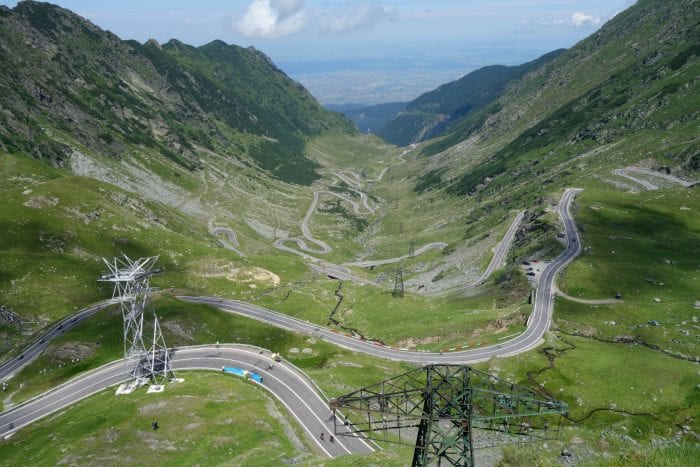 But today, sitting at an elevation of 2,042 metres (6,699 ft) it is better known as “The best road in the world!” From this vantage point you can see why. Sitting here we could have stared down at these wonderful hairpins for hours. 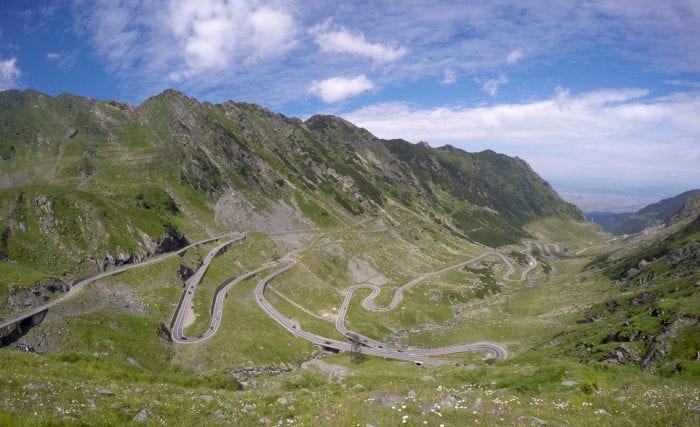 A hike to remember over the Transfagarasan highway

To make this idyllic and almost perfect setting even more stunning just above the highway sits the glacial lake of Balea and a wonderful horseshoe of peaks, some of the highest in this region. We decided rather than just take in the scene from this angle we would tackle the mountains surrounding us and gain a higher perspective on this area. It was too tempting not to attempt the hike! 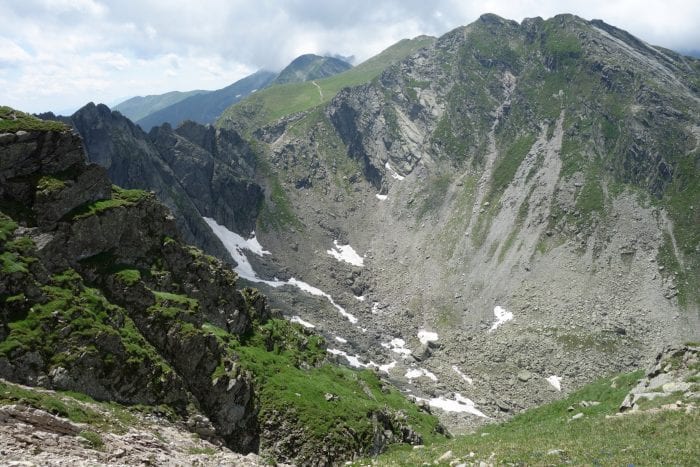 After 2 hours of steep trails winding their way across several peaks on each side of the huge range that stood above the lake we finally reached the peak. Now we could see the entire Transfagarasan highway! 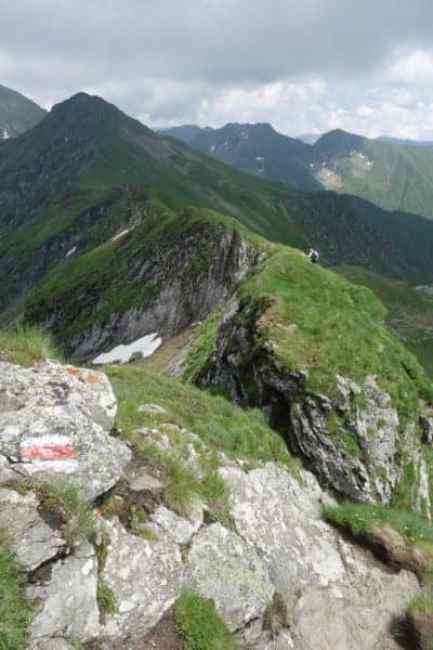 Hiking up the circle path to the pinnacle of Lezerul Caprei at 2418m / 7933ft for a magnificent view that can only be rivalled by those we saw in Switzerland, we found ourselves in the heart of the Carpathian Mountains for the second day in a row. The jagged peaks around us seemed to go on for miles and miles, the sheer natural beauty left us awe inspired. 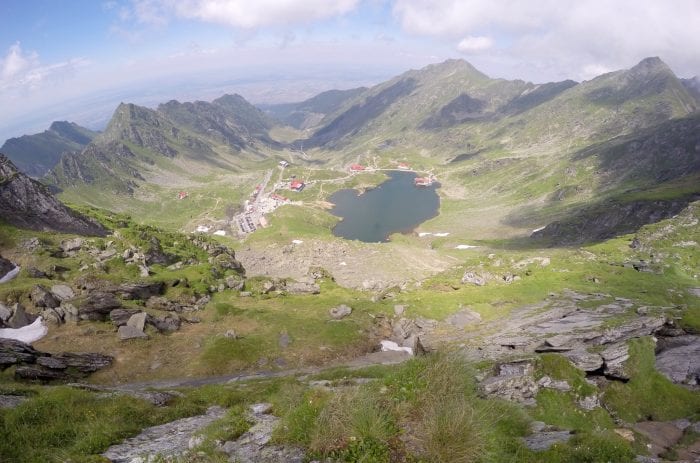 But despite the 360 panoramic views we found ourselves at the centre of, the reason we hiked up here, to our highest summit, was to take in both the  Transfagarasan highway and Balea Lake in one amazing picture. The view of this magnificent and beautiful place is one of the most impressive we have ever had the privilege of taking in. This was the culmination of one of the most unforgettable days of our lives and certainly of our backpacking trip around Eastern Europe. 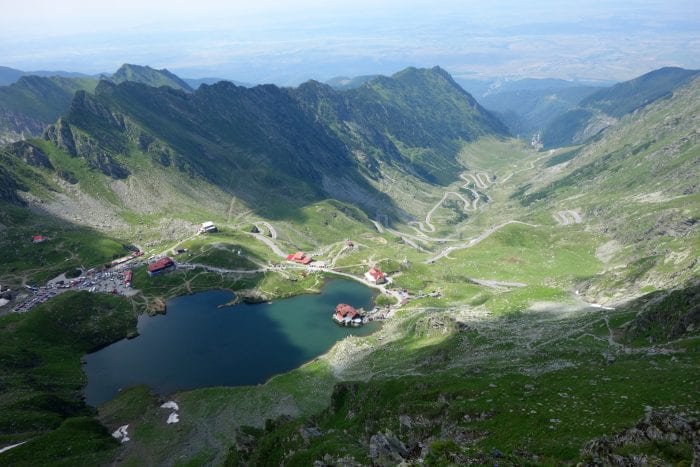 12 hours on the road exploring Transylvania

What a day, and a long one at that! All in all we spent 12 hours on this magnificent road trip. Setting off as strangers from 4 different countries we ended the day as close freinds with memories that will last a lifetime. 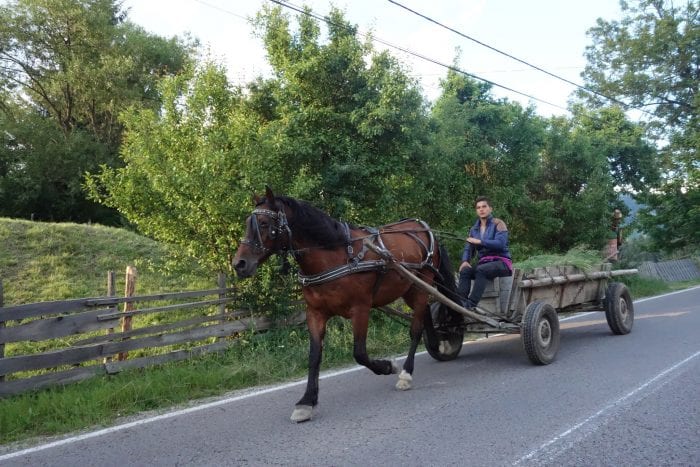 What made it even more special was that fact that only the day before we had no idea any of this would even happen. It just makes us even more in love with backpacking and the crazy opportunities surrounding yourselves with other travellers presents you with. 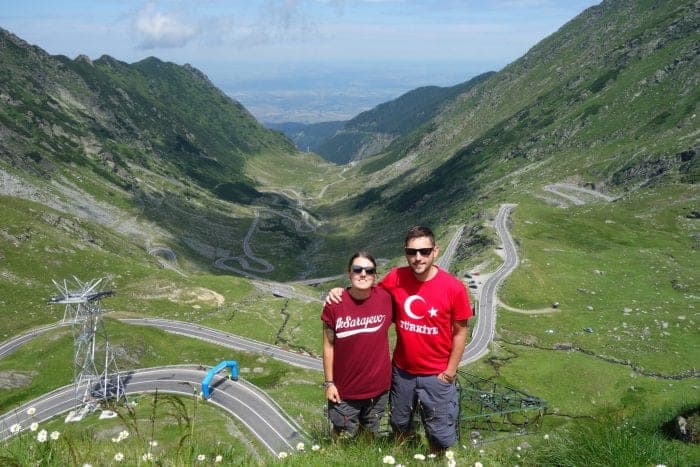 Of course, the Transfagarasan highway, the Balea Lake and the magnificent hike was the highlight of the day. But for me another thing that I really loved was the journey though the tiny villages of Romania, the fields full of the traditional hay bales, the stalks making huge nests on the power lines and the gypsy culture being kept alive with the many horses and carts still in use. 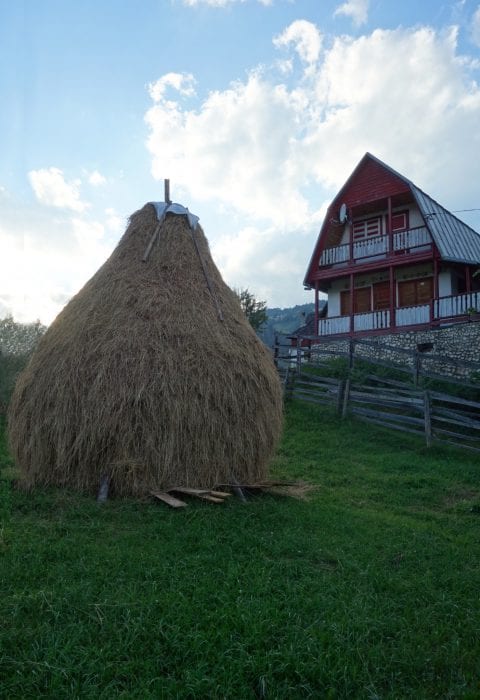 Seeing the beautiful houses and rural ways of life that still exist in this stunning countryside was a treat, we also drove into a few villages, got the car stuck and got some strange looks!! But all this just confirmed that Romania is one of our all time favourite countries in the world, we fell head over heals in love that day with a country we already thought highly of! The Transfagarasan highway was just the icing on the cake! 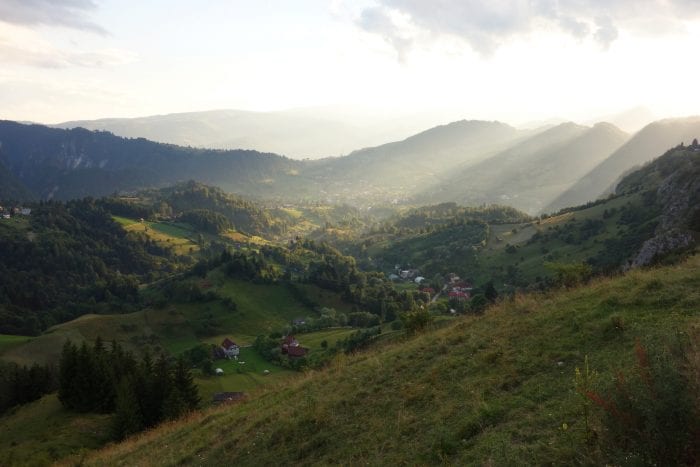 Have you ever had such an unforgettable day of adventures in such an amazing location? 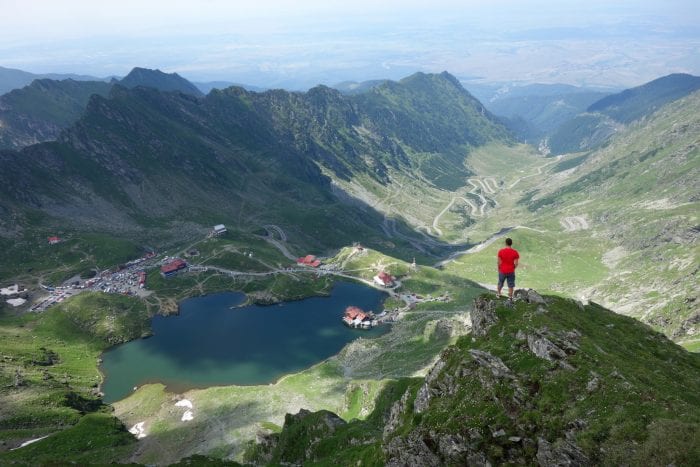 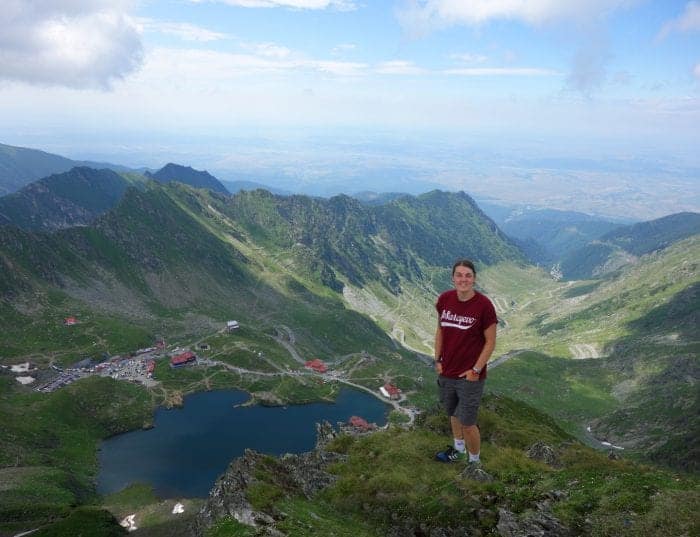 See more from this region

This story just summed up everything that’s awesome about traveling. These sudden opportunities, surprise gems of experiences, stunning landscapes and most precious of it all – the people connections! Loved reading this and not surprising that this highway is called the best one in the world!

wow…!! what a journey , nice photography , awesome place.., thank you for sharing this.

Thank you very much

I could rent a car in Romania without a credit card. That was in 2015.
But I used a local agency, not one of the international chains.

Hoho, so many adventures in one day! And how spontaneous! Photos are beautiful and of course, who could not be tempted to go for a hike with all this surrounding!

Thanks!! It was such an amazing day for sure!!

Epic shots! My grand dad grew up in Transylvania – no he was not a vampire LOL – and it looks to be a gorgeous place! He had so many fun stories about his childhood there when he was alive, talking about the wacky stuff that happens in a Communist, pretty dang poor country it was during the 20’s and 30’s. Amazing pictures guys. Thanks for sharing 🙂

Thanks Ryan. Oh wow that is really cool and amazing to lean about this place from your Grandad! It is such an interesting and beautiful place to visit, one of our all time favourites!

Romania only became socialist/communist in 1947.
Before that, it was a kingdom and ruled by a fascist allied with the Nazis.

Very true Andreas. I wasn’t even aware of the timeline. Thanks much for sharing that 😉

0
Reply
The Roaming Renegades
Reply to  The Common Wanderer