When we decided to head over to Adelaide from Melbourne, an 8 hour drive, one of the biggest questions was why? It seemed that even most Australian’s had no idea what this off the beaten track state capital had to offer and hardly anyone of the fellow backpackers we met had ventured that way either! In truth we had no idea either and it was sheer luck that we had made so many friends whilst travelling that were from Adelaide and that I also had a cousin who lived just outside the city who I had not seen in 17 years! When we arrived we had no idea how much we would fall for this small but perfectly formed city, for us it is now second behind our Australian home of Melbourne. It has perfect weather all year round, small enough to explore on foot, close to the beach, Mediterranean rolling vineyards, incredible coastal walks, wonderful hidden gems and just the perfect vibe of happening but not overrun! Here are our best things to do in Adelaide!

So, what are the best things to do in Adelaide?

It’s unique Australian history which left behind a beautiful city

Wandering around Adelaide you would be easily forgiven for thinking you are in Europe, as with Sydney and Melbourne the city might surprise some first time visitors to Australia with it’s historic and beautiful architecture. A stroll down North Terrace greets you with grand old buildings such as the University, Parliament House and Adelaide’s main train station. It has that air of timeless elegance an London or Paris street would be envious of. Wandering further around the square set of the city reveals yet more stunning facades and historically important buildings, many around the recently redeveloped Victoria Square and Town Hall, complete with a statue of the Queen just like any English city! A highlight is the high street on Rundle Mall which really does bring together the old and the new side of the city. 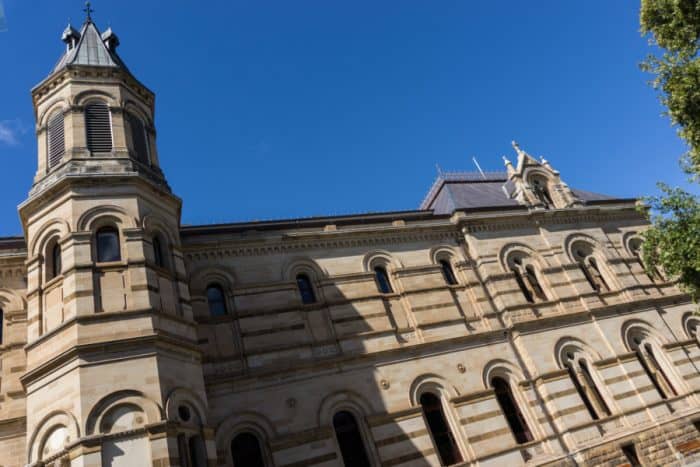 Adelaide’s history is closely related to the higher classes of England, you may notice the typical Aussie accent in these parts is particularly toned down and positively  well spoken English sounding! The first time we met our good friend Sean whilst backpacking in Romania (who kindly let us crash at his place, cheers dude!) we only heard his voice from the next room, we pondered between ourselves whether he was in fact a Brit who has spent an extended period of time in Australia! Laughing it off as an Adelaide thing he then told us that the reason for this is because Adelaide was one of the only cities not settled by convicts and instead by the upper classes! Just wandering around this perfectly sized city is one of the best things to do in Adelaide. 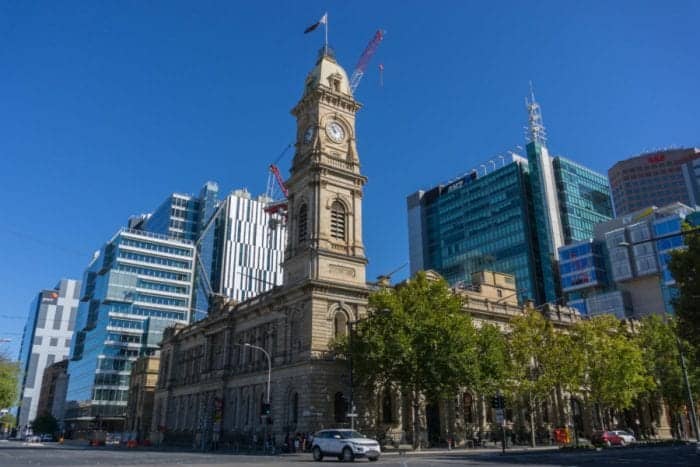 By the standard of Sydney and Melbourne, Adelaide is a small and compact city more along the line of many European cities and compares very well in size to our home city of Manchester or Liverpool. The layout is in a grid set within a square surrounded by lush gardens and the river. This means it is easy to get around on foot, crossing the entire CBD takes around 30 mins and the layout makes anywhere easy to find! There is a saying in SA that anywhere in Adelaide takes just half an hour to get to, and it’s true! Whether walking around the CBD on foot or driving to the beach or hills, everything is within 30 mins! So that also means getting accommodation in Adelaide cbd is easy and ideal for exploring the area 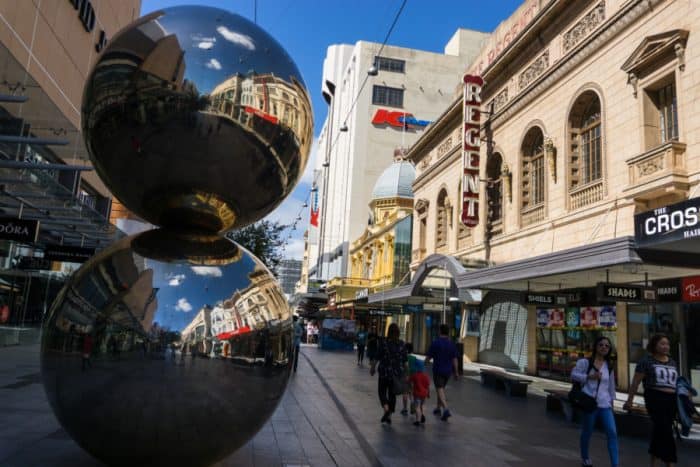 Local beaches such as Gleneg and Henley

Adelaide is close to the coast as with most of the urban centres in Australia. This means that combined with its wonderful Mediterranean climate there is always somewhere to cool off on a beautiful sunny day. The cities most famous beaches are Gleneg and Henley, both easy to reach from the CBD with dedicated tram, train and bus routes and of course, it only takes 30 mins to get there! Around Adelaide there is some great surf too and many of our friends in the city take advantage of how close everything is to go for a morning surf each day before work, what better way to start the day and a must do on our things to do in Adelaide list! 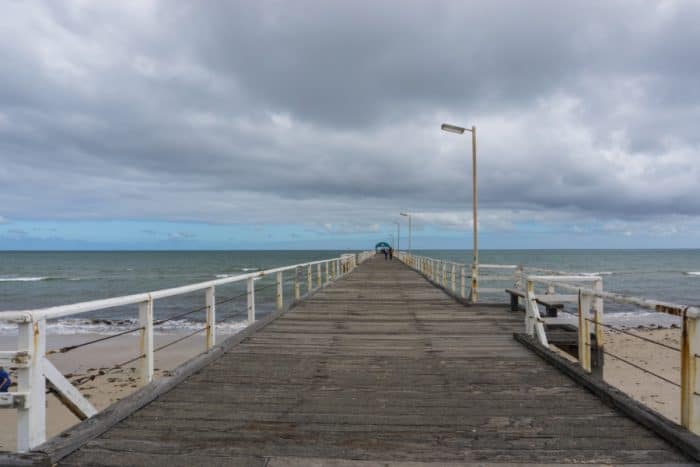 Having a wonderful Mediterranean climate and a sea breeze has made the hills around Adelaide perfect for wine making for generations. The regions of Barossa Valley and Mclaren Vale produce wine famous around the world, including Jacobs Creek. The majority of the wineries offer free tastings set in lush rolling vineyards that could be mistaken for Tuscany, what could be better? 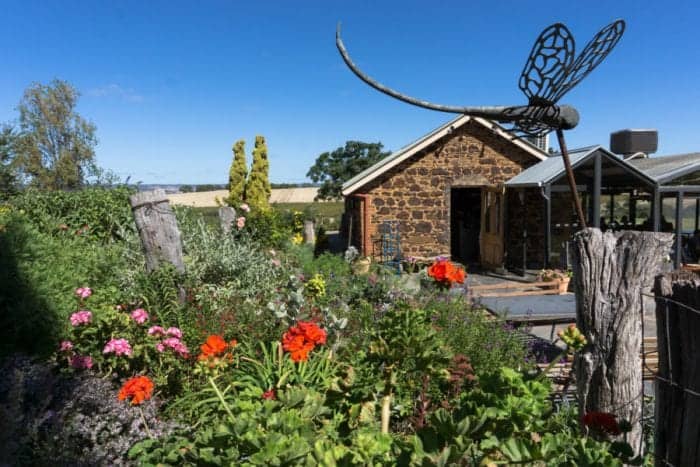 Barossa Valley is the better known regions of the two and is home to most of the globally exported wines, if you could call anywhere in Adelaide a tourist destination then this would be it! However we chose to visit the lesser known Mclaren Vale with some of our friends from Adelaide, this region is more of a local hang out and is even more scenic if that’s possible. If there is one thing you do outside of the city from our things to do in Adelaide guide, it has to be seeing the wine region. 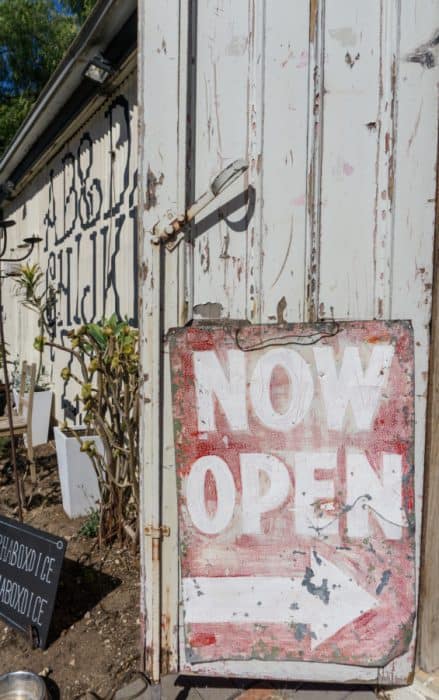 It offers wines from higher end producers such as Coreole and also from newer hipster wineries such as Alpha Box and Dice to cover all spectrums and to ensure there will be somewhere you feel comfortable whether you are a connoisseur or a first timer! Just make sure to organise some transport using one of the local mini van services, get a friend to drive or stay at one of the local campsites! 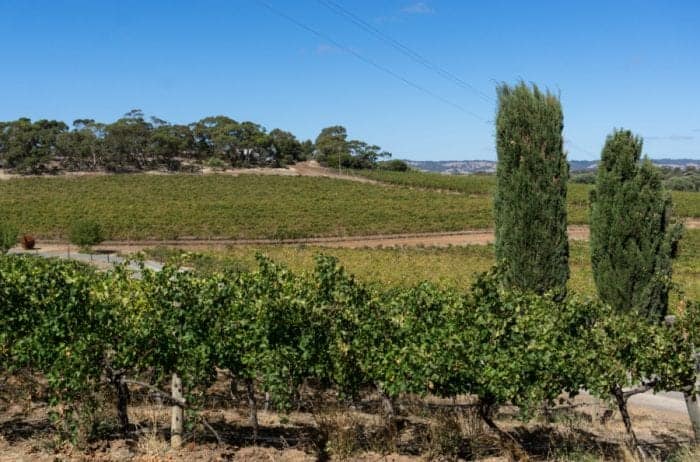 Beautiful coastal towns such as Port Elliot and Goolwa

Another 30 mins outside of the city towards the coast and you come across the wonderful region of Goolwa, Victor Harbour and Port Elliot, the latter a favourite of ours. Each one a lovely quiet and quaint coastal town with a sleepy village charm to them and beaches often only dotted with locals. On our things to do in Adelaide list, heading to these wonderful villages is a must do. 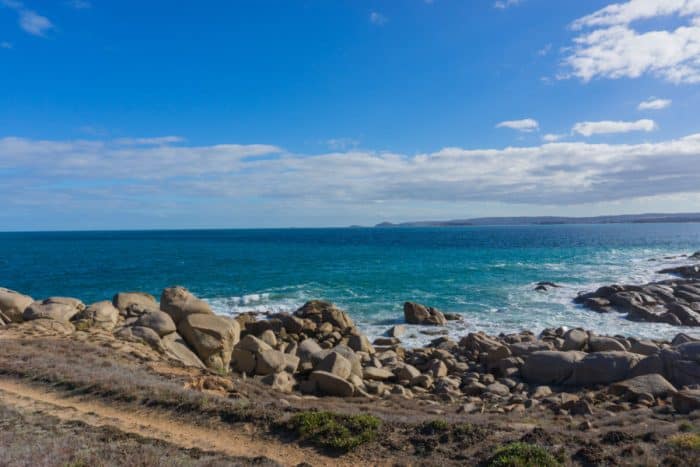 Port Elliot is a small place but it makes up for it in beauty, the harbour offers a wonderfully sheltered beach in Horseshoe bay and across the way is a stunning coastal walk around to Rocky Bay overlooking the azure waters of the region. After a walk and a swim there are many locally owned cafes and shops to visit, be sure to stop off at the famous bakery for a pie and a lamington! 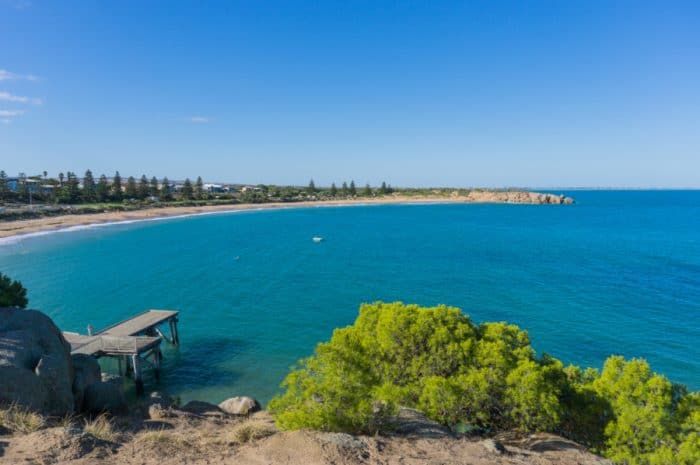 Discover the German village just outside of Adelaide

Now you’ve been tricked into thinking you were in England, then Italy, its time for even more European influence in the quirky village of Hahndorf, you guessed it, around 30 mins into the hills from Adelaide! Hahndorf was settled by Lutheran migrants, many of whom arrived on board the ship “ Zebra” on 28 December 1838. The town was named after Dirk Meinerts Hahn, the captain of the ship and Dorf meaning valley in German. 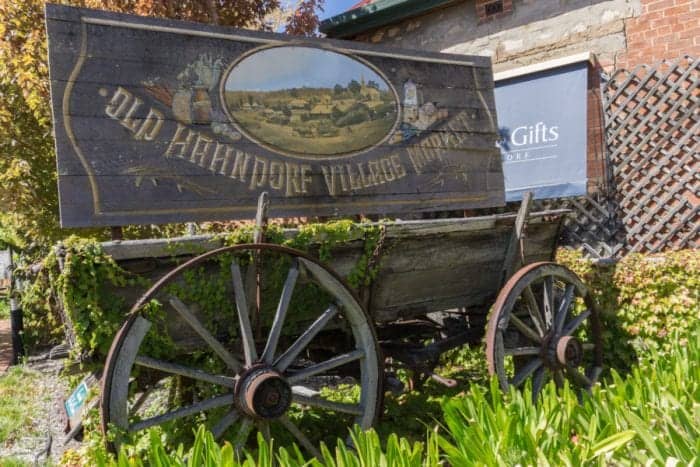 Today it is Australia’s oldest surviving German settlement and wandering around its beautifully kept streets is like stepping back into 19th century Bavaria! The architecture here is in the traditional fachwerk or Timber framed style of Southern Germany, the tricolour of Black, Red and Gold can be seen flying in the Australian sun and many of the cafes and pubs sell German cuisine and beer! 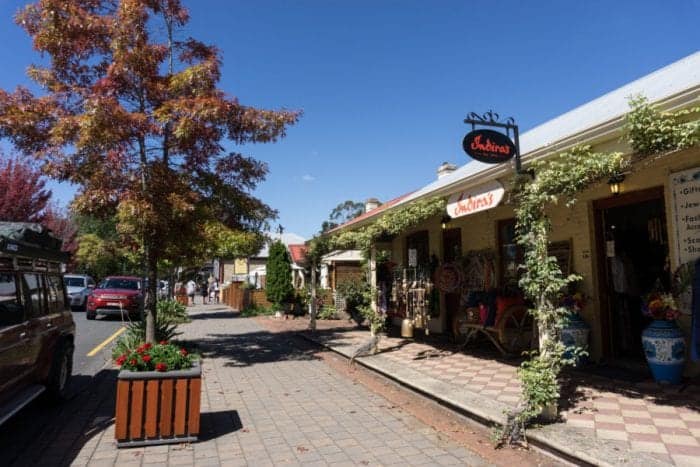 Hahndorf really is a charming and rather surreal place to visit in the hills of Adelaide, Bavarian music and the smell of Bratwurst filling the air and shop windows display their nutcracker dolls and lederhosen, it has to be seen to be believed and a perfect day out of the city on our things to do in Adelaide guide. 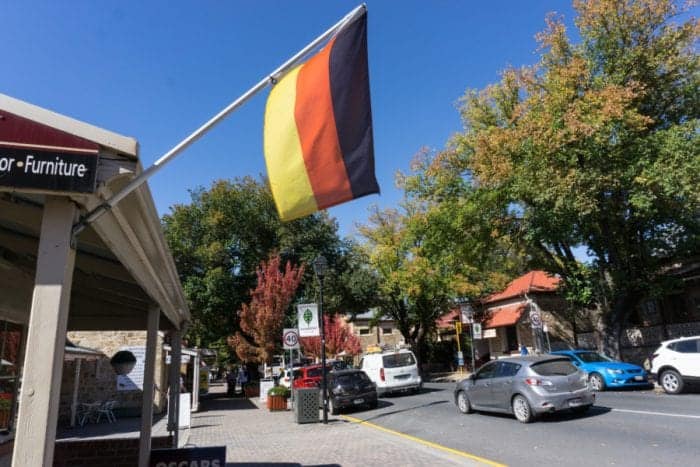 Adelaide seems to effortlessly combine that trendy and happening coffee culture and hipster vibe without being full of itself. It has that perfect combination of youthfulness and reserve that give it this special vibe that is often a little over done in Melbourne and over in Sydney they seem to try a little too hard to capture that! Coffee and brunch, cycling around the city and buying artisan products at Adelaide Central Market before spending an evening at the amazing art galleries, theatres or just having a few pints at the Exeter and a gyros on the way home (Vegan is available too of course!) Exploring the coffee and bar scene is a must do on or things to do in Adelaide list. 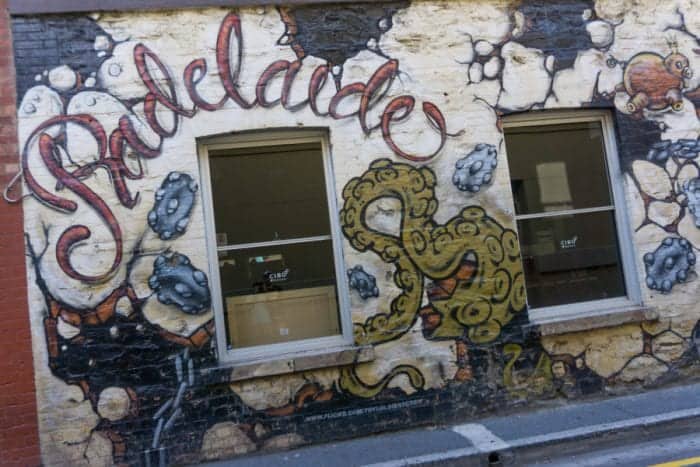 How uncrowded and off the beaten track it is!

The benefit to Adelaide being a lot less visited is that is it a lot quieter and more relaxed than many other state capitals. Tourists are few and far between and you are much more likely to have the beauty spots to yourself or share them with a handful of knowledgable locals. The traffic in the city is also very minimal, especially compared to the chaos of Melbourne in the morning! Adelaide being a small city too means that it seems to have just the right amount of people to feel lively but not over crowded. 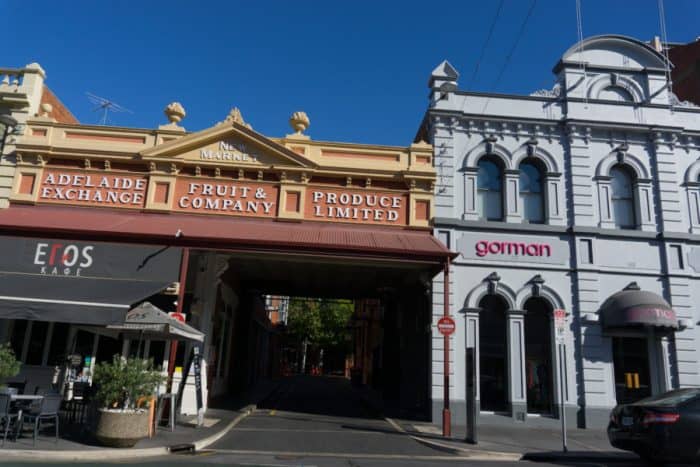 Other awesome places we didn’t get to visit this time

There are many places to see around Adelaide, more than we had time for on two visits. In the future we would love to head over to Granite island just off Victor Harbour which is accessed by a horse drawn tram. Also the wonderful Kangaroo island which is reportedly one of the most beautiful places in the entire country, but it does require a good few days to explore properly and an expensive ferry ride. We would also like to explore the Flinders ranges, Yorke Peninsula and Port Adelaide next time! 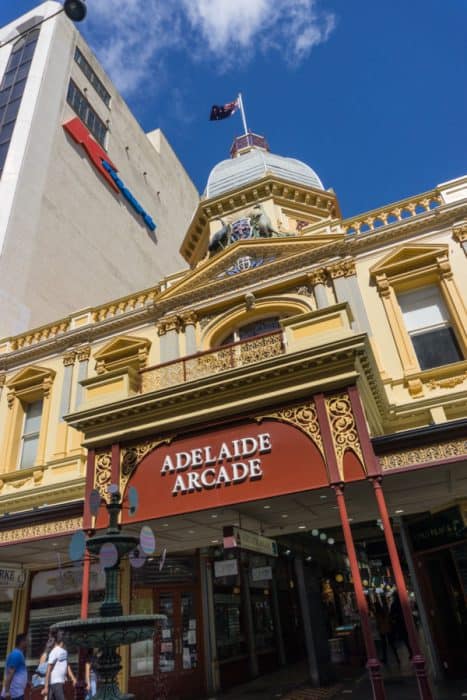 Have you been to Adelaide? What did you love about it?