Tirana was our first stop in the mysterious land of Albania in what turned out to become an 11 day love affair. But we must be honest, Albania wasn’t love at first sight! Tirana is a strange and fascinating city, one which feels large, modern and bustling. But yet also trapped in time and still retaining tale signs of a communist past; notably huge monuments towering over the frayed infrastructure below and the poor population. The city revealed itself slowly to us, but after a few days of wandering we grew to adore the lovable rogue that is Tirana!

Hidden in an unassuming residential area of this city the colossal bunker built in the 1970’s by the dictator Enver hoxha is now open to the public as Bunk’Art. Here you can descend the depths into the strange and often unnerving world of Communist Albania. The sprawling building can be explored in the summer and now over 40 rooms on more that 5 floors are open to visit. The exhibitions in each room provide not only a glance into life in the bunker and its purpose but also a timeline of events in the history of this secretive country! 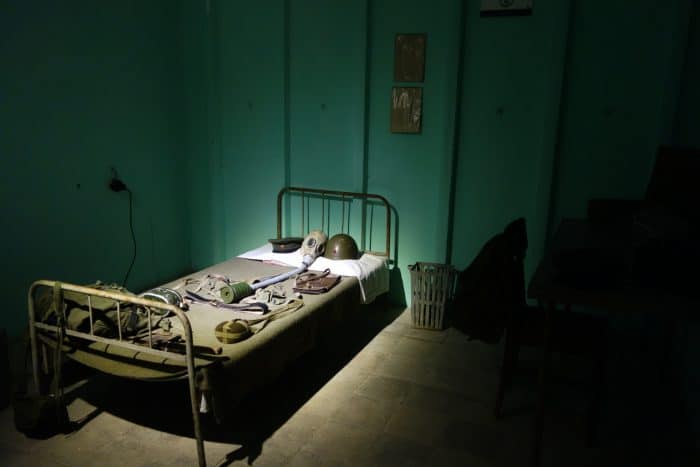 When heading to a country with the communist history of Albania you are often never sure just how much of its past you will be able to discover. But here in the National Art Gallery of Albania the permanent collection houses hundreds of examples of the countries Socialist Realism works from this period. Here you can marvel at the propaganda artworks created to inspire a country into labour and alignment. Personally, as an artist myself with a fascination with communism, this style is one of my favourites! Also, try to sneak a peak around the back too (it’s not really allowed but you can get in if you don’t let the security guard see you!) we found several statues of Lenin and Stalin! Strange that they are hidden here! 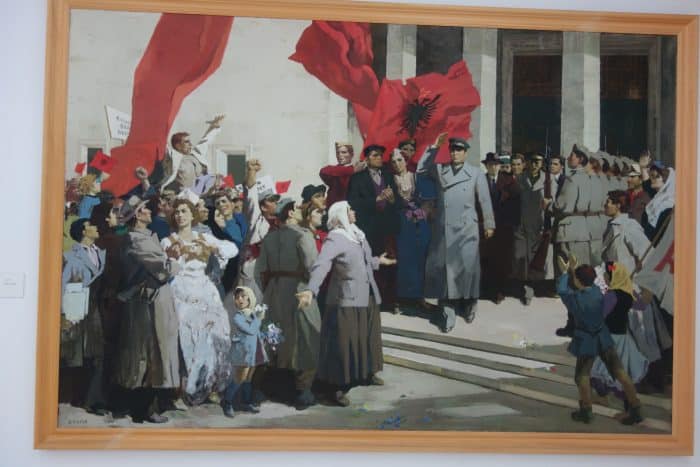 Discover the history of Albania

This huge museum sits in the main square of the capital, the impressive communist style mosaic depicting the eras in Albania’s history proudly on show. Opened in 1981 this 27,000 square metre building traces the history of this wonderful country back from its earliest beginnings to the fledgling modern society we see today. You can stroll around the many differing sections such as the Pavilion of the Middle Ages, Pavilion of Renaissance, Pavilion of Independence, Pavilion of Iconography, Pavilion of the National Liberation Antifascist War, Pavilion of Communist Terror. Each one transporting you back into a different but yet important era in Albania’s past! 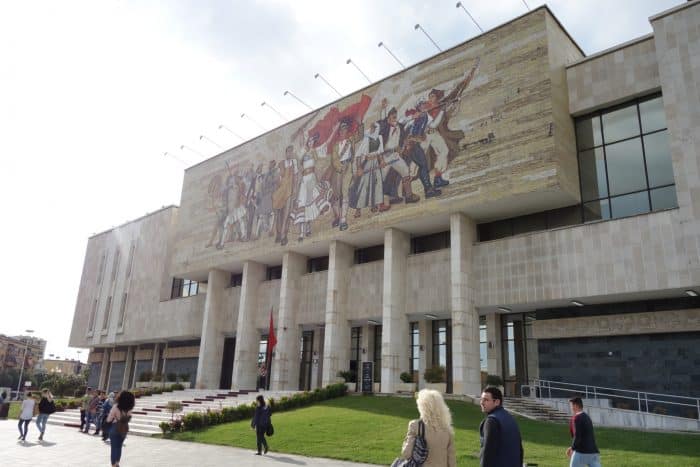 Skanderbeg Square is the main plaza in the capital of Albania, and boy does it live up to the billing. This dramatic open area is home to the huge Skanderbeg monument and what has to be one of the largest flags I have ever seen in my life. Here you really get the feeling of a country trying to balance the pride of post communist independence with the inevitable remnants it leaves behind. If anything represents that strange combination here is the place. It is also the scene of some of the most historically important moments in Albania’s recent history. From the floods of people “morning” Hoxer’s death to those who only a few years later ripped down the statues of him and Stalin that once stood here. 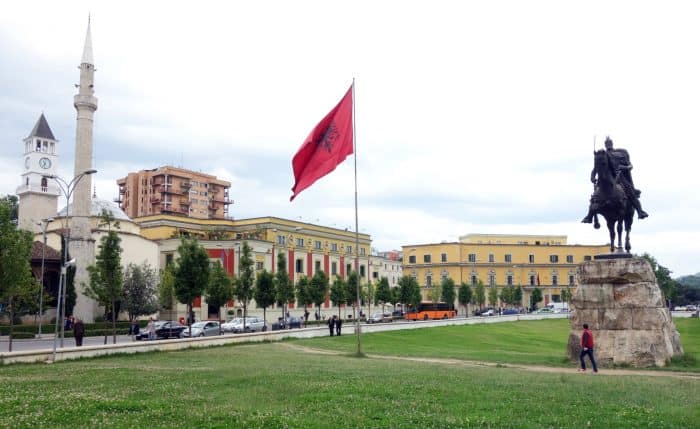 This 18th century mosque in itself is a beautiful artefact from the Ottoman era in the history of Albania. Inside the craziness of the street outside turns into immediate tranquility as you are surrounded by highly detailed and wonderful mosaics and paintings dating back hundreds of years. 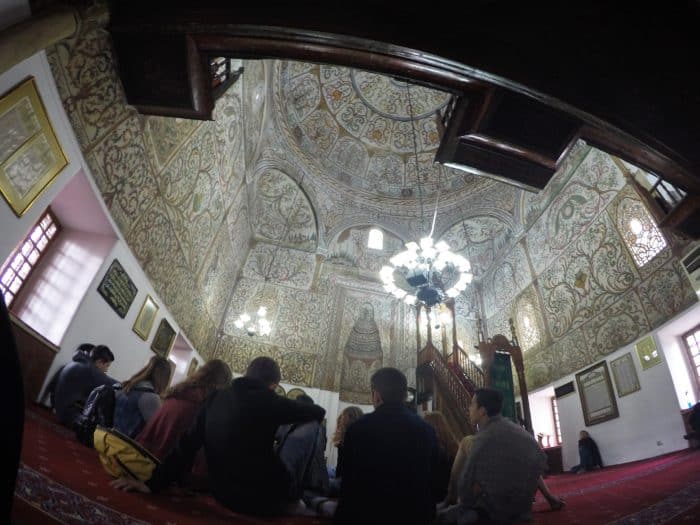 But that is not what this mosque is famous for! This mosque has become a symbol for the independence of Albania. Closed during the communist rule the building reopened for religious practice in 1991 without permission from the authorities. This rebellion against the rulers by over 10,000 people who marched inside and around the mosque carrying flags symbolised the beginning of the end for communist rule. The mosque therefore is seen as monument to religious freedom in Albania. 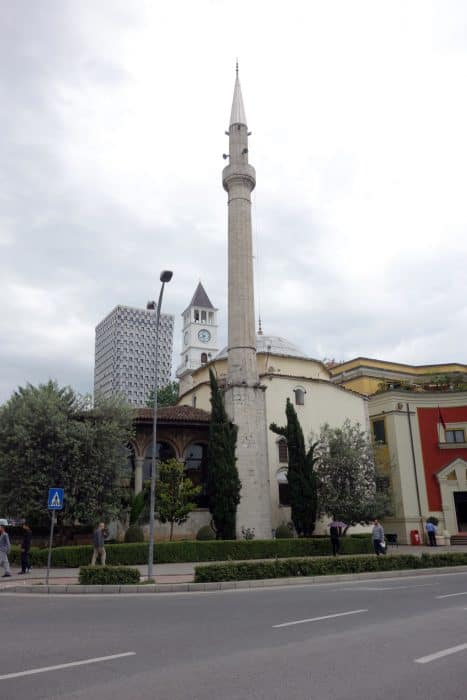 Get lost in the street markets

Tirana has a really unique feel to it when it comes to street markets, I can’t say I have ever visited (especially in Europe) a capital city which feels more like stepping back in time. All over the central areas you will find people selling all sorts of the most random items you could ever find. From old TVs from the 90’s to fresh fruit and veg. Even if you don’t buy anything it is fun to just explore the warren of markets, stalls, lock ups and well, people sat on the floor! Have a rummage through, you might just find yourself a bargain, or the most unique and strange souvenir ever! 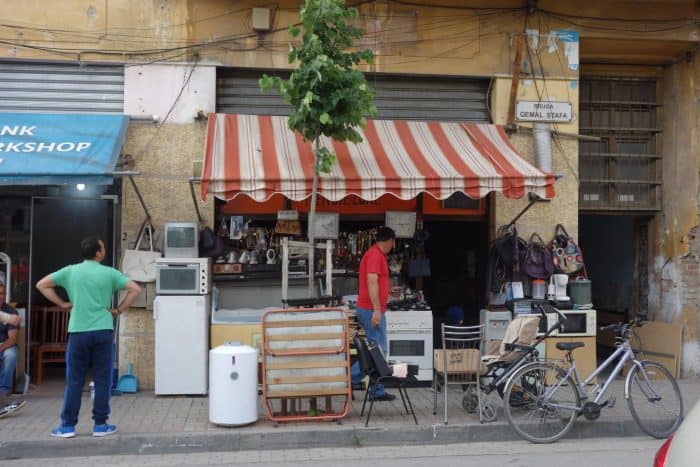 Stare at the Resurrection of Christ Orthodox Cathedral of Tirana and wonder what is going on!

Christianity in Albania isn’t the main religion and given the years of communist rule religion isn’t something that is practiced as intensely as in other Eastern European countries. So it is no wonder then that many of the churches in the country are quite new. This strange incarnation was only built in 2012 and consecrated in 2014. The style in which is it built seems like a modern take on Art Deco, but I am sure if you have ever played the masterpiece game that is Bioshock you can’t fail to see the similarities between the style and that of the underground dystopian city of “Rapture!” As a huge fan of the game I found this architecture to be quite fascinating! 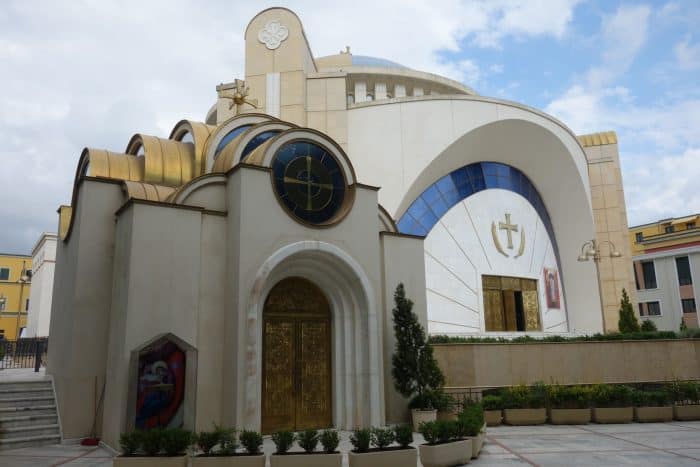 Wonder off the beaten track to the Enver Hoxha Pyramid

This now derelict former museum and exhibition centre is a piece of history many in the city are unsure what to do with. Designed by Hoxha’s daughter and son in law its original purpose was to be a museum to the “great leader” and was opened in 1988. After the fall of communism in Albania in 1991 the building has gone through several periods, being used for conferences, exhibitions and concerts. Now it lays as a crumbling and derelict remnant of the turbulent history of Albania. No one is really sure what will become of it, some would like it kept for its historical significance, others think destroying it and building something new in its place would be more fitting. Who knows, but this strange construction is worth a visit for sure! 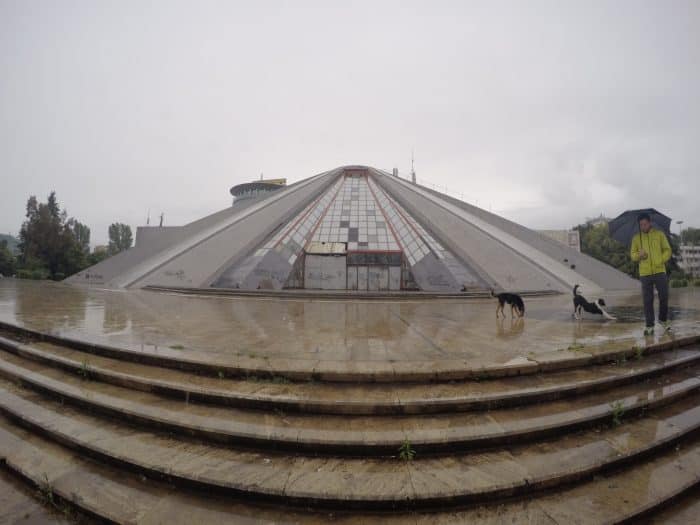 Step back in time on the Tanners Bridge

Much of the old Ottoman history of Tirana was destroyed under the communist rule and a modern city built in its place. But one location where you can literally walk in the footsteps of history is the 18th century tanners bridge. Strangely the bridge now doesn’t cross over any water but instead with the river being diverted in the 1930’s stands more as a historical monument. The bridge was part of road that once connected Tirana to Debar and was an important trade route for livestock. Now a days it is seen as one of the most important cultural heritage monuments of the city. 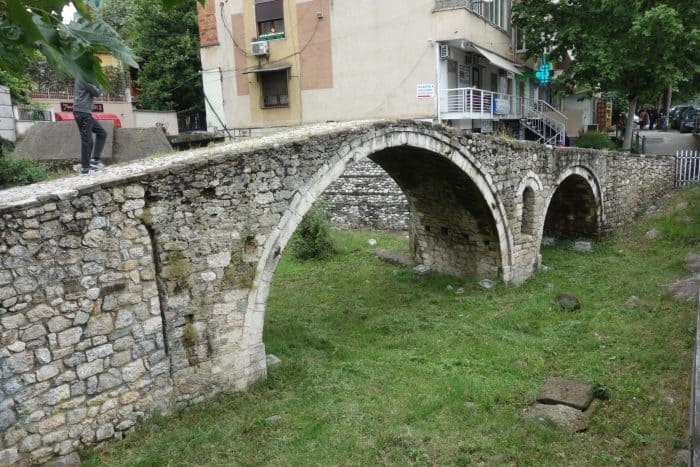 Tirana is deceptively small once you are in the central areas. The residential outskirts do appear to be sprawling but most of the main sights are well within walking distance.

You might however want to take one of the buses to locations a little further afield. The local city buses can be taken in the area surrounding the main square. But we warned, they have no timetables! Pick a bus that is the fullest and you will be on your way quickest! Prices on the buses are a standard fare however bought from a conductor who walks up and down the bus. They are really cheap too! 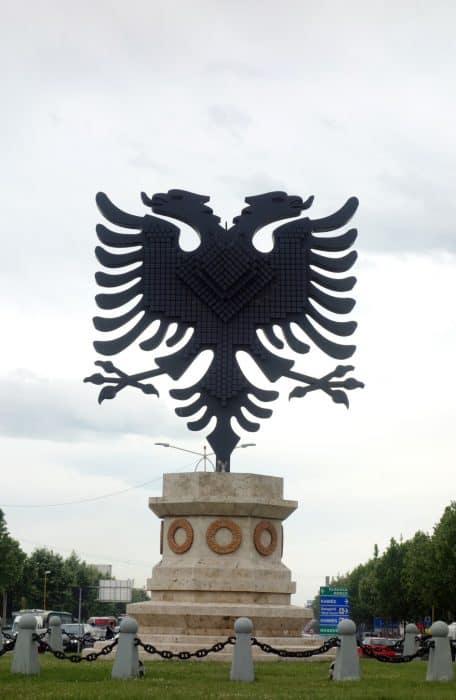 The city has 2 main bus stations to serve longer distance travel and they can be reached on the local buses quite easily. From here you can again take an untimetabled minibus (furgon) or coach to cities and towns all over Albania and also international destinations such as Skopje, Pristina and Kotor (3 of the places we travelled to or from via Tirana) as well as many others in the surrounding countries. 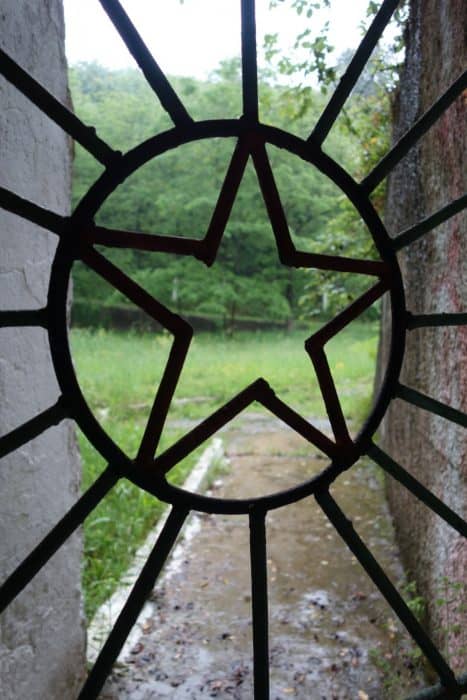 In Tirana we stayed in the wonderful “Trip ‘n’ Hostel”. Here you are close enough to all of the action that most things are only a short walk but at the same time in a lovely quiet neighbourhood. Here you can find a hostel where all your needs as a traveller are taken care of. Curtains on the beds, huge lockers, plug sockets next to each bed and a free breakfast. There is also a bar, huge lounge area, garden and rooftop chill out area! We absolutely loved our time here. 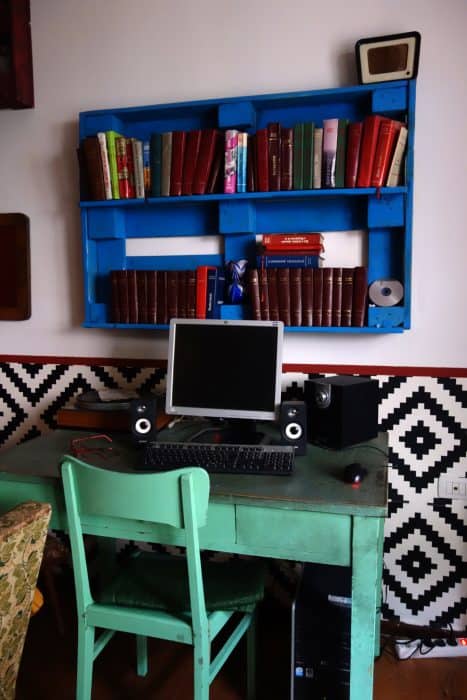 Read more about it here:

Have you ever visited Tirana?