Chiang Rai is a relatively obscure city in the north of Thailand, most people are only aware of it due to the weird and wonderful Chiang Rai White Temple, otherwise known as Wat Rong Khun on the outskirts of the city. After touring South East Asia you would be forgiven for thinking you’ve seen enough temples, you’ve visited ancient Burmese ones, shimmering Thai ones, the crumbling ruins of Angkor and seen the intricate Khmer designs and wandered around the detailed Chinese incarnations. BUT… You’ve never quite been to a place like this, part working temple, part work of art, it is a stopping off point well worth the extra effort! 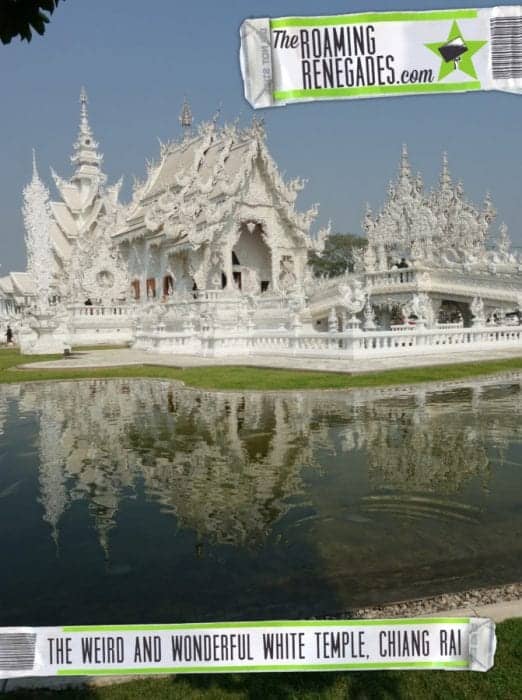 This amazing piece of artwork that has to be seen to be believed!

The Chiang Rai White Temple or Wat Rong Khun was created by artist, Chalermchai Kositpipat, who concentrates mostly on intricate paintings, sculptures and sketches of religious iconography with a mystical and colourful twist. As his work as developed over the years it has moved more towards a commentary on modern and western culture, It is of course THE temple to see in Chiang Rai. 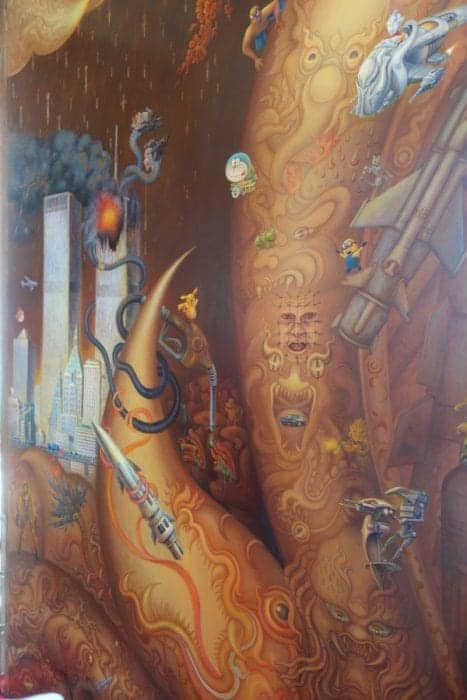 Often his work depicts heaven and hell, good and evil. He often uses iconography from popular culture such as musicians, politicians, even terrorists and common objects with loaded connotations such as coke cans floating through space as metaphors for these age old entitles and their existence in our world today. 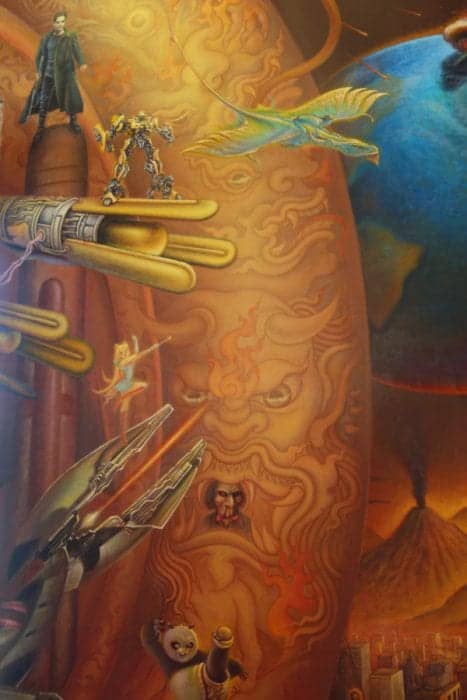 Much of Chalermchai Kositpipat’s most well known and important works can be seen in a dedicated gallery on the edge of the site. It interested me to note that many of them were familiar to me despite not knowing the artist by name before visiting here. Whether you are an art fan, interested in religion/ buddhism, politics or popular culture you cannot fail to see the sheer beauty in his works at The Chiang Rai White Temple. 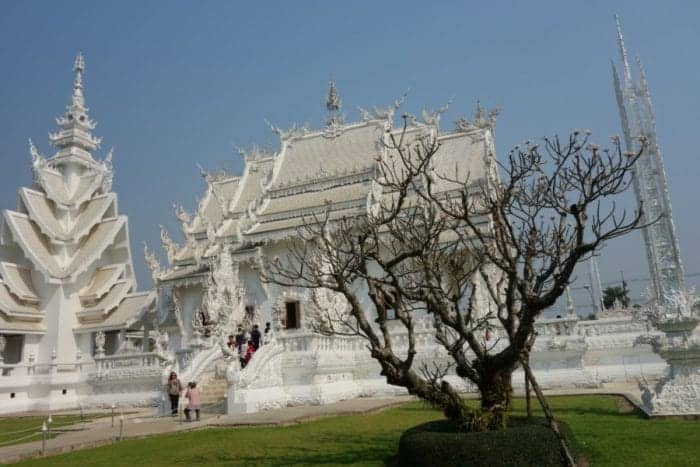 He weaves together complex, colourful and multilayered images and creations which not only display a stunning vision of a mysterious world contained within the world of buddhist imagination pushed in a totally new direction, but an intelligent a refreshing look at modern and popular culture and its effect on the world. The Chiang Rai White Temple being the absolute epitome of his artistic prowess and the culmination of his life’s work. 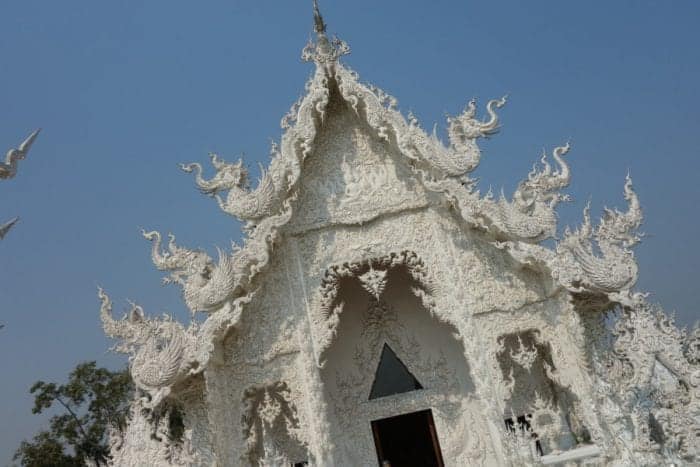 Discovering a different side to this beautiful and strange Chiang Rai White Temple!

Many visit thinking that this is just a unique and picture perfect temple, made as if from pure and sweet icing sugar that you could just pluck up and eat, the South East Asian version of the amazing ginger bread houses of Switzerland. We headed here knowing little more than that this impressive temple was one of the most special in the region, one that stood out and an amazing example of both Thai architecture and artistry. 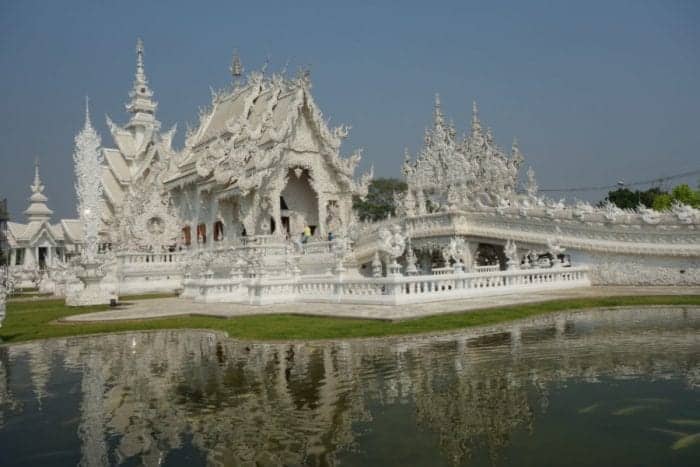 However. Upon arriving you soon notice things are a little, or maybe a lot different than your average temple. The symbolism starts from the huge to the tiny details, the gleaming white shapes and contours in all their immaculate beauty representing the purity of Buddha. A jaw dropping sight in itself from a distance the sheer wonder and wackiness of this place becomes more evident the closer you get to the Chiang Rai White Temple! 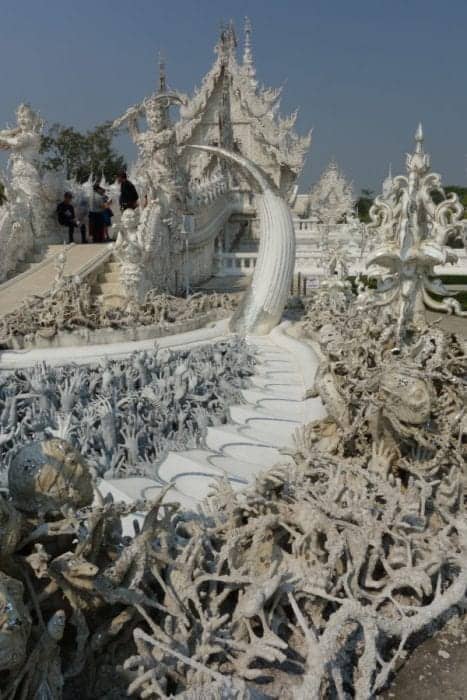 Hundreds of hands protrude upwards as if grasping onto the last remnants of humanity as they are dragged into the pits of hell below, a single red fingernail representing the evil of the devil and his work. You cross over just out of reach, heading towards the heavenly buddha awaiting you arrival. Demons encrusted in sparkling tiles, powerful, ugly and twisted guard the other end of the bridge, as if to push away the spirits from below that seek to take one last chance to sneak up into this enchanting place of kitsch strange perfection. 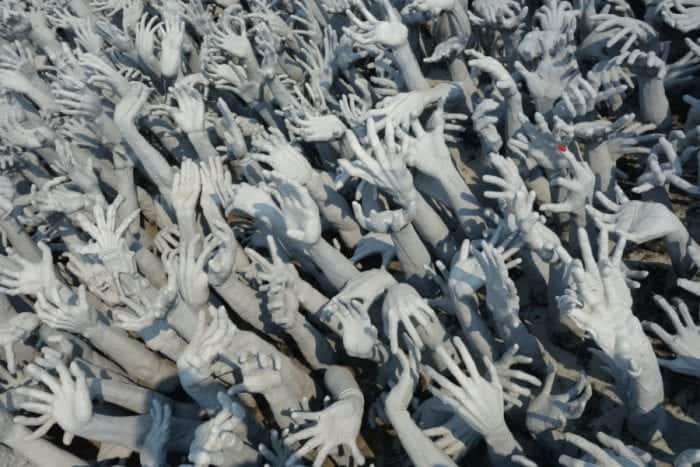 But this is just the beginning, now the real absurdity and intelligence of the place really reveals itself. Pokemon are painted in immense detail alongside a burning twin towers and President Bush and Osama Bin laden riding a nuclear bomb together through space. The Chiang Rai White Temple really is a wonderland of oddities! 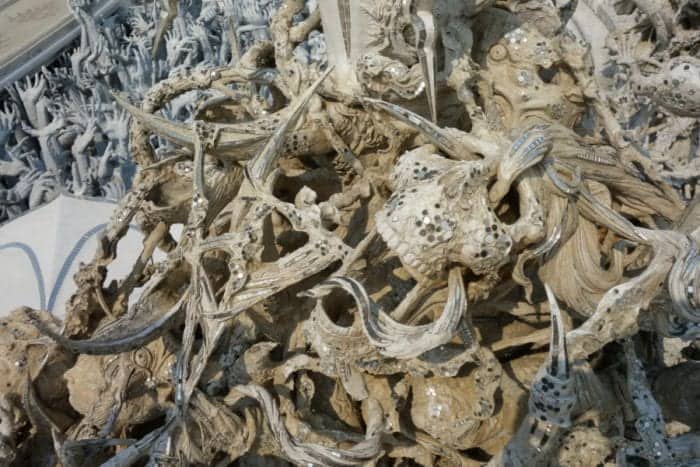 Predator bursts through the ground just before you enter the temple and shrunken heads of the terminator, hellraiser, freddie Krugger, Batman and even Deadpool hang as you walk by! Images from the Matrix to Micheal Jackson and on to Buddha bring together a strange mixture of traditional and modern culture, famous and infamous characters, idols, heroes and villains both real and fictitious. 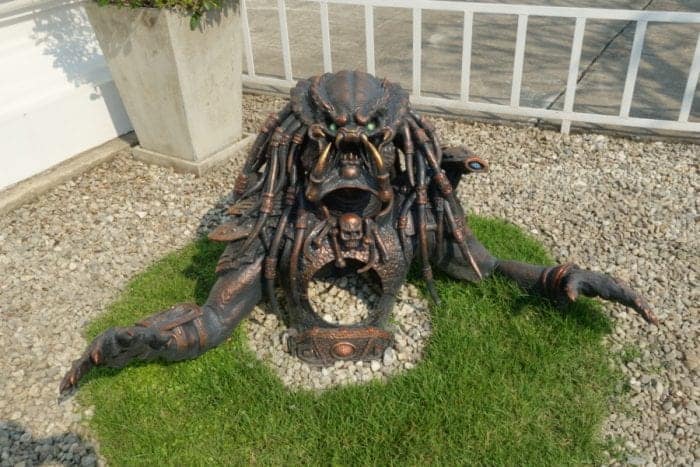 As the artist’s most prominent work, The Chiang Rai White Temple, then displays perfectly this mix of traditional and modern imagery, with interior murals combining scenes from the life of Buddha with sci-fi, superhero and pop star images such as Keanu Reeves from The Matrix, Elvis, Michael Jackson, Superman and so-on. It does remain controversial to some Buddhist traditionalists, as well as for different reasons to visitors, who can’t decide whether it’s an awesome or totally absurd sight. 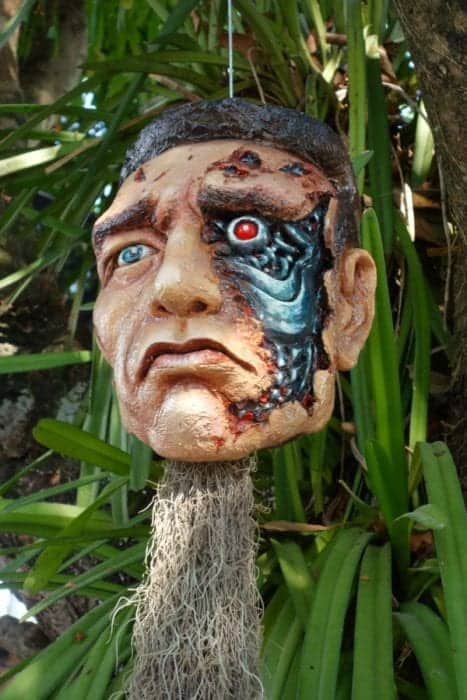 The Chiang Rai White Temple itself is one that can’t fail to create a reaction, whether that be amazement, confusion or even disgust depending on your religions beliefs over what is considered a controversial installation in Thailand. It is also still a work still in progress, one which considering the level of detail and constantly changing political landscape may never be truly complete. 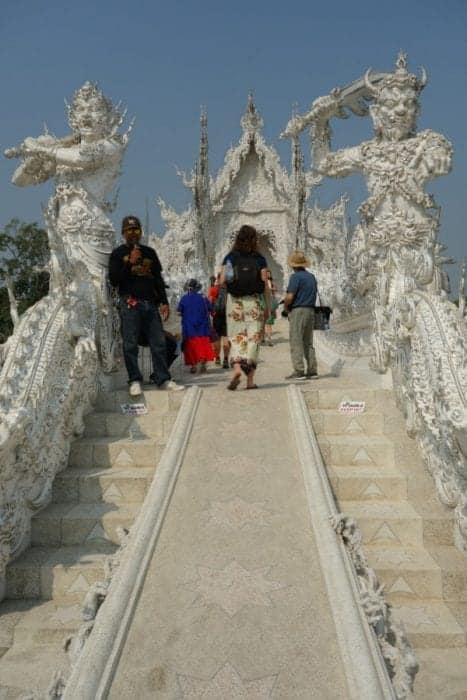 It may spark your imagination, a passionate debate or just open your mind to an new artistic appreciation you never knew you had. But you will not leave bored or disappointed by this eclectic and magical place. Even the late King Bhumibol himself bought some of Kositpipat’s work, earning him an even bigger reputation and also more widespread acceptance for this controversial work. 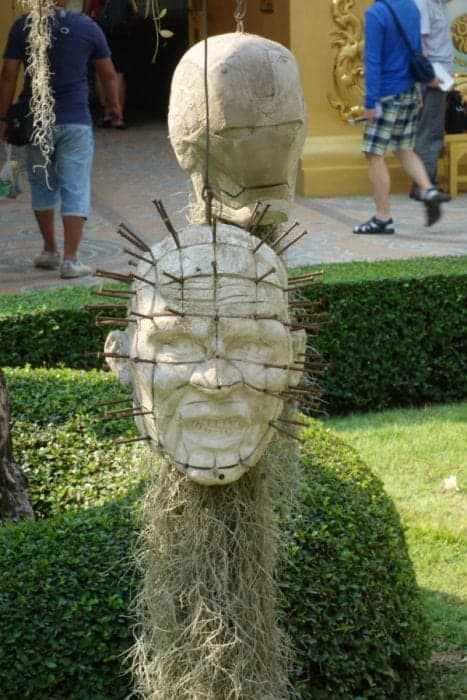 How to visit this crazy place

You can go by songthaew (Red covered pick-up trucks ) or take the public bus from platforms 7 and 8 of the old bus station. (Check the location as the bus station is undergoing renovations at the time of writing, may leave from the street nearby). Ask the bus driver or conductor to stop at Wat Rong Khun/ Chiang Rai White Temple.  T

he bus is only 20 baht each way and takes around 20 mins.

On the way back you can flag a bus or songthaews back to Chiang Rai from the front of the police station on the main road. Pretty much all of them will be heading towards the city.

From Chiang Mai you can take several buses from mini buses up to “VIP” buses. One somewhere around the middle should set you back around 150 Baht and take 3 hours. You can then take the public bus to the temple from there.

Book your transport across Thailand, Asia and NZ here: 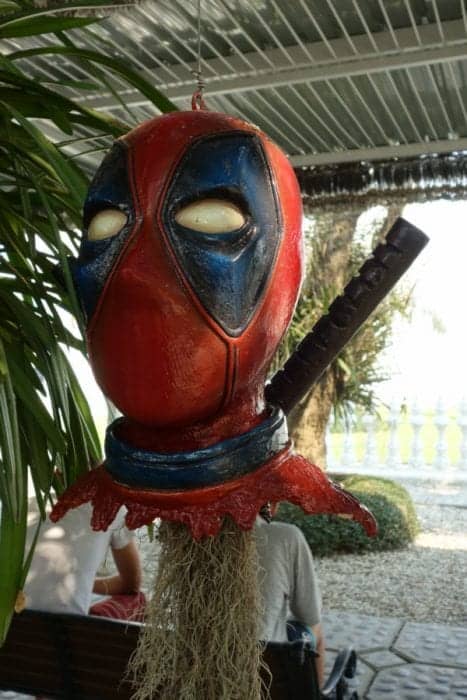 Also, make sure to check out the golden toilets!!

Read how we arrived in Chiang Rai on the 2 day slow boat down the Mekong from Laos:

Laos to Thailand on a boat

Have you ever been to the Chiang Rai White Temple (Wat Rong Khun)?

Book your transport across Thailand, Asia and NZ here: 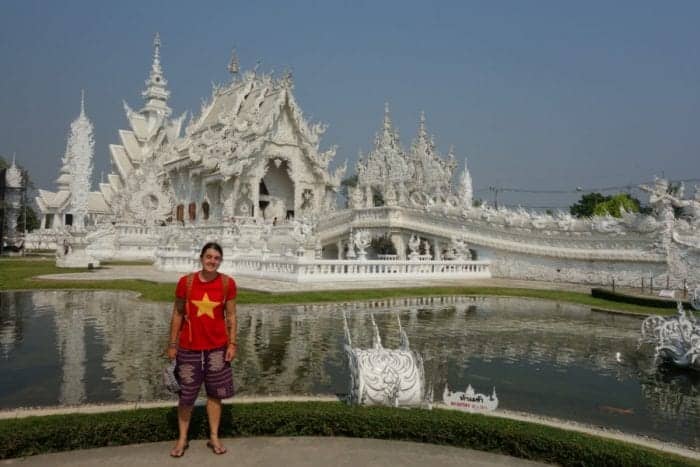 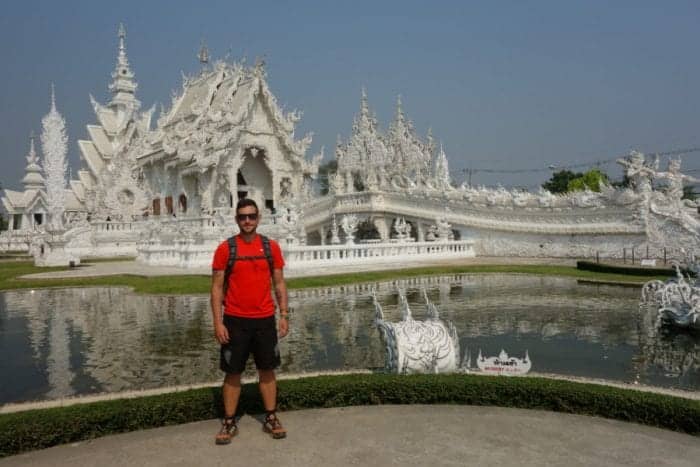 Trippy! I never knew this temple had so much artwork Nic. Really amazingly neat, especially with the Predator. He is one of my favorite movie characters because Predator is my favorite movie. Yes I know. I am weird. Really weird. Anyway, what a cool mix of Thai history and inspired artwork from a supremely talented artist.

It is such a cool and unique place, love how it brings together cultures! Who doesn’t love Predator!!