Beijing is the crazy capital of China, landing here was like a whirlwind. The beeping, the noises, the spitting and the smog, it felt a world away from what we knew back home and despite the initial shock we were ready and excited for this adventure out east. The capital might not be the most picturesque of places, but fortunately modern China is only just creeping into life here. In Beijing you can see the real China rather than just the urban sprawl or super modernity of other cities. So here’s our best things to do in Beijing and our rough guide to Beijing!

Here’s our rough guide to Beijing

Best things to do in Beijing: Wander the Hutongs and see the real China!

The best thing about Beijing is local life here, so it follows that seeking this out is of of the best things to do in Beijing! In other cities, as we saw in Xi’an, they have pretty much gentrified the entire city making it a grim and polluted urban wasteland. But here the tiny networks of back alleys and tight streets known as the Hutongs are still alive and thriving. Duck down these passageways and you will see people speeding passed on little electric scooters, children playing, old women cleaning their pots and pans in the streets and a much simpler way of life.

Chances are you will also be the only visitor down these streets, they might not be overly clean, but they are interesting indeed! It most certainly is up at the top of our rough guide to Beijing and its nice to see real people living in Beijing! 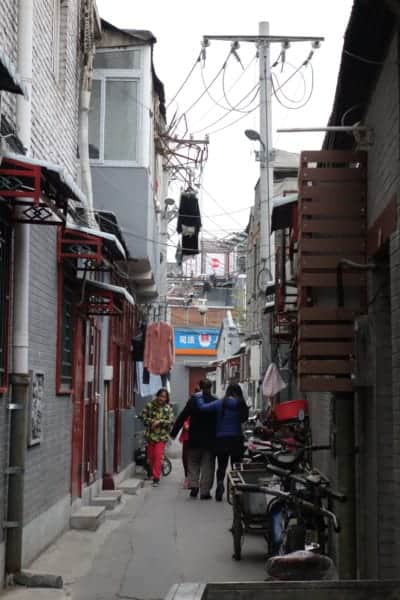 Take in the strange world of Tiananmen Square

Who can visit Beijing and not venture into Tiananmen square, that is, once you finally find the entrance past all the barriers and security! Reputed to be the world’s largest square it sits in the centre of the city offering a huge expanse of almost nothing and yet somehow is one of the best things to do in Beijing and really makes you realise why Beijing is one of the most important cities in China.

But look closely and there are some fascinating things to look at. From Chairman Mao’s mausoleum and communist statues surrounded by traditional Chinese architecture. This sure is a surreal place made even more strange by the lingering smog which makes it hard to see from one end to the other. But truly a historical place to visit that would surely make everyone’s rough guide to Beijing! 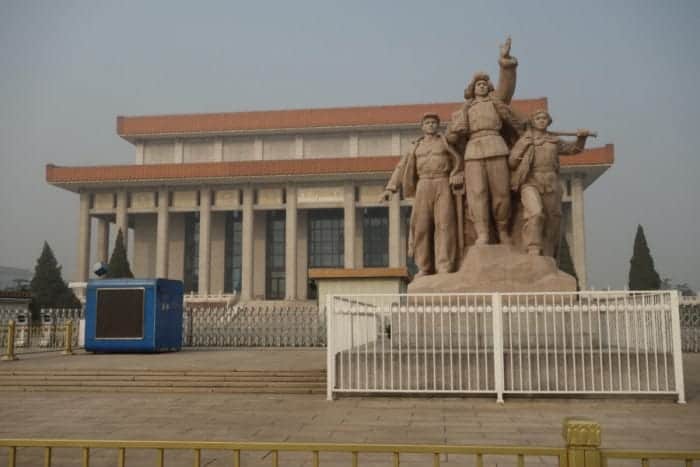 Price: FREE, You sometimes need to take your I.D to get passed the security area. We were asked once and not the other time, bit hit and miss. We just used our Drivers License. Be aware of scams however with regards needing ID and to wear certain clothing. 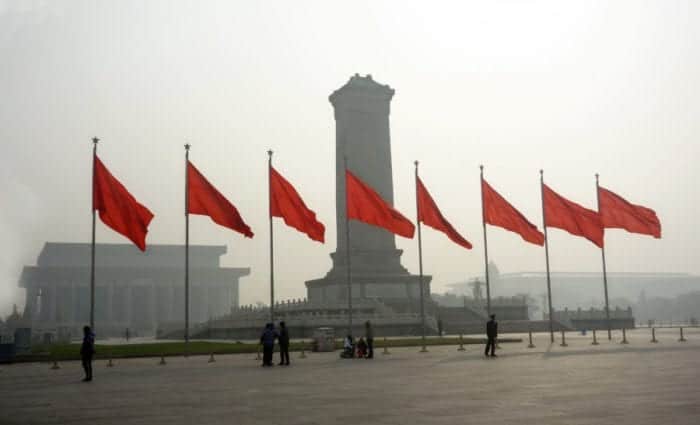 Head into the mysterious Forbidden City

Just across the road is the Forbidden city, closed off to the public for centuries this secretive place is now a museum that stretches out for what feels like miles. Head through the famous gates which hold the image of Mao up proudly as he watches over his city and into this imperial palace from the Ming dynasty. Constructed from 1406 to 1420, the complex consists of 980 buildings it  covers over 180 and is one of China’s most important cultural venues. A world heritage site it typifies traditional Chinese architecture and is UNESCO’s largest collection of preserved ancient wooden structures. A day exploring these grounds will leave you awe inspired… if not a little tired! Despite the bad Beijing air quality it still makes our best things to do in Beijing!

Price for the Museum: 60 Yuan for adults in peak season, 40 off peak. 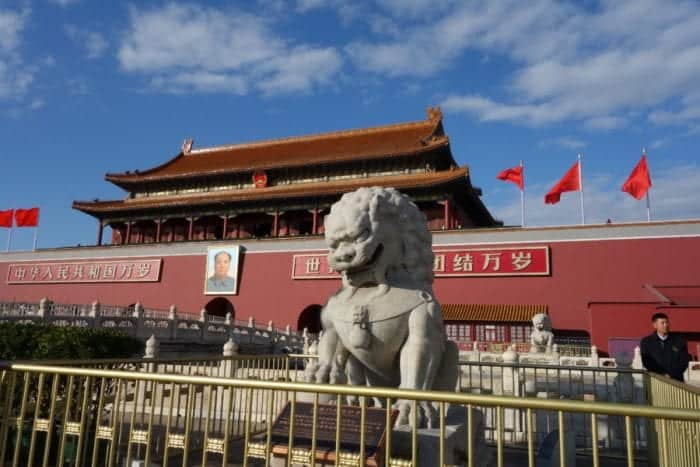 Explore the Temple of Heaven Gardens

These gardens are huge and contain numerous features and temples. In here you can see locals practicing Tai Chi, dancing with their partners, doing kung fu and picking fruit. Constructed in 1420 it is is composed of three main parts: Hall of Prayer for Good Harvests, the Imperial Vault of Heaven and Circular Mound Altar. Each a stunning piece of traditional Chinese architecture with amazing unique features. The best time to visit is before 9:30am to see more of the local life here. It is worth buying a ticket to enter into the several temples as the park itself can be a little drab on its own and if it wasn’t for the local life on show it might not have made our best things to do in Beijing! 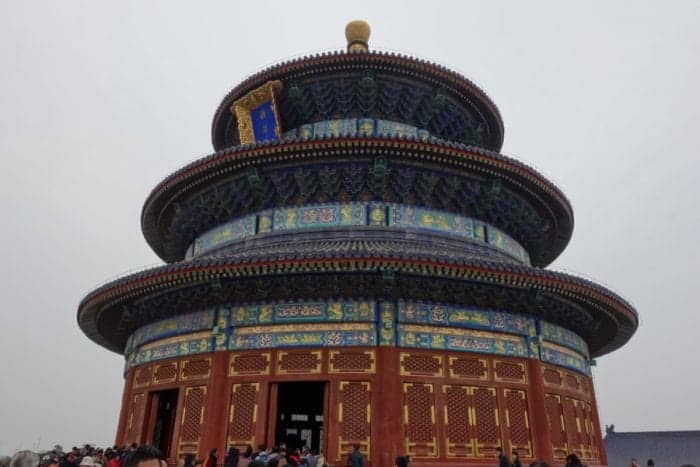 Soak in the atmosphere of Dashilan street

We actually stayed on Dashilan street at the atmosphere is amazing, one of the cities oldest shopping streets it dates back to back to the period of Emperor Xiaozong of Ming Dynasty. Along here you will see all walks of life and this crazy street seems alive from dust til dawn. Stepping out is like walking from the calm of your hostel to the wild chaos of Beijing. There are several cheap local places to eat along here also and some nice Hutongs to explore at the far end. However venture further in the other direction and there are even more shops to wander at. Just walking down here is an experience and by far one of our best things to do in Beijing! 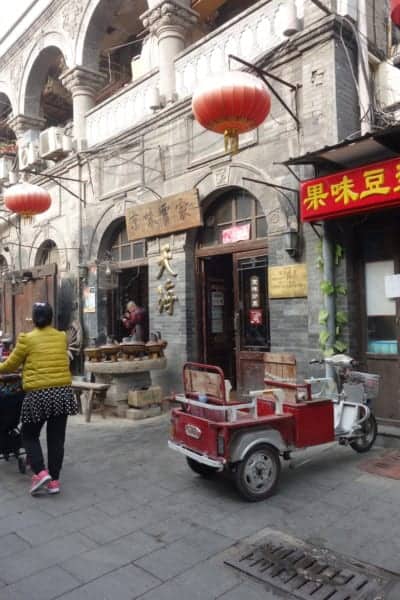 Step back in time and hike on the Great Wall of China!

Beijing is the perfect location from which to visit the Great Wall. Here you have a multitude of different options depending on the experience you would like. There are the unrestored sections of Gubeikou and Jinshanling, or the super touristy restored section of Badaling just a short journey from the city. We decided to compromise and visit the Mutianyu section where you can see both the restored section and the wild abandoned one! If there is one thing that we would say is top of the best things to do in Beijing then it would be visiting the wall! 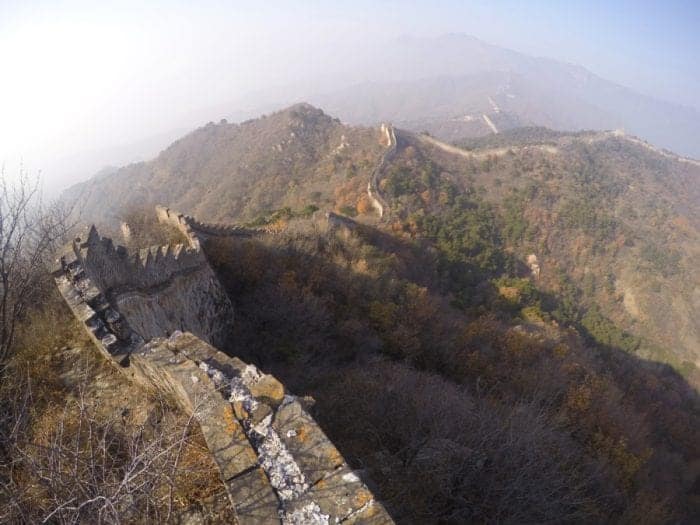 We had an absolutely amazing day here ticking off this major bucket list item in the most epic way. Seeing the restored section really allowed us to imagine the grandeur of the wall and how it should have looked. But the wild section was also a real adventure in the footsteps of those whole built this amazing construction. Taking the toboggan back down to the bottom was also something we will never forget! Here you can finally escape the bad Beijing air quality with our top pick in our rough guide to Beijing! 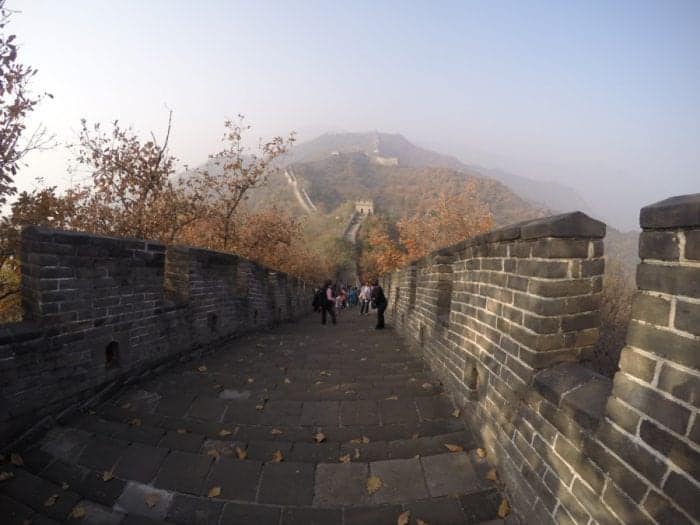 We stayed at 365 Inn on Dashilan street. It has a great atmosphere and we met some awesome people there. Prices are great and the dorms comfortable. There is also a bar with cheap beer and western food. The location is also really handy and the street itself lively and with some cheap places to eat further along. 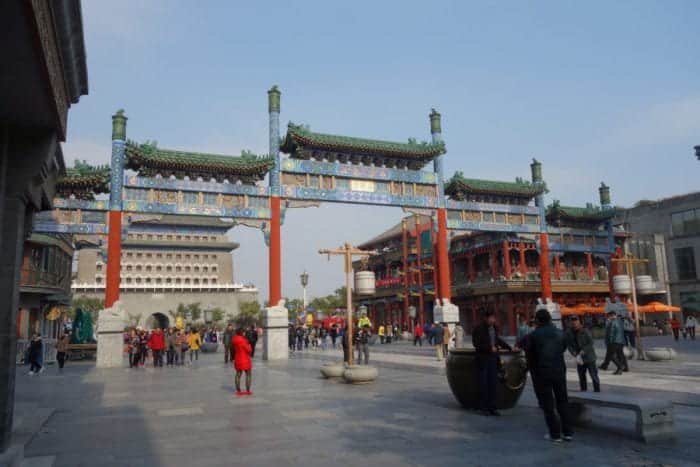 We will be doing a post on scams in China but in Beijing you need to be particularly on your guard. Watch out for locals who speak good English and appear friendly who want to give you tips or show you an art show or coffee house. There are also several people who will try to scam you on the way up to the wall to by sending you off on the wrong bus. Be really careful and do your research before you head up there so you know which way is correct…and stick to it! It sounds harsh but really in China you don’t know who you can trust and the friendlier the person the more suspicious you should be! 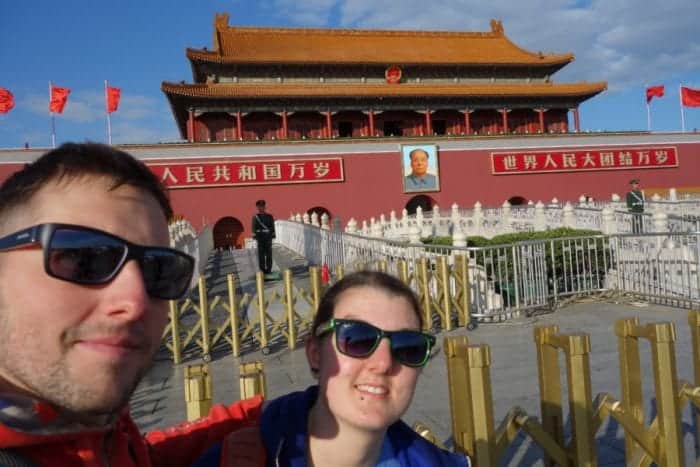 Have you ever been, What would make your rough guide to Beijing?

Great tips. I’ve never been to Beijing, but it’s on my list. I’ve always been fascinated by Chinese architecture and religious buildings. Did I mention I love Chinese food? Visiting the temples would be #1 on my list as well as the Old Summer Palace.

It is a great place to see the old and new sides to China and is much more traditional than other big cities, like stepping back in time in so many ways. The food is amazing but very different to the westernised version we had had at home! Just another shock! ha ha

So many things to see while in Beijing. So much history that most of us really don’t know or understand. Your trip is going to be a whole new experience! Enjoy!

Yes, such a busy and bustling city, its crazy! China was so eye opening!

Beijing is definitely on my travel list for 2017!! I really want to explore the Hutongs and back alleys…. and try ALL the food 🙂 Great post, thanks for sharing!

It is a crazy and challenging place but so rewarding too!