A day after Myanmar’s crazy New Year celebrations, the water festival of Thingyan, we headed for the countries most sacred and beautiful temple. We might have been forgiven for feeling “templed out” at this stage in our South East Asian adventure, however this was one not to be missed. The shimmering gold stupa of the Shwedagon pagoda can be seem from almost anywhere in the city, a beacon of religious pride that calls the faithful from all corners of this wonderful country.

The Shwedagon pagoda, a sacred place of reflection

The 99 Metre tall (325ft) gold plated Shwedagon pagoda is the most sacred in the ultra religious country of Myanmar. It is believed to contain relics of four Buddhas including robes, a staff, water filter and strands of hair. This huge temple sits on top of Singuttara Hill making it a dominant feature of the Yangon skyline. Historians place the building of the pagoda around the 6th -10th centuries by the Mon people of the region. However local legend states is was build over 2,600 years ago, which would make it the oldest Buddhist stupa in the world. 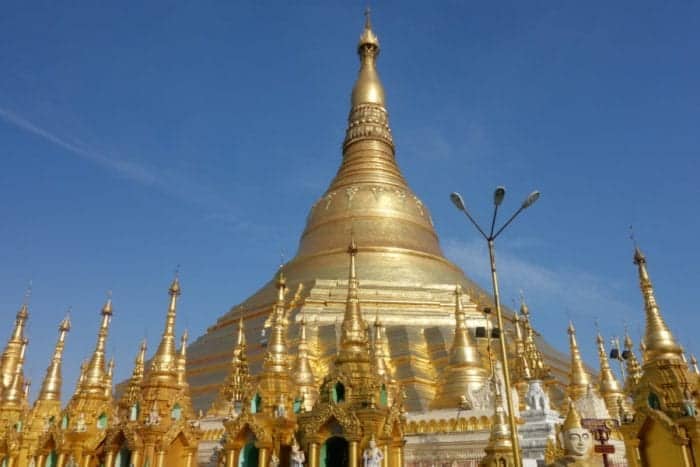 Over the years the Shwedagon pagoda has gradually increased in height, beginning with extensive repair works in the 14th century to bring it to a height of 18m. Later on Queen Binnya Thau terraced the hill and raised it again to 40m even having her death bed moved so she could see the golden dome during her last illness. Later a series of earthquakes would cause substantial damage to the structure even bringing down the top of the stupa. But this brought about more improvements and the eventual height of 99m by King Hsinbyushin in the 18th century. 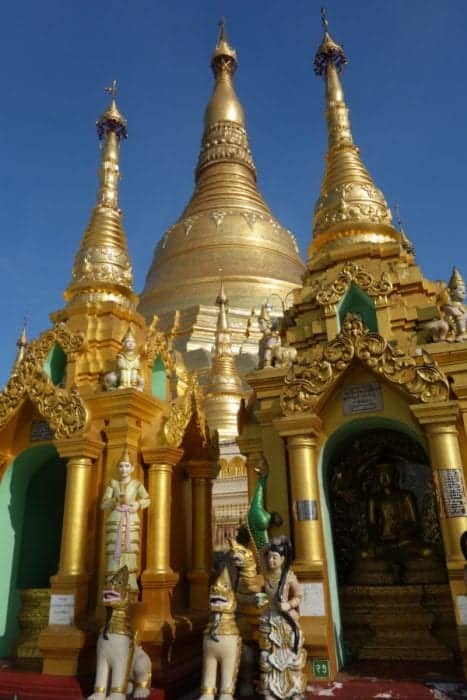 The gold that covered the stupa is genuine solid gold covering the brick below. Over the history of the Pagoda locals and monarchs alike have donated their gold to be used on this sacred structure and the practice continues to this day. Remarkably the crown is tipped with 5,448 diamonds and 2,317 rubies and the very top is crowned with a 76 carat diamond!! 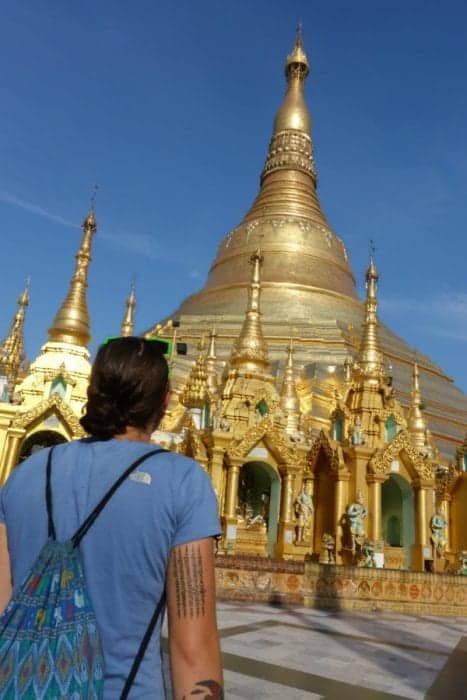 Taking the time to see this expansive temple, The Shwedagon pagoda!

After getting our long pants and Longyi’s on it was time to explore this magnificent structure. Stepping out of the dark steps and into the shimmering light reflecting off the stupa was an enlightening experience. It is no wonder so many flock to this magical place each year to pledge their faith. As is customary we circumnavigated the Buddhist Stupa in a clockwise direction, taking in the unique details of the stupa itself and the other smaller temples that surround it. 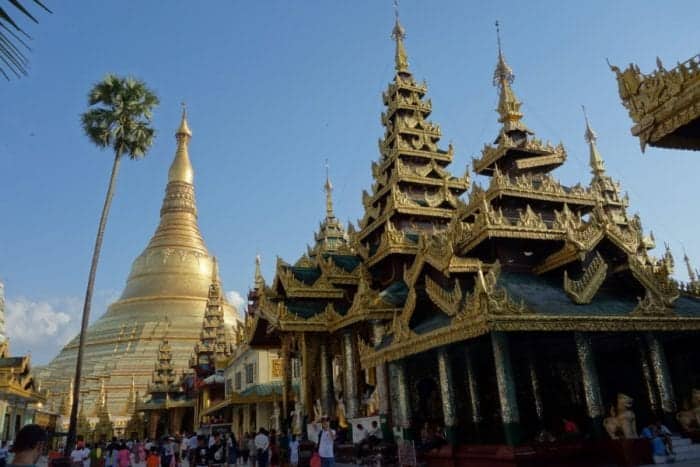 In actual fact the Shwedagon pagoda is like a maze, with many buildings, shrines and small passage ways leading off to other smaller stupas and shines. It is awash with monks and nuns too, everywhere you turn is another group in their crimson or pink robes, gracefully strolling around this magnificent sight. The whole scene itself is rather overwhelming in its beauty and intensity. Ever so often an army of sweepers passes through to keep this place is tip top condition at all times, other surreal sights include monks getting selfies with the stupa and enjoying the thrill of visiting this place just as much as any other visitor! 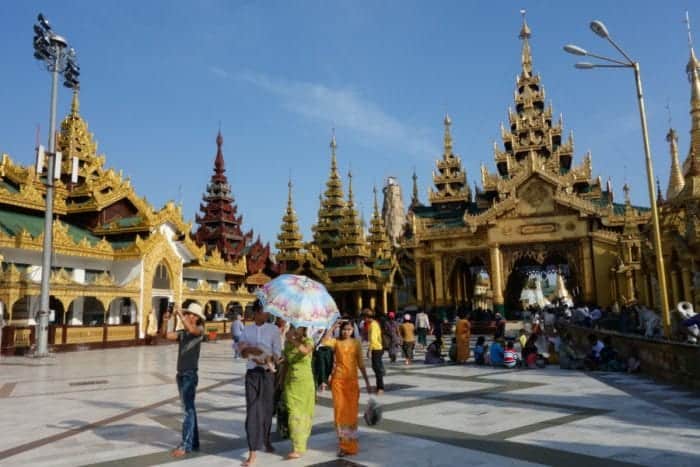 Chatting to one of the local monks

As we moved slowly around the Shwedagon pagoda, several times actually really taking our time to take everything in, the diamond encrusted details and just the scenes of devotion here, we were approached by a monk at rest. Sitting on the edge of one of the smaller temples we called us over for a chat intrigued as to where we were from. The chat was somewhat surprising and quite eye opening. Despite being a much more strictly religious country the fact that being a monk is quite a normal, if not highly respected, profession here makes them much more like your every day person. 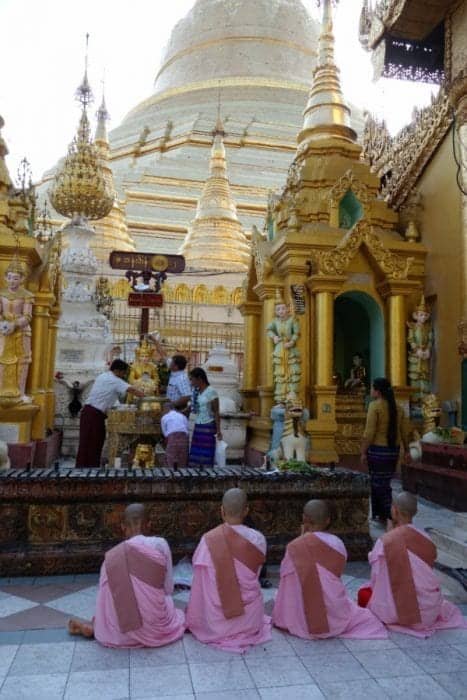 He had been a monk for over 30 years and the Shwedagon Pagoda was the temple in which he lived and worked. But far from living the sheltered life we expected he had travelled to almost all the neighbouring Buddhist countries and even had aspirations of visiting Europe one day. We spoke of football, of Brexit and travel. It was so refreshing to hear the perspective of a man in this position. Despite the fact he also disagreed with Brexit, on the principle that we should all be united as one and work together, he told us we should hold no anger or resentment. His smile radiated across the temple as he told us of the peaceful existence of being a monk, of accepting all the world is even in their pursuit to make it a better place. 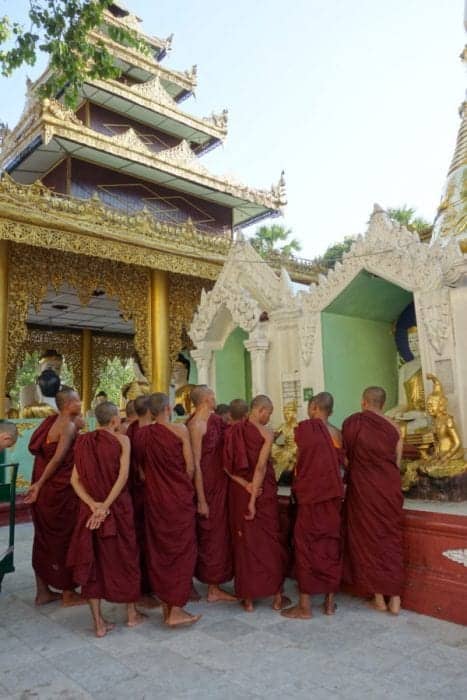 It was a reflective talk that really resonated with us and rounded off our time in Myanmar perfectly. A country that has left such a lasting impression on us through its beautiful people, culture and simply life. 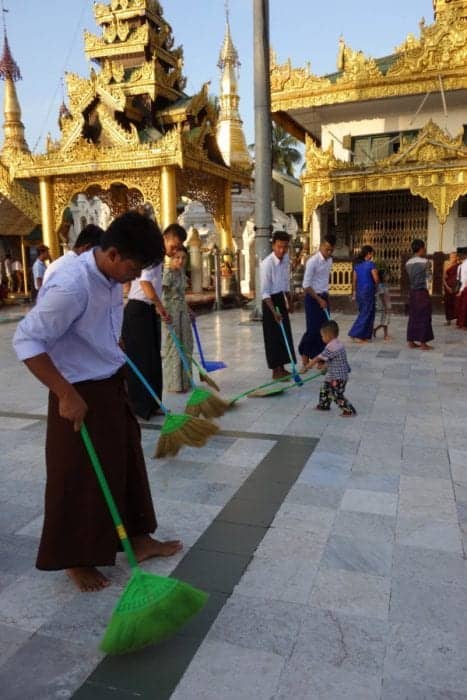 You must wear long pant/ trousers/ longyi/ skirt to enter for men and women. These can be lent off the staff at the entrance.

As is customary for all Buddhist temples you must remove your shoes when you enter the temple. As the temple is so large you will be given a bag to place them in if you need it/ don’t want to leave your shoes at the front. However be aware the people and kids at the front offering bags are a scam and you can get them inside for free.

Book your transport across Myanmar and Asia here:

Have you ever been to the amazing Shwedagon Pagoda? 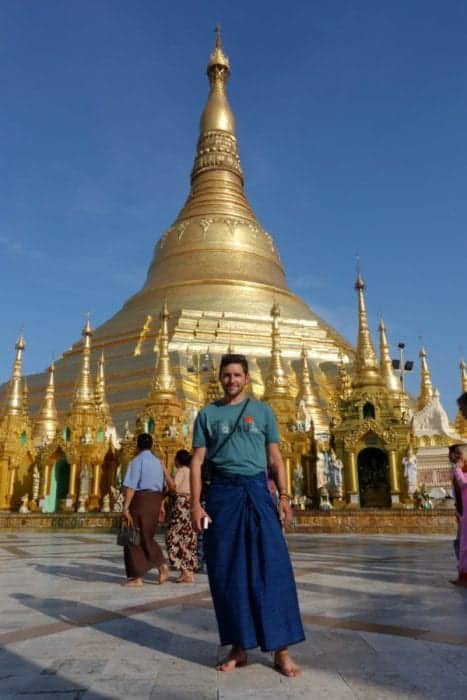 Book your transport across Myanmar and Asia here: 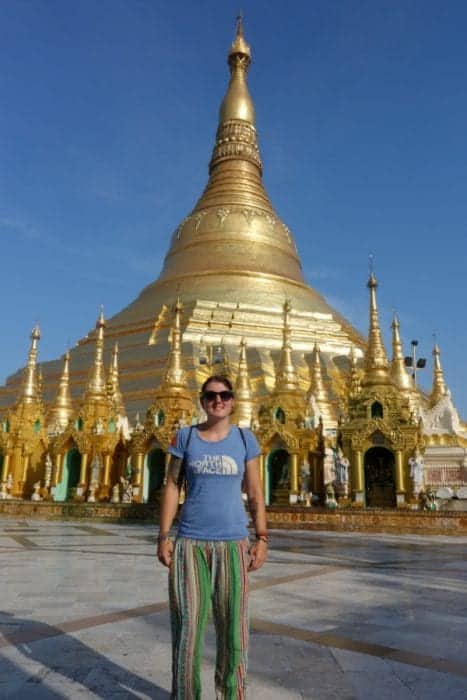 We spent an afternoon in this Pagoda back in March Nic. Loved it. The scale of the place was amazing. How cool to speak to a monk too. We chatted with a monk who spoke English in Cambodia. He was serene, calm, at ease, graceful, kind and compassionate. He also inspired me to meditate more LOL.

Amazing place isn’t it, just so peaceful but also as you said the scale of it, a very inspiring place. Oh, that’s amazing, love getting to chat to the monks, very insightful.