We headed to the the city of Shkoder in Northern Albania at the last minute, we had heard of an amazing ferry ride just outside of the city that takes you 3 hours through some amazing mountains. So we didn’t really plan on seeing much in the city. But it transpires that organising this ferry trip isn’t as easy as just turning up and getting on the ferry. So as extra days were added to our stay we decided to head out and explore a little. The main attraction here is the castle, now by this point we have seen a fair few across Europe. But after taking the steep climb up here it has to be one of the most impressive, there might not be much of the foundations left, but the view is unforgettable!

When we arrived in Shkoder we discovered a city totally different to the others of Albania, with it’s unique Cuban style architecture and youthful feel, this city felt felt a lot more modern than Tirana and Berat even though it is one of the oldest and most historic places in Albania. So as we had a few days to kill waiting to sort the ferry ride out, what better way to spend some time in a historic place than to visit probably its most historic remnant, Shkoder castle. 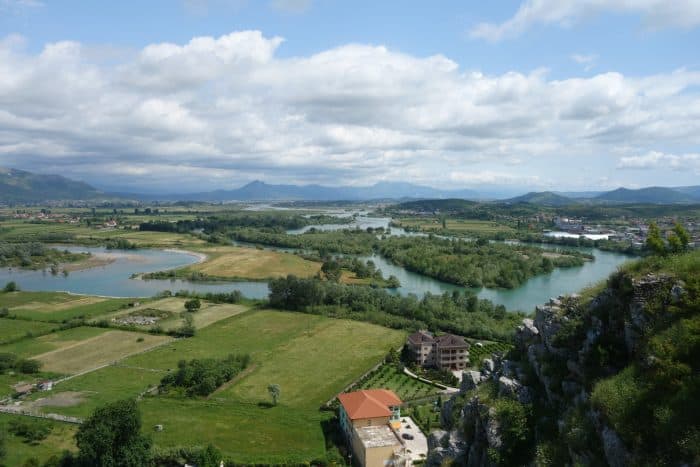 In Shkoder itself, the main attraction is the castle and a quick look on MAPS.me we found the route and headed straight there. The castle is slightly out of the city centre and if you choose to walk there (which takes around 40 minutes) you will walk through some local rundown neighbourhoods and also just skirt past a large refugee camp. 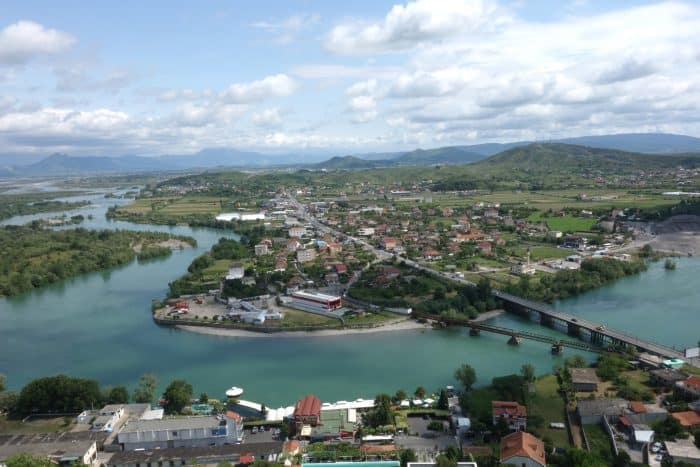 Once you reach the base of the castle it’s just a case of hiking up the winding path to the entrance, luckily for us there didn’t seem to be any other tourists around. Even when we entered the castle there wasn’t a person in sight! Once inside we explored the main areas around the grounds, if I was to be honest there really isn’t much to see inside as there aren’t any signs with information telling you about the history of the castle. 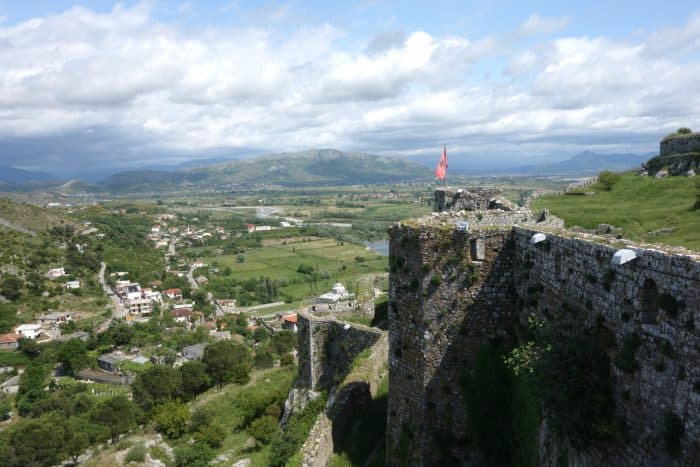 So if there isn’t much to see in this castle why am I writing this post about it… Well it’s not what’s inside the castle but what’s on the outside that is the most interesting. Like with many castles they are always positioned on a vantage point to give the best views from all around it, and it’s certainly the case with Shkoder castle as the views are some of the best we’ve seen. 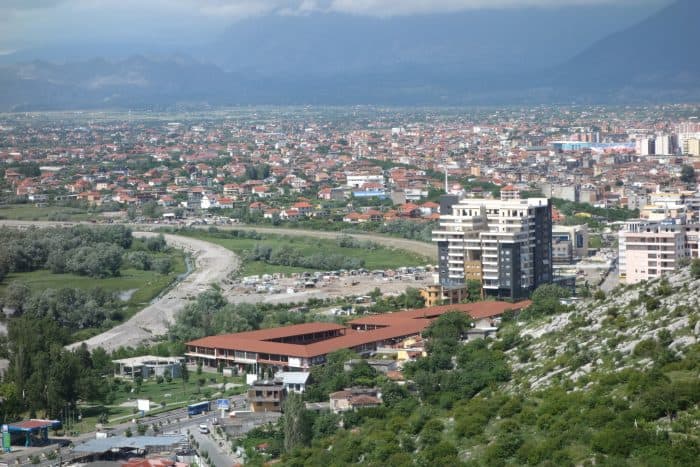 From one side you can see the stunning views over lake Skadar with the Albanian Alps surrounding it, whilst the other side provides you with the beautiful views of the Boyana river with vibrant green mountains that run along its banks and also being able to see the entire city. Basically every direction that you could look, you were faced with unforgettably stunning views. 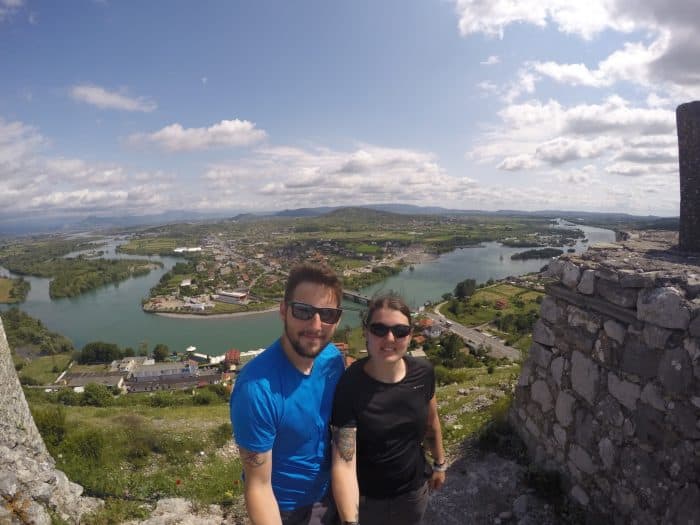 We decided to walk there which takes around 40 minutes from the centre and used the app on our phones called MAPS.me which helps to navigate you using GPS without internet. There are also local buses from the centre for around 30 lek each way. The entrance fee is 200 lek ( 1.5 euros) 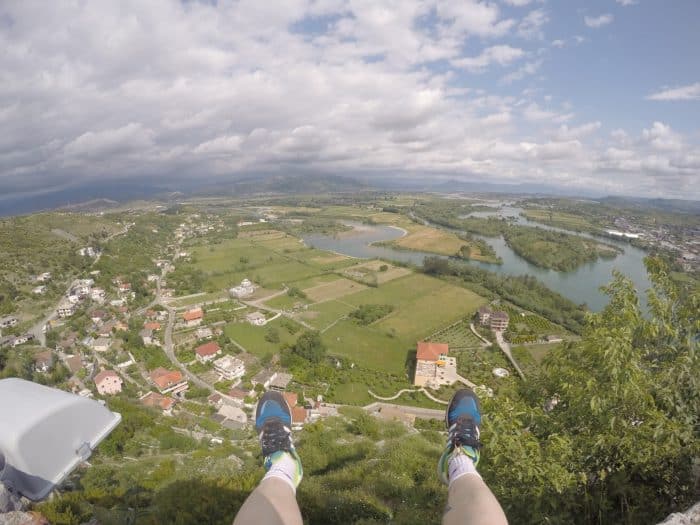 Have you every visited Skhoder? 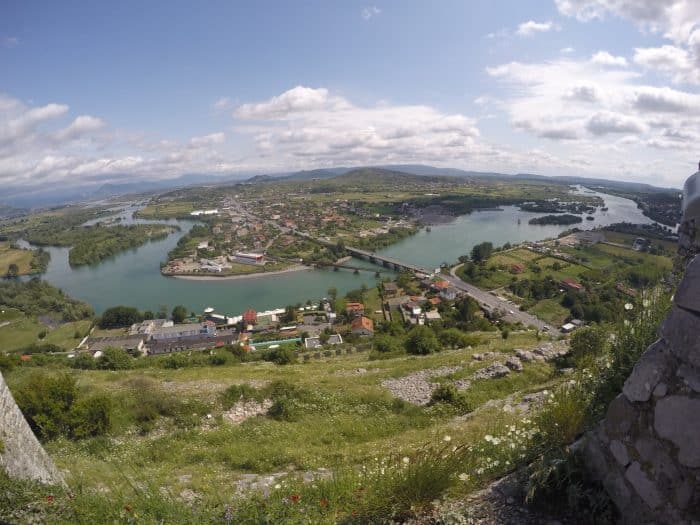 Wow, your photos are truly stunning! Thanks for sharing and happy travels 🙂

Thank you very much, with a place like this it is easy to take nice photos!! lol. 🙂

That is so cool you got the castle all to yourself. And, you are right. Those views are amazing!!!

That made it so much better on our own! Thank you!