Prizren is often overlooked for modern Pristina. But really this wonderful little city offers so much more culture, history and beauty than the capital. Often seen as being nothing more than a country tormented by years of war and struggling for independence, today Prizren is a shining example of how much Kosovo has to offer the discerning traveller willing to venture off the beaten track. This cozy Ottoman city is surrounded by mountains whilst its centre is filled with beautiful and diverse buildings which tell the tale of its complex and complicated history!

Built in 1615 this magnificent Ottoman era mosque sits by the river and dominates the city’s skyline with its huge 143ft minaret. The characteristic call to prayer can be heard ringing around Prizren from this historic piece of religious architecture which means so much to the residents here. 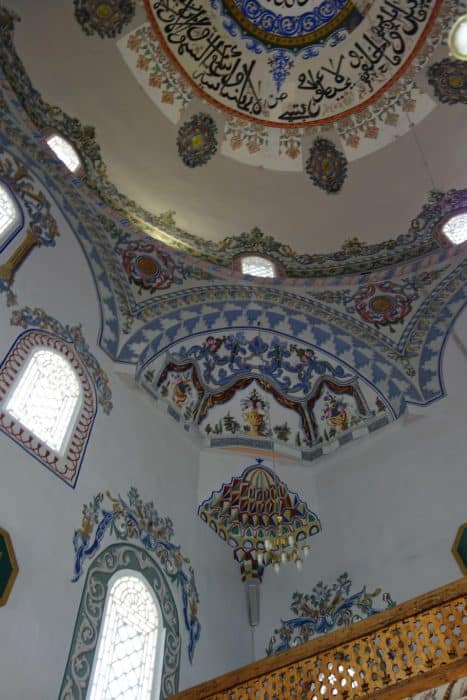 Rumour has it that the stones used to build the mosque were taken from nearby Saint Archangels Monastery which had fallen into ruin after being abandoned when the Ottomans arrived in the 16th century. Today the mosque still draws a dedicated local following who are often more than welcoming to visitors, just make sure to take your shoes off, but often covering your head if you are a woman is not necessary. 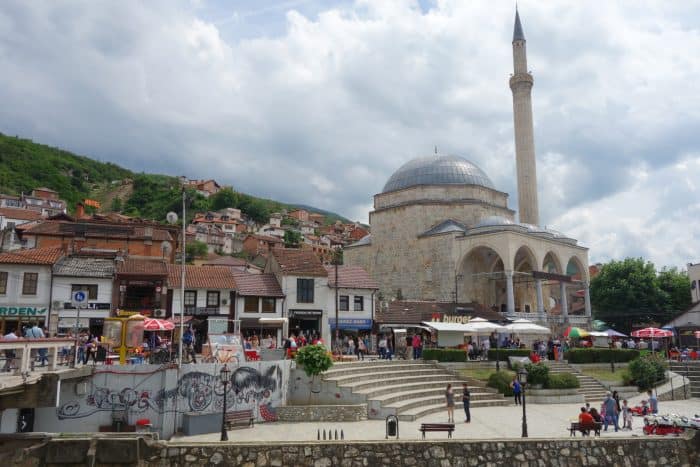 Hike up to the Kalaja Fortress

Sitting high above the city this medival fortress was built in the 11th century in what was at the time the capital of the Serbian Empire. The modern city which can be seen in all its glory from this magnificent vantage point developed around the fortress itself. 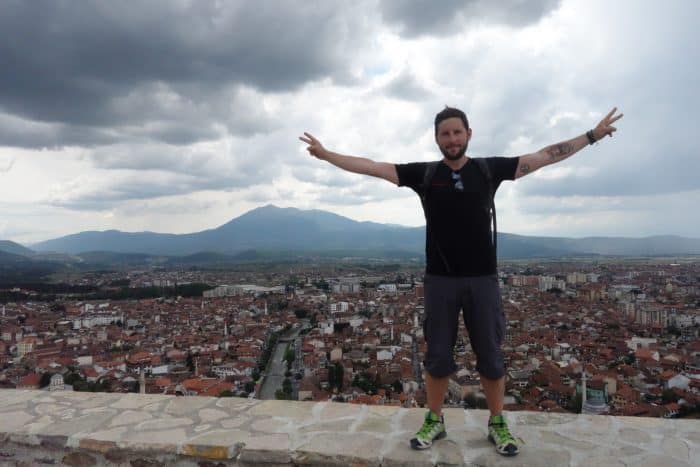 Up here you are literally walking in the complex history of Prizren and the many cultures that have influenced it over thousands of years, from the Byzantines, to the Serbs and the Ottomans they all passed through here and left their mark. 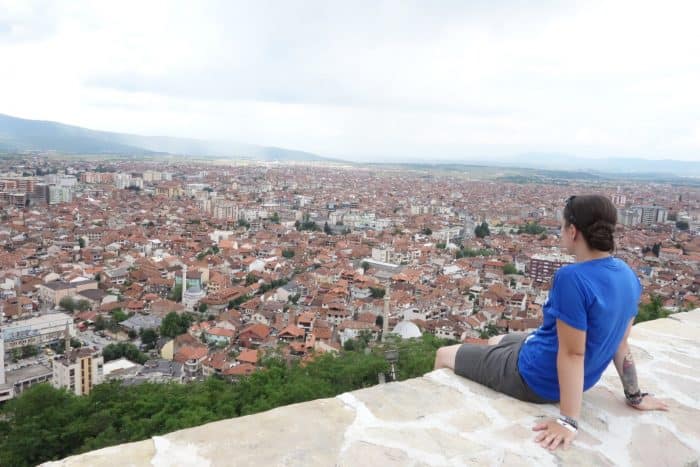 But really what makes the steep hike up here really worth while is the stunning panoramic view of the beautiful city below and the shadow of the mountains beyond. 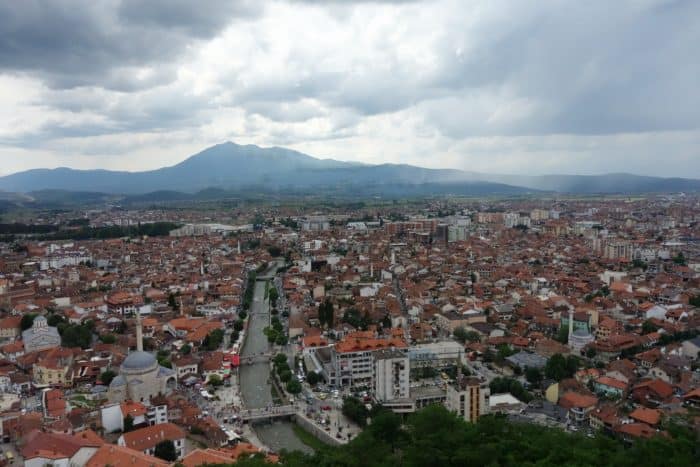 See the church surrounded by barbed wire: Church of Our Lady of Ljeviš

This 14th century church has seen its fair share of history and given the county that is now sits in it is no wonder. Now surrounded by protective barbed wire it has been the victim of fairly recent riots against any Serbian remnants in the country. The church has gone through many phases in history, being converted into a Mosque during the Ottoman rule and then back into an Orthodox Church in the early 20th century. 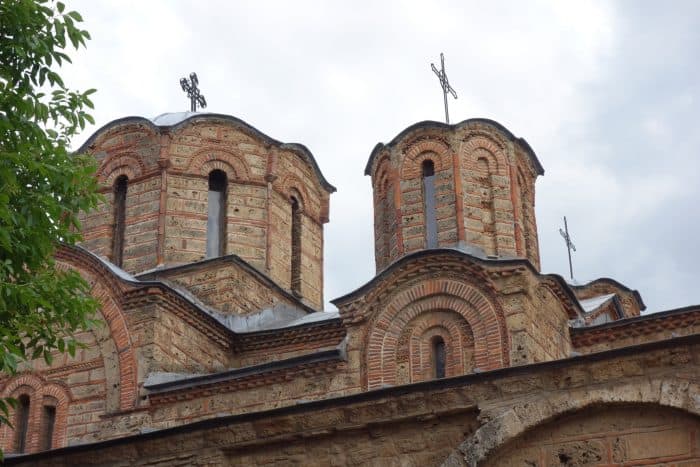 Placed on the list of endangered UNESCO world heritage sites it was placed under constant guard after the war of 1999 but suffered greatly during the 2004 unrest in Kosovo. Today the site is left in limbo and many Kosovan’s despite their hatred towards Serbia feel the arson attacks of a few years ago were unjustified. 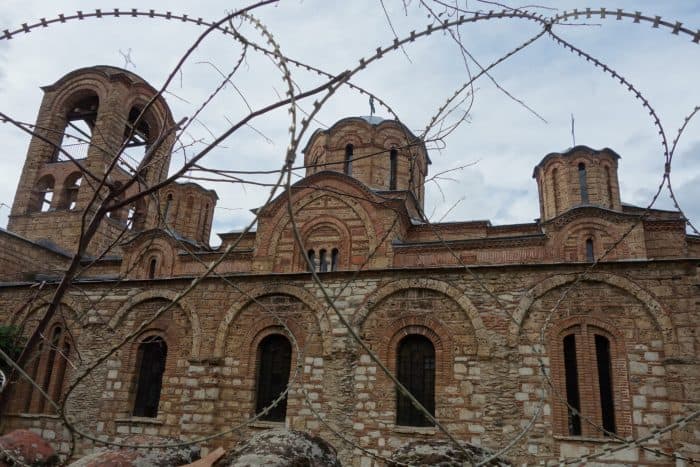 Wander around the ancient streets

Prizren is a city steeped in history and one of the best ways to take that all in is to wander the streets, nipping down the tight cobbled alley ways to discover the original traditional Ottoman houses that still characterise the city. The city has a real charm to it with a friendly and mystical atmosphere. 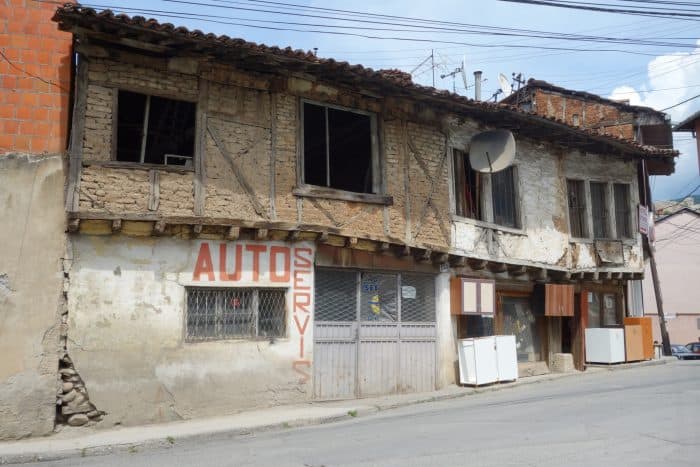 The captivating mixture of cultures, ages and eras can be seen best on foot as you get lost in the maze of wondrous architecture. 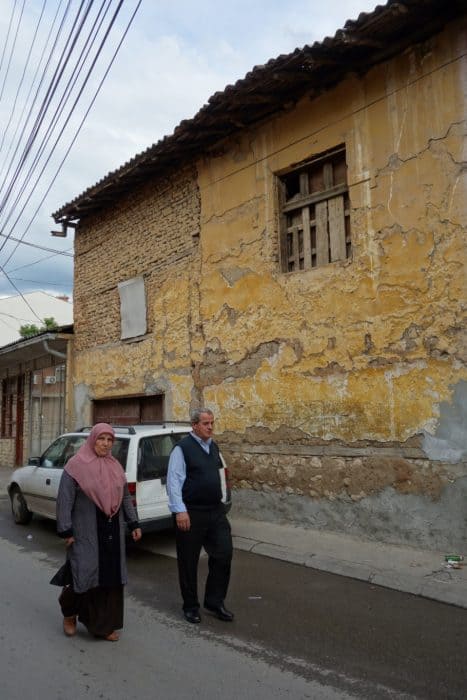 There are also many more smaller local mosques to see dotted around the city and the Turkish Şadırvan  quarter with its protected water fountain whose legend says if you drink from it you will return one day to the city! 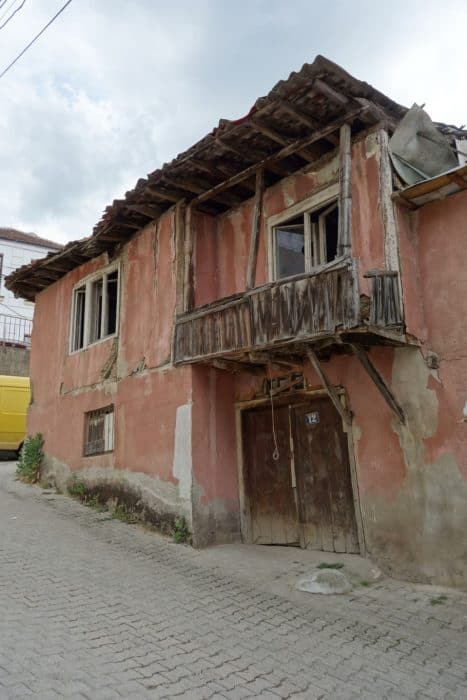 Take a walk down the picturesque river

Once you are done exploring the streets of this one time capital of Kosovo it is time to head down to the picturesque river. Cross over the landmark Old Stone Bridge for some of the most breath taking views of the city as well as another fascinating insight into the history of this ancient city. 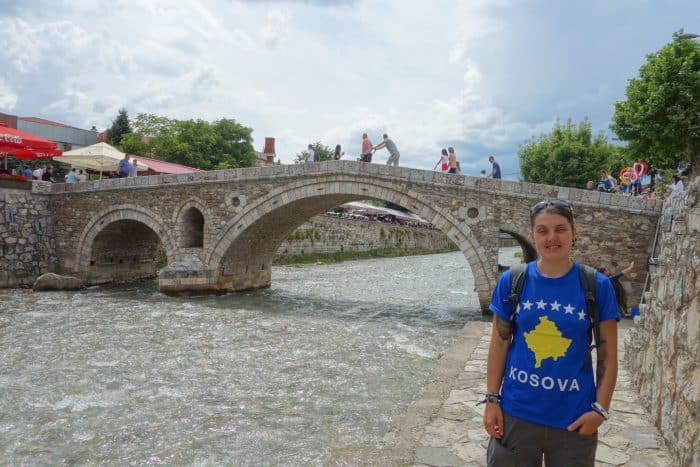 Water wheels and carved out paths for the aqua systems of the city can still be seen today. One of the best places to spend a warm and sunny afternoon is in the bars and cafes lining the river, Prizren is an old city with a youthful demographic and the colourful riverside is the best place to feel the energy of this wonderful city. 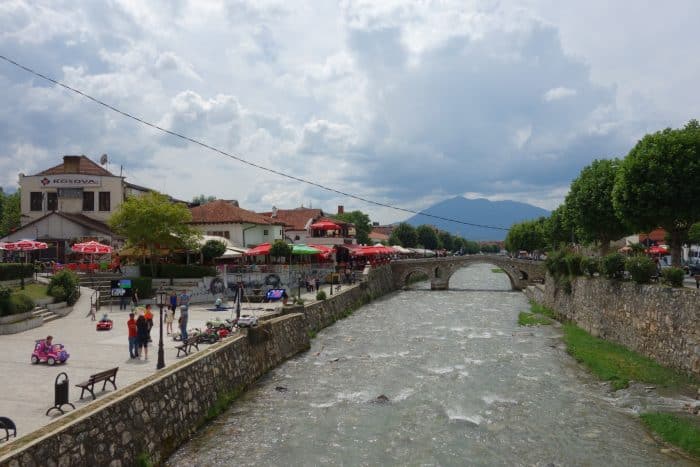 Hang out with the local kids in Prizren!

Kosovan kids usually come with a stigma attached to them, often in this poor country they can be overlooked, ignored and even abused. But pay a little attention to these talented kids and you will gain an rewarding and eye opening experience. 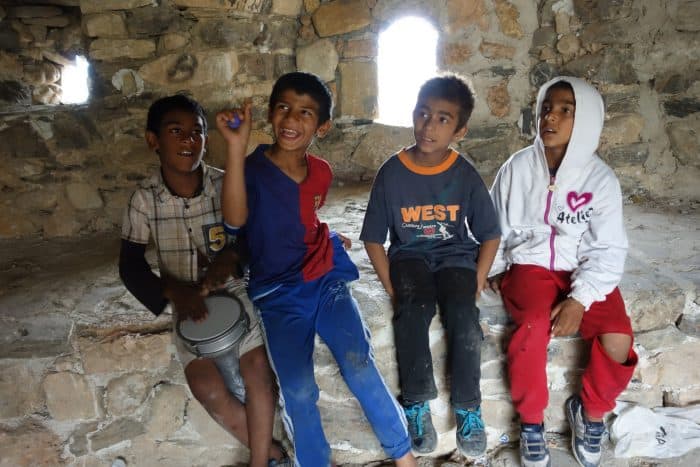 Whilst caught in a storm up at the fortress we were suddenly surrounded by several energetic kids bouncing off the walls and playing a rhythmic beat on the drums. Our initial reaction was to greet them with suspicion and hold tightly to our belongings, but as the storm rose in ferocity and we had to spend more time undercover we began to see them in a different light. 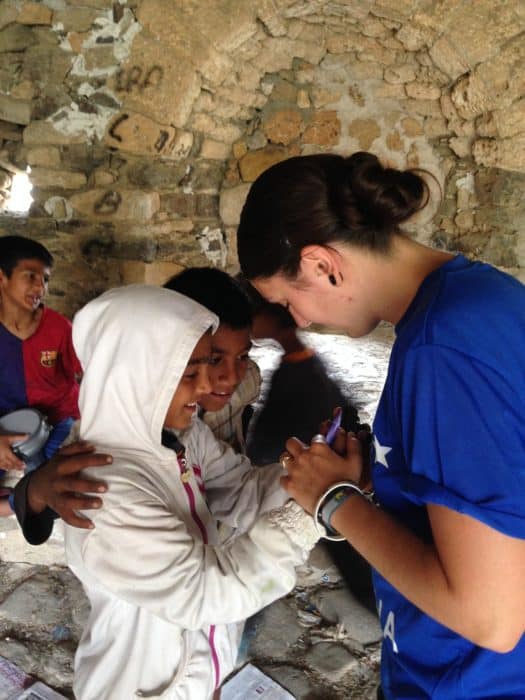 They came ever closer, touching our tattoos and looking in wonder at us, despite not being able to speak a mutual tongue we communicated through hand signals, music and play. It really did make the experience in Prizen that much richer to interact with these sweet but streetwise kids! 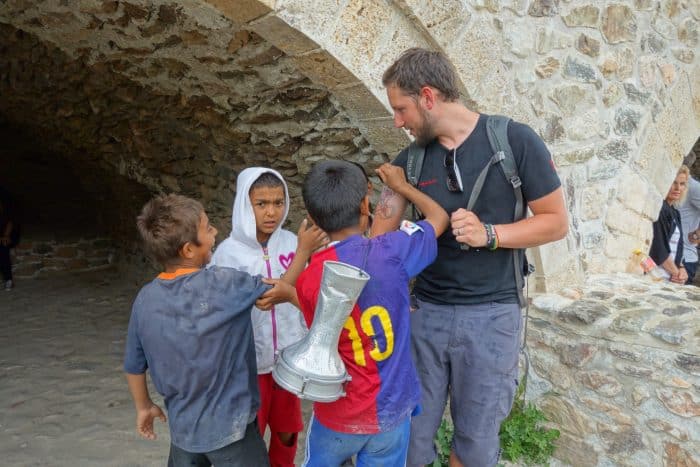 Have you ever heard of Prizren? 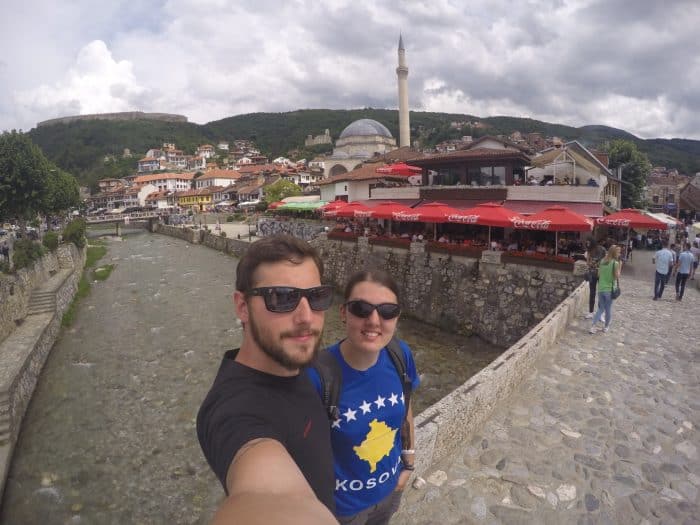 Ottoman city which was built long before Ottomans even existed. Don’t spread false informations about something you do not know. Prizren was a capital of Serbian Empire before he fell before Ottomans in 1455.

It looks similar to the scene by the Bosphorus, where I took evening walks.

Yes, we spent a week in Istanbul a few weeks after visiting Prizren and I know exactly what you mean.

It’s often the overlooked cities that end up being the best! That panorama is pretty amazing (barbed wire and all)! I’m so happy to see you took the time to make the local kids smile, we often look beyond them, and it’s clear they enjoyed the attention!!

Yes this is so true, it was an absolute highlight of our time in Kosovo to play with those kids.