Back in 2014 we made a crazy journey over from Poland into the at war Ukraine. Unsure what we might find we discovered a beautiful harsh country with vast contrasts between the emerging modern state and the weight of the soviet past. We vowed to return and to head to Kiev, the capital city everyone told us was so different to Lviv. They weren’t wrong! Here we found the real modern soul of Ukraine and an effortlessly cool capital city that had such a different vibe to old and dusty Lviv. We found a place that made us question what we had already seen of Ukraine and one that also took our hearts in a way we never expected! 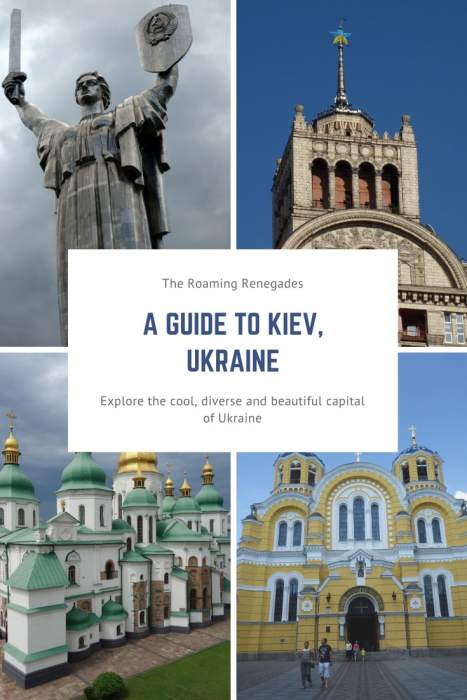 Mother Motherland and the War Museum

After the riots of 2013 and 2014 you will be hard pushed to find many of the soviet statues and throwbacks that used to litter Ukraine. But out here on the outskirts of Kiev is probably one of the largest and most imposing you could ever imagine. If soviet history is your thing then this whole area is ideal. Not only is it dominated by this 335ft, 560 tone stainless steel statue but dotted around here are many typical soviet reliefs.

What is also interesting here is the WW2 museum that sits at the base of the statue. Originally a museum to the soviet unions exploits against the Nazi’s, but today it commemorates just those of Ukraine in a well curated and fascinating series of exhibitions. It also has many exhibitions in the entrance hall, in a more ad hoc fashion, that displays items from the recent war with Russia, which is also somewhat ironic given the original purpose of the building.

One of many stunning cathedrals of Kiev this green domed UNESCO world heritage site has stood here since the 11th century and is one of the most important in the country. The cathedral was named after the 6th century Hagia Sophia in Constantinople…modern day Istanbul, which we visited earlier on our trip. Taking two decades to build this Byzantine masterpiece is a must see in Kiev and climbing the stairs of the magnificent bell tower provides the most unforgettable view over the unique cathedral and across the city centre itself.

Independence Square, The centre of the Kiev riots

Known as Maidan Nezalezhnost and the centre of the city and of the country in many ways. This open area is at the bottom end of the main street of Kiev and has been a traditional place from Ukrainians to gather for political protests and rallies. The square was also host to cultural gatherings and the site of the cities main christmas tree over the festive period before the events of 2014.  The square is so named after Ukraine’s 1990 independence movement and has hosted many important events in the history of Ukraine including:  the 1989 student “Revolution on Granite”, the 2001 “Ukraine without Kuchma“, the 2004 Orange Revolution, and the 2013–14 Euromaidan.

Most famously the square was the site of the riots that culminated in the war against Russia which is still on going in the far east of the country. The square itself was almost destroyed and the scenes from that time contrast starkly to the proud appearance of the area today. However remnants of that time are clearly visible in the many posters and shrines that litter this area to those who died in the conflict. A moving and important place to visit.

Yet another important religious building in Kiev it is clear to see that Ukrainians take their faith seriously when you explore Kiev. Much like Lviv you will find dedicated followers displaying an unnerving level of emotion many of us will probably never have experienced. The Lavra Monastery is probably one of the most important and extensive Orthodox Christian sites in the country and here we witnessed people passing out, kneeling on the floor and in floods of tears such is the impact this beautiful place has on them.

The UNESCO listed Monastery established in 1051 spans many buildings, churches, bell towers and most famously an underground cave system. Down here women must cover their heads and dress modesty, no camera equipment is allowed into this sacred and protected environment. Down here you will find the many remains, often completely on display, of monks who served here over the years. This eerie and highly spiritual place, even for atheists, is one of the most unique places to visit in Kiev…and also the second time we’ve seen a dead body on our travels!

Metro systems in the post Soviet sites are often magnificent affairs of propaganda and after seeing the amazing Moscow Metro system we were keen to visit Kiev’s. It might seem like a strange thing to add to a list of must see places but not only is it a cheap and reliable way to get around this large city but it is also an important piece of history that deserves a closer look.

Built as the third large metro system in the Soviet Union after Moscow and St. Petersburg the Kiev system has a typical decorative art deco style that characterises the Soviet metro systems. Opened in 1960 the system is home to the deepest station in the world: Arsenalna at 346ft below the surface. Also within the system, and our local station for our stay in the city, is the stunningly decorated Zoloti Vorota which more resembles the interior of a grand opera.

Happening 30 years ago this colossal disaster captured the hearts and minds of many around the world when the reactor at the Chernobyl power exploded on the 22 of April 1986. We were actually fortunate enough to visit the site and the amazing but heartbreaking ghost town of Pripyat during our time in Kiev (Post coming in a couple of days!). But being something we are quite fascinated in we just had to visit the museum in the city too.

Documenting another side to Chernobyl than we saw when we visited the museum concentrates on what happened directly at the plant, the immediate clean up attempt and the long term impact that the fallout has on the environment and people of Ukraine and further afield. The museum is fascinating to visit but I do wish more of the signs were translated into English, but they are apparently in the process of doing this.

Read all about our amazing day explore Chernobyl here: Chernobyl, the most amazing urbex ever!

As the name suggests this church is a bright, colourful and shimmering affair that is not to be missed. You might have thought you would have had enough of churches, cathedrals and monasteries by this point but the beauty of Eastern Orthodox places of worship really never gets old. In Kiev there really are countless examples to marvel at, even for the non religious like us, the ones we have mentioned on here don’t even scratch the surface, but they are the most important and grand.

Built in the middle ages the monastery is right across a large square from St. Sophia’s church and is a magnificent sight inside and out. Having been founded from 1108–1113 it has undergone many guises, being rebuilt in the 1700’s it compromises the cathedral, refectory, economic gates and bell tower. The main Byzantine cathedral was demolished by the Soviets in the 1930’s but was lovingly reconstructed in 1999 following the independence of Ukraine in 1991.

Kiev’s main university campus is a grand and brightly coloured building set in a leafty district of the city centre and surrounded by wonderful parks. The “Red university building” is the oldest of the university buildings and is a symbol of the establishments known the world around within education circles. Constructed from 1837-1843 in the late Russian Classicism style it is so coloured to reflect the red and black stripes of the Order of St. Vladimir, the highest honour of Imperial Russia.

Surrounding the university are several park, many of which offer lovely walks through manicured pathways, past imperial statues and offer a fascinating insight into local culture. We particularly enjoyed watching the older men playing intense and hard fought games of chess in the park, even catching a game involving some younger men in which the elders were particularly excited over!

A change in Perspective about Ukraine

From the dusty streets of Lviv, the huge soviet block bus station on the outskirts of the city, the poorly maintained roads which wound their way through forests of white Birch to the tiny villages made up of nothing more than wooden shacks with packs of wild dogs roaming around their outskirts. Returning to Ukraine was always something we wanted to do, partly because we actually loved the rugged and harsh charm of this country that many are too scared to visit, partly also because we had heard Kiev was so different and also because we wanted to spend more time here and also visit Chernobyl.

In visiting Kiev though we did see a completely new side to Ukraine, the youthful and energetic side, the friendly and modern hub to Lviv’s ancient and crumbling charm. We found a country that had carved out its own personality out of the ashes of the Soviet Union and not just, as many people no doubt consider it, a smaller version of Russia.

Ukrainian pride is everywhere and you cannot walk a few meters without seeing something painted in those lovely yellow and blue shades. We enjoyed visiting Ukraine the first time for sure, but we found somewhere hard to be and almost like a time warp in Lviv, but in Kiev found a beautiful, strong and liveable city that we unexpectedly fell in love with and actually stayed for much longer than we expected!

Have you ever visited Kiev?

FYI: the correct Ukrainian spelling is Kyiv, not Kiev. Kiev is the Russian version of our capital name.

Hey, sorry about that if it caused any offence. We were unaware of that. We will try to go through and change things.

Beautiful country! I wanted to visit but not this time.

It really is and is so underrated and really cheap too.