Well, with the Easter Bank holiday weekend in full flow and spring finally in the air we had major plans to get back out climbing after my knee operation…but the weather had different ideas! With hail stones and heavy showers we had to move the adventures undercover…but who said anything about indoors! We decided to head down into the mysterious depths of the 2 million year old Poole’s Cavern in the Derbyshire spa town of Buxton for a historic exploration! 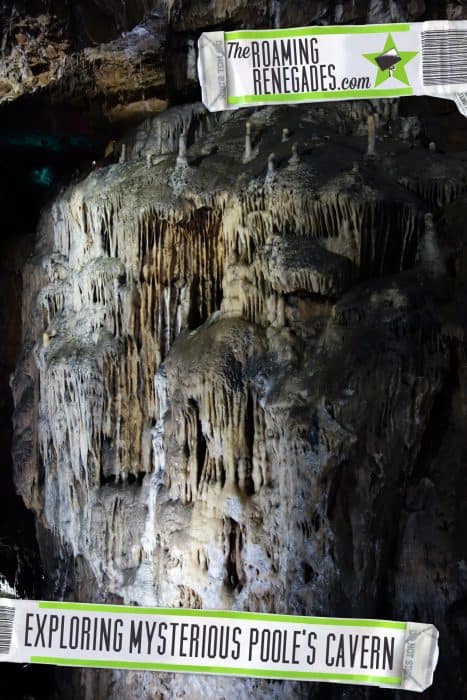 As readers of our blog will know we love a good adventure and are no strangers to caving having tackled the famous Gaping Gill system a year or so back alongside many others before we started blogging. Caving is a challenge we love but with inclement weather the usual pot holes we would tackle on our own by crawling, abseiling, climbing and without guides are out of the question. Given that I am still easing myself back into our usual regime of adventure this show cave was a great way to get back underground on a wet and miserable day and discover some of the amazing natural wonders of the UK! 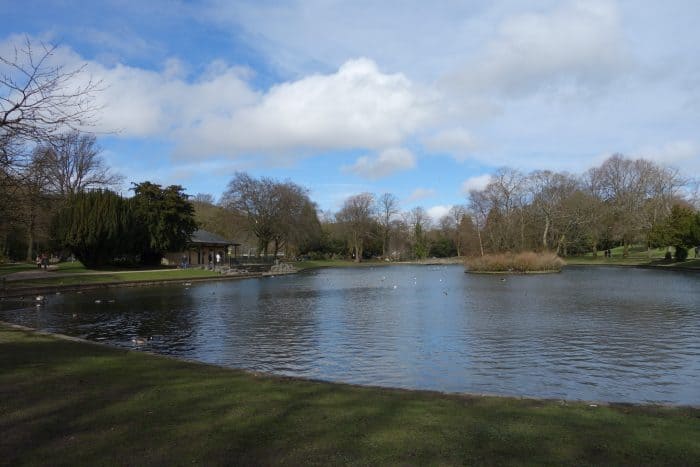 The spa town of Buxton is often know as the gateway to the Peak District of Derbyshire, a place we know well from our climbing exploits there. Despite being in this lovely rural setting the town is actually not far from Manchester at all being just over an hour away by road or just under and hour direct on the train. 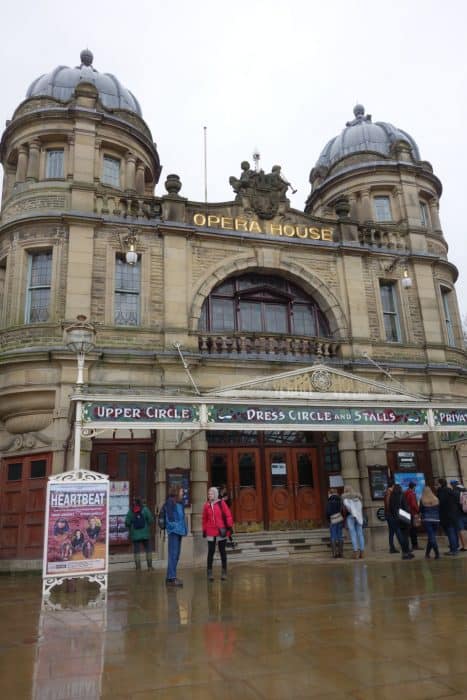 This beautiful market town has the highest elevation of any other in England and alongside Poole’s Cavern is home to the impressive 1903 Opera house, the wonderful Pavilion gardens and several other notable historic buildings. This spa town was founded by the Romans as Aquae Arnemetiae, a testament to the go thermal springs from which the town still makes an income. These can be accessed straight from the St. Anne’s well in the centre of the town for the freshest water you could imagine! 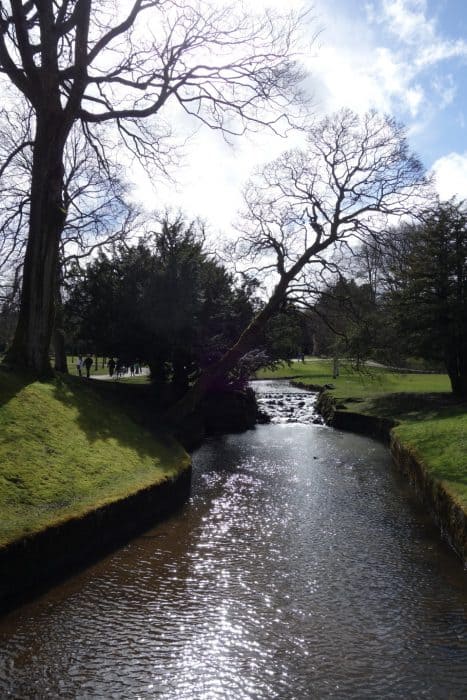 Buxton is also a great place to base yourself for some picturesque hikes and trail walks through the stunning Peak District, one of the UK’s biggest national parks. 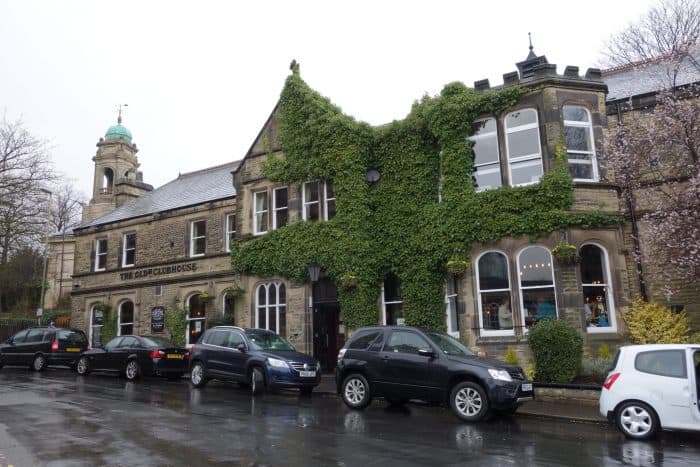 A designated site of special scientific interest this cave system has fascinating generations of people, from businessmen to victorian tourists, bold adventurers and modern day history buffs. This cavern and its mysterious appearance continues to capture the imagination, and its clear to see why. 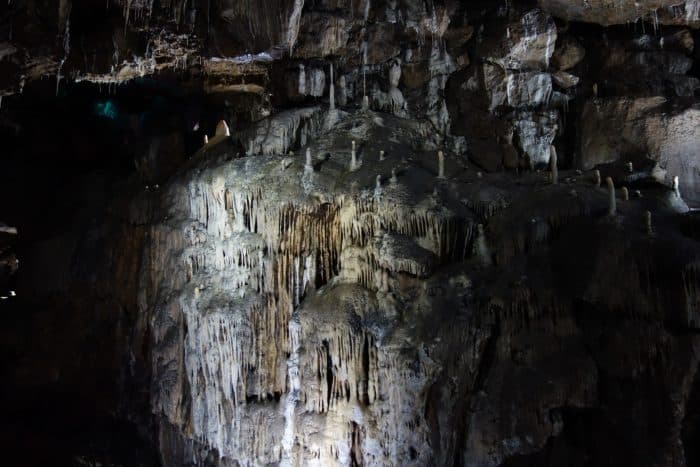 The cave itself is made of natural limestone which was formed over 2 million years ago when England would have been closer to where Florida is than our current chilly position! The rock would have begum life as crustaceans, coral and fossils underneath the tropical ocean before several ice ages and continental shifts pulled it into its current position 1000ft above sea level. The impressive amphitheater of Malham Cove over in Yorkshire is another example of the impressive limestone formations of the uk! 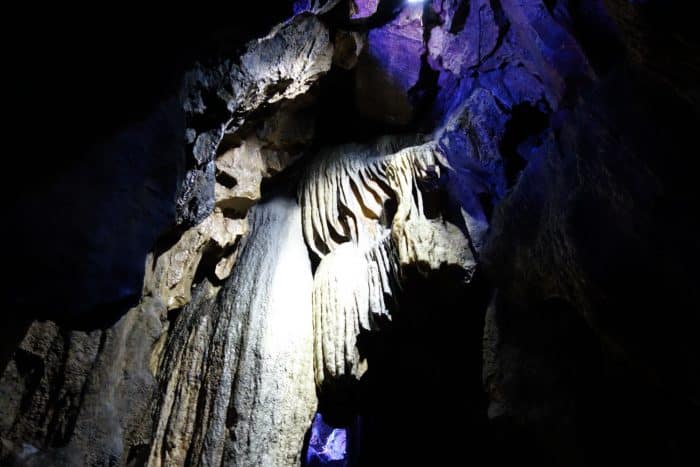 The more recent history of the cavern, in relative terms, gives us the name of the cave. The outlaw John Poole used this dark and damp lair as a hide out from which to rob travellers and clip coins in the 15th century. It is rumoured that an angry local mob sealed him inside the cave after becoming victims to his crimes.  Some areological exploration suggest the cave was inhabited as far back as the Bronze age and could have been used for shelter and religious purposes. 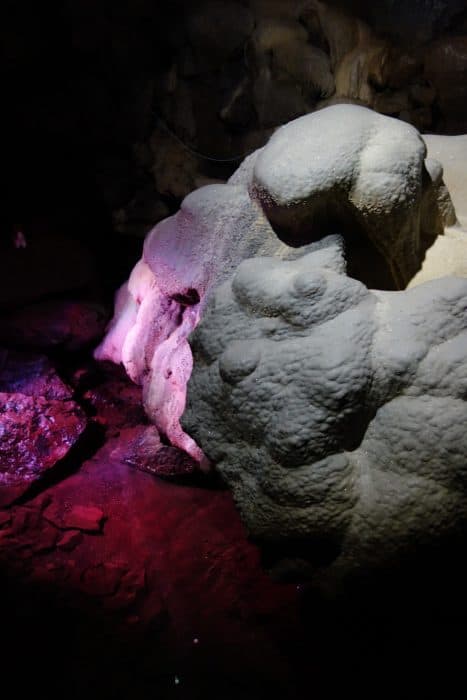 The cavern however was officially opened as a show cave by the 6th Duke of Devonshire in 1853 but was already a well known tourist attracted having been recored as a “wonder of the peaks” as far back as 1683. The victorians however had their fun and used dynamite on several section of the cave in order to open it up for public tours and investigate further chambers. The series of gas lamps installed alongside the widening of the entrance in 1859 remained until the cave closed in 1965. The cavern reopened again in1976 and has been regularly updated with paths and lighting systems over the years since then. 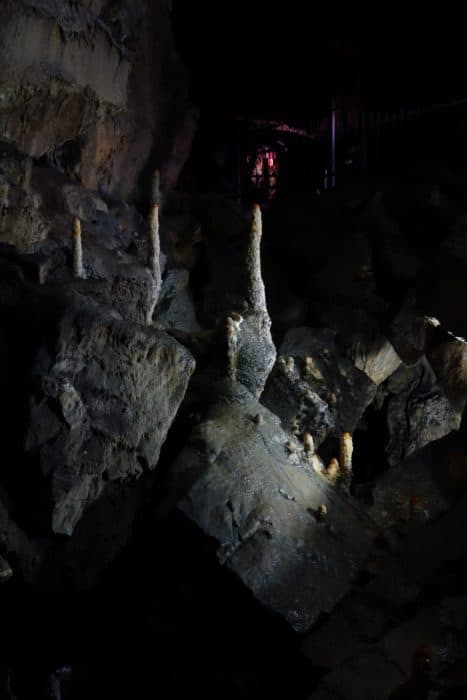 The cavern itself begins with a tight squeeze through the narrowest point in the current opened system. The interior temperature is a constant 7c all year round, in the summer this gives tourists a rest bite from the outdoor heat and in the winter it feels lovely and warm! For us however on this rainy spring day the temperature inside was almost identical to that outside and felt rather chilly! 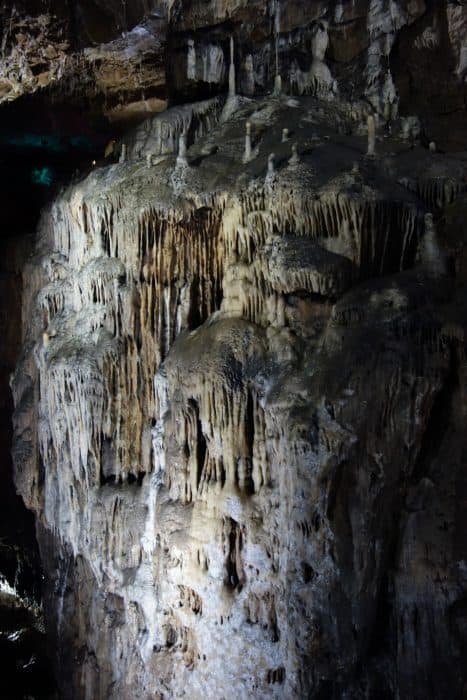 We usually hate tours but fortunately this one was a small group lead by a passionate local geology graduate. The hour long route through the 310m cavern was made even more fascinating by the inclusion of the weird and wonderful history of this cave. Stoping at certain places to point on the details we would have surely missed in this low lit environment gave us a real insight into both the social and natural history of this magnificent system. 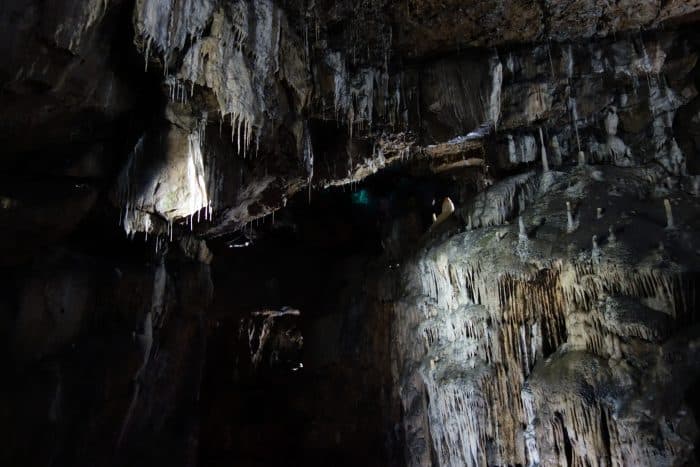 Exploring the vast chambers of the great dome, Roman Chamber, Poached egg Chamber and sculpture chamber alongside such impressive features as the Flitch of Bacon and the Mary Queen of Scot’s pillar 1000s of feet below the earth surface was quite a way to spend the day. 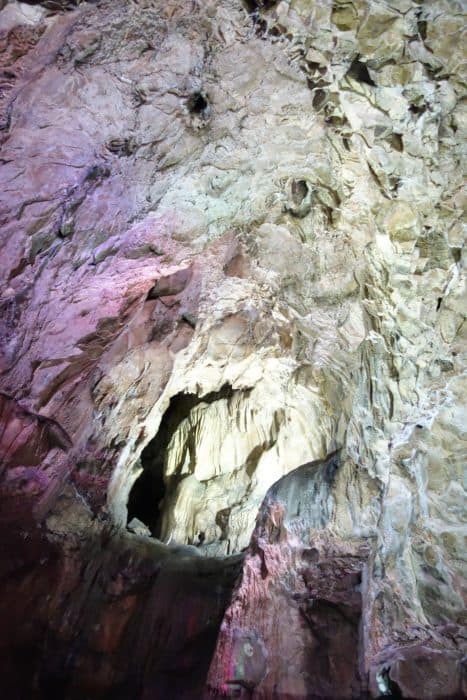 These features are unbelievably old, the flitch of Bacon for example is a huge stalactite hanging from the ceiling of one of the main chambers. At over 6.5 this impressive formation would have taken hundreds of thousands of years to form via the gradual dripping of the surrounding waters. 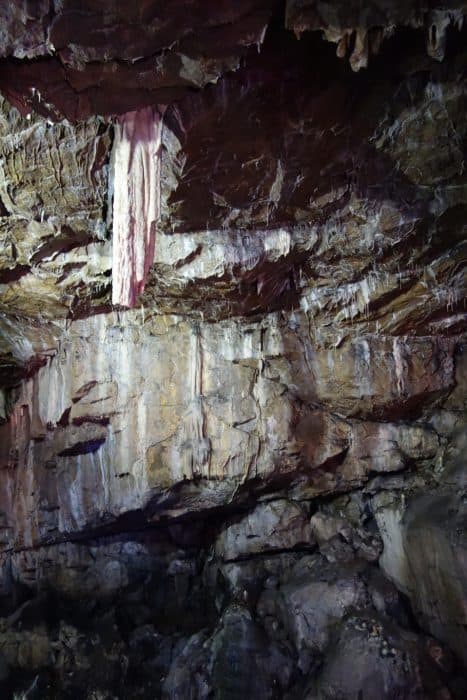 The caves most unique features are the “Poached Egg” formations which can only be found in this particular cave. Their rapid growth, a cm a year, is attributed to the dumping of lime on Grin Low above during the industrial revolution. The leaching of these minerals into the cavern below has created this now protected stalagmites which form a highlight of the visit. 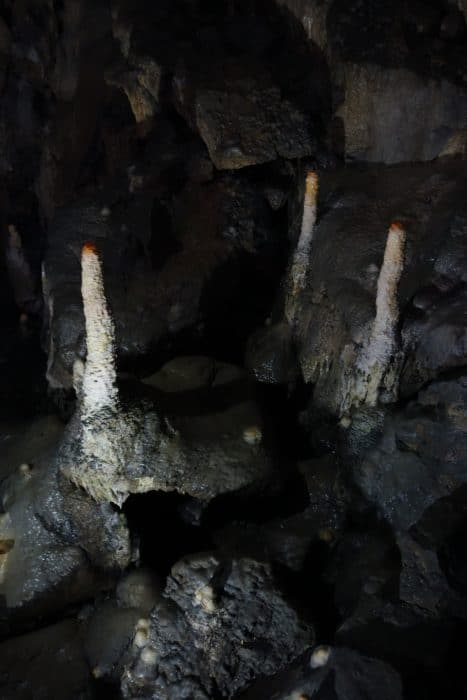 Several explorations and boreholes recently revealed over a mile and a half of unexplored caverns. Professional cavers have been visiting and exploring the system to establish a route into the new section and have recently made a break through into what is know as “Seventh Heaven”. Hopefully in the future we can return as see these impressive finds! 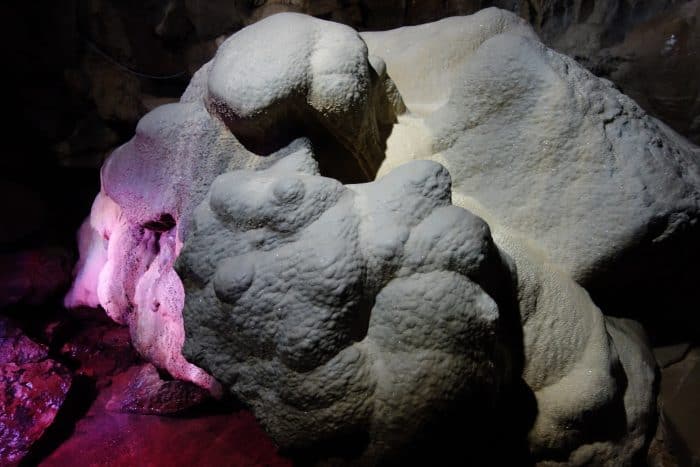 The cavern is open all year round from 9am to 5pm with the last tour taking place at 4.30pm

Tours leave every 20 mins and there is also a small exhibition and cafe within the visitors centre.

Prices are as such:

There are also a number of great walks in the surrounding country park and a Go Ape course to have a go at! 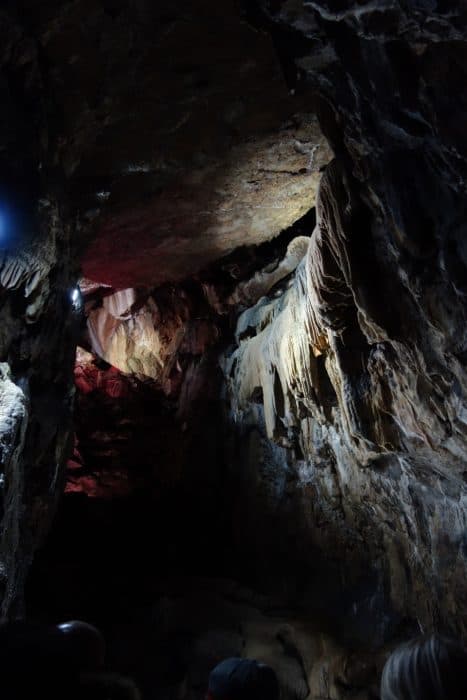 Have you ever explored a similar cave or been to Derbyshire?

More from this country:

Oh, yes if you are in the area then definitely check it out. Some great trails too and GoApe which is always fun, good day out!