Bratislava is a city with a delightful mix of cultures and one which may take you by surprise. The old town and centre of this compact city is, as you might expect for this region, full of wonderful old and detailed buildings which line the cobbled streets. However communism has left its mark on this city and the remnants of Slovakia’s more recent history are still there to be found to this day. For those with an interest in Soviet history and architecture this city is a great place to explore! 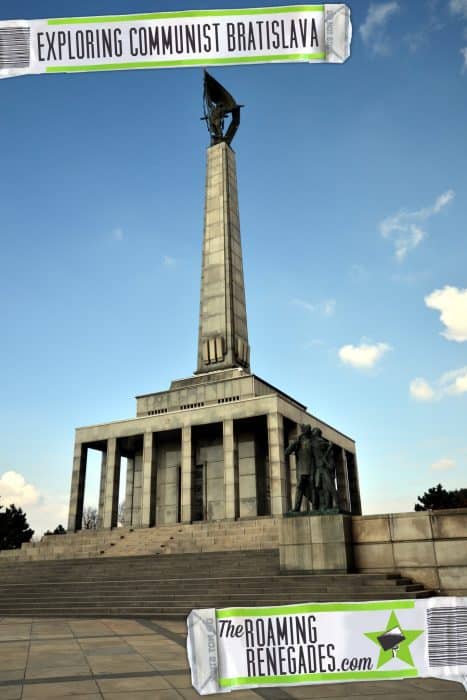 We absolutely loved Bratislava and felt that often times it can be miss understood and overlooked! The city as a whole is quite off the beaten track as it is as many don’t bother coming or are put off my misconceptions. The old town area is just as quaint as any European city with medieval building, narrow cobbled walk ways, ancient city walls and even a huge castle! But what makes Bratislava unique is the contrasting styles which tell the story of the history of this capital city and the country as a whole. 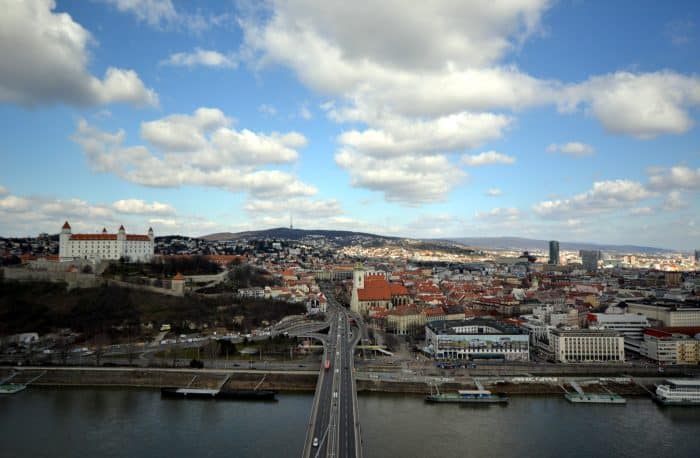 From the fact that it is only an hour away from elegant Vienna and yet for many years was the gateway to the Soviet union, Bratislava is a fascinating mixing pot of European cultures! We also love Soviet history, so what better place to discover some of the weird and wonderful architecture it left behind! 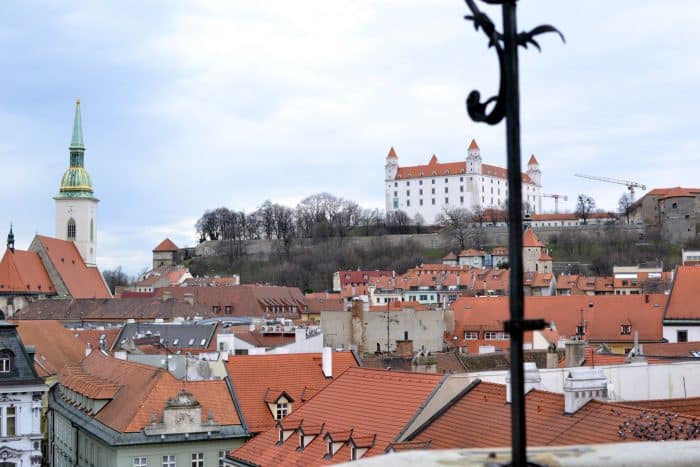 Most SNP (Bridge of the Slovak National Uprising)

This controversial bridge is hard to miss and can be seen from pretty much anywhere in the city. Known my many as the “UFO Bridge” for its striking resemblance to an approaching alien ship, it cannot be missed! Opened in 1972 this bridge is the worlds largest cable-stayed bridge to have only one pylon and from the flying saucer above offers amazing views of this wonderful city. The bridge cause outrage however when it was built as a large portion of the Old Town below the castle, what was the Jewish district, was destroyed to make way for its building. 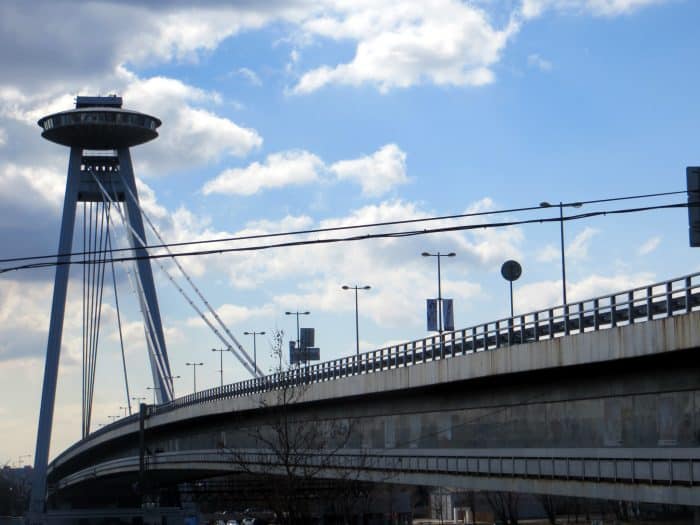 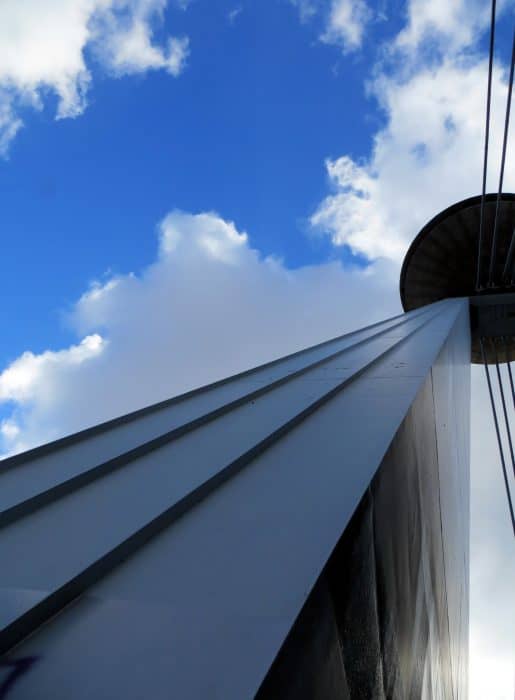 Situated on  the outskirts of this city this soviet memorial and graveyard marks the final resting place of thousands of soldiers who died liberating the city in WW2. Opened in 1960 on the 15th anniversary of the battle the obelisk type construction is very typical of the communist style. With almost 7,000 soldiers being buried here and with the breathtaking visa of the city it is quite a moving place to visit. 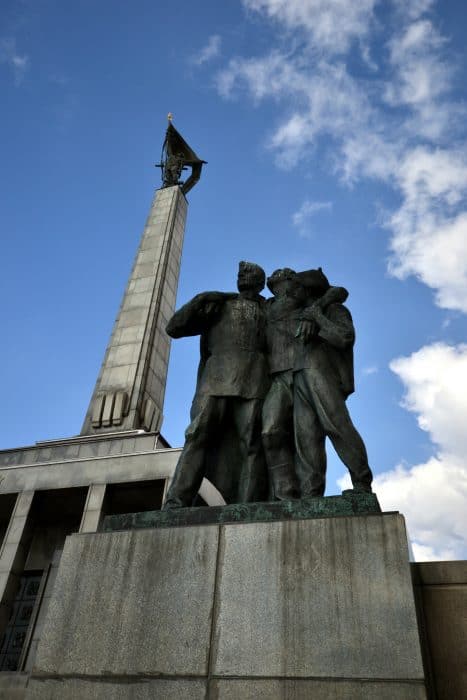 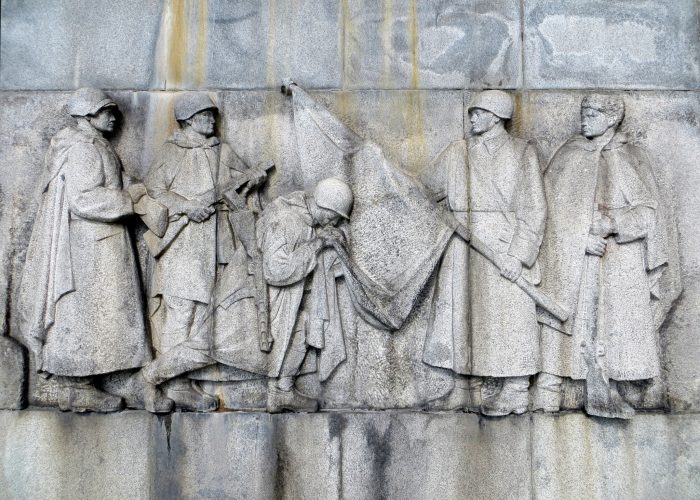 Sitting across the Danube from the main city centre this housing complex is typical of Eastern Bloc city planning and is still home to over 120,000 people! This mass expanse of tower blocks can be seen well from the UFO bridge and from up here you get a sense of the scale of the place. 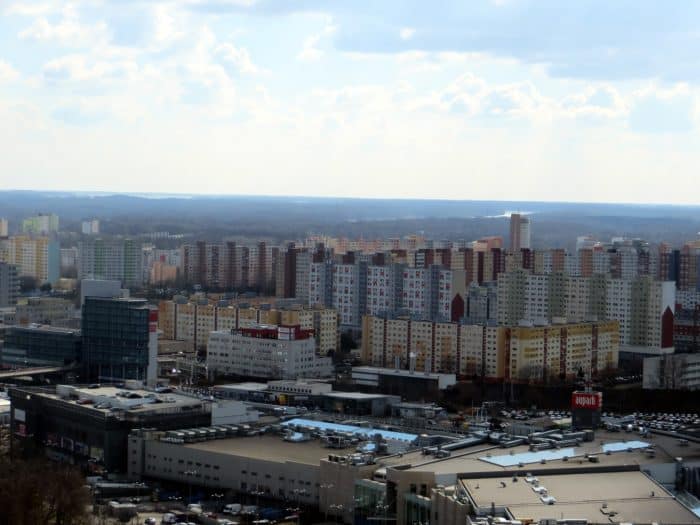 The building of the Slovak Radio

This strange upside down pyramid of the home to a large concert hall and broadcasting centre. Once voted the ugliest building in the world it took from 1967 to 1985 to finally complete! Typical of the strange designs of the Soviet Era it is now an unlikely landmark of the city and despite its striking appearance it is rather unique! 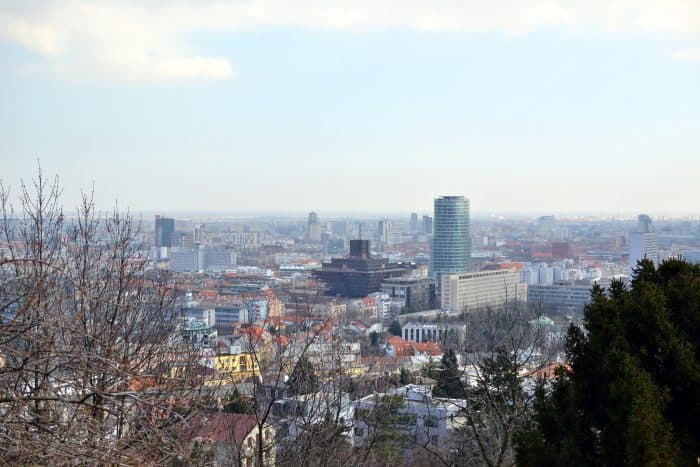 Freedom square (doesn’t get more soviet sounding that that!), or Gottko to locals is a large square near the technical University and post office palace (the biggest in the world!). Known as Gottwaldovo during the soviet era it was named after the first Czechoslovak communist leader, Klement Gottwald. Built in 1980 the fountain in the centre is the largest in the city and was the first square to be renamed in honour of the velvet revolution. 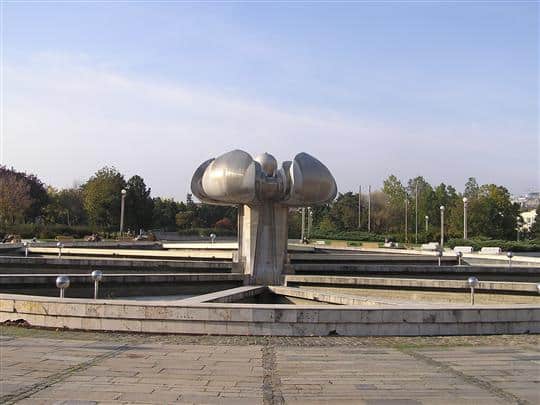 A somewhat non descript building this is a true relic of the soviet era, like many other constructions it took almost 20 years to build as was the lack of funding and stands as a bold landmark to that time. It is seem by main as a symbol of Slovakia before 1989 as it resembles so much of what the city looked like back then. We happened to be staying in an apartment right around the corner from it ! 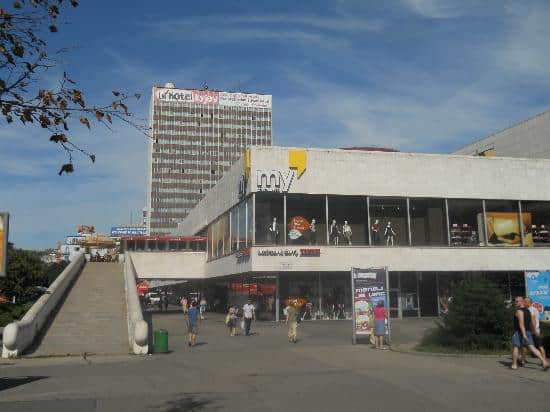 Motifs dotted around the city

For those with a keen eye keep a look out for the several soviet motifs, reliefs and featured dotted around the city. From carvings above doorways to images of men hard at work on derelict factories they are there to be found. In typical state sponsored socialist realism, these example of art work tell the story of the time and heavily promote labour and social order. 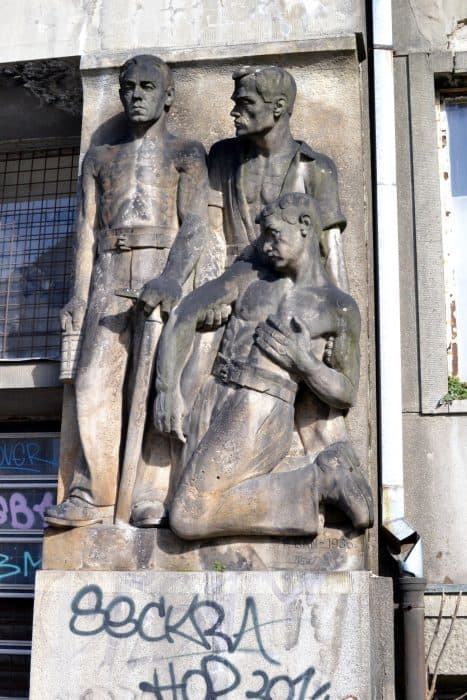 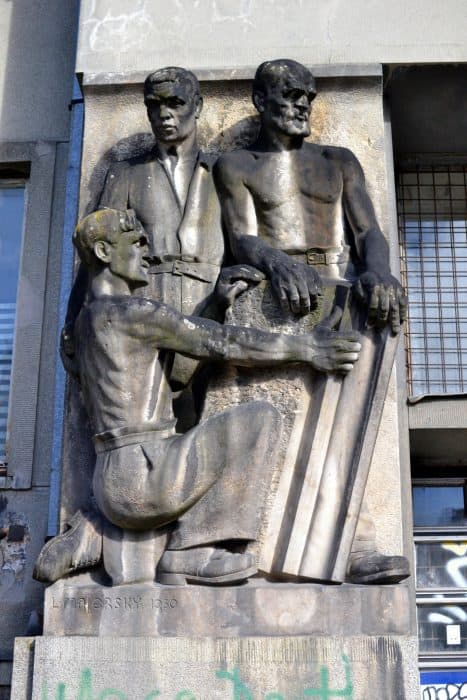 Devin and the border of the Soviet Union

Devin is a short bus ride away on the very edges of Bratislava and Slovakia itself. The town on its own and the amazing ruins of the impressive castle that stands above it are alone a great reason to come out here but it also has more recent soviet history. Here alongside the Danube and looking out across into Austria was the very edges of the Iron Curtain, the gateway to the west and an area heavily fortified and guarded against both escape and entrance. This restricted military zone which ran in front of the castle was only decommissioned in 1989 after the velvet revolution. Today instead stands a memorial to the 400 people who died at this border. 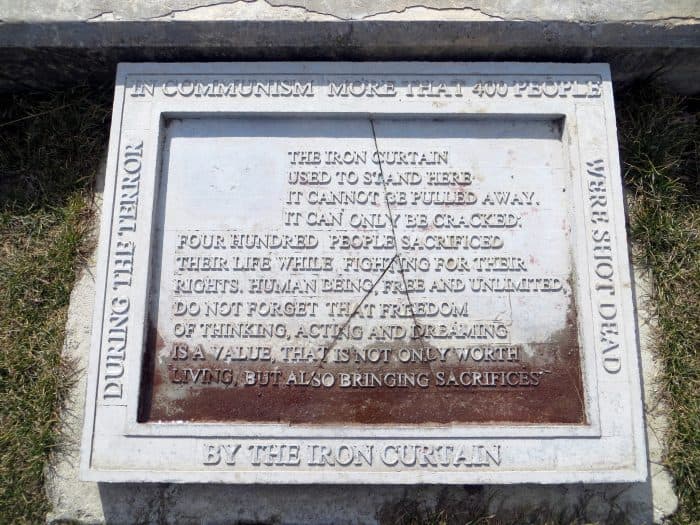 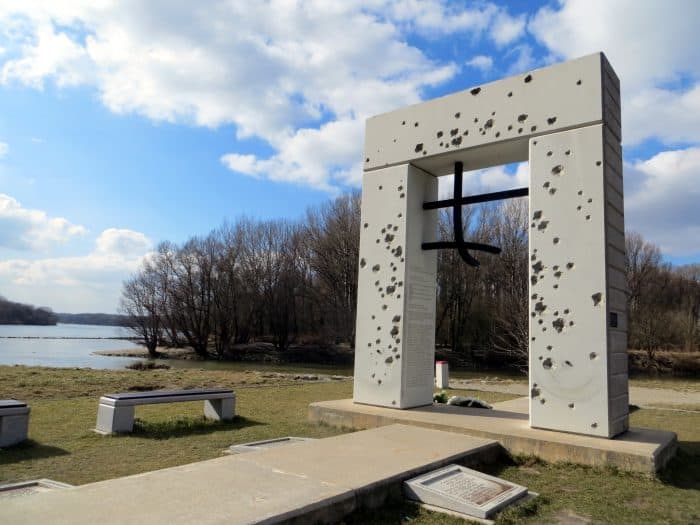 Have you visited any ex-soviet bloc countries or cities? What were the most moving, fascinating or interesting things you saw? 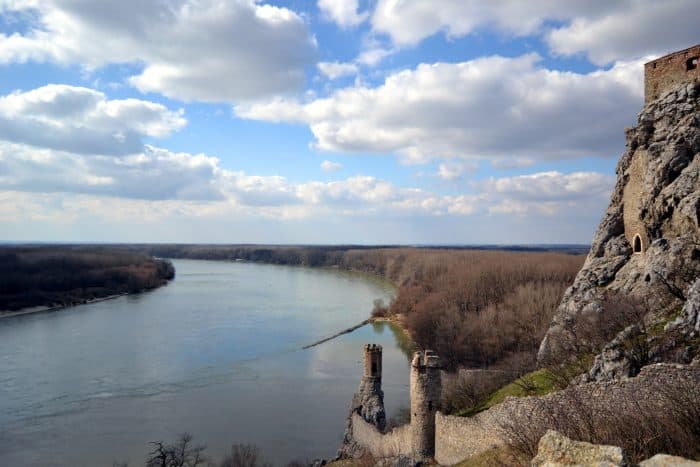 Here’s other posts about Bratislava

A guide to charming and contrasting BRATISLAVA, Slovakia.

Getting from BRATISLAVA (Slovakia) to VIENNA (Austria) and back!

Exploring the ruins of Castle DEVIN on the Slovak/ Austria border.

I like this theme. Bratislava is perhaps one of the most accessible cities in which to explore the former communist block, while at the same time enjoying everything that’s good about Europe (like the beer).

Cheers! Yeah its a really cool city to explore and has a really contrasting style of architecture.

Soviet architecture is really interesting to me. The sharpness of the angles, and the enormous apartment blocks that all look the same. I’m not sure it’s somewhere I’d like to live, but seeing these pictures of Bratislava from the outside is really fascinating.

What was your favourite thing about the city? Thanks for sharing.

Yeah there is just something about it that fascinates us too as well as that period in history. No, its somewhere we enjoyed but we couldn’t live there!
We loved the contrasting cultures within the city, very different but somehow works.
Thanks

I went to Bratislava as a day trip from Vienna a while back. Everyone I met told me not to bother, and maybe their negativity changed my perception of the place, but I wasn’t so keen. You have managed to capture a different view of the place though, maybe more optimistic-looking.

We loved it but I do think it still suffers from a bad reputation. We stayed for about a week so saw quite a lot of it and the many different sides.

What an interesting place. You can feel through your photo’s the history of not such good times and the life they had lived. There must have been such sadness in the people when they were behind the Iron Curtain. Looks like they have come a long way since that time! I did like the “UFO Bridge”, must see that for myself someday!

Yes, lots of history here but the people and the place are overcoming much of that. The view from the bridge is amazing!