Another way to see the city:

The Ljubljanica river which runs straight through the centre of Ljubljana is so beautiful for a city centre river, the colour is deep turquoise and so clear. During our time in Slovenia we saw many river boat cruises sailing up and down the river and thought that this would be a great way to see the city from another angle. Instead of taking one of the expensive river boat cruises, we decided to rent a canoe for a fraction of the price and take it easy at our own leisurely pace, that way we can stop when we want and take as many pictures as we desire. 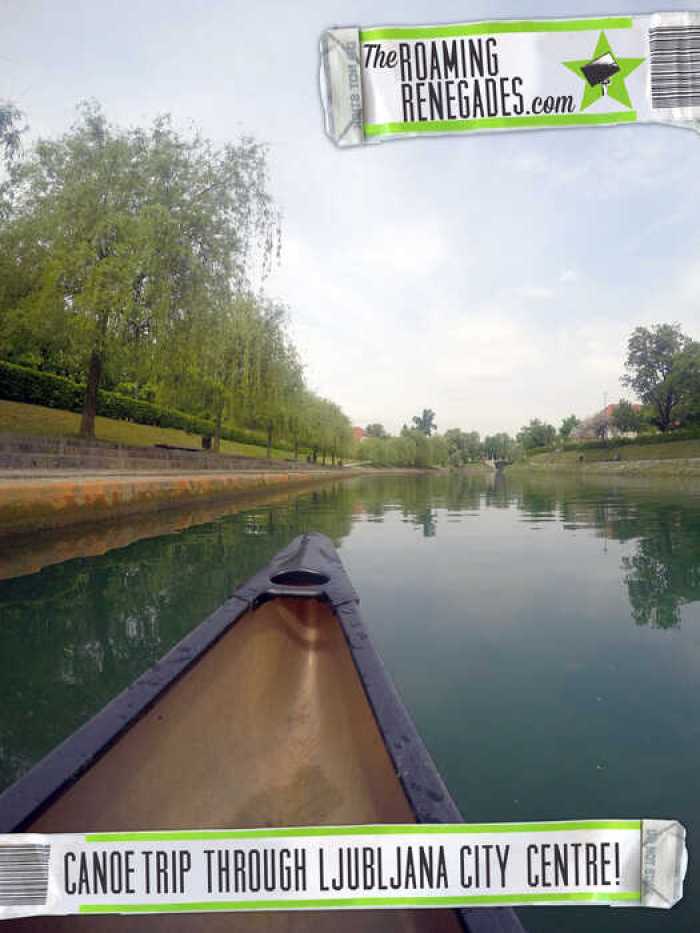 Our couch surfing host told us about the local kayak club which was just around the corner from their apartment, here you could rent kayaks and canoes for 10 euros per hour. We went one morning but everything was closed and nobody was around. We told our host and he got in contact with someone who works there and told him that we would want a canoe the next morning, so he arranged a time for us to meet. 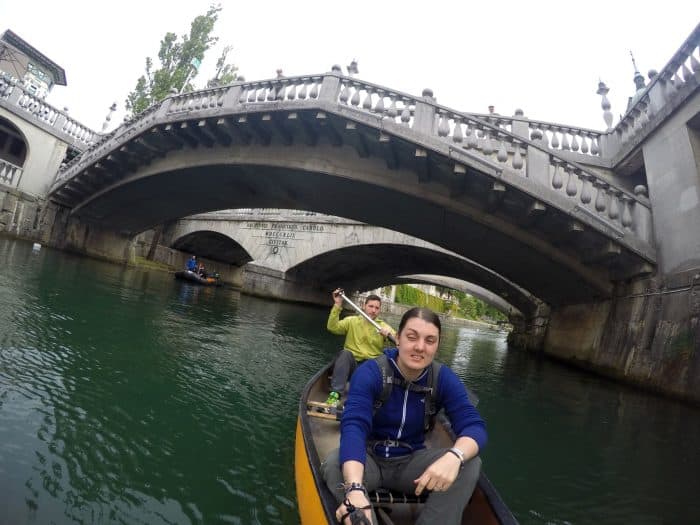 As this was just a local club and not a tourist rental shop, prior arrangements had to be made. So we turned up the next morning and he was waiting there as planned, he advised us how long it should take to reach the city centre and back which was just under an hour, so we asked for 1 and half hours so we had enough time to take pictures, which came to 15 euros. 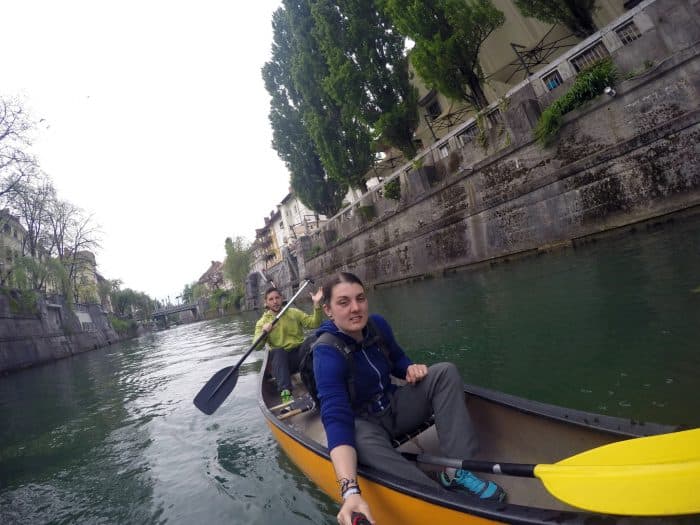 So once we were in the canoe and on our way, Nic pulls out the cameras which then leaves just me to do all the paddling, this always happens when we do any canoeing! Not fair if you ask me but she says I’m rubbish at taking pictures which I obviously disagree with! Now I won’t lie and say I’m gifted at paddling, probably quite the opposite really, and when I’m the only who is doing all the paddling it should come as no surprise that we crashed a few times into the embankment! Once Nic finally put the cameras away and helped, we did make up some ground. 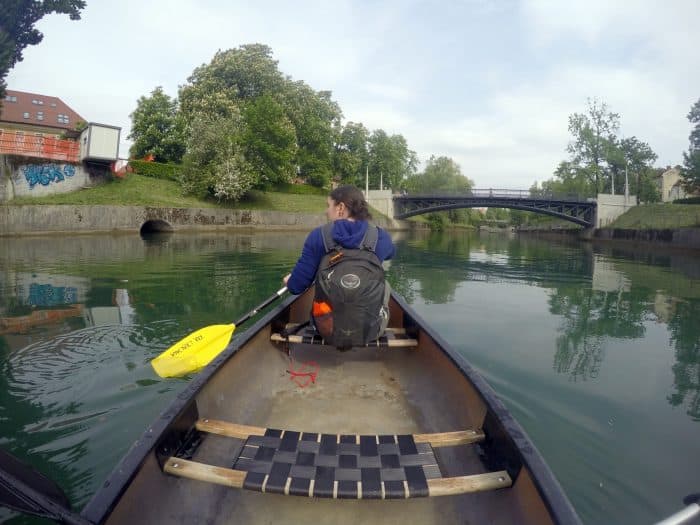 As we were getting close to the city centre we saw in the distance a large plastic bottle floating on the water, it was bobbing up and down before going crazy, we thought it was piranhas or something attacking the bottom of it! It really freaked us out until we got closer and two scuba divers popped up beside it, phew, at least it wasn’t piranhas! 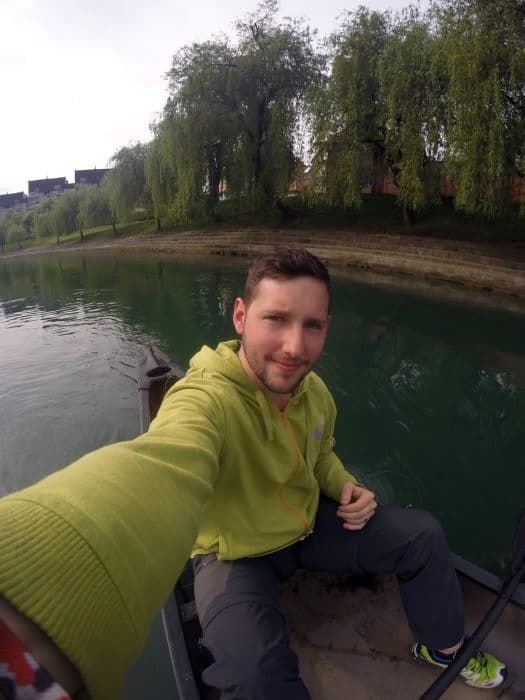 We carried on a little further along and the views of the city from down on the river are fantastic, it definitely gives you a different perspective of this wonderfully green and laid back city. People all along the river banks drinking coffee, sightseeing and shopping, it was certainly a nice relaxing way to see everything. Once we travelled a little further and into the centre under the triple bridge, there was a lot more of these scuba divers that we had to navigate around without hitting them with our paddles! 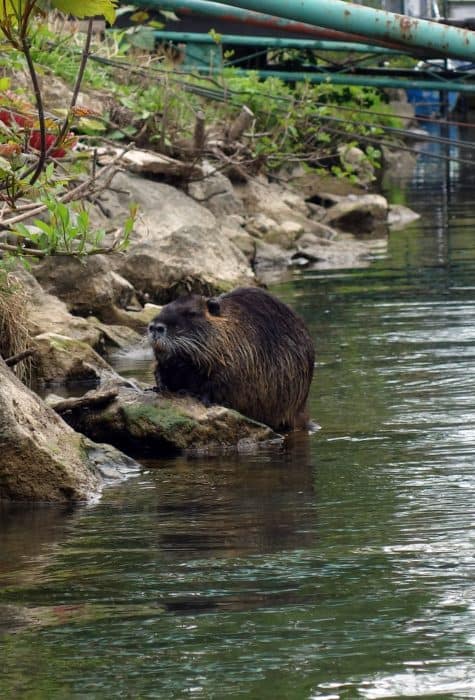 There was also a lot more boats than we had seen before, we then saw a huge crane lifting out old bits of scrap (bicycles, benches, shopping trolleys) from the river, that’s when we realised why there were so many scuba divers. We had certainly picked the wrong time to canoe down the river! Nic again pulls her cameras out and leaves me to paddle, great, the worlds worst paddler trying to navigate both of us around many scuba divers and rescue boats. 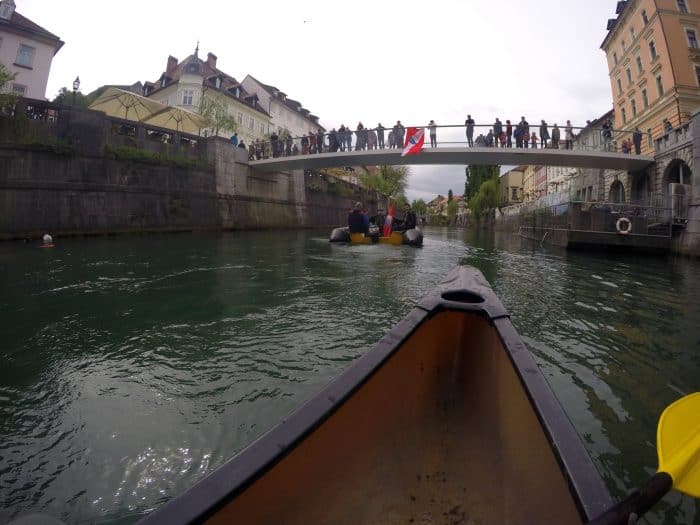 I was doing really well until a police boat hastily came around the corner, he didn’t see us and there was no way I could have paddled out of the way in time, so yeah, we just crashed head first right into the side of a police boat! Luckily we managed not to capsize, but they all turned around and gave us a look of disbelief! To be fair though it was definitely his fault not mine! Everyone up on the embankment was laughing and taking pictures of us. It was embarrassing and what made it worse was that we couldn’t exactly get out of there quickly! We just laughed it off and posed for a few pictures. 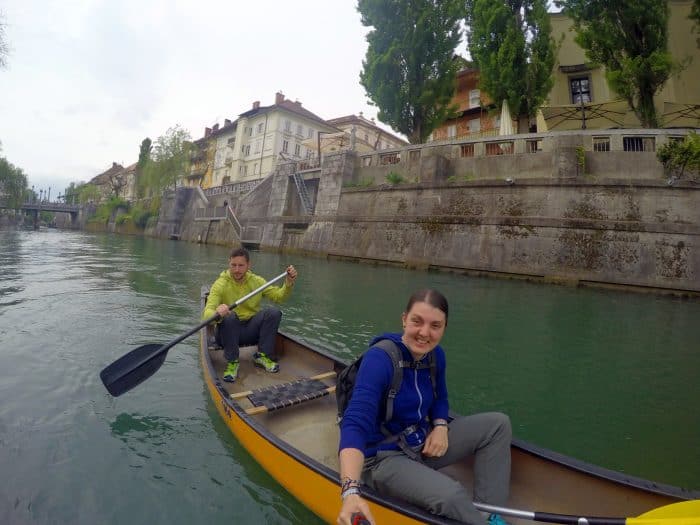 After all the commotion of crashing into police boats we headed back to the kayak club. Along the way we just watched the local people going about their business, we love to just sit there and people watch and it’s awesome from sitting in a canoe too. Just before we reached the kayak club, we saw some nutria, also known as coypu or river rat, they’re look like beavers and are quite big with long thick rat like tails, but they are really cute. We paddled over to one of them to get a couple of pictures before it jumped in the water and swam away. Afterwards once we were out of the canoe, my arms were sore, I don’t think Nic could say the same as not much paddling went on where she was sat! So it sure is another good way of keeping fit whilst sightseeing.

We will definitely be doing more canoeing on our travels and hopefully some kayaking too.

How to hire a canoe in ljubljana

Address:
Marinovševa cesta 8a 1000 Ljubljana
Phone:
+386 1 513 65 30
www.kajakklubtacen.si
Ring ahead or email to organise a time in the morning when the club is open.

Have you ever Canoed through a city

Sounds like a great day, and cheap! Running into the police boat will always be a great travel story.

Yeah we had so much fun doing this and it is a great low cost activity! Ha ha, yes!!

I have been to Ljubljana several times, but never did the river kayaking…Thanks for sharing all this great information!

0
Reply
The Roaming Renegades
Reply to  A Datsev

Something for your next trip maybe. 🙂 cheers