Malham cove is an amphitheatre of stunning white rock, a powerful show of natures force as well as being one of the most legendary sport climbing venues in the UK. Add to that the fact that Harry Potter was filmed up on its famous limestone pavement and you have an ancient wonder of the British Isles which still fascinates, challenges and wows in the modern era. After spending the day climbing at another crag (Malham is the hardest in the country!!) in the little village of Settle in North Yorkshire it seemed rude not to call in at this mystical place. The 260ft curved natural limestone cliff was originally a colossal waterfall tumbling into the valley floor below as a huge glacier melted above it. The centre section of the cove was subsequently more eroded than its edges thus creating the 1000ft wide characteristic curve. Malham Coves lies at the head of the idyllic valley below which was formed during the last ice age when the ground was frozen. When the climate warmed and area thawed 12,000 years ago the river flowing over the cliff face disappeared underground into a large and complex system of caves thought to be around 50,000 years old. The once roaring river which fell over the cliff is now a stream which flows out of Malham tarn over 2km away on the Yorkshire moors. This then drops underground over a mile before the cove. The stream at which emerges from the caves below the cove is actually Malham Beck which continues to flow at a gentle pace through the valley floor. One of the most mind blowing things about this place and in fact any limestone really is how it was formed. The Carboniferous limestone here was formed around 350-250 million years ago from the shells and skeletons of sea creatures deposited on a topical sea bed, this fossilised to form the grey hard rock we find today. Tropical sea you say? Doesn’t sound much like Yorkshire to me! That’s because the limestone here was actually formed under the sea near the equator and with the drifting of the continents ended up in the Yorkshire dales…crazy! In modern day Britain Malham Cove is a tourist attraction which brings floods of visitors from all over the world each year. It’s imposing face and limestone pavement above has captured the imaginations of generations of intrepid visitors as well as the peaceful and picturesque surroundings of the Yorkshire Dales National Park. The well known beauty spot is also part of the famous Pennine Way which runs 267 miles from the Scottish border south through to the Peak District in Derbyshire and is popular with hikers. Our own village of Littleborough also lies below a section of “The backbone of England” and we regularly hike up there to visit the many natural and quarried climbing crags. In fact this same weekend that we visited Malham and Settle we also climbed up on the Lancashire Pennines (Post coming soon!) But what Malham has become most famous for over the past few years is Harry Potter. Scenes from the Deathly Hallows (Part 1) were filmed up here in late 2009 which just adds to the mystical and other worldly feel of this amazing place! 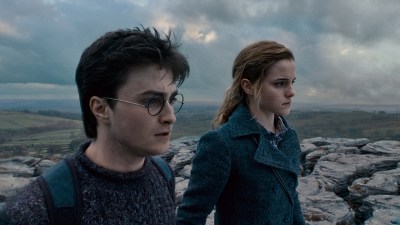 It would be rude of me not to at least mention the climbing at Malham…seeing as we are climbers! Malham is pretty much the mecca of sport climbing in the UK (climbing with bolts drilled into the wall for protection). Over here unlike in many parts of Europe and the US Sport climbing is quite rare and most crags are traditional climbing (placing your own protection in cracks as you climb). Malham does play host to both forms of climbing but is famed for its hard, long and technical sport climbs up the middle of the cliff face. Here you will find the hardest sport climbing in the country and some of the best climbers from all over the world including Chris Sharma and Adam Ondra. We actually spent the day climbing at a slightly smaller limestone sport crag nearby in the  village of Settle. We are much more accustomed to Trad climbing than Sport and also didn’t have a guide for Malham’s routes so this crag was a good introduction into outdoor sport (indoors is always sport but also very different!) We were really inspired after calling in at Malham though and hope to come back over this way with a guidebook and climb on it’s famous cliff face! Visiting the crown of the Yorkshire Dales

I have in fact actually visited here before, when I was 8 years old with my Grandad and remember it vividly. I always wanted to go back here to see whether my childhood imagination and distant recollection was correct and this place really was as magical as I remembered. Well it really… Our visit was not the full day hike many take but as we found ourselves only 6 miles away from this magnificent place we couldn’t resist a revisit. We drove over the winding roads of the Yorkshire dales dodging the sheep and bulls which roam this dramatic landscape. The cove came into view in the distance, the white wall reflecting the sun in this sea of green. We hopped over one of the fences and down the steep sheep filled field towards the cove cutting out most of the route from the town. Following the gentle stream through the tree lined valley we arrived at the mammoth cliff and straight away spotted a few climbers clinging to it’s razor edges! The hike up to the top of the cove is quite a strenuous one and by the time we got to the top we were gasping for air! But it was the scene of the limestone pavement and the jaw dropping view beyond which really took our breath away. Sitting on the edge of the cliff we enjoyed our well deserved sandwiches after an amazing day climbing and exploring beautify and exhilarating Yorkshire! Most make the 7.2 mile loop hike around from Malham town to the cove, Gordale Scar, Malham tarn and then back around. This usually takes around about 3 hours. However it is possible to walk to the cove and back again from Malham town which is about a 1.5 miles away. Parking is tight and it is advised that you use the Yorkshire Dales national park down in the town itself. The footpath from there is well marked. Good footwear is also advisable, especially in bad weather as the rock can be slippy. The cove is of course FREE to visit too!

More info and a map of the route: Have you ever been to Malham Cove? If you are heading over to visit the UK why not head north and check out our amazing countryside!